Yep, in addition to a collection of amazing Arctic Cat vintage race sleds, Tom, Nancy and daughter Brianna Ische have quite an assortment of memorabilia.

I dig the Kirk and Tucker Hibbert-edition ZR racers. Especially the Tucker version (right), because it’s a good replica of his 2000 X Games winning Mod Sled, rather than just a stickered-up version of stocker. 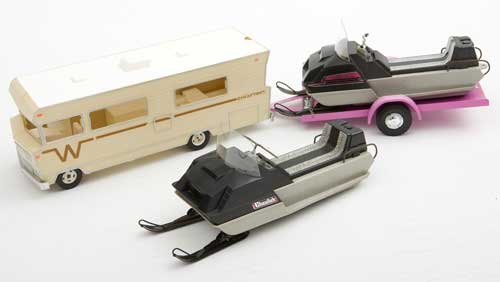 How about some of the original Arctic Cat toy models, including this Cheetah and Panther, along with the Winnebago RV and trailer. I guess they didn’t quite get the scale correct between the sleds and the RV.

Also, did people really use their RVs to go on snowmobile trips? I’ve seen magazines do “that story,” but I think they were simply trying to court RV advertising (or looking to get the free use of an RV during the winter).

Cool Cat bling, from long before we called it bling.

The classic Schmidt beer can with the Arctic Cat Panther, dwarfed by the monster beer stein from the early 1990s.

Another classic… the lighted wall clock with the Jim Dimmerman insert.

I’d pay a lot more attention to the time if I could look at a clock that’s this cool.

I can’t wait for the days when this baby is 40 degrees cooler than the indicated temp. Not too many more weeks.

Before Action Graphics, before Daniel Paul’s, there was custom vinyl for your sled (or boat, camper, etc…) registration.

I Believe in Movin’, and I believe This is the Year of the Cat. Really.

Not memorabilia, rather actual NOS Arctic Cat parts. But somehow the boxes make it look like memorabilia to my eyes.

I would look Bonevalent wearing one of these babies. So cool!

That’s if for now, I’ll post more of the Ische collection sometime soon, including some sleds that didn’t make it into the book.