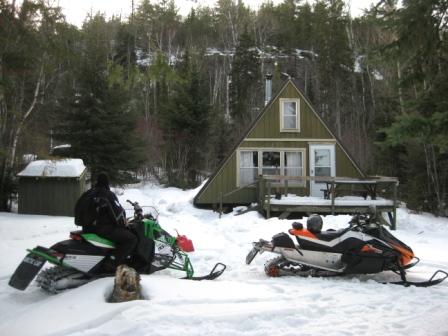 Last weekend, my brother-in-law and I hauled a load of lumber to the family cabin on North Fowl Lake. Dean’s dad and uncle built the cabin in the early 1970s, and it’s served as an awesome remote retreat ever since. Only two ways of getting to this place: via snowmobile in the winter, or via boat in the summer.

In recent years, our families have gathered here around New Years, snowmobiling the trails in Minnesota and the untouched logging roads of Canada.

A border lake of Minnesota and Ontario, Fowl is part of a chain of lakes that serves as the basis of a REALLY cool ride, skirting the BWCA Wilderness and through some very wild country.

We’ve talked with our local-to-this-area friends Eric Nelms and Andrew Romu about the route many times, but this was my first opportunity to actually ride it. Because many of these lakes need extra time to set good ice, this route is one that shouldn’t be tried until mid-Feb. 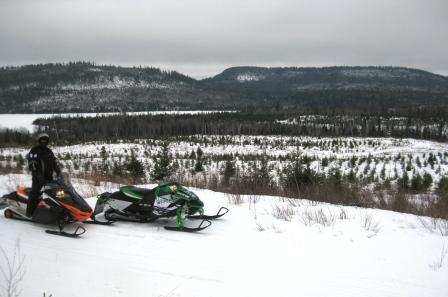 Here we are just a few miles into the ride, having come off the west end of Moose Lake (seen in the distance), going north into Canada along old logging roads.

There are no marked trails on this ride. It’s either lakes, rivers, old logging roads or portages. Navigating unfamiliar territory requires a bit of map reading, a bit of freelancing and a bit of experimentation. Kinda like some kinds of mountain riding. 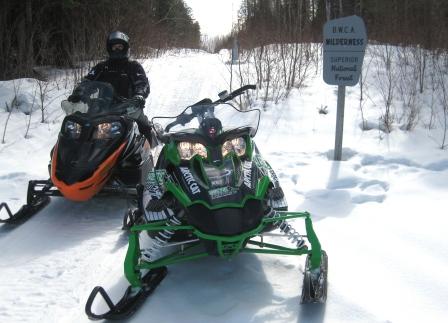 Also similar to many mountain riding areas near federal Wilderness, the border lake route we took had the added intrigue of being the northern edge of the Boundary Waters Canoe Area Wilderness. On most of the border lakes that we rode, the Minnesota side constitutes the BWCA, which is off-limits to snowmobiles (or any mechanical devices). So we were careful to stay on the Ontario side, lest a helicopter swoop down and nail us with a $400 ticket.

The photo above is taken near the Height of Land monument between North and South Lakes. To the right of this sign is BWCA/Minnesota, to the left is Ontario and legal riding. It’s never made much sense to me, along with the motor rules on Fowl Lakes (10hp limit on the U.S. side of the lakes, unlimited hp on the Canadian side).

If you’ve never seen this area of Minnesota and Ontario, it’s covered with all sizes of deepwater lakes, vast coniferous forests and lots of exposed granite cliffs. It’s the closest thing we have to mountains in Minnesota, and I recommend the experience to anyone. In the photo above, we’re heading south from Arrow to Rose Lake, early in the journey.

I’ve paddled many BWCA lakes in the summer, which is equally compelling and adventurous as wintertime sledding in the adjacent areas.

Below is a 1-minute video of the portage trail between Rose and Arrow lakes, illustrating the beauty and ruggedness of the border lakes region.

The big cliff that you see at the end of the above video…were standing atop it in the photo below. This is one of those rare moments that Dean shows affection, because he’s usually a little too chaffed that I’m always stopping to shoot photos.

Late winter in this region brings out the ice fisherman. I met these two guys on Arrow Lake, where they’d snatched four tasty-looking lake trout in an hour’s worth of angling.

We usually stop and talk with the people we meet on lakes to ask questions and compare stories. It’s interesting, because these conversations usually lead to new “trail” discoveries.

I love every kind of snowmobile experience, but fundemental to most of them is the sense of adventure. And when I ride in the fast wild of the border region, there’s ALL KINDS of adventure.

The border portion of this route ends at Gunflint Lake, the north and east side of which showed the stark evidence of the infamous Gunflint fires that raged through this area in May, 2007. 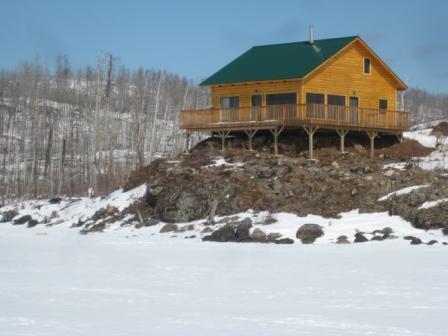 Proof that hope springs eternal (and that fires have been a part of this area for centuries), there were some fancy new digs that have already sprung up on the Canadian side of the burn.

It was a little bit weird to go from no-man’s land to Gunflint Lodge, where a boot-hockey game was in full swing. An afternoon wedding at the lodge meant no-food for us, so we pressed onward, down the Gunflint Trail, to Trail Center, where we ate like kings. We were going to take Minnesota trails back to the cabin, but with the smooth lake running and excellent adventure beckoning, we opted instead to take the border route again. Good choice. 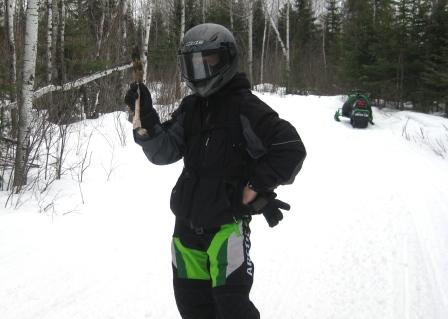 The theme for our ride back to the cabin was “Wolves.” LOTS of evidence of famed creatures in this region, including the remnant deer leg that I found on the trail. 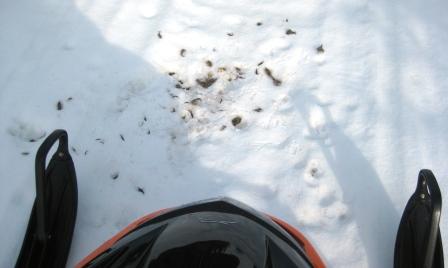 And some trailside scat that featured lots of animal fur.

The best find of the day though was this moose skull, in the area just north of Moose Lake as luck would have it. We’d ridden past this exact spot five hours earlier, and there was no skull. Upon our return…Bullwinkle!

We didn’t see any live moose or wolves on this trip, but we typically see moose and occasionally see wolves.

We ended the day with 159.5 miles on the odometers and lots of great memories. This was probably my last ride for the season (although a late-March blizzard hit today, as I write this, so maybe my season was extended), so there was an element of sadness to the ride.

It’s been a great winter here in Minnesota (and for anyone who still wants to savor it, I expect there will be good riding in the border region for at least another couple weeks). And this was an excellent ride to end it for me.