Leroy Kapsner (L) and Leon Raiter were integral to the styling of all the products produced at Arctic Cat during the 1970s and early ’80s. Leroy managed the Styling Department, and Leon was one of the principal stylists.

On Saturday, they accepted the invitation to spend the afternoon at Thomas SnoSports, an Arctic Cat dealership in Ogilvie, Minn., talking about their years at Arctic Cat.

Tom Rowland, owner of Thomas SnoSports, had met Leon at the Arctic Cat 50th Anniversary in the summer of 2011 and maintained contact with him since. This past summer Leon stopped by the dealership with a box of his original drawings, which buckled Rowland’s knees for the sheer historical significance.

Always one to share his passion for Arctic Cat history, Rowland asked Leon if he’d return on another day, when a few of Rowland’s friends were there to share in the experience.

Leon (L) agreed and, as a huge bonus, brought Leroy with him (as well as boxes of original Arctic Cat artwork, pictures and artifacts). 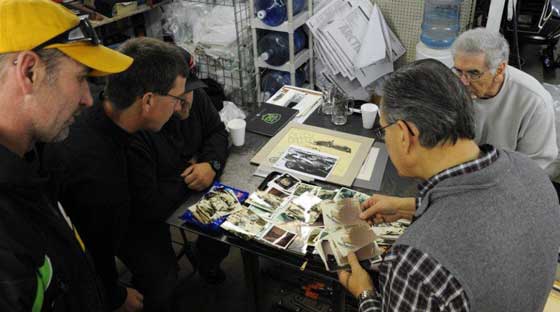 The gasps and schoolgirl-like-giddiness began the moment these guys pulled out their treasure.

Photos and drawings of prototype snowmobiles (many that we’d never seen) were passed around, along with the stories of their creation.

The scene contained equal parts time-warp, discovery and reminiscing, with an overall mood of discovery.

I realized something at the Arctic Cat 50th celebration, the CPC Revisited series, during the recent Jim Dimmerman stories about Phantom and again this day with Leon and Leroy: there is still so much history about past Arctic Cat events, snowmobiles and people that HASN’T yet been told! And fortunately, most of the people that know this yet-untold history are still around and able to share. But that window of opportunity won’t stay open forever, and I appreciate those who allow me to gather share this stuff here on ArcticInsider and in other projects that might someday bubble to the surface.

Personally, I’m as interested in the people as much as I am about the snowmobiles and other machines. And like nearly everyone I know from Arctic Cat’s past and present, Leon and Leroy are great, humble and a little bit surprised at how much the rest of us enjoy their stories and contributions to the Arctic Cat story.

For some historical context, here a shot from a 1976 edition of the Arctic Circle newsletter showing Leroy (L), Leon (R) and Mike Hornai (middle) in the Styling Department at Arctic Enterprises.

Like Leon Raiter, Mike Hornai (L) was HUGE influence on the amazing snowmobiles (and other products) of the era.

Together, these two talents created some of the most-loved, classic Arctic Cat snowmobiles of all time. Their job was to conceptualize snowmobiles, graphics, dash panels, seats, packaging, snowflaps, etc…

Really, the visual element of any product was within their domain. And they were masters of their craft. Some of their designs were so impactful and lasting that their influence is still reflected in Arctic Cat products of today.

That’s Aaron Scheele wearing the yellow cap, Tom Rowland reaching for the photo and Mike Fanum on the far-right.

One of the first hoods that Leon Raiter designed was the the 1972 Arctic Cat EXT. Here are some of his concept drawings for what would become this all-time classic snowmobile.

How did those sketches turn out? This image of a ’72 650 owned by Tom Ische gives the answer: AWESOME!

Ever the sleuth for details, Rowland brought out the magnifying glass to coax more information from the dozens of drawings and photographs spread out on the work table at his dealership this day.

Flanked by his daughter Valerie and granddaughter KayLee, Leon holds up two of his classic creations.

Great side-story: Leon is the guy who “brought” the el Tigre name to Arctic Cat. Back in the day, Arctic Cat had a company contest to name an upcoming high-performance snowmobile. At the time Leon was reading a book in which there was a character named El Tigre. He submitted it and the rest is history (including a lawsuit filed by J.C. Penny a few years later claiming ownership of the name, which was eventually denied).

When model names are chosen, someone has to create the artwork for it. Obviously back in the 1970s there weren’t computers with thousands of fonts that could be tweaked and manipulated in mere moments. Instead, artists created their own fonts and designs like the two shown here.

When I think about how long these two versions of artwork have been burned into my own mental hard drive and how many machines they’ve graced over the years, I’m simply in awe.

I’m going to end Part I here, as the introduction of sorts. I’m not sure yet if there will be two or three parts to this series. Either way, I think you’ll like what Leroy and Leon had to share.

Thanks for reading, check back soon for Part II.