More Tech Pix and Descriptions of the 2012 Arctic Cats

There’s so much more to explain about the 2012 model year Arctic Cat sleds, here’s a brief overview of just some of it.

The tapered two-piece tunnel design adds greater rigidity to the rear of the chassis, while the tapering significantly improves the ergonomics and leg comfort. The top of tunnel is 15-in. wide (compared to 16 in. on the Twin Spar and 17 in. on the ZR), while wider at the footrests, which maintains the sled’s narrow feel without sacrificing track clearance. This is something I absolutely noticed, and 100-percent approved of. The rear tunnel section of the ProCross chassis is concave to allow snow to flow on top of the rear heat exchanger, offering increased cooling.

Greatly influenced by the Sno Pro race sled, the one-piece forged ski spindles are taller to reduce forces/loads into the spindle, and to allow a longer distance between the upper and lower A-arms for added chassis strength.

Arctic Drive System (ADS): Diamond Drive is gone, replaced by a new chain and sprocket design, all of which is part of the new ADS. It includes a larger 10.75-in. diameter driven clutch, a longer center-to-center distance (12.2-in. on the 800s, 11.5-in. on the 1100s) than the previous 10.5-in. c-to-c, and is reverse-capable on the 4-stroke snowmobiles (a push-button system that actuates a a solenoid to shift the gears).. The brake rotor remains on the driveshaft.

The big news here is a new development called the Torque Control Link (TCL) that serves as a fixed C-to-C distance, coupled with a bearing design on the chaincase side that allows 5 degrees of movement. With the system, the engine and jackshaft (and thus both clutches) are connected to maintain a fixed distance and always parallel regardless of torque, improving performance and increasing belt life.

Chaincase itself is made of magnesium for a 36% weight reduction compared to aluminum. The oil reservoir/tank is incorporated into the chaincase cover, reducing parts and weight. A new self-adjusting chain tension is cool and creative, eliminating over-tensioning.

Arctic Cat is calling the latest generation front suspension ARS (Arctic Race Suspension). It combines tall ski spindles and widely-spaced upper/lower A-arms for the greatest torsional rigidity and strength. The A-arms mount to the chassis in a 30-degree angle from the chassis centerline with optimal caster/camber spindle angles to improve comfort and cornering traction while reducing bump/steer. The one-piece spindle construction with ball-joints eliminates the added weight and stiction of spindle-in-housing designs. 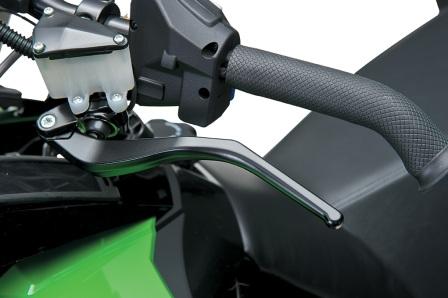 While Diamond Drive is gone, Arctic Cat wanted to keep the brake rotor/caliper on the drive shaft. Yet they also wanted more powerful braking force than the previous design, so with its brake partner (Hayes), they developed the Radial Hydraulic Master Cylinder Brake System: the master cylinder’s bore is perpendicular to the handlebar (instead of in-line with the handlebar like typical systems). The result is more positive stroke for a given distance of lever movement, improving braking power.

The dual-piston caliper is mounted on the front of the disc, rather than on-top, so that any chassis flex won’t push the brake pads/pistons back into the caliper (often called “knock-back”).

The rotor itself is 12% larger in diameter (yet also 6% lighter), which delivers better braking performance with less effort.

I’d characterize the braking feel somewhere between the Wilwood jackshaft version on the Sno Pro/ZR sleds and the Hayes/Wilwood system on the Twin Spar sleds. I heard a few editors complaining that the brake worked too good, to which I say there’s no such thing. 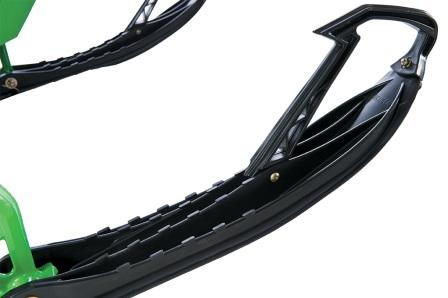 Lighter, with an increased keel depth for increased cornering traction. It also features molded-in “gripper” traction on the top side and a new ski loop design that is stiffer and provides better hand ergonomics.

Available on the M800 Sno Pro, XF High Country and HCR only, the quick-adjust Telescoping Steering system allows riders to quickly adjust handlebar height within a four-inch range (there are 12 positions with 3/8-in. increments), using a simple hand-operated locking collar. Tall enough to eliminate the need for a 10-plus-10-equals 20-in. handlebar riser? I’ll ask Dude.

A stouter, triangulated front chassis enabled the use of a simplified, single bell-crank, replacing the previous twin-bell rack design to reduce the amount of “free play” that can develop during use. Turning radius is sharper than both the Twin Spar and M Series. 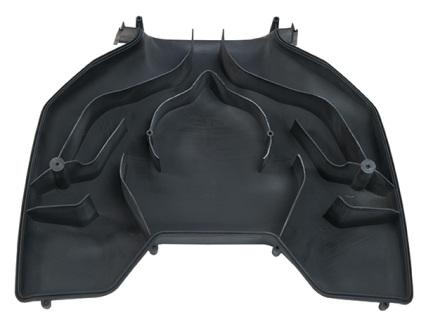 Hood-Integrated Air Box: The center portion of the “hood” is also the airbox/intake system. Multitasking… I like it.

Intake is at the rear of the hood.

The XF skid comes with either a coil-over Fox Zero Pro or Fox Float rear shock. Tri-hub rear wheel assembly is said to be lighter and mor durable than the standard four-separate-wheels design.

That’s it for now. More pix and info next week.