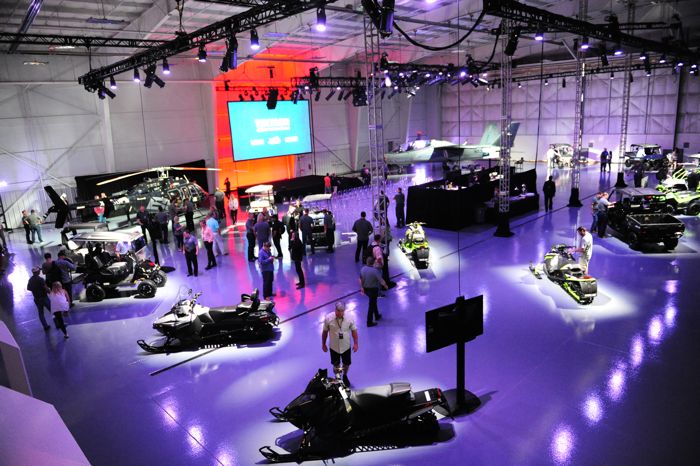 In the three months since Textron announced its intention to buy Arctic Cat (and the six weeks since the sale was finalized), the brand’s loyal legion of riders, dealers and employees has wondered what the future would bring. Last week, Textron Specialized Vehicles gave us a good glimpse of that future during a powerful presentation to its dealers about both brands, their synergies and the promise they offer for the future.

At that event, I sat down with John Collins, Vice President of the consumer business for Textron Specialty Vehicles, to ask some key questions about the future of Arctic Cat as part of the company. 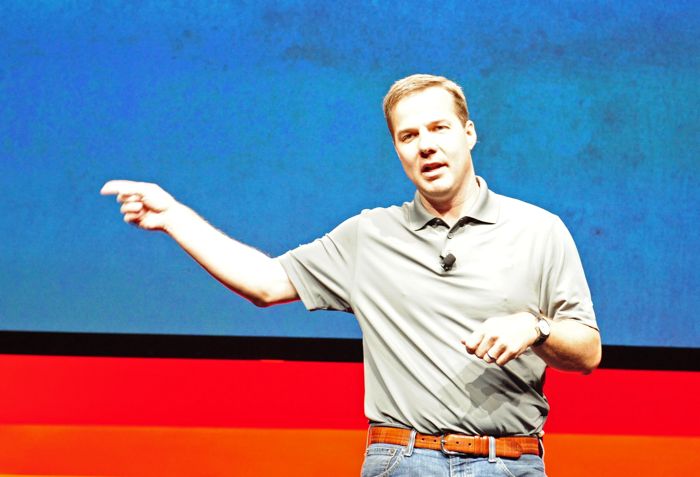 AI: That was a great presentation today John. I’d like to follow it up with some specific questions that will give Arctic Cat fans some insight into what they can expect from the brand they love. So let’s start with the brand…Textron will preserve the Arctic Cat brand for snow, but change it for dirt. Please explain that.

Collins: We will absolutely maintain, invest in and grow the Arctic Cat brand for snowmobiles. For the dirt products, we’re transitioning it to Textron Off Road, but we will maintain all the strong sub-brands, including Alterra, Wildcat and Prowler. Plus we’ll add Stampede, all under the Textron Off Road brand.

We didn’t take lightly the decision to transition Arctic Cat’s dirt brand to Textron Off Road. Ultimately, we believe the change is the best thing for the company and dealers.

That said, there are some sacred, holy names that we would never change. Arctic Cat snowmobiles and E-Z-GO golf cars are two of them.

AI: What were the reasons to stop using the Arctic Cat name on the dirt products?

Collins: Arctic Cat has strong brand recognition for its dirt products in the northern half of North America, but it isn’t nearly as strong in the south. In fact, there’s a disconnect with the word “Arctic” for a lot of people in the south. So to grow the brand like we want, we believe that it’s more important to concentrate on the sub-brand names, like Wildcat and Prowler.

Plus, we’re putting all of our wheeled products — including the Textron-developed Stampede sub-brand — under one brand name. It would be clumsy to offer dealers and customers the Arctic Cat Wildcat, Prowler and Alterra models as well as the Textron Stampede. That makes it seem like it’s two different companies, which they no longer are. We’re one company now. And machines that we’re developing for the future need to come from, and live under, one parent brand.

Those were the primary reasons why we’ve changed the name. We certainly acknowledge that this is a shock to some people, and tough for some to hear. That’s understandable. It was a hard decision, but one that we made carefully after talking with many dealers and customers. It’s the right decision for the company, and it will make more sense as we go forward. 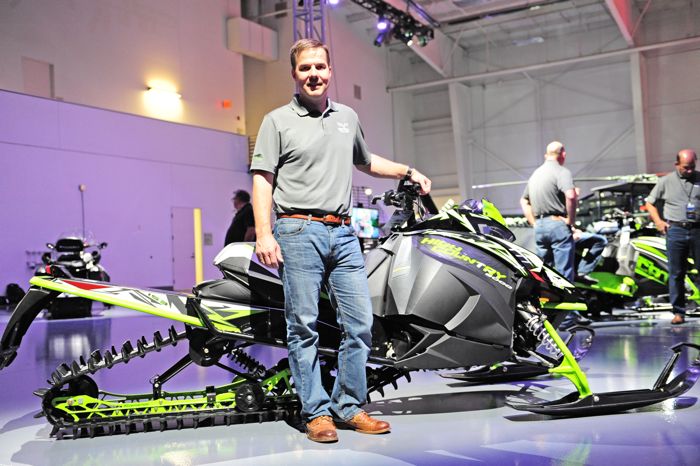 Collins: Absolutely. We know that Arctic Cat personnel know snowmobiles as well or better than anyone else in the world, and the line that was announced at the recent snowmobile dealer show reflects that expertise and knowledge. We’re excited about everything the snowmobile group has coming in 2018 and beyond, and we’ll continue the investment in product development in technology and progression.

We’re committed to the product plan that Arctic Cat communicated to dealers and customers, but we’re also committed to realistic timelines. We also announced that Wildcat XX will be available in spring 2018, which is later than was previously announced. We felt we needed more time to ensure that this machine will meet the fullest expectation of ourselves, our dealers and, most importantly, our customers. We want dealers and customers to know and trust in what we say about what to expect, the specifications, differentiation and the availability of our products.

AI: How will the purchase affect the business relationship with Yamaha on snowmobile engine sourcing and production?

Collins: There will be no change to our relationship with Yamaha. They are a key partner and source for engines for many of our snowmobiles, as well as an important customer of ours for the snowmobiles we produce for them. Both Kevin Holleran (President and CEO of Textron Specialized Vehicles) and I have met with Yamaha’s engine business leader, and all of us agree the relationship between Arctic Cat and Yamaha is good for both brands.

Collins: Absolutely! In fact, we’re investing in both facilities. You’re going to see important investment in fabrication and production capabilities, as well as in overall working environment. We see a great opportunity to build additional engine platforms in St. Cloud.

AI: That’s great news. What is the corporate culture of Textron, and how do you see that integrating with the culture of Arctic Cat?

Collins: Textron’s culture is a focus on best-in-class; developing talent the pursuit of excellence. What’s clear about Arctic Cat is that it’s fiercely independent. The company has long been smaller, scrappier, versatile and nimble. We admire that and feel like we can combine both cultures to elevate both brands.

Let me say it another way: Our expectation is to have best people who produce the best products.

AI: Tell me the key attributes of Arctic Cat that Textron saw, and that influenced the decision to purchase the company?

Collins: We saw a powerful, high-equity brand; we saw a portfolio of great products, many of which on the dirt side that we intended develop ourselves; we liked the roadmap that Arctic Cat has been pursuing in various aspects of its business; and we liked the geographic overlay of the Arctic Cat dealer channel. Each of these was a very powerful reason why we pursued and acquired Arctic Cat.

AI: What aspects of Arctic Cat’s business is Textron focus on first?

Collins: Our first priority is on products and the dealer channel. In the dirt and snowmobile businesses, the company that wins is the one with the best, newest and differentiated products. We’re committed to delivering the best portfolio of the best products. And we’re committed to a healthy, right-sized dealer channel to carry the full portfolio of products offered by Textron Off Road and E-Z-GO.

AI: From the customers’ perspective, what changes should they expect from Arctic Cat and how soon will they see them?

Collins: Our current and future customers should expect more and better products; as well as a stronger and healthier dealer network.

The No-Brainer sales event that’s currently taking place on non-current Arctic Cat dirt products is an example of how we’re helping the dealer network, by selling through on older product to make way for new and better machines. This is a huge win for customers who want the very best prices on great machines, and for dealers who want to clear out their inventory. With a clean pipeline, we can introduce more new products while dealers can have the confidence to order an inventory that will satisfy customers who want the newest features and technology.

AI: What’s the future of the new Arctic Cat headquarters in Minneapolis?

Collins: We’re committed to retaining the employees we need to operate the business. Cat has done a good job of hiring talent – the people who operate the business. There are many of those people who work at the Minneapolis facility. How much space these people need, and where exactly, are questions we don’t yet have answers for. Maybe it’s the same location; maybe it’s a different location. We don’t yet know.

AI: There was a restructuring of Arctic Cat and Textron Off-Road sales people last week, and some former Arctic Cat executives left the company not too long after the acquisition was final. Is the current workforce where you want and expect it to be?

Collins: The restructuring of Sales that you mentioned is now complete. Evaluations are still continuing on the rest of the business, but those words absolutely should not sound alarm bells in Thief River Falls, St. Cloud, Minneapolis or Augusta, Georgia. Frankly, with an acquisition this size, we need to take the right amount of time to fully understand all of the business units and personnel that will now comprise our combined company.

AI: Okay, I’d like to end this interview the same way I end all of my interviews here, by asking you to tell me a story about Roger Skime.

Collins: I’m glad you asked, because even though I don’t know Roger very well yet, I have a great story about him.

Immediately following when we announced our intention to acquire Arctic Cat, Kevin [Holleran], myself and a few other Textron employees went to Arctic Cat in Thief River Falls. We wanted to introduce ourselves, to start to get to know the people there as well as for them to get to know us. We’re careful, thoughtful people, and it was important for us to be seen for who we are, rather than as some all-conquering adversaries or heroes, or any other inaccurate perception that people sometimes have in these situations.

When we arrived, we went to a large conference room where all of Arctic Cat’s middle management people were gathered. We introduced ourselves and talked about Textron. We weren’t able to talk about any specific plans we had for the companies, because we had only announced our intention to acquire at that point, so we couldn’t legally talk about future plans. As much as anything, this was about getting to know each other as people.

After the introductions and explanation about Textron, we were given a tour of the facility by a handful of people, including Roger. The whole time during the tour, Roger held in his hand a printed picture of us with our names on it, which I thought was interesting. He was committing to memory names and faces.

When it was time for us to leave, we were all standing in the lobby thanking each other for the time spent together. Right then, Roger came up to us, looked us in the eyes as he shook our hands and said, “Working at Arctic Cat has never been a job for me; it’s been my life. I’m excited about our future with Textron. This is exactly what Arctic Cat needed.”

It was a powerful, emotional moment for him and for us. It was such an impactful statement and gesture. He didn’t have to do that.

But the fact that he did…we could not have gotten a better endorsement.

AI: That’s a great story, and I’m glad you shared it. Thanks, and thanks for the interview.

Collins: You’re welcome, and thanks for the opportunity. 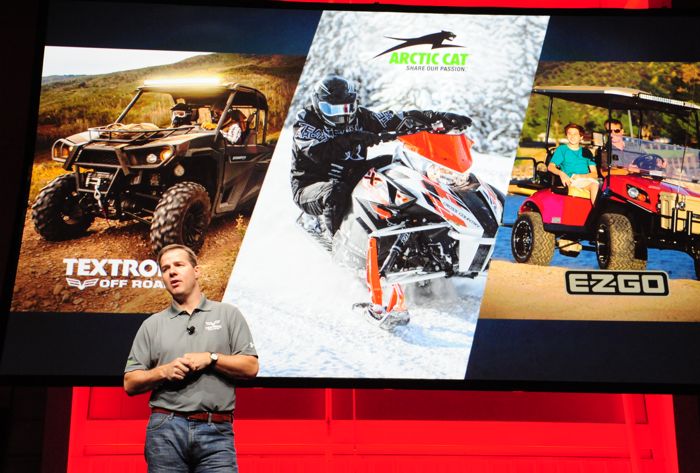