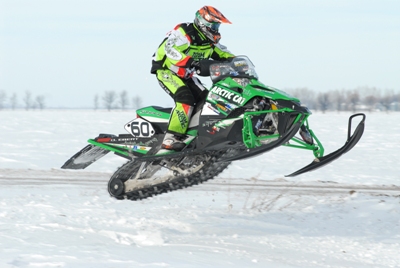 Team Arctic’s Dan Ebert had a stunning debut as a Pro racer last season, taking second in the stock class at the ISOC Series kickoff in Duluth. He followed that up with a third in Utah and a second in Shakopee before nailing his first “career cornerstone”: a win at the coveted USCC I-500 cross-country.

I talked with the 22-year old from Lake Shore, Minnesota, about his race season, his approach to the coming season and what it’s like to race both snocross and cross-country.

AI: Congratulations on a great season, winning the I-500 and scoring several podium finishes in ISOC snocross. From your perspective, what are the highlights from last season?

DE: Coming out of the box at Duluth and being on the podium was a great feeling and really jump started the season. With podiums at Canterbury and Utah I felt like a had a pretty good season going, The I-500 was also a huge highlight and prestige event that I had no idea was going to turn out like it did. What a blast! 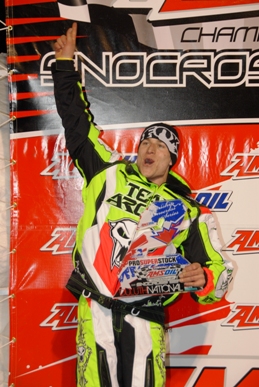 AI: How important was winning the I-500 to you personally?

DE: It’s an unbelievable feeling. People have raced there whole life and never won, or come close for that matter. We don’t usually do cross-country races on a regular basis so to just come in and race was really something, and says wonders about the Arctic Cat snowmobiles and how versatile they are.

AI: Can you quantify the difference between first and third place in snocross… what’s the difference in terms of speed, endurance, sled set-up and such?

DE: The speed can sometimes be less than a tenth of a second per lap; it all depends on the technicality of the track. Endurance is always going to be a huge factor with the length of the races we are running. A racer needs to be in utmost physical condition. The sled set-up is an always-moving target to be at the top. Just one or two of these terms alone will not win races. It takes the whole package to be successful. 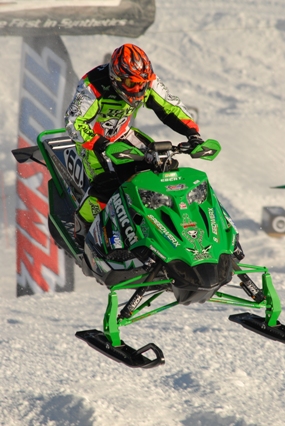 AI: Anything about last season that was disappointing?

DE:  The winter X Games were disappointing for me. I felt like we had much better equipment and speed than we were able to show. With a crash at the end of qualifying forced me to sit out the final with broken ribs. This was very disappointing to me.

AI: How did that injury affect the remainder of the season?

DE: It seemed like for first couple races after, that it hindered me. But a month after the injury, I was fine. My speed and results didn’t exactly show it, but I felt 100%.

AI: It seems to me you started your snocross season on-fire, leading several races including Duluth. What was your secret to that?

DE:  To be honest I’m not really sure, I think being the best prepared you possibly can before the season starts can really give you a jump start. Sled prep, practice, clutching, tuning, and a little bit of luck on your side all contribute to a fast start to the season.

AI: Describe the situation with your team, the number of racers and crew working out of the trailer and shop. Seems to me it’s slightly less glamorous than some people might expect, but that you guys are learning a lot.

DE:  Our team is very hands-on; all the racers do a lot of their own work on their sleds. It’s a pretty small team so the availability of extra hands can sometimes be slim. From unloading a dirty truck that’s full of dirty, wrecked sleds, to loading everything back up with sleds that are prepped to the best of our ability to win races that very next weekend, we all play a part.

AI: Are you working on every aspect of your sled, including at the races? Is this an advantage or not?

DE:  I’m a hands-on type of guy, always have been. When dad was racing with Tucker and I was “racing on my own,” it was my uncle Greg (who still pits with me today) and my mom that went racing. We would take my first 2002 Z 440 Sno Pro and go racing. We kind of needed to learn how to do it on our own from the start.

These days I still do a lot of the work on my sled at the races, like changing shock pressure or clickers, pulling out a skidframe and such. But the fine-tuning is done by guys like Steve Houle and my dad. I need to delegate of stuff, so that I can spend more time watching the track and seeing how the course develops.

I believe that knowing the ins-outs of a machine, how they work and what small changes can do, does give me an advantage. 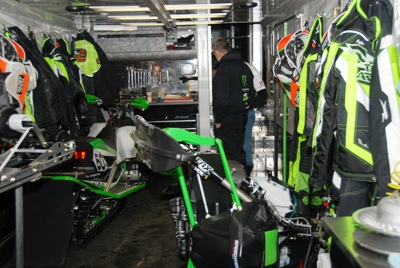 AI: You’ve been going to school for the past several years while also racing, correct?

DE: This will be first season where I won’t also be going to school. I’ll be a full-time racer. When I was a Semi Pro I also had a heavy course load in engineering, which hindered my race program. My first season as Pro I cut back to more general elective courses, so that managing my time was a little easier. I earned an AA degree this spring, and plan to go back to get my mechanical engineering degree someday. But for now, my job is to focus 100-percent on racing.

AI: Your dad is involved with the design of Arctic Cat race sleds. Are you also involved? How?

DE: He works 3 days in Thief River Falls at the plant in attempts to better our race sleds and continue to develop. He does a good job of keeping me in the loop on things he is working on and asked for my advice on things. When new sleds are being developed, I’m one of racers who tests and provides feedback. 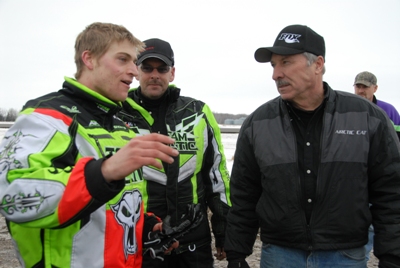 DE:  Absolutely, we are always testing and trying the next year technology or new ideas in our open sleds, it gives us the perfect place to test parts and ideas the place where it matters the most, the race track.

AI: What are your plans for the coming season? Defending your I-500 win?

DE:  We are planning on racing the ISOC national tour again and with any luck the 500 again. It is a grueling race, but a fun challenge.

AI: Do you know who will be racing out of your shop/trailer?

DE:  I believe the team will be similar to last season, Cody, Kyle, and myself, and all the mechanics are coming back.

AI: You race year-round… describe what you’ve been doing this summer and some of your successes.

DE:  I follow the Wissota dirt track series and race all over the upper Midwest with my Midwest modified race car. I have raced over 40 races thus far, with 13 wins, and am sitting 3rd in national points.

AI: How do snowmobiles and cars fit into your future career goals?

DE:  I’m not really sure how each fit, but I would like them to be in my future either way. I have a passion for both, and love racing each.

AI: Who are your snowmobile racing sponsors?

AI: Okay, a few short answers… what was your first sled?

DE:  Tucker’s 2000 custom mod. I was just a little kid in the shop making parts when we hand-built that sled. Talk about hours into a project. That sled had so much detail and nothing was overlooked in attempts to cut weight. Awesome project.

DE: Without a doubt wide open cross-country racing. Growing up racing snocross, I never rode at 100mph down ditch, so I’m not used to it. To hop on cross-country sleds the past few years and go that fast, it’s pretty crazy. I’m just not used to it. I’ve gotten better at it, but that speed still is amazing. I give the regular cross country guys credit for doing what they do. Great group of people. 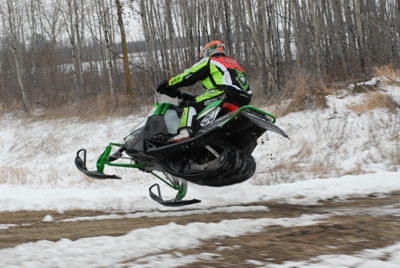 DE:  The 2010 I-500… I could not believe all the crazy things I saw in 500 miles. For instance, just the last day: I started fourth. Just before first fuel stop I was catching Ryan Huston. He hit an approach the same I would have if I’d been in front of him. He crashed right in front of me, which is unnerving, then gave me thumbs up.

Now I’m third. Going to the first gas stop, there’s Cory Davis on side of trail. Now I’m in second, and I keep thinking about what’s happening which is exciting and nerve-racking. Fifteen miles later there’s a sled on side of road…it’s Ekre. And I’m thinking, what heck is going on? Then my dad asked me if I noticed anything with my track, so I realized that something was going on with Davis and Ekre.

So now I know I’m leading, in my second-ever attempt at this famed race. And that’s quite different than racing behind other people, because I had to determine the right pace.

Should I back it down to leave some extra insurance, or go wide-open and maintain or increase my lead? Sometimes my mind wandered, and I ended up crashing after last fuel stop. Had to calm myself down and finish it.

That whole day it felt like chaos and anxiety and excitement all rolled into one ball of emotion. That’s what’s unique and special about cross-country, particularly the I-500.

Little did I know this was very common with Roger, something he considered “normal driving.” He has a passion for speed like I have never seen before.

He’s my hero, and I have learned so much from him. He is an icon in the sport of snowmobiling.

AI: Thanks Dan, good luck this summer with the cars.

DE: No problem, thank you, John. 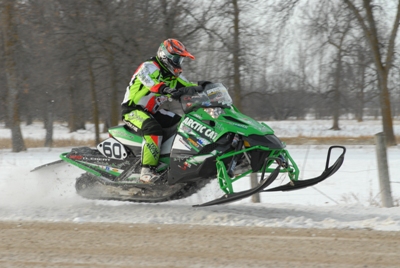