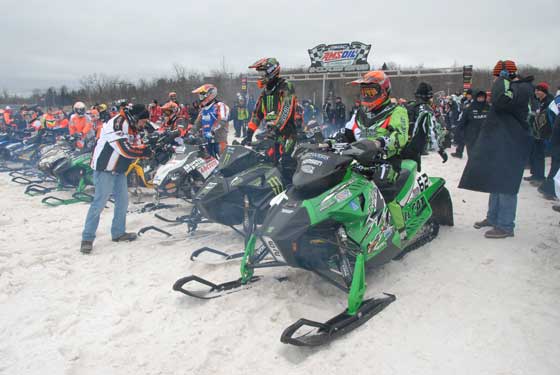 I’ve been thinking about Team Arctic’s tough showing at the Duluth snocross opener, and I wanted to follow up with a few pointed observations about the situation, and some historical context.

How Bad Was It?

In terms of Arctic Cat results, this Spirit National opener was the worst in memory. I’ve been to every Duluth race, and I can’t remember any one where Team Arctic racers didn’t win at least one class in Sport, Semi Pro or Pro.

Why It Was so Bad?

Several factors contributed to the tough showing for Team Arctic, some of which were mentioned by astute readers in the Comments Section of my Race Report.

Here’s my take on why:

One: An all-new Sno Pro race sled. Yep, having an all-new race sled that is at the very beginning of its development life was a factor in the team’s results.

I know there are some people who hoped/expected that Arctic Cat would come into the season with a full-developed, fully-understood and fully-calibrated Sno Pro. While indeed that would have been nice, it’s an unrealistic expectation.

Arctic Cat tested and calibrated the new Sno Pro during multiple engineering sessions last spring and summer. But for reasons of secrecy, none of these sessions took place in a real race environment, on a real race track.

There is a huge difference in track conditions and intensity between testing and real racing. The result is that stock calibration on the new front and rear suspensions is far from optimized for some conditions.

Compounding this situation at Duluth was the fact that none of the Mod sleds had been completed until just two days prior to the race, so there was little more than one day to ride/break-in the new sleds for any of the Team Arctic pro racers.

Twenty years ago you could show up at Duluth having just put together your sled (and only a few laps of testing) and win, but not anymore.

Two: Far Fewer Green Sleds. As has been the trend the past handful of years, there were far fewer Arctic Cat racers in the Sport and Semi Pro (now called Pro Lite) classes than there are Polaris and Ski-Doo racers.

This reality reflects the difference in budgets between the three OEMs. In simple terms, Team Arctic’s budget is smaller, and thus they aren’t able to give free sleds (or steeply-discounted pricing) to dozens of racers like the other two companies. The result is that fewer racers opt to race Cat because it’s more expensive to do so. Fewer racers means fewer chances for success.

The same situation has existed for the past handful of years, but was masked in the Semi Pro class in part by strong performances of Cody Thomsen, Kyle Pallin (both of whom were forced to turn Pro by ISOC this season), and Logan Christian (who jumped to Pro a year earlier), who were at the top of the class.

For better or worse, the days of racing for one brand your entire career is no longer a reality for many, many riders. So whichever company has the best deal is simply going to have more riders.

Think about this: Polaris has been running the same sled since 2005 and Ski-Doo since 2008. Their sleds are very, very evolved.

Furthermore, in the Pro class which uses Mod-only sleds this year, the top Polaris sleds are very exotic mods. The same high-zoot trickness is employed by the Amsoil Ski-Doo team.

Interestingly, all of these sleds are running 128-in. tracks/skidframes ala Arctic Cat. Heck, Polaris is even experimenting with wide-spaced A-arms/tall spindles.

Imitation is the sincerest form a flattery, but the real point here is that these competitors’ mod sleds are ultra-trick units, rather than slightly modified stock units like those campaigned by Team Arctic Pros.

If Arctic Cat chooses to play this same game, it will cost cubic dollars and take some time. 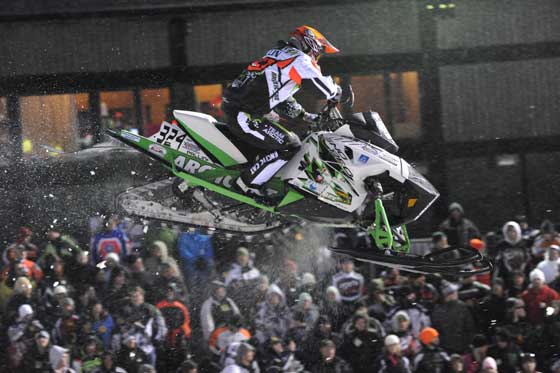 A lot, actually. For starters, their durability has so far proven to be excellent, which isn’t always the case with first-year race sleds.

Secondly, the new rear suspension has shown to be significantly more predictable in the bumps (especially high-speed bumps) compared to the previous skidframe.

The Speedwerx Mod Motor package is quite strong, while the stock engine is as good as competition.

Last weekend at the ISOC Regional race at Quadna, the Factory drivers (Dan Ebert, Thomsen and Pallin) got strong holeshots, the result of more test time and the inherent strengths of the new chassis/skidframe.

When you consider everything I’ve written above, the Cats actually did remarkably well at Duluth. And they’re only going to get better.

Will the Results Improve this Season?

Of course they will. It always works this way. With each race will come more a complete understanding of the sled, as well as feedback on what set-ups do (and don’t) work. The accumulation of this data is critical to the race program, the same as it has always been. 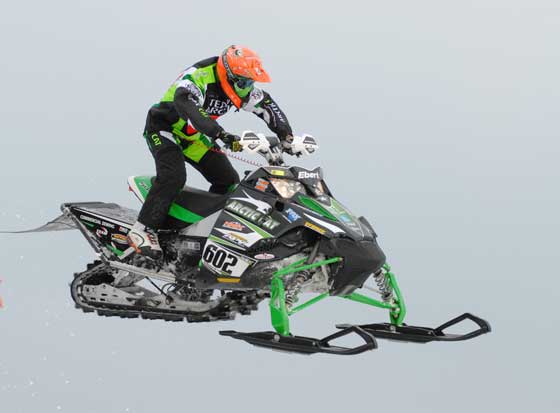 I remember the 2008 Sno Pro 600 (above, Dan Ebert, with the welded spindle clearly visible) and the learning curve required for drivers and crew to feel comfortable on it. It took much of the season (and there were some handling characteristics that were never truly resolved). And back in ’07-08 when the Sno Pro debuted, the competition wasn’t as good/developed as they are now.

Likewise, I remember the struggles with the 2002 Sno Pro/Firecat.

These kinds of struggles aren’t confined to Arctic Cat. It took Ski-Doo until last year to finally build a race XP that was truly competitive (and from what I saw at Duluth a couple weeks ago, their fastest racer – Tim Tremblay – is still struggling with durability issues on his machine). And I can remember piles of Polaris suspension components outside of their race trailer at Duluth about eight years ago.

More seat time will mean further development to the sled, and it will be equally beneficial to the racers to develop a feel for the new chassis. This might be just as important as the improvements in calibration.

Conversely, I don’t see the competition getting a whole lot better than they are now, whereas I see a lot of upside potential for Team Arctic.

What’s the Upside to This Year?

There’s lots of upside to a season on a new sled. For starters, for the first time in many years, what’s learned on the race track can directly influence and improve the sleds the rest of us ride. It was that trickle-down effect that defined the ZR era and that’s been largely missing ever since.

When I saw the new Sno Pro race sled unveiled at Haydays and talked with engineers about it, several components immediately stood out as possible improvements to future consumer sleds.

The ProCross chassis will be around for awhile, and I for one expect to see continual engineering improvement on it and its suspensions.

If there’s an upside to having only a handful of racers in the Sport and Pro Lite classes, perhaps it’s that a strong argument can be made (and heard) for increased racing budget next year. Sometimes it takes seeing a stark reality to open our eyes.

More will be learned this coming weekend in Ironwood. And I’m extremely curious how the first few cross-country races will unfold.

Interestingly, there are some racers who are absolutely ecstatic about the new Sno Pro in STOCK

Winning snowmobile races has always been a difficult task. But it’s that pursuit that has produced the best machines and most of the great developments throughout the history of the sport.

Arctic Cat is in hot pursuit of race wins. I see good things that will come from that. 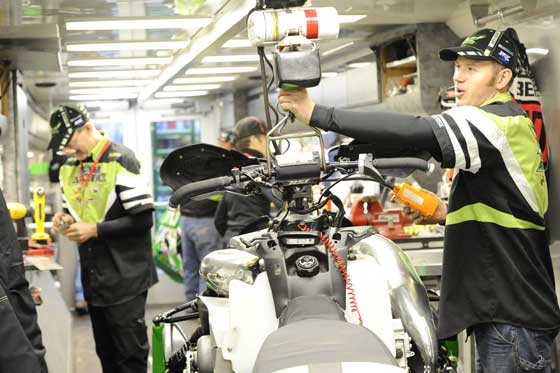 Inside the Factory Team Arctic race trailer at Duluth. 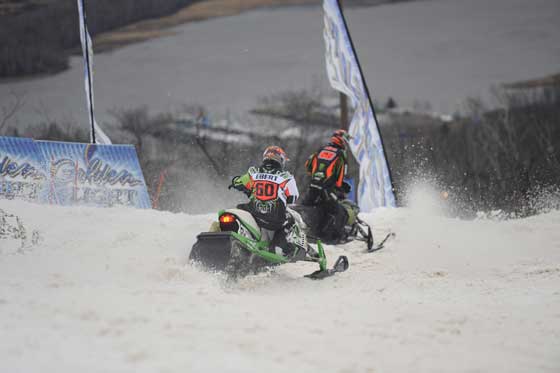 Two racers who understand how a sled works, Dan Ebert and Tucker Hibbert will be key to the further development of the new Arctic Cat Sno Pro. 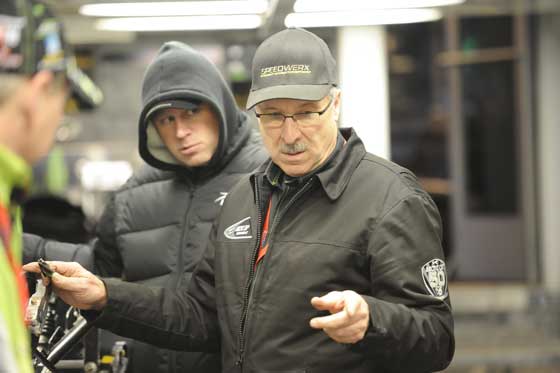 Russ Ebert (front) and Mike Kloety understand that development of the new race sled will be ongoing and fruitful, but will take some time. 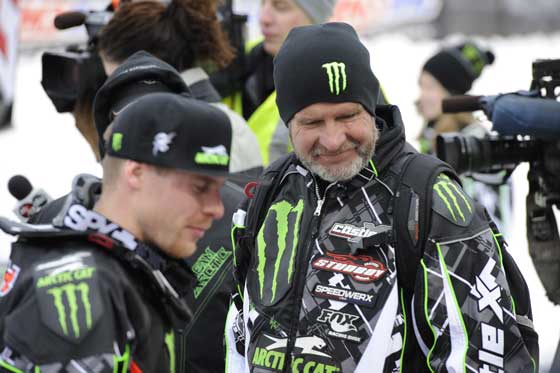 With the combined knowledge of the many racers, crew and Arctic Cat engineers, better days are ahead.