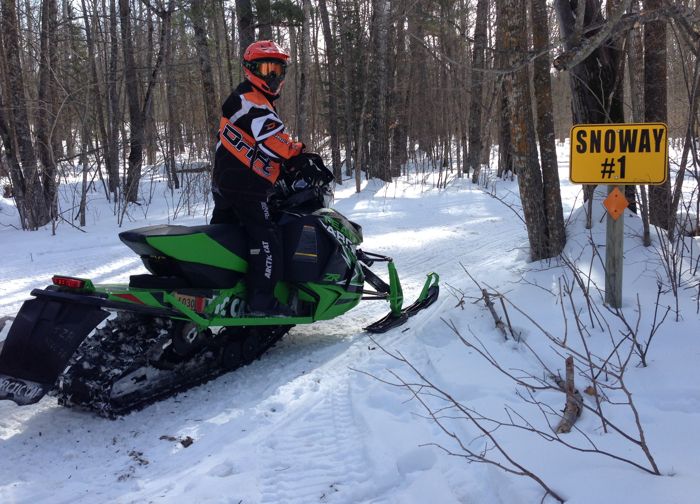 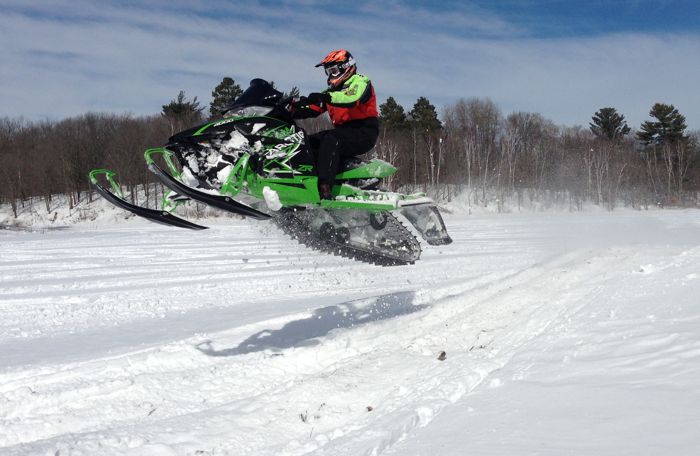 The first was on the Day 2 route of this year’s USXC I-500, which included river and ditch. The second occured this past Saturday, when I rode a lap of the severely whooped, 6-mile USXC racecourse in Walker, Minn., following the day’s racing events. The third experience was last Sunday, during a 75-mile trail ride in the Walker/Hackensack area (photo on the tight/twisty Snoway #1 trail above) with my son, Team Arctic Race Manager Mike Kloety and his son Derek.

Those are three very distinct conditions that reflect where most people will ride.

For those who want the nutshell review and don’t want to read the nuance, here’s the skinny: The 4000 RR is a laugh-riot to ride. It’s light, it goes through the bumps like a dream and it has a level of power that makes you feel like a hero in most conditions. For cross-country racers wondering how it compares to the venerable Sno Pro 500, the 4000 RR far more comfortable and plush; is more predictable in the bumps; but it gives up a little bit of precision while cornering under power.

Read on to get the more complete story. 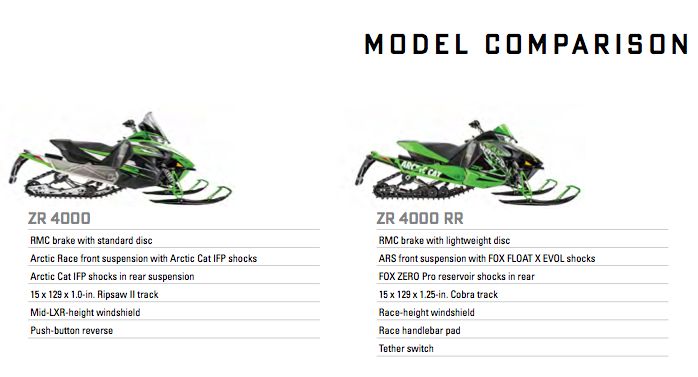 If you’re considering an RR instead of the LXR, you probably already know the differences. But if not, the above chart illustrates them.

If you’re not a rider who likes to blast the bumps and you have no intention of racing, the LXR is the better choice of the two. Softer suspension calibration, reverse gear, tall window and lower price make that choice pretty easy.

If you are a hardcore/aggressive rider, the 4000 RR is pretty dang sweet. First of all, it feels light. I haven’t seen an actual weight, so this is based on perception, but the front-end feels like it’s 15-20 lbs. lighter than my El Tigre ES.

Second, this is a chassis and suspension package that goes through the bumps very much in control and in comfort. I’m a huge fan of FLOAT ski shocks’ ability to soak the sharp and big hits. And with the FLOAT 3 EVOL versions on the RR, the bumps are absorbed, it offers excellent manners through the chop AND minimal compression roll while cornering.

Third, the 4000 Series engine makes me feel like a hero. Because it accelerates and runs fast enough to provide great thrills, but it doesn’t scare the crap out of you with dumb speed. In other words, I can truly ride this engine to its limits and still be in control.

The comments on the first ZR 4000 story I wrote make it clear that some people are not happy with 85-hp. I get it, and fortunately there’s a 125-hp version of this same sled, called the ZR 6000 RR.

Having owned a Sno Pro 500 since 2010 and having paid close attention to what others owners say about the sled, I’ve noticed that people who actually own or ride the 4000-Series engine are not the people complaining about it. On the contrary, they’re perfectly satisfied and know that a lightweight 85 hp engine is an advantage in many situations.

Speaking of the Sno Pro 500, that’s where I’d like to devote the next couple hundred words, because many of you are pondering if the ZR 4000 RR is a good replacement for your SP.

The answer is maybe.

If you’re a trail rider, no question in my mind, the RR is a better overall machine. It has a way more comfortable seat; a more plush and predictable rear suspension; better fit and finish (without the annoying shin protrusion on the cowling); is quieter; has a larger oil reservoir; doesn’t vibrate your feet; has far better headlights (and tail light); and comes with better shocks.

If you’re a cross-country racer, I also believe the RR will be a slightly better option, at least in the ditches. It tracks straight with no twitchy nervousness when going through the bumps. The seat is far better for me, as I sit as frequently as I stand when racing XC.

For sure I could have raced the Walker USXC course faster on the RR than I did on my Sno Pro (which also has EVOL ski shocks), because of the better handling in the bumps/holes. 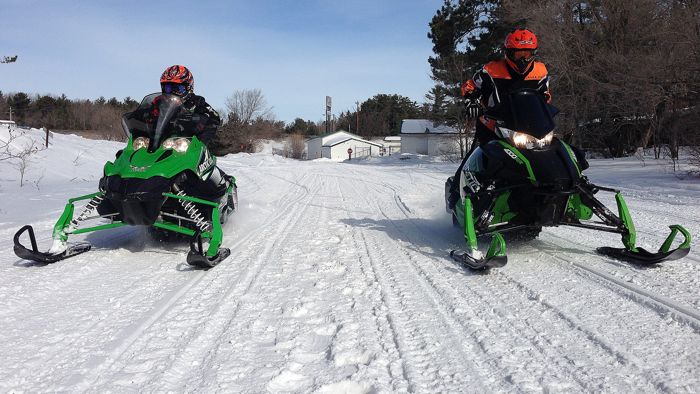 We raced the RR against my Sno Pro 500 a half dozen times on Sunday and they were straight up even every time. And as I noted in my first story, top speeds on snow will be in the 80-85 mph range depending on snow conditions.

I don’t yet know which sled is better for lake cross-country racing. If we look back at the lake races during the 2012 season, those first-year ProCross sleds were better than the handful of Sno Pro 600s that also competed. Perhaps that’s an indication of what to expect with the 4000?

Two areas that the Sno Pro 500 continues to excel are cornering and braking. It stays flatter while cornering under power, with less push than the RR. And I still prefer the braking performance of its jackshaft-mounted system.

My son will continue to race our 2010 Sno Pro 500 in the Jr. 10-13 class next season instead of getting a new 4000 RR, for financial reasons as well as the fact that the SP500 is still a great sled. He’s bummed out about that, having spent some time on the RR last weekend. He likes the RR better.

If you’re a snocrosser and wondering which sled is best, I can’t offer much insight. The Sno Pro chassis offers a bit more of an attack position, with the rider a little bit closer to the ski spindles as well as a better view of the skis. I know that difference was a challenge for some Team Arctic racers during the switch to ProCross in 2012. And certainly some people like the Sno Pro chassis position better while others prefer the ProCross.

[It should be noted that the 2015 ProCross RR chassis is slightly different than the 2013-newer race sled chassis, with the latter getting a tipped-down front bulkhead; longer front arm on the rear suspension; slightly different steering system; and slightly wider A-arms.]

The Sno Pro 500 has been a fantastic snowmobile during its five-year run. For me, it ranks as an all-time great Arctic Cat. It entered the arena to a chorus of grumbling for only having 85 hp and not being an 800, but it quickly won the hearts and minds of many, many owners. It transformed cross-country racing by offering bulletproof performance; that only needed studs to be race-ready; and that offered sane speeds for young and old riders alike. Plus, the fact that Arctic Cat made no significant changes during it’s five year run meant that you could race the same sled for several seasons.

The ZR 4000 RR isn’t the purebred racer that the Sno Pro 500 was. It bridges the gap somewhere between pure racer and high-perf consumer sled. I believe it will be every bit as successful.

Far more refined and comfortable than the Sno Pro 500 that it replaces, the 2015 Arctic Cat ZR 4000RR delivers a more predictable ride. 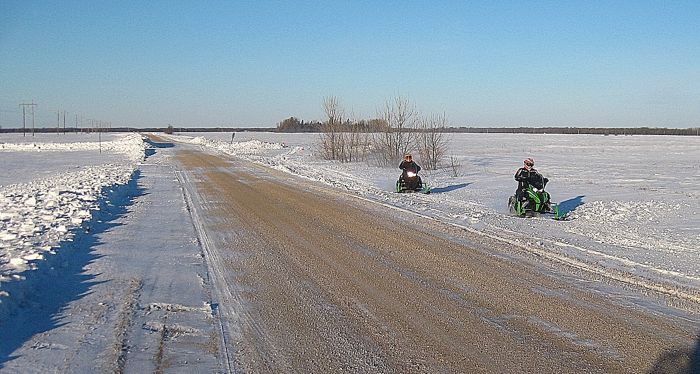 Running prototype ZR 4000 RRs along the race route on day two of the USXC I-500. Four of us rode that day, and each remarked that the 4000 is the perfect amount of speed and performance for ditch racing… and more fun than a 600 race sled. 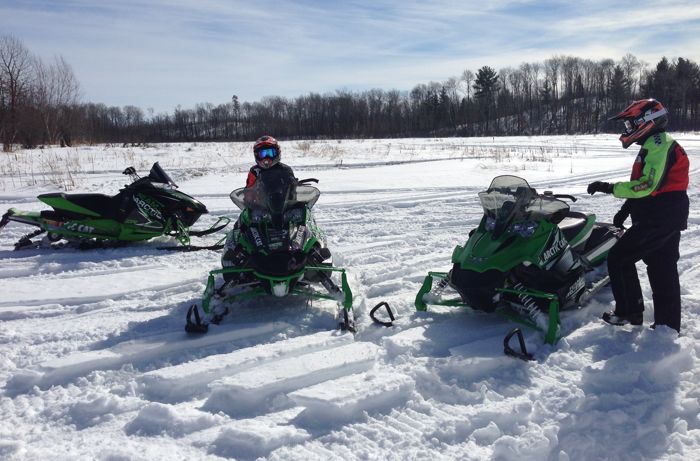 Swapping between a couple Sno Pro 500s and the new ZR 4000 RR during a day of trail (and some lake) riding near Walker, Minn.