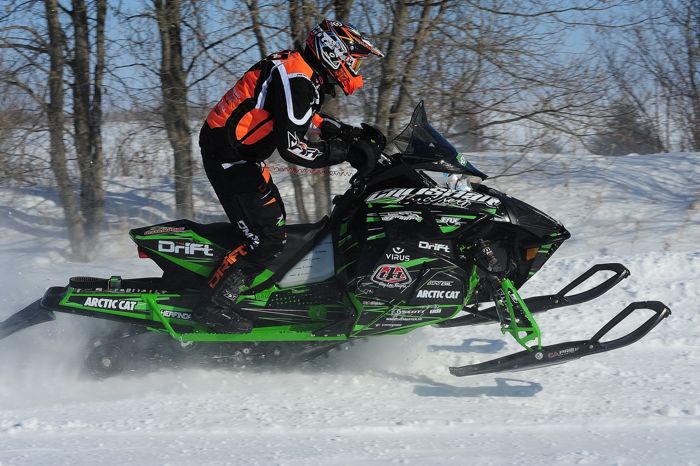 The 2014 snowmobile race season might be winding down, but Team Arctic racers stayed wound-up to score 20 combined wins in cross-country and Hillclimb competition during the first weekend in March.

The team continued its season-long stranglehold of cross-country dominance with another crushing performance at the USXC cross-country event in Warroad, Minn., where riders battled through record snow cover, deep holes and bitter cold to notch 11 wins and a podium sweep of six classes.

Christian Bros. Racing pro Zach Herfindahl delivered a powerful performance in the Pro 600 stock class, racing with a broken left thumb and a casted hand. It didn’t slow the 18-year-old down, as he captured his third win of the season and put a near-lock on the championship. Wes Selby put himself back onto the Pro podium with a strong third place finish.

“We continue to be impressed and proud of all our cross-country racers and crew,” said Mike Kloety, Team Arctic Race Manager. “Warroad was a tough weekend, with a rugged race course that claimed a lot of riders and sleds. To have 11 different winners on Arctic Cat snowmobiles proves the depth of our team and the strength of our ZR ProCross and Sno Pro 500 machines.”

An equally dedicated crew of hillclimb competitors topped the RMSHA Hillclimb in Afton, Wyo., scoring wins in eight classes and taking one King title. The wins came in Stock, Improved Stock and Mod classes aboard M Series Arctic Cat snowmobiles with the ProClimb chassis. Kyle Tapio proved on top of his game, winning 800 Improved and the Improved King title as well as taking second in 800 Stock. And David McClure piloted a M6000 to third in Stock and second in Improved Stock.

“Seven different Arctic Cat racers won classes at Afton,” said Al Shimpa, Team Arctic Hillclimb Coordinator. “We saw victory in the Men’s and Women’s categories, plus the New Members and Semi-Pro classes. That highlights the team’s depth as well as the adaptability of our ProClimb chassis for all kinds of riders.”