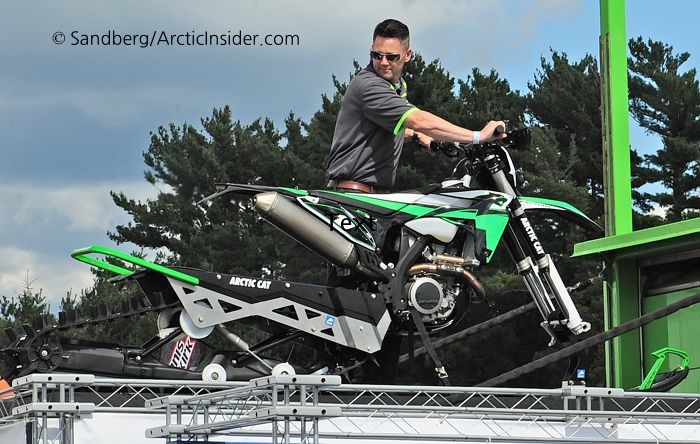 In what was probably the biggest surprise of the event (and truly a sneak peek), Arctic Cat briefly unveiled a single-ski type snow vehicle at Hay Days this weekend.

It was just a tease, with VERY limited information and a VERY short cameo. The single ski machine appeared for about 1 minute atop the tailgate of the Arctic Cat truck before disappearing and remaining under wraps.

“Arctic Cat has been very forward with our company vision to deliver ‘The Ultimate Off-Road Riding Experience’. Keeping true to our commitment, a new snow vehicle was unveiled at Hay Days, providing a glimpse into the future.

“Together with Camso, we have been working over the past three years on a suspension system.

“It’s Arctic Cat’s goal to provide a new riding experience to a category of snow lovers that want the lightest, most affordable vehicle for mountain riding.

“Announcing the Arctic Cat SVX 450! You can expect further details in the coming months.” 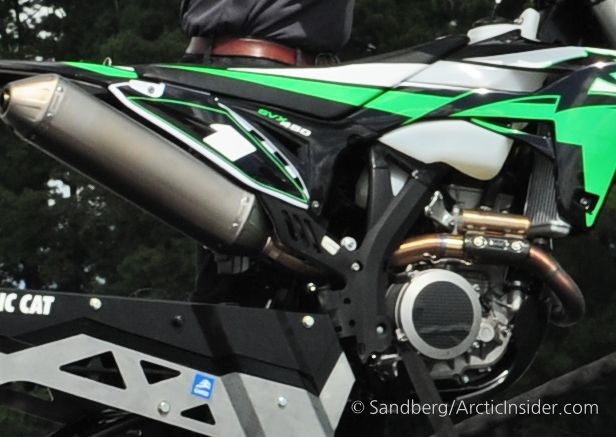 I asked people from Arctic Cat if the 450 4-stroke engine is made by Yamaha. Arctic Cat isn’t saying who is building the engine. We will have to wait and see.

Here’s what I can glean from the photos I shot:

-It’s a totally unique rear suspension, with what appears to be a single shock that’s mounted outside of the rail(s), rather than in the traditional location between the rails.

-There appears to be a cover over the rails, or perhaps just a single rail within the track.

-The machine has a single Arctic Cat ski.

The abundance of single-ski snowmobiles in various booths at Hay Days and the fact that Polaris purchased Timbersled this past spring suggests that this new market has the potential to rapidly expand.

As to when Arctic Cat will deliver more information about the new single-ski snowmobile, I can only guess. Let’s hope it’s soon, because this machine is dang exciting!