A gloominess hangs in our household whenever it’s wintertime without snow. You know what I’m talking about.

Whether it fits with the historical record or not, my expectation is that the cold and snow should be here in December.

No doubt the combination of last winter’s lameness and an unseasonably warm November was the source of an edginess that sliced into what should have been good days, sowing the seeds of doubt.

Will this winter be brown?

Will my children ever experience the kind of shut-down-the-region-snowstorm that seemed to define the winters of my youth?

Is global warming real and here to stay?

I wasn’t the only one at my house with a heavy heart. My kids had been surly for what seemed like weeks. And each day after school they slumped into the house with an almost monotonous snarl, with little interest in playing outside.

As a third-grade school teacher, my wife talks about the up-and-down movements of mood among their classes during the year, as if all the kids are on a similar wavelength that can range from high to low. For the past few weeks the overall mood was at the bottom of the spectrum.

So jaded we’ve felt at weather forecasts that missed their calls for snow that, last Tuesday while watching the evening news, we barely put stock in the computer models and talking heads that suggested the white stuff would come at week’s end.

“It will probably be rain,” was me default refrain.

On Wednesday the click of the bookmarked weather site on my computer brought with it a raised eyebrow and the flicker of raised hope: The chance of light snow increased to 40 percent for Friday, with the possibility of something bigger on the weekend. Another click later that day showed the percentage increasing.

Could it be true? Just in case, I threw a couple empty 5-gallon gas cans in the back of the pickup to fill when I went into town on Friday.

And when I tucked the kids into bed that night, both asked if the snow was coming.

“I hope so,” was all I allowed myself to believe.

Friday our family arose from slumber the same as we did the few days prior, although our dog Bella seemed to have an extra zip in her sprint for the breakfast bowl of Purina. I’m convinced animals (and some people) can sense swings in barometric pressure, which had surely occurred during the previous handful of hours.

Around Noon the grey skies began dropping light flakes… a promising development. An hour later, the small flakes had turned larger. Soon the shelter belt of trees across the street from my office window had blurred behind the wintry mix.

I wouldn’t know it until later that evening when we were sharing our revelations of the day, but at that moment inside my wife’s classroom, 26 kids had their faces pressed hard against the window while their legs, arms and voices signaled the arrival of nature’s greatest transformer of the human spirit. Little else academically was accomplished the rest of that day, to which the teachers could only smile knowingly.

The one inch of snow that fell on Friday was just a primer for the blizzard that blanketed us two days later. Likewise, the excitement that filled area classrooms on Friday were tame compared to the screams of joy that echoed through neighborhoods on Sunday as snowballs were thrown, snowmen conjured and snowmobiles rumbled to life.

The gloominess and doldrums that had defined the previous three weeks had been instantly covered by a blanket of joy. It was, in a word, transformational.

For children and snowmobilers alike, there is no weather event that so completely (and quickly) transforms us as snow. Snow brings instant, transformative joy and optimism.

I realize there are many of you reading this who have yet to experience this season’s snow storms, and it might be impossible for you to know the conviction in my heart.

But this I know: the snow is coming. And it will transform you.

On friday, the trees in the shelter belt across the street from my office were blurred from the first snow that fell during the weekend. Little did we know what this would look like 48 hours later. 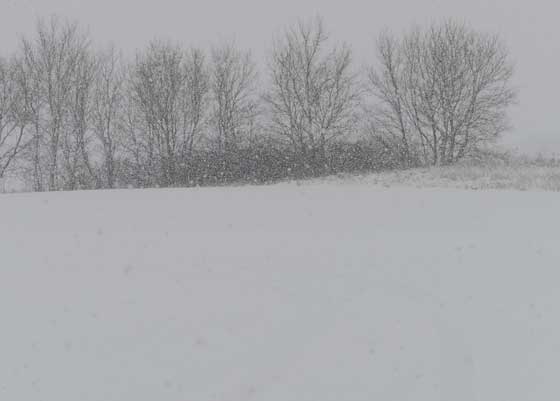 Same area on Sunday afternoon. And more was yet to come…

I realized something during this snowfall: That I like the grey, hazy view of snow falling even more than the bright blue skies that often occur a day after a big storm. There’s something more evocative and moody about the grayness. 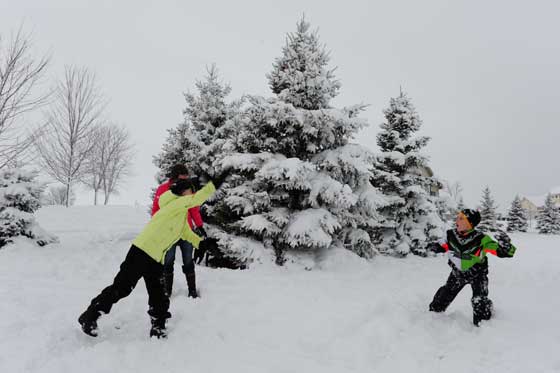 Our family played outside most of the day during Sunday’s snow storm, going inside only to eat and get dry gloves. We’re a family that plays together quite frequently, but there’s something extra joyful about playing in the snow. 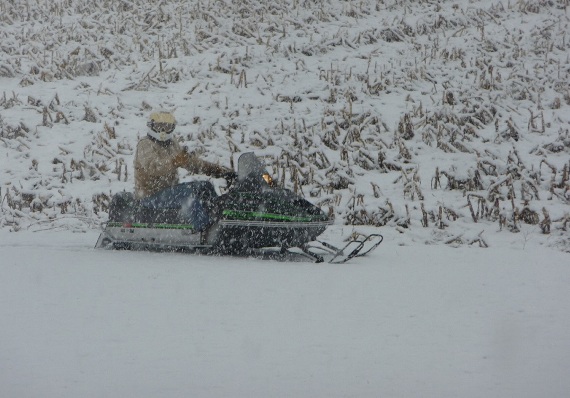 Arctic Cat fan David Hagemann sent this photo of himself that was taken last Sunday at his farm in Wisconsin. It’s funny…even though he’s wearing a full-face helmet, you can just see by his posture that he’s smiling. Seriously. 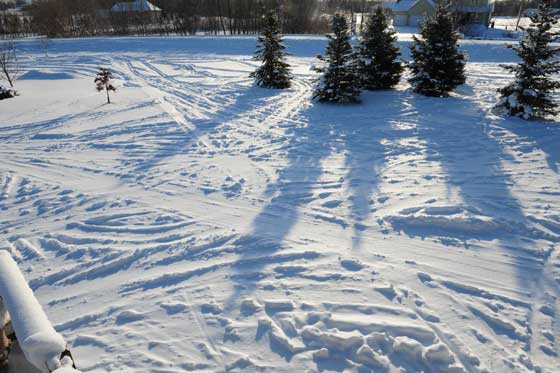 On Monday, the day after the blizzard, I snapped this shot of the backyard. Evidence of a transformational day. 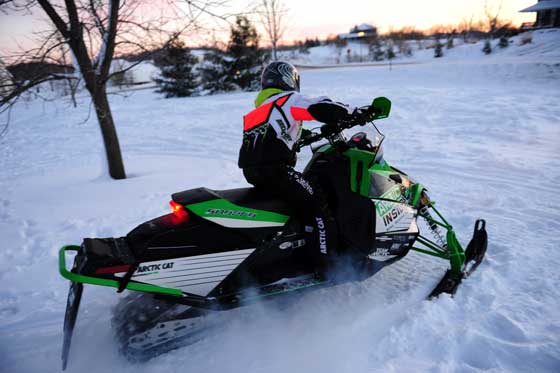 When my son Cal came home from school on Monday, the first words out of his mouth were, “Can I go snwomobiling?”

For sure, Cal. For sure! 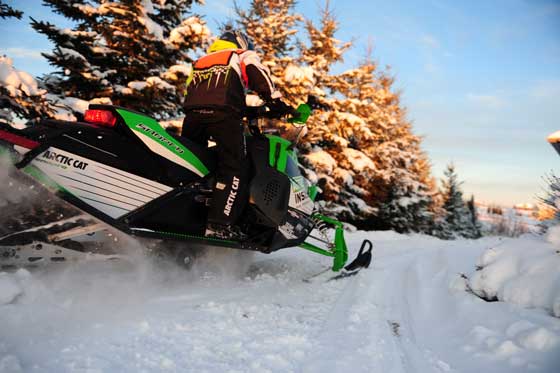 And so officially begins our winter.

It’s my sincerest hope that your first real snow was/will be as transformational as ours.