The Speedwerx/Tralo Motorsports/Arctic Cat short course team had another strong showing with two class wins and three podiums in Rounds 7 and 8 of the Championship Off-Road season at the world-famous Crandon International Off Road Raceway this past weekend. The team had five Wildcat XXs competing in the event: Jeremy Houle No. 54 and Rookie Pro Jack LeTourneau No. 97 in the Pro Stock class, and Sportsman class rookies Mike LeTourneau No. 99, Jake Jorgenson No. 11 and Jonny Hentges No. 15. 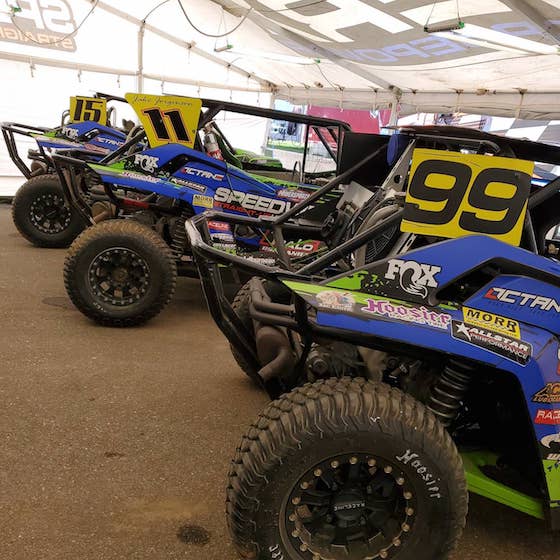 Friday’s events kicked off with the traditional race parade through downtown Crandon. Fans got an up-close look at all the vehicles and met the drivers before the race. The Sportsman class raced throughout the afternoon into the early evening with the 33-car, 10-lap Sportsman SXS race as one of the featured events. The land rush style standing start is another tradition at Crandon; and with the 12-car points invert in the Sportsman class, all three drivers would be on the front row with Mike LeTourneau and Hentges closest to the preferred inside line. LeTourneau got the holeshot, but a massive crash off the start forced a restart where he jumped out front early and lead flag-to-flag for his first win of the season. Hentges had another great podium run in third, while Jorgenson had mechanical issues after contact with other competitors and would not finish.

First up on Saturday was the 35-car, 10-lap Sportsman SXS World Championship event. All three drivers again were in the front row for the 12-wide land rush start. They all got through the start clean, and LeTourneau again powered to the lead early. There were numerous cautions after the first lap and officials shorten the race to five laps. LeTourneau withstood all challenges for another win, while Jorgenson made some great passes to grab another podium in second, and Hentges battled hard in the pack finishing 10th.

The Pro Stock SXS class had 31 cars line up for their 10-lap main event. Houle qualified P1 and Jack LeTourneau P8 so both were in the front row for the start. A good start saw Houle in third and LeTourneau in fifth early on, but misfortune struck early when Houle suffered severe damage to the left rear after contact with another competitor and could not finish the race. LeTourneau continued to charge hard in third and challenged for second. A small mistake trying to find a way around second shuffled him back to fourth where he would finish.

Sunday was all about the Pro classes with extra money on the line for the World Championship races. The Pro Stock SXS field was lined up by the Saturday’s finish, so LeTourneau started in fourth, with Houle in 28th, and Jorgenson also joined at the rear of the 35-car field. The race was only six laps long, but the guys made the best of it with LeTourneau getting another podium in third, Houle charging through the pack to finish fifth, and Jorgenson put in some good laps to finish 25th.

It was a good weekend overall with all five drivers challenging for positions inside the top 10 in season points going into the Champ Off Road inaugural season finale at Crandon on September 26-27. In Pro Stock SXS, Jack LeTourneau is currently fifth in points and Houle sits in ninth. In the Sportsman class, Mike LeTourneau has moved up to fourth place, with Hentges in seventh and Jorgenson right behind him in eighth.

Up next is the SXS Sports event September 18-19 at 141 Speedway. The dirt oval track near Maribel, Wisconsin will be transformed into something unique for racing under the lights. Check out sxssportsracing.com for more info on the series and their Facebook page for a livestream of the race.