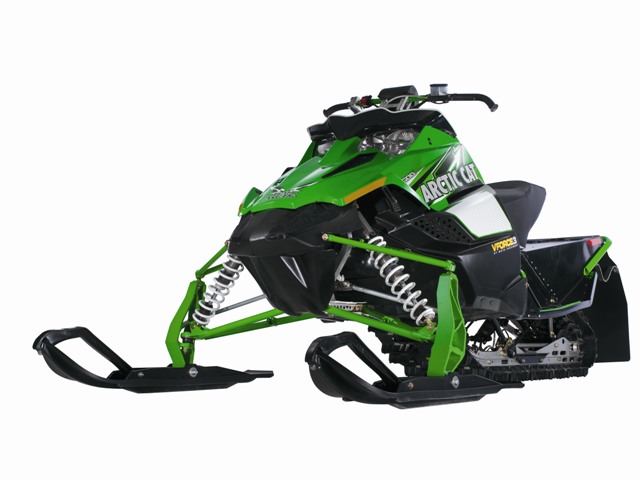 In Part I of this series we established that the 800 H.O. and 600 consumer twins don’t fit into the Sno Pro race chassis. The question I had is, “Why wasn’t the chassis designed to accept these consumer-friendly engines?”

To answer the question, we must go back to 2006, when Arctic Cat was on the eve of delivering the first production F Series sleds in the new Twin Spar chassis. The pace inside the engineering and production facility in Thief River Falls was fast, and it ratcheted up several more notches when ISR, the racing rules governing body, announced a change from 440cc to 600cc engine displacement for the 2008 race season.

The then-current race sled was based on the Firecat chassis and showing its age. Faced with the prospect of fitting a 600 engine into an already long-in-the-tooth race chassis, a handful of engineers agreed that a new race sled was needed. But what?

As the replacement to the wicked-fast-but-too-lively Firecat, the all-new Twin Spar was a pendulum swing in the other direction, offering amazing comfort, rider-forward ergo’s and a host of new engines that were far cleaner than the 700 rocket ship and 105-hp 500 twin.

But these new F sleds were also bigger, heavier and dressed in a lot of plastic. To many Arctic Cat faithful, including the engineers tasked to build the next race sled, the Twin Spar was a phenomenal trail sled, but not the right weapon for snocross and cross-country competition.

So, working on a fast-paced, highly-compressed time schedule, a small group of engineers conceived, developed, tested and built a new race sled for the 2008 season. 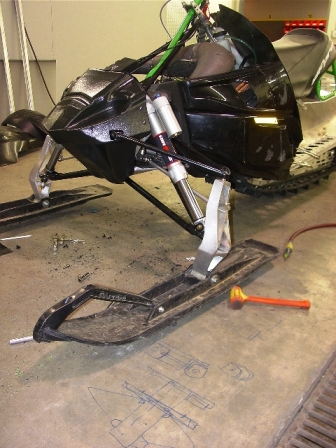 “We pushed it through quick,” says Troy Halvorson, Arctic Cat engineer and the guy responsible for managing the production. “We pooled ideas about what the Sno Pro should be from a lot of sources… including racers and our engineers. But because the company was knee-deep into bringing the Twin Spar to market, only a few engineers were able to focus entirely on the Sno Pro.” 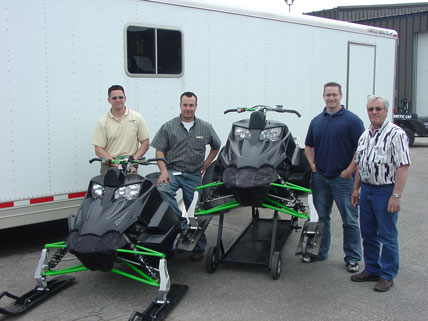 In simple terms, their goals for the Sno Pro race sled were to make it as small and light as possible while retaining the durability needed for competition.

They wanted a rider position (butt, hands and feet) and ease-of-steering that were similar to the Twin Spar. The nose area needed to be short and high, to prevent the “scooping” that occurred in deep holes with the previous race sled. It would be a race-sled only, but incorporating new ideas that would be tested for the next consumer sled.

And because they were working on such a compressed timeframe – for all practical purposes they had to achieve in 1.5 years what would normally take a minimum of three – decisions were made quickly, without the company-wide input that would normally guide the development of a new snowmobile.

One casualty of this situation was the decision that the bulkhead wrap tightly around the 600 race engine.

“We wanted the front end as compact as possible,” says Halvorson. “Dimensionally, it’s only large enough for the 600 race engine. Nothing larger.”

When talking to Halvorson about the decision, I detect conflict and regret.

On the one hand, the Sno Pro 600 race sled has proven wildly successful on the race track. In racing, where the margin for success is razor-thin and always diminishing, small compromises can translate into mediocrity. 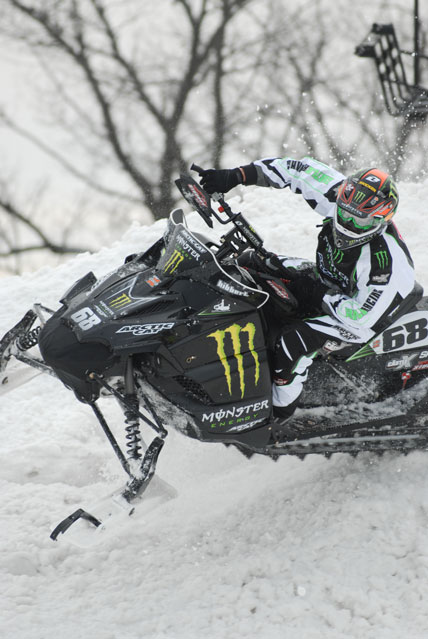 At it’s first showing in the Pro Open final at the Duluth National during Thanksgiving weekend 2007, the then-new Sno Pro 600 and Tucker Hibbert proved unbeatable. Racing against proven designs from the other brands, the new Sno Pro 600 was clearly as-good and soon-to-be-better. 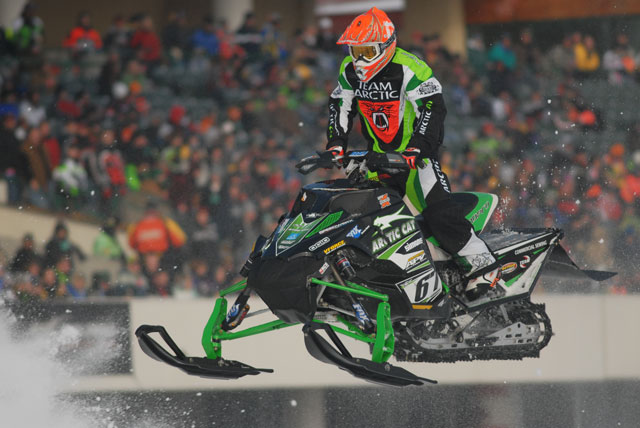 In the hands of Team Arctic pilots like Ryan Simons, the then-new 2008 Sno Pro 600 delivered a new level of predictable handling, easy (and sharp) steering and aggressive ergo’s. 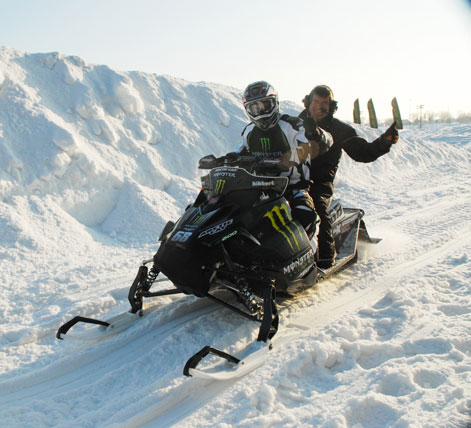 By the second National race at Canterbury Park in Shakopee, Minn., Tucker and his dad, Kirk Hibbert, gave the Sno Pro two thumbs up en route to dominating the race action.

On the other hand, there are many people (including Halvorson) who want to see a consumer-available Sno Pro 800. As we detailed previously, it isn’t going to happen.

“Could we re-engineer the Sno Pro’s bulkhead and plastic to accommodate the 800 engine,” Halvorson asks rhetorically? “Yes. But doing that would delay the other future projects.”

It would also translate into a wildly-expensive snowmobile.

Because the Sno Pro 600 was designed as a purpose-built race sled that would never see large production numbers, Arctic Cat didn’t incorporate any high-dollar, long-lead-time injection-molded plastic or hard-tooled parts. This kept the tooling costs very low, but it translated into labor-intensive and expensive per-unit costs to build.

What is manageable, however, was a small production run of Sno Pro 500s, an idea borne of the company’s effort to grow racing and to expose the media to cross-country racing.

“After we put the snowmobile magazines and ourselves on 85-hp F5s in the 2008 I-500, a light bulb went on,” says Arctic Cat product manager Joel Hallstrom. “Seventy-five mph down a whooped-out ditch is plenty fast and thrilling and, in the opinion of many, a lot more enjoyable than the 90-plus mph that we see from 130-hp 600s.

“It occurred to us: if longtime racers like myself and hardcore snowmobile journalists had a blast on F5s, so would people who wanted to try racing for the first time. And if we put the 500 in the Sno Pro chassis, we’d have the perfect set-up.”

Not long after the I-500, at the urging of people like Kale Wainer, Hallstrom and Mike Kloety, Al Shimpa from the Race Shop fabricated a proof-of-concept 500 Sno Pro that the engineers tested at high elevation in Cooke City, Mont., in late-spring. It proved an instant hit, even better than hoped.

While placing the 500 in the Sno Pro chassis presented its own challenges according to Halvorson, it didn’t require a wholesale retooling. Even still, I suspect that the company is forgoing its usual profit margin by offering the Sno Pro 500 at $8,300 U.S. MSRP.

In building the Sno Pro 500, Arctic Cat is intent on two goals: provide a springboard for racers to try cross-country and snocross without the expense and uber-performance of the 600 race sleds; and offer to trail riders their highest performance chassis matched by an oil-injected, EFI-equipped engine that burns pump gas.

No, the engine does not pump out the 120-160 hp that constitutes the bulk of the high-performance market.

Were I to speculate, I’d say that if they could go back to 2006 at the moment of decision on the engine packaging, they would probably make it large enough to accept larger motors. But that’s water under the bridge.

It’s abundantly clear that in this age of historically-low production numbers and the rising costs associated with meeting ever-more-stringent emissions, that future chassis platforms will be used by most or all model lines, from trail to touring to mountain and even racing.

And as long as I’m speculating, I don’t expect the Sno Pro 500 to be a one-year wonder, replaced in 2011 by the next chassis platform. I predict at least two model years before the next chassis replaces the Sno Pro, Twin Spar and Crossfire/CFR platforms.

And based on the success of the Sno Pro (both 600 and 500) as well as the concept drawings shown at Haydays, the next-generation chassis will bear a certain resemblance to the Sno Pro.