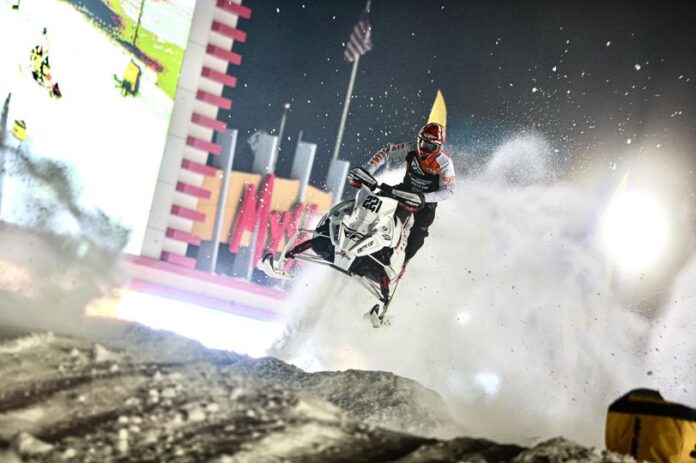 Another weekend and another stop on the National Snocross Tour brought us to the iconic Canterbury Park in Shakopee Minnesota. As we came out of a long weekend in Fargo for Round 1 the team had their eyes set on the podium, and that’s exactly what they did.

Friday Night: As we approached the night show, we knew it was going to be a hard battle to get to the front. With a smaller track than usual,tighter lines, and a tight run into the first corner we knew it was going to be a challenging one. In the first round Dan would push his way up in a stacked field and come out 3rd Place. The second round dan would have a hard charge off the start, but in the end would suffer a sled malfunction causing him a 7th Place Finish. After a sled malfunction and not getting the best spot on the start Dan had some work to do. Dan pulled the wholeshot and ran off with the pack, pass after pass Dan pushed himself all the way up to 4th and that is where he would finish Friday nights pro final.

Saturday Night: Coming out of Friday night with a top 5 finish in Pro we knew we were where we needed to be. Round one did not give us the best start and Dan would have to work his way up the field resulting in a 7th Place Finish in Round one. Round two gave us a better pick on the line and getting the holeshot would push Dan up to the front of the pack. A fully stacked heat with all top 5 point Contenders it was a battle. Dan would end Round 2 with a 3rd Place finish. After a fantastic run in round two it was now time for Saturday nights Pro Final. Dan would line up in the middle of the pack on the start line for the final, and as quick as the race started it would end for Dan. Unfortunately Dan got pinched right off the start causing him to wreck and unable to race the full duration of the pro final. His night would end with a 13th place finish. Dan currently is sitting in 8th Place for National Points

Friday Night: A stacked field of 24 pro lites would enter the night in the chase for a podium. Round 1 of the night for Anson gave him a fully stacked heat of 8 riders. Anson would push his way mid pack of the start and work himself up to a 4th Place finish in Round 1 of Pro Lite. Round 2 would give him almost the same line up of riders, he would grab the the holeshot and start to run away with it battling for the lead, but would come short resulting in a 2nd Place finish in Round 2 pushing him to the front row of the final. 15 riders would line up for the Pro Lite Final, Anson had a good start but would get pinched off coming into the first corner causing him to be thrown from his sled. Despite this happening, anson would jump back on and push all the way through the pack and complete the Pro Lite in 7th Place.

Saturday Night: After a wreck and finishing Friday nights Pro Lite Final in 7th Place it was going to be a push to get to the top, and he did just that! In Round 1 Anson would line up next to some of the top points contenders, he would go on to get into the first corner right next to them, and push himself all the way up to a 3rd Place Finish in Round 1. Round 2 was a similar line up and off they went. Gaining positions lap after lap Anson would push himself all the way up to a 2nd Place finish for Round 2. Both round finishes gave Anson a great gate pick for the final. 15 Pro Lite riders would line up for the final, and we knew it was goign to be an action packed final. The light would turn green, and they were off. Anson had a wholeshot like no other into the first corner along side two riders, and would find himself making a pass that sat him into a comfortable 2nd place spot. Lap traffic was no issue for him, the checkers would wave and Anson would grab a 2nd Place finish in the Pro Lite Final! Anson currently is sitting in 6th Place for National Points

Saturday: With Friday Night’s Sport final not being the most ideal, both Hegman and Johnson knew what they needed to do to get up on the box.Round 1 was underway, both Hegman and Johnson would find themselves lined up next to eachother. A stacked round with tight racing would result in a 5th Place finish for Hegman, and a 1st place finish for Johnson. Round 2, both boys had found their groove and would run away with the round in 1st and 2nd place the whole time. Hegman crossed the line with a 1st place finish, and Johnson was right there with a 2nd place finish in round 2. The field was set for the Sport Final, 15 of the best riders chasing a top 3 spot. Hegman would find himself out front with the leader right off the line, and Johnson would follow right behind. As the race progressed passed were made, lap traffic was avoided, and as the checkers flew Hegman would find himself with a 2nd Place Finish, and Johnson would finish in 11th place after a mid race collision.

This weekend was filled with lots of up and downs for the team, but in the end we came out on top! Next up we head to the legendary Deadwood, South Dakota for Round 5 & 6 in two weeks.