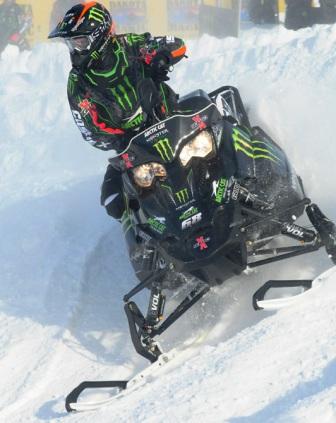 Team Arctic rolled into Fargo, ND, for the Dakota Magic Casino Snocross, hit the jackpot and rolled away with the lion’s share of hardware on the second stop of the ISOC National Tour. After taking eight of 12 class wins, including every Pro and Semi Pro final, Team Arctic racers and crew proved the only magic in Fargo was the classic Arctic Cat Black Magic.

Tucker Hibbert continued his one man wrecking-ball approach to the Pro Class, with similar come-from-behind dramatics that brought Arctic Cat fans to their feet. Racing his Arctic Cat/Monster Energy Sno Pro 600s, Hibbert led a cache of Team Arctic Pros that accounted for nine-of-15 finalists in Pro Stock, and seven-of-15 in Open. He’s now four-for-four on the season.

Factory Team Arctic teammates Cody Thomsen and Kyle Pallin put on a clinic in the Semi Pro Stock classes at Fargo. In the first race, Thomsen started in the back row, chased down a fast-starting Pallin, got around him and took the highly-dramatic win. But Pallin would not be denied, and in the second Semi Pro final he again nailed the holeshot and simply checked-out, taking his first win of the season and Arctic’s third (of four) in this highly-competitive class.

Carly Davis returned to the top-step of the podium in the Pro Am Women’s class, putting her Christian Bros. Racing Arctic Cat at the sharp end of the field for the first time this season. Proving the depth of the Team Arctic race program, Jesse Hendrickson won the Sport Stock final, while Travis Kern won the Junior 14-15 class.

“Our riders had one of those amazing weekends, where we either won or finished on the podium in nearly every class,” said Mike Kloety, Team Arctic Race Manager. “Sure we love to see wins from top-class racers like Hibbert, Thomsen, Pallin and Davis, but it’s extra-satisfying when our Sport and Junior racers get some of the glory. Taking eight of 12 finals illustrates the strength of our Sno Pro 600, the talent of our racers and the dedication of their crews.

“At the first National in Duluth, we noticed our sleds needed help with the 50-percent-throttle rule for the Junior classes. Steve Houle from Speedwerx jumped in and, with the help of Russ Ebert and the great folks up at ERX Motor Park, made significant improvements. We saw the result of that effort at Fargo, and with more testing I suspect this package will only get better.”

The next race in the ISOC National Tour is at Rio Tinto Stadium in Sandy, Utah, on Jan. 8. Go to www.isocracing for more information.