The Chase: A Day in the Life of an Arctic Cat Collector Tom Ische

You’re looking at one of THE most extensive collections of historically significant Arctic Cat performance snowmobiles in the world. It’s the work of Tom and Nancy Ische, and their daughter Brianna, of Glencoe, Minn.

The Ische’s are well known in the world of snowmobile collecting, having displayed at most of the big shows throughout the Midwest, as well as winning top honors at many of them. They and their sleds featured prominently in the 50 Years of Arctic Cat book, as well as the actual Arctic Cat 50th Anniversary celebration in Thief River Falls.

Like any collector, the Tom and his family have stumbled into a few sleds, but mostly they’ve worked long and hard to procure the machines (and the parts), and then spent untold hours painstakingly restoring them. This is what’s refered to as “the chase.” For some, the reward of collecting is to display their machines. For others it’s the time spent refurbishing and building the sleds. Tom enjoys these rewards, but he likely prefers the chase above all else.

It takes a special kind of dedication to amass a collection like theirs, a special love of the chase.

To gain a more complete picture of what it takes to put together a collection like this, I joined Tom on a trip to Thief River Falls last Friday. In a 17-hour whirlwind of driving and stopping at various places, Ische offered a glimpse into the effort required to source, find and procure the very pieces that comprise the kinds of remarkable Arctic Cats in his collection.

It was a day spent chasing.

At 9:30 am we rolled into the parking lot of Northern Crankshaft, just south of Thief River Falls. 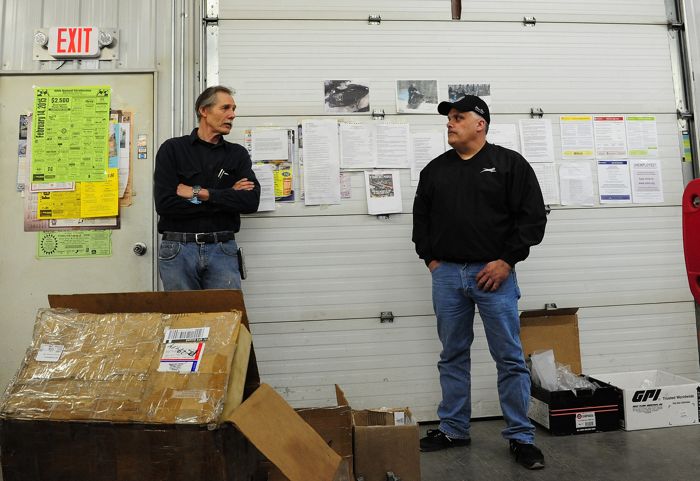 Inside, owner John Rouland (left) paused from his job of rebuilding engines to chat with Tom.

I say rebuilding engines and crankshafts is John’s job, but really it’s more of his art. Northern Crankshaft is probably the most utilized crankshaft/bottom-end repair business in the snowmobile industry, at least for vintage engines and probably for modern engines as well.

Look at any restored engine in a rare vintage sled (show or race) and there’s a very high likelihood that Northern did the work.

The dial indicators set up to measure a four-cylinder shaft. Hmm…

This was one of three 796cc Kawasaki four-bangers inside Northern on this day. The engine is famous for powering the big 1971 Arctic Cat King Kat 800, of which only 124 were produced.

When King Kat owners like Ische (he has the whole set of three) need the bottom end of their 800 engine made perfect, Northern is the place they go.

Parked inside the Northern shop, the 2015 Soo I-500 sled raced by John’s son Eric, still wearing the patina of snirt splattered across the front. This is a VERY cool snowmobile. It wouldn’t be the only Soo sled we’d see this day.

The reason for Tom’s visit to Northern was to pick up a bottom end of a 1977 Arctic Cat Z 340 that John had rebuilt.

John did a few final touches on the case, there was some discussion about a future project and we were on our way to the next destination: the Team Arctic race shop.

Really, the Race Shop was more of a detour. Tom hadn’t seen it before and this was a good day to visit.

Inside, we chatted with the crew and then checked out some of the sleds, including the 2015 Soo I-500 winning sled of Brian Dick and Wes Selby (#15), parked next to the identical eighth-place sled raced by Zach Herfindahl and Ryan Simons. These are some really, really cool machines that I hope to do a story on later this summer.

After chatting about the state of snowmobile racing with the crew, we were on our way to the next stop of the trip: another Arctic Cat collector by the name of Ray Nelson.

Ray lives a stone’s throw from the Race Shop. He’s been repairing, refurbishing and restoring Arctic Cats since the late 1960s. He has an area on his property called the “bone yard” that’s loaded with dozens of picked-over Arctic Cat’s.

Ray sells parts from the bone yard as well as uses them to repair/refurbish various project sleds he works on.

He’s one of the people who Tom occasionally buys parts from, part of his network you might say, and the two have become friends over the years.

From previous conversations with Ray, Tom knew that he was interested in the possible purchase of a couple skidframes.

While these two worked out the deal, I wandered around the bone yard and captured some shots.

After walking through the bone yard, Ray brought us to his shop and storage shed, where he has a few beautifully restored Cats.

Some of these machines are for sale, others are not.

I’m not sure if this perfectly restored 1973 Alley Cat is for sale, but I do know that you could eat off of it.

Essentially a parts-bin machine made from excess inventory, the Alley Cat is an interesting machine. It had an EXT seat, cadmium-plated skis, the short Puma chassis and a 305cc Kohler 4-cycle engine. It was available only to employees, and it’s believed that only 60 were produced.

This almost perfect 1970 Arctic Cat SSSCat has been in the Nelson family since it was new. It was ridden by his two daughters and now sits in beautiful unrestored condition.

There were some real gems, including this nearly perfect original leopard print seat.

Tom also found a seat from a 1972 EXT, a rarity that caught his attention and added to his haul home.

After a couple hours spent with Ray, it was time to say goodbye and head for the next stop: Kenny Halvorson, master of fiberglass.

Kenny Halvorson truly is a master of fiberglass, in the same way that John Rouland is a master of crankshafts. For some background on Kenny, read THIS STORY on Kenny from last year.

We stopped at Kenny’s because Tom needed to pick up reproduction hoods for a 1980 Arctic Cat Sno Pro and 1977 Z 340 (the same one he got the engine bottom end from Northern) he’s restoring. And he also picked up this 1974 Sno Pro hood for a friend.

While we were there, Kenny grabbed his 50 Years of Arctic Cat book to show me a photo of another version of a prototype Panther/Pantera that also appeared in the book.

Kenny also had a sweet gift for me: a piece of the decorative stonework used around the fireplace of Arctic Cat’s long-gone display building. The building burned down in 1973, and Kenny bought the remnants of stonework sometime after the fact.

It’s a pretty cool piece of history. Thanks again, Kenny!

After exchanging a few stories with Kenny, it was time to make our final stop of the trip: the old TRF city dump.

Yep, we met Tom’s friend Greg Hestekind and went to the old dump.

Why visit some old dump? Well, this isn’t any old dump.

In the 1970s and until the company went fishing, Arctic Cat dumped its trash at the TRF landfill. No big deal, all companies dump their trash somewhere, right?

But it’s what was in some of those loads that makes hearts race in collectors like Tom Ische.

The Arctic Cat display building fire that I mentioned earlier in this story? It burned the original Boss Cat I speed sled, the charred remains of which were hauled to the dump.

The factory Sno Pro sleds raced by Charlie Lofton, Dave Thompson and Larry Coltom? Supposedly, at the end of each race season, they too went to the landfill.

Stories are told today of semi-truck loads of brand-new Montana pipes and EXT cylinders going to the dump.

Today, these machines and parts are some of the most desirable and collectible of all Arctic Cat machines. And the most valuable.

Unfortunately, the city decommissioned the landfill sometime in the early 1980s. The dozers came and pushed a layer of dirt over the whole works, burying its treasure and leaving them gone (but not forgotten).

So there you have it: underneath the stratum of soil are all those rare, wonderful Arctic Cat snowmobiles and parts. Well, not ALL of those old sleds. Some made their way out before dozers came.

As the story goes, there were occasions back in the day when, after a load of Arctic Cat “trash” had been dropped at the landfill, one or more items might have been set aside. Then, after the sun had set, these items would find their way into the bed of a pickup truck and taken to a barn or a garage, or even a basement or attic. You might say they were rescued from the grave.

Not a lot of machines, but a few…

… such as this 1976 Sno Pro 340 that was raced in Super Mod II by none other than Larry Coltom at that year’s Eagle River World Championship.

We know this because Tom Ische purchased the sled many years ago and then paid for archival research at the Derby track using the serial number that’s still visible on the tunnel.

The above screen-grab from Ische’s Facebook page tells the story.

The chassis and hood of this 1977.5 Sno Pro was also rescued from the landfill before the dozers came. It too is now owned by Ische who, after purchasing it, partially restored it with an engine, skis, track, rear suspension, seat and a few other components.

So last week we paid a visit to this repository of rare, wonderful old Arctic Cat stuff.

Standing there, imagining that we were atop a semi trailer load of original cylinders, or perhaps Dave Thompson’s 1974 Sno Pro, infused me with intrigue, awe and even a bit of sadness.

We walked, not expecting to find anything, but just soaking in the historic significance of it all. Everything of value here was buried more than 30 years ago, so it’s not like we expected to see race sleds sitting around.

We did see this piece of rusted metal poking out of the ground. Not sure what it was, but we were certain it wasn’t an old Arctic Cat.

We spent a good half hour walking, talking and wondering. It’s circumstances like these that fuel the fire of collectors like Ische, as well as fans of snowmobiles like you and me.

The snowmobile-collecting hobby is full of stories involving appearances of long-lost historic sleds, of barn finds and other discoveries. Many great machines of yesteryear are accounted for in peoples’ collections, but many are still missing.

Some are being restored this very moment. Some are still sitting under a cover in an old barn or shop. And some are buried underground. It’s all part of the allure and culture of collecting.

Spending the day with Tom offered a glimpse at what it’s like for a collector to chase parts. Later this summer he’s going to let me into his shop to do a story on some of his great restorations.

So stay tuned for more.