The Dimmerman Files: Stories about the Phantom Sno Pro 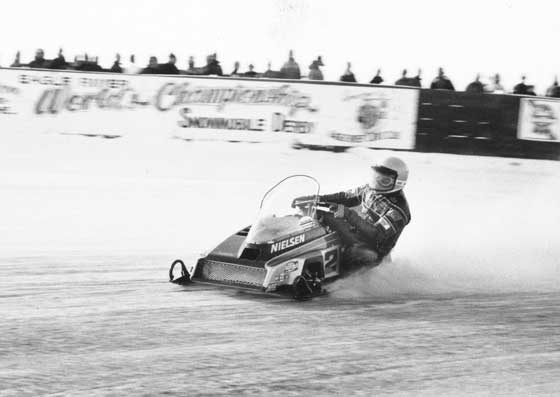 Being thoroughly entertained (and shocked) at stories Jim Dimmerman has been telling in the comments portion of THIS recent Phantom Update post, I decided his stories needed their own dedicated post.

So here are the stories he’s told about Phantom, consolidated here for ease of reading.

Dimmerman has lived an amazing history; has the gift of storytelling; remembers nearly EVERY detail; and enjoys sharing. He and I are talking about some ideas for more of this kind of stuff.

For now, enjoy these memories about the iconic Phantom.

I could just give a yes or no answer to any questions, but I think the real story behind the machine is priceless history. So about engines; yes, it was Rotax powered in 1984. The Phantom started out with a brand new Valcourt Race Shop built 340 (non-RAVE). I think it was 94 hp at 9800 rpm’s.

Now you might ask, how did we get a Bombardier Factory race mill to run in an Arctic Cat sled? Well it takes money and a little deception. Ted and I came up with a plan to go to Chester Duval (then skidoo race team manager) to purchase a new 1984 skidoo twin-track and a spare complete engine package, pipes, carbs, ignition, water still dripping from the manifolds from the dyno.

He jumped at the chance to finally see me park my Arctic Cat and join the ranks on a TwinTrack. Ted paid him in FULL for the package not asking for any sponsorship. No details or promises.

I hope you can understand how much we wanted to win this championship. I was an ex-factory race driver with limited resources. I was digging deep into my bag of tricks trying to win against a very formidable opponent. On the other hand, we were also trying to be prepared by having a Twin Track ready on hand in case the Phantom wasn’t going to be a strong enough piece. The deception was that we never told Chester that the spare engine was going into the Phantom! I had to evade questions from Chester, as well as Brad Hulings (who had moved to Ski-Doo by then), his mechanic Dave “Mouse” Karpik and Jocko (Villeneuve) about my progress on the Twin Track during the pre season prep.

I did, in fact, spend about 30% of my time each day working on the Twin Track prepping it for the upcoming season (the tolerances on the first TT’s were not very well built). It was far from my standards to be ready to ride.

So we waited for test ice to find out how strong this new engine was to be… It was strong at our first test and I felt we should put all our effort into the Phantom package, we left the TwinTrack sit..As a matter of fact I never drove it. It sat it the race shop all year next to me and the Phantom. I never brought it to the test sessions. I was totally focused on the Phantom.

We were running well and winning but at one of the race tracks Mike Wiegnant came to us and offered to build us an engine and pipes to 100 hp. He was a very knowledgeable man and laid out exactly how he would do it. We ran his engine right before Eagle River and won with it. We left it in for the Championship week and the rest of the season. We won a lot of races with it. It wasn’t till 1985 that skidoo came with the RAVE but I never had one.( you can imagine they weren’t going to give one to me!)

The engine in the sled now is not the original, Ted had a spare RAVE from his later TT years and I put that one in so it will run for our exhibition laps at the 50th E.R. Derby…. next, my story about the Chassis, Scorpion, Arctic Cat, Phantom..Who Knows What Lurks Within… the Phantom Knows!

Well here’s the way it was in the Arctic race shop during the fall of 1980. All of the components were arriving; stampings, machined pieces and aluminum panels, ready for assembly right in our shop. Brad Hulings and Mouse Karpik were 40′ away from me on one side, while Bobby Elsner and Durmont Wahl were across on the other side of the shop.

We had assembly tables and equal access to all of these parts. There was nothing separate that said Scorpion and the MFG serial tags said: ARCTIC ENTERPRISES,INC. Now that’s where the “El Samo” ends. Individually we would take these parts and customize them for fit, weight removal,(Mouse coined it whittling wars) and placement. Obviously, this was all overseen by Dennis Zulawski, Roger Gage, and Dave Thompson.

We were each to make 2 machines. I believe they were 340 & 340 X. Basically one spare each. The Scorpions had a different hood and tail than the Cat, so some of the mounting was specific. The engines and pipes were all built by Glen Follett and were within 1 hp of each other. ( you would, however, see us drivers up at the dyno room with coffee and donuts for Glen, hoping a little sugar might find your engine a little more power).

I think you get the picture about the likeness of the two machines…now once the sleds hit the ice, all kinds of changes would start.
That’s another very interesting topic but most of you would have to die if I told you……just like the question from Jeremiah about what’s under my right-side footrest? You’re much too young to pass… He He…Jim

I’d like to comment a little about my choice to pick the Scorpions over the Team Arctic sleds for my Phantom.

Aerodynamics was first on my mind. The Scorpion’s windshield is legendary. You’ve seen the likes of it on Ski-Doo’s formula racers, and even now in Champ sleds. The bubble kind of grows on you, it’s not pretty, but the function surely directs the air around you. My Arctic sled’s hood/windshield fell short of matching this great design.

Remember now, after the demise of Arctic Enterprises, as I’m preparing to go racing with Ted Nielsen, I’m sitting staring at 5 of the BEST and LAST Arctic Sno Pro racesleds in history. I’ve been told I can have 2 of them. So out comes my tape measure and pad and paper and I go to work measuring EVERYTHING.

One of these sleds is Bob Elsner’s non-Z-bar suspension. Durmont came to a conclusion that the Z bar was contributing to a handling problem. He decided to remove the Z bar connecting links and install a sway bar. I remember Bobby saying he liked it but, unfortunately, I never had a chance to drive it.

Should I keep this sled, untried, unproven? I had been driving Z bars for 4 years now, we won the Worlds Championship in 1979 with it.

I am also staring at the current 1981 World Champion sled of Brad’s, of course another Z bar. I had no choice, I had to stick with what I knew and believed in. ( I’ll have to explain the Z bar concept to you some other time, it may be a mystery to some of you). I decided to keep both Scorpions.

I would like to say that Brad Hulings was the BEST snowmobile racer of my time, and arguably of All time. As I dissected and measured these sleds, I continued to find little changes that Brad had incorporated into his machine.

I knew he was smart, but now I could see how he would address a particular issue and solve it. There were several unique innovations that I had come to respect.
He was ahead of Bobby and I as drivers because he had a better “feel” for it. Brad was small guy and manhandling a snowmobile was not in his vocabulary. He made the machine come to him.

So, I took pieces and parts from all the sleds and told Ted the rest can go to the Goodwins, Jeff and Greg. And that’s how it all began…Next the naming of the Phantom (and why).

It was 1981 and the story was just breaking that Arctic Cat would be closing their doors. Those of us on Team Arctic and the people who worked at Cat knew it was coming.

Team Arctic had become a way of life for me for 4 years.  A one-in-a-million job. I thought as long as I continued to win my fair share, I’ll become a “Lifer” just like Larry Coltom and Dave Thompson…

Team Arctic was a family that had just been ordered to disband, quickly. Find your own way. No job placements just take your things and go home… My heart was crushed inside.

Ted Nielsen came to me at the Alexandria Race in 1981, he asked me into his race trailer. He said the he had heard some rumors about Arctic’s demise and wondered if I would consider racing for him. I told him I’d think about it…

Brad Hulings was hired to drive for Ski-Doo along with Jacques Villeneuve. WOW…what a powerhouse!

Next thing I knew, I was standing with Ted in my new race shop in Lake Villa, IL. I decided to drag this guy into a seemingly insurmountable task of beating Factory Ski-Doo. But I knew that I would bring with me the dedication and knowledge of Team Arctic.

I would come back as “The Phantom” to continue on the Cat legacy and represent the Independence of Nielsen Enterprises. My Team Arctic buddies were sure to watch so I was motivated to do my best. I looked at Ted and saw a man who was just as determined.

Boy was I right…

And so concludes the Phantom chapter of the Jim Dimmerman Story.

Thanks to Jim’s graciousness, there will be a standalone chapter on his ultimate triumph aboard the Phantom at the 1984 World’s Championship… a win made possible both by Ted Nielsen and all that Dimmerman learned from his years on Team Arctic.

Yet to understand the significance of that win – for Dimmerman and the legion of Arctic Cat people – we must first know the story of how Dimmerman came to the Sno Pro arena and to the legendary Team Arctic program.

Stay tuned for the next chapter in the Jim Dimmerman Story.