The Hidden Beauty of a Barn Find

Not a month goes by without someone telling me they know of some old snowmobiles sitting in a barn somewhere. Usually the tip comes from someone who isn’t a snowmobiler (or who only has a cursory knowledge of sleds) and who completely misrepresents the sleds they speak of.

If I had a dollar for every machine that was:

B. A racing model

D. All the above;

…I would be rich enough to own a pristine-condition King Cat.

Consequently, I long ago quit expecting to uncover a Holy Grail such as Bob Elsner’s 1979 World Championship-winning Arctic Cat Sno Pro, or even a ’75 Z.

When you step back and consider the actual production numbers of snowmobiles built over the years, by far the greatest likelihood is that, when the barn door slides open, the encrusted machine is a Panther, Charger, Olympique or any other standard snowmobile.

Which isn’t to say that I don’t still get amped up every time I endeavor to see one of the barn sleds I’ve been told of. Quite the opposite, actually.

It is the story-sharing aspect of the whole experience that is invariably most enjoyable. Fact is, I never grow tired hearing tales of thrilling speeds, incessant breakdowns, close calls with open water and/or barbed wire, and family rides with bundled-up kids. Such stories are often seasoned by the embellishments of time and the exaggerations of memory, but they speak a truth that is universal among snowmobilers.

It should also be noted that barn find trips aren’t always blissful. There’s always a feint aroma of stale gas that leaches onto my hands and/or clothing. There’s a high likelihood of contracting poison ivy. And I’m frequently relieved to know I’ve had a tetanus shot within the last seven years.

While I’m likely to get a gash or step on a nail, it’s rare that I return from a barn trip with a sled in the back of my pickup. However, I still ALWAYS bring cash… just in case. Yet while money seldom exchanges hands on my barn trips, there is a transaction that always occurs.  It’s the trading of our most precious commodity… time… for the experience of opening a door to see what’s inside.

Unfortunately for my wife, I spend time like a drunken sailor spends money. Smartly, she automatically adds the 2X multiplier to whatever timeframe I claim such trips will require. Nevertheless, as a busy parent with two kids, I have to squeeze barn trips into short windows of opportunity that usually leave me rushed and racing the last wisps of fading sunlight.

Alas, you can never have enough time, enough snowmobiles or enough storage space.

I sometimes wonder if, 30 years from now, some stranger will be in my garage/barn, delicately stepping around my own lifetime of accumulated junk in order to pull the cover off of some sled, hopeful for rare gem that simply needs a good clean?

If it does happen, I’ll be certain to point him towards the old Jag in the tree line, the one surrounded in poison ivy. 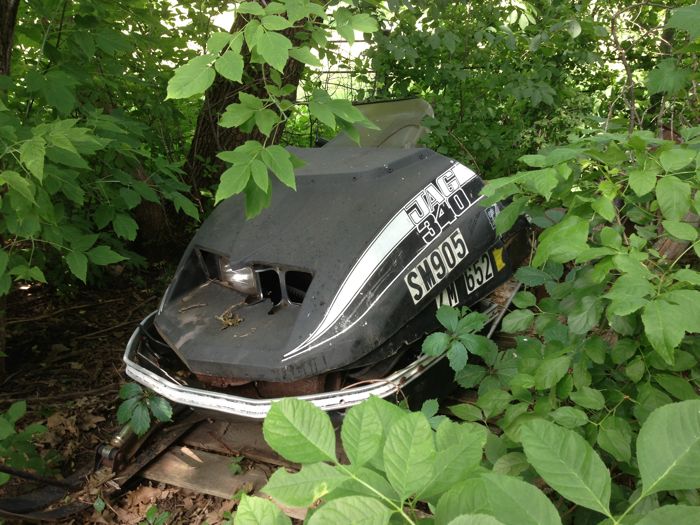