Tis’ the summer of Road Trips for some Arctic Cat people, and I got in on the action early this week with my friends Tom Rowland (left) of Thomas Sno Sports and Jim Dimmerman (right) of Team Arctic fame. Previous road trips with these goons have been highlights of my summer, so of course I was eager to join them on a quick trip to Thief River Falls.

The stated purpose of the trip was for Rowland to pick up a couple “retired” race sleds for his collection, and for an evening BBQ with fellow Arctic Cat friends Greg Spaulding and Larry Coltom.

Our first stop was the Team Arctic Race Shop, where Rowland looked over one of the two sleds he was purchasing: the very ZR 6000R SX Pro Open sled raced by former Factory snocrosser Cody Thomsen for the past few seasons. Yep, this is a fully modified factory racer loaded with all sorts of cool stuff.

Making the purchase especially meaningful to Rowland is the fact that his son Mitch worked day-and-night on this sled for a couple seasons as a mechanic for the team.

Wes Selby’s 2016 ZR 6000R XC race sled was the other machine that Rowland was purchasing. Selby won one USXC Pro class Championship and finished second in another last season, which makes this a pretty cool and rare sled.

Activities in the Race Shop have started to rev up following a short period early in the summer when the pace was normal. Here Dimmerman chats with Race Manager Mike Kloety about some of the moving and shaking that occurs during the off-season.

Parked on one end of the shop: six of the special Soo/Enduro mod sleds built last season and available to interested racers. Most of these are spoken for, but it sounds like one or two are still available.

There are always a few things to spot when walking around the race shop, such as this cylinder head, which had been used in Selby’s Mod USXC sled that he won the championship with.

Always one to dig a little deeper, Dimmerman cc’d the head to ensure it meets ISR specifications.

Dimmerman is most keen on clutching, however, so it was no surprise he gravitated to a batch that were on the bench, ready for calibration.

Cat Master Training legend Greg Harris (right) happened through while we were there. The two longtime friends traded a few stories while catching up with each other.

With the two race sleds loaded into Rowland’s trailer, part one of the trip was complete.

Part two involved Rowland and Dimmerman taking a lap around Arctic Cat Special Services (aka: Salvage), to get a strong visual of machines that might interest Rowland.

While they were picking through sleds, I hustled over to the main plant to see what machines were on the various assembly lines.

2017 XF 6000 High Country models were on the snowmobile line, including orange ones…

ZR 120 snowmobiles were on what is normally the ATV line. As is always the case when I see machines on the assembly line, I smile at the experiences and excitement that their future owners will surely feel. This is especially true when I think about a kid getting a 120!

Curiosity satisfied, I left the production area to rejoin the goonsters for parts three and four of our TRF road trip.

Part three was stop to see our friend John Anderson. Anderson is an ATV Engineer and a motorhead to the core. He rebuilds and restores all kinds of cool stuff in his sweet shop, which is one of my favorite such places in the whole world.

In addition to the funky Plymouth, Anderson took the wraps off of a recent restoration of his: a famed (or, more accurately, infamous) Moto-Ski Bullet.

Anderson always has good background stories about snowmobiles. Regarding the Bullet, he believes that the failed project essentially bankrupted the company and made them the prime target of a purchase by Bombardier back in the early 1970s.

All of the Bullets were supposed to have been recalled and destroyed. But like we’ve so often seen, there were always a few cowboys working at various companies who diverted some of the stuff away from the crusher and into the hands of fans. Forty-five years later, it’s WAY cooler and more interesting that the survivors see daylight and their stories shared.

Anderson also gave us a history lesson on the old JLO engine with the “turned” cylinder head where the cooling fins were at an angle to the front of the sled, rather than inline with the sled.

Anderson has all kinds of cool vintage stuff, including the classic wall clock with Dimmerman’s Sno Pro racing action. After an accidental mishap with some cleaning chemicals that ruined Dimmerman’s own clock some years ago, Dimmerman himself is looking to procure a good condition version (or pictured sleeve) for himself. So if you know anyone…

After getting the quick tour of Anderson’s shop, we headed out to the fourth and final part of the TRF trip: dinner at Greg Spaulding’s house.

Spaulding lives out in “the country” about 15 minutes from TRF. When we arrived, our jaws dropped at the sight of his vast collection of 150-or-so sleds lined up proper on plastic tarps.

After handshakes and some typical joking among the group, Spaulding confirmed that the reason these sleds were organized and in the process of getting cleaned was that he’s going to auction them off on Sept. 17! 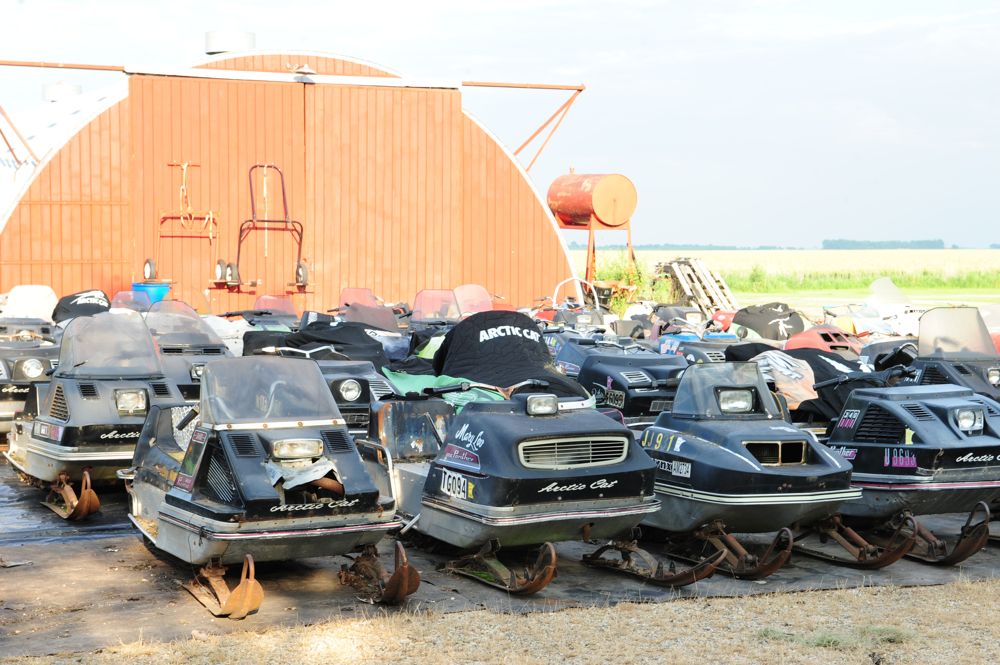 There’s a whole bunch of cool machines in the collection, which Spaulding accumulated over a period of time in the early 2000s. He used some machines to help engineer and built reproduction parts for his side business, Spaulding Vintage Snowmobile.

But life and time have a nasty habit of getting away from us, and Spaulding is ready to part with these machines to start his next chapter. So he’s having an auction, and everyone’s invited (I’ll have more info on this in the coming weeks).

Not just Cats and Doos either, but lots of other colors to boot!

There are some gems for the Arctic Cat faithful, inlcuding these tigers.

Check out the belt: Team Arctic Sno Pro. Anyone know the story behind it?

And check out the roller bearing on the drive clutch shaft! What’s old is new again (a similar concept is used on the new-for-2017 9000-Series models that will forever change the game when it comes to consistent clutching performance). 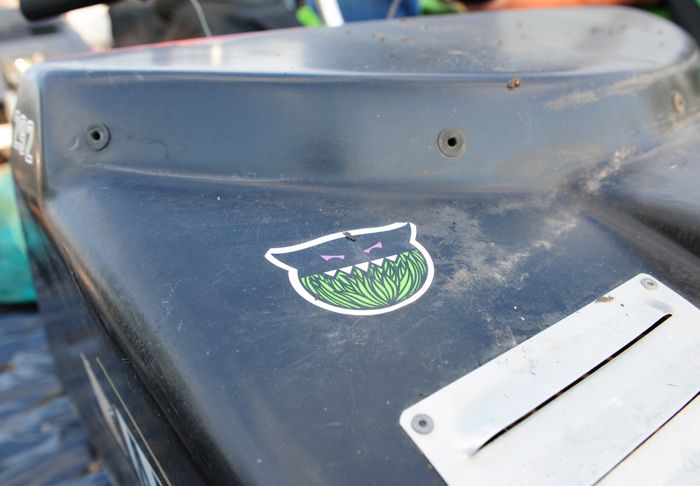 And where can I find an unused Grass Cat decal like the one on this hood?

Inside Spaulding’s shop, Dimmerman gets a tour from the man himself.

Spaulding is one of a very, very small handful of engineers whose knowledge of 2-stroke engines is among the strongest in all of motorsports.

After touring the vintage sleds and shop, we spent the rest of the evening laughing at the stories told by Larry Coltom (back to camera), Spaulding and Dimmerman. For Nikki Spaulding, Rowland and myself, it was a few hours of shaking our heads at what goofballs these guys are, and what amazing history they’ve experienced.

I wish I could share every story I heard that night, but for now I’ll leave you with this gem from Coltom:

WAY back in the very early days of Arctic Cat, before there was a factory team, Coltom had competed in a local race or two (and won one of them, if I remember correctly).

Well sometime in the latter half of the 1960s, the company decided it was going to have a factory team. So a sign-up sheet was posted at Cat for people to add their name to if they were interested in being on the team.

Young, married only for a year or so and with a young child, Coltom was interested in racing but thought it more prudent to stay working on the assembly line.

His boss at the time was gruff man who intimidated the heck out of people. He knew that Coltom had raced a couple times and was surprised that he hadn’t seen his name on the sign-up sheet. So one day he confronted Coltom about it, kind of asking Coltom about signing up but also kind of telling him to sign up.

That extra little urging was all Coltom needed.

He penned his name to the sheet, was selected to be on the team and would go on to become one of the most decorated racers of all time. He would transition to be a key member of Arctic Cat’s engineering team, and to this day his clutch calibration and seat-of-the-pants input on all areas of snowmobile performance continue to make Arctic Cat snowmobiles as good as can be.

For the past five years, an image of Coltom during his 1976 Sno Pro Championship season is the image everyone sees when they walk into Arctic Cat in TRF (this photo was taken a few years ago).

Funny, what one little “push” of encouragement did to the history of snowmobile racing and of Arctic Cat.

And with that, I’ll end this little story of another great road trip.