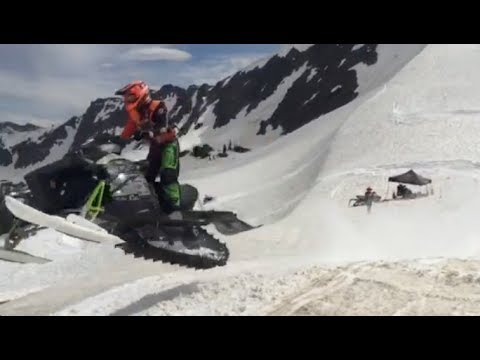 Team Arctic’s Tucker Hibbert and Logan Christian will head into stock-class snocross battle this season on an all-new 2018 ZR 6000R SX race sled that they spent considerable time and testing this past spring.

Here’s a snipit of Tucker and Logan doing a lap on prototypes of the machine. THEN scroll to read what they have to say about the big changes to the track, front suspension and rider ergo’s.

REGARDING THE REVISED ARS FRONT SUSPENSION:

• “This is a huge improvement! The changes to caster, camber and bump-steer made a huge improvement in handling, especially in the big holes that you have to slam into. The sled [now] goes straighter through the bumps and doesn’t kick sideways. This is a change I felt all the time, on every bump. It’s a night-and-day improvement.

“Also, because of the increased distance from the ground to the lower A-arm, snow doesn’t hit the A-arms and scrub speed. This is really key on big landings.”

• “This was the change that made the biggest difference. It’s substantially better everywhere on the track. You can drive ski-first into the bumps if you have to and never loose speed. It turns sharper while preventing the sled from wanting to tip up. And there’s less feedback into the handlebars and arms.”

• “The long track is really good, especially on the start. It’s a big improvement because of better traction. It’s also more stable when going through whooped out holes, it keeps the sled tracking straighter and stays on top of the holes rather than dropping into them. It also helps the sled turn better in a lot of conditions, because it doesn’t let the sled transfer, or squat, like the short track.”

• “I’ve always been a fan of the longer track on my Open sled because of the way it handles through the bumps. The sled stays straighter and it feels like I can manual over the bumps better. And I can drive it harder into the corners without worrying about losing the back end of the sled while trying to slide it around.”

• “Another big improvement. The side panels are narrower and sleeker at the back, which makes maneuvering around the sled a lot easier. My leg doesn’t hit the sides [of the panels] like on the old sled.”

• “The narrowness of the new sled makes it a lot easier to lean forward and off to the side while cornering, so you can put a lot more pressure on the skis. The seat is nice for the bumps. And with the gas cap moved away from the front of the seat, it’s great to have cushioning in that area. It’s really easy to move around the snowmobile.”