Man, where DOES the time go? It had been a few months since my last trip to Thief Rivers Falls and Arctic Cat. Way too long if you ask me. It won’t happen again, I promise.

Fortunately I’m back on track after spending a couple days there this past week, where I joined Kale Wainer (above) on various snowmobile, ATV and UTV projects that you’ll see over the coming weeks and months. 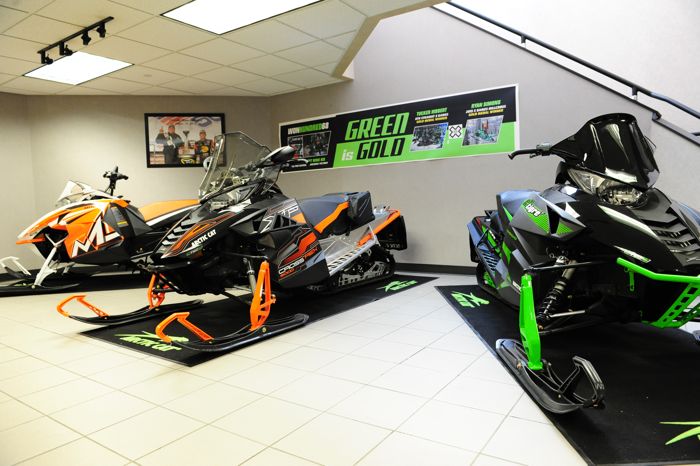 I’m always curious what will be on display inside the entrance. This time it was a snowmobile display of 2016 models including an M series, CrossTrek 9000 and an El Tigre package ZR9000.

This sight combined with the familiar industrial scent of manufacturing immediately pulled the rope on my waiting-for-winter engine! It’s only June, and even though I have a lot of stuff planned for this summer (including some cool Wildcat rides), I had my first strong longing for the upcoming winter. The processes that produce that wonderful scent produced by welding, painting and myriad other manufacturing steps that culminate with the assembly and production of Arctic Cat snowmobiles, ATVs and ROVs. 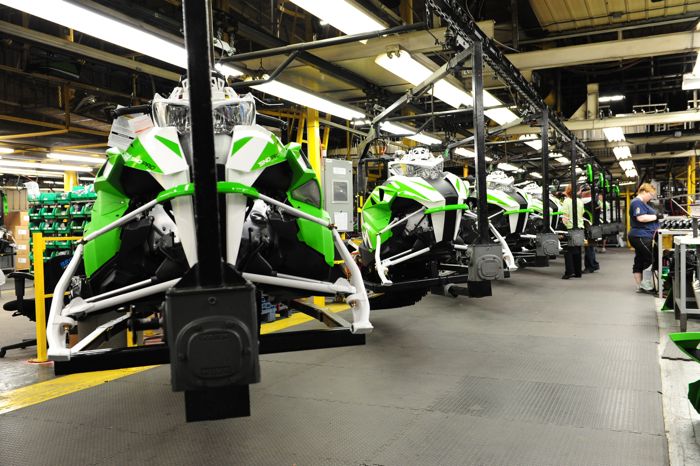 This week the wheeled machines were on a short break but the snowmobiles were rolling down the line like clockwork. 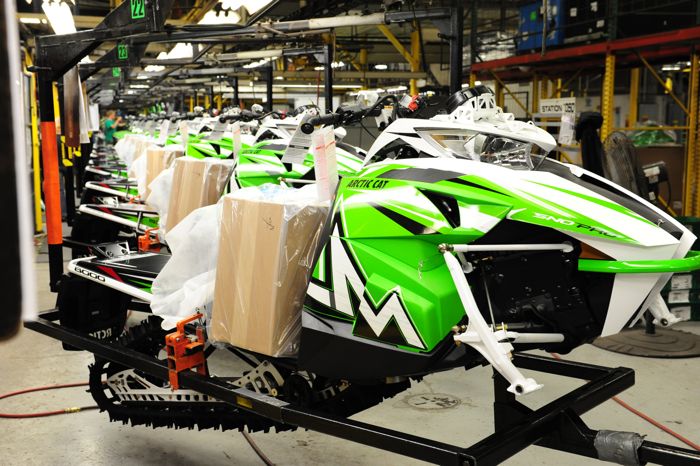 …as a whole bunch of 2016 ZR120 models were being built on what is normally the ATV line.

In the more than 25 years I’ve been going to Arctic Cat, this was the first time I’ve timed it perfectly to see 120 (or Kitty Cat) production.

It was significant for me because every single time I see an ATV or snowmobile on the assembly line, I think of the person who will eventually own it. I think of the build up to their decision to buy one, and then of the anticipation and excitement they feel once they’ve decided to get one. And then the day that he or she gets the machine at the dealer and brings it home. That first time it’s in the garage and he’s sitting on it, imagining all the rides.

We all know those feelings; they’re so powerful that they’re nearly glorious. Especially for that first machine that we get.

Now… think about what it’s like for a kid who wants a 120. Incredible!

That’s what I was thinking about when I saw all these little dreams being built. There will be memories made on these machines that will last a lifetime. These first tracks will lead to decades of trails and adventures.

Some kids who get the batch of 120s built this week will become Team Arctic racers. Some will ride snowmobiles to school when they’re old enough. Others will enjoy they’re favorite vacations on snowmobile trips with their family.

Some will make huge life decisions based on their passion for the sport, such as where they go to college or trade school, where they live as adults and even whom they marry.

Such is the life-affecting gravity that begins when they first throw a leg over these cool little snowmobiles.

Whew, powerful stuff! I’ll keep it lighter for the rest of this post. But let it be known that seeing those sleds on the assembly line was my favorite site of the whole trip. 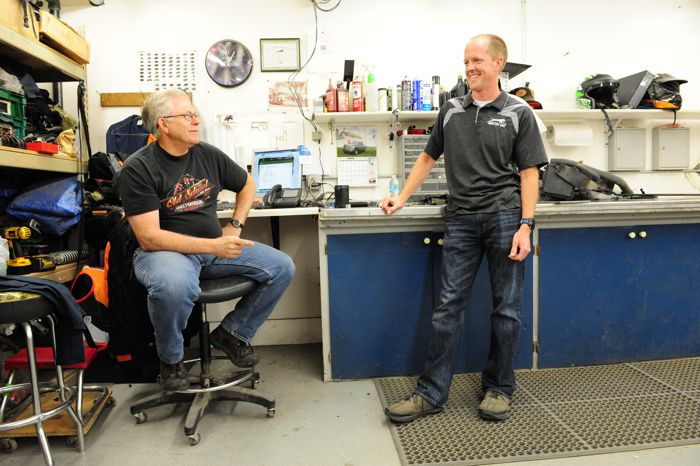 Seeing these two guys inside the ATV Engineering shop also put a smile on my face!

John Anderson (left) and Ryan Hughes are two guys who fully understand the passion that’s home to Arctic Cat. Anderson is a Service Technician (who happens to be a vintage snowmobile fanatic) and Hughes is the Product Team Manager of the Utility ROV models (such as the Prowlers) who has been at Arctic Cat since 2003.

These guys were hard at work on the 2016 models, which will be pretty dang kickass and unveiled later this year. 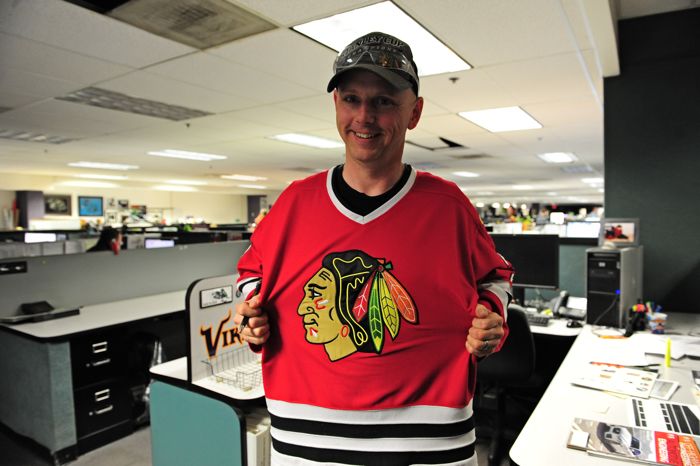 Corey Friesen is another guy who feels the passion for Arctic Cat, as well as the Chicago Blackhawks.

Friesen is the Senior Graphics Stylist at Arctic Cat and one of the most die-hard puckheads I know. He was pretty pumped about Chicago taking the Cup on Monday.

He was also pretty pumped about the 2017 Arctic Cat snowmobile graphics he’d been working on about 10 minutes before I shot this photo. I didn’t get a chance to see them, but Corey promised a look the next time I was in town. I’ll let you know what I think after I see them. 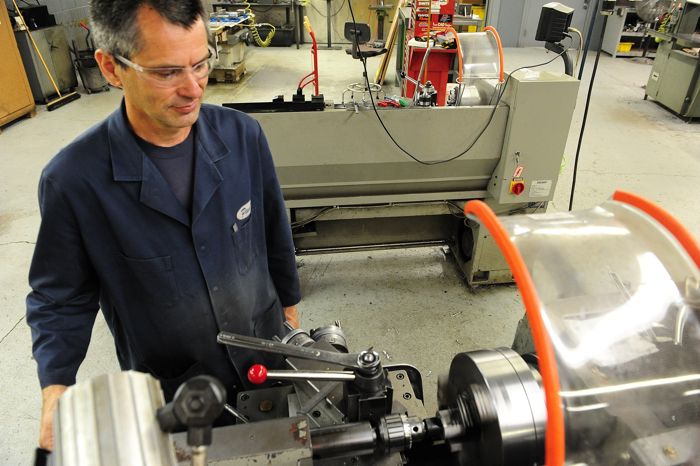 A few minutes later I was walking through the Arctic Cat machine shop area and saw a couple friends working on stuff. Steve “Abe” Broten was working his magic on the lathe. Monday this week marked his 26th year at Arctic Cat! Congrats Steve. 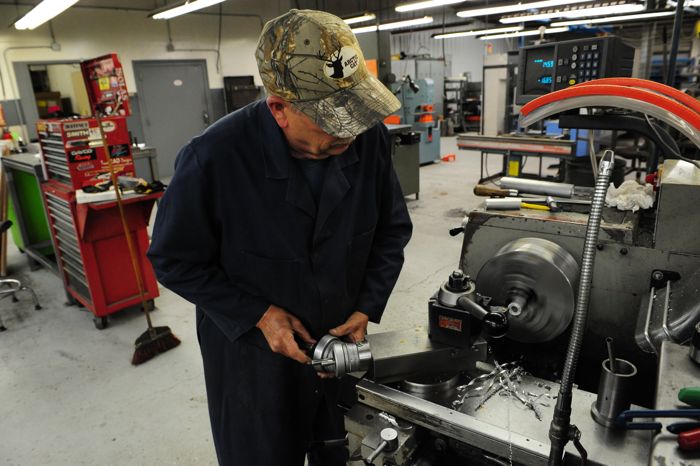 Mike McArdle was fabricating a fitting for use in the snowmobile engine dyno room that he operates.

It always impresses me when engineers like McArdle, who don’t fabricate for a living, can whip stuff up on a press or lathe as if they do it 40 hours every week. 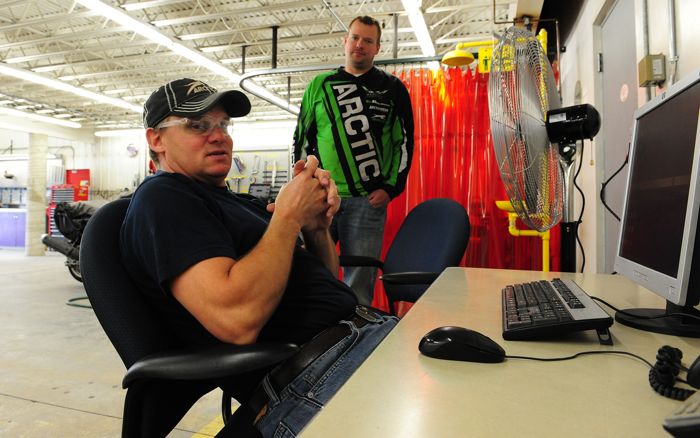 After chatting a few moments with Mike, I met up with snowmobile engineer Bart Magner (left, shown talking with Ben Salentiny).

Bart works as Drive Engineer in the Drivetrain group at Arctic Cat, whose job is to finalize clutch calibrations on snowmobiles. Bart can ride a snowmobile for two minutes and tell you everything that it’s doing. Literally. Like whether it’s clutched one gram too heavy on the weights; if the suspension needs more rebound dampening; if the engine is running too lean off-idle; if a slight vibration in the footwell originates from the belt or the track; and a hundred other things. He notices EVERYTHING and he knows how to calibrate for them.

Bart can also ride a snowmobile as fast as anyone I know, and has been known to win snowmobile races whenever he gets the urge to compete.

There are a lot of people at Arctic Cat who do an exceptional job each and every day, but most of the world seldom hears about them. Bart is one such person.

He agreed to let me interview him in the coming weeks, albeit reluctantly because he’s so dang modest. I needed to get a couple pix of him for the interview. 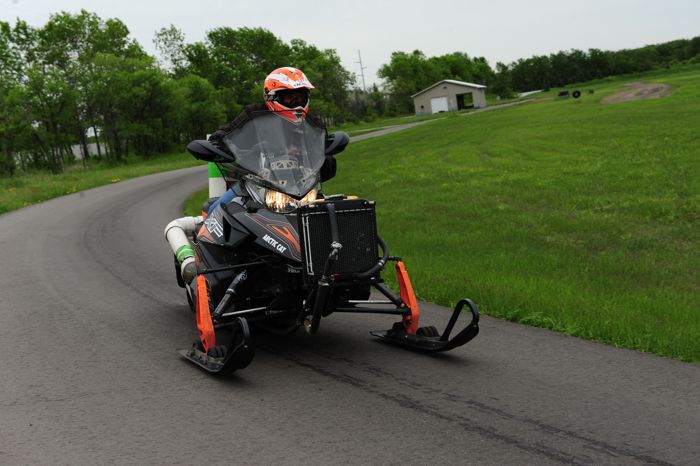 After shooting the pix, he needed to run a 2016 CrossTrek 8000 a few laps on the paved Arctic Cat test track. 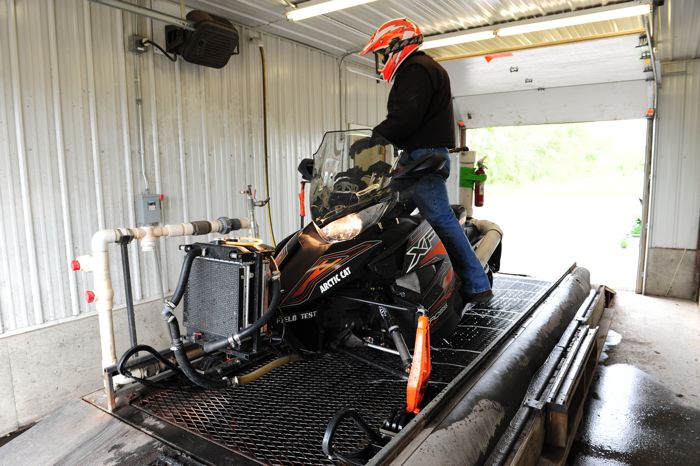 He rode a dozen or so laps, stopping in the water shed on every fourth to fill up the slide lube system and cool the track. 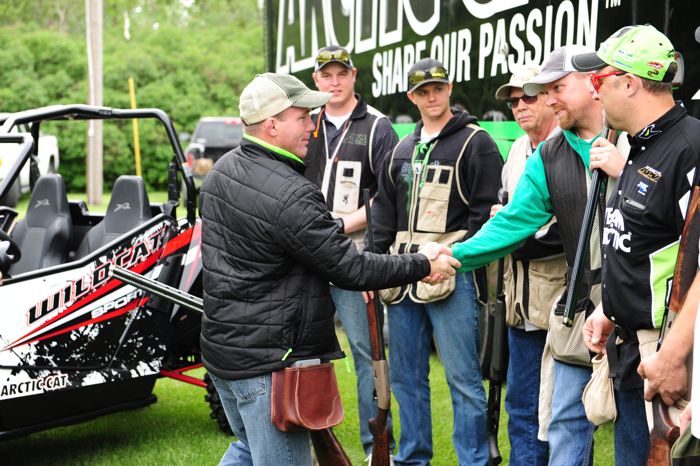 A cool extracurricular event was going on this week at Arctic Cat: a visit from Matt Hughes (left), the 9-time UFC Welterweight champion and Hall of Famer.

Hughes retired from UFC competition in 2013. Now he’s the host of Uncaged with Matt Hughes, an un-scripted reality TV show based on his life and hunting adventures. He was at Arctic Cat filming an upcoming episode for the third season of the show, and part of the visit included an evening of shooting sporting clays at the TRF gun club with a group of Arctic Cat employees. 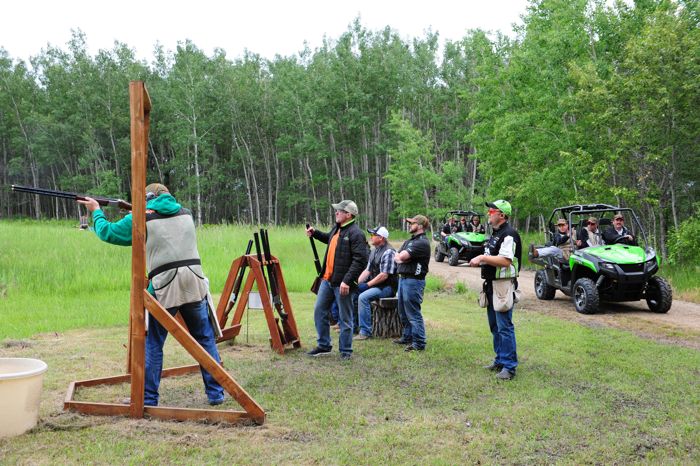 The Wednesday night sporting clay league is woven into the fabric of life for some Arctic Cat people. 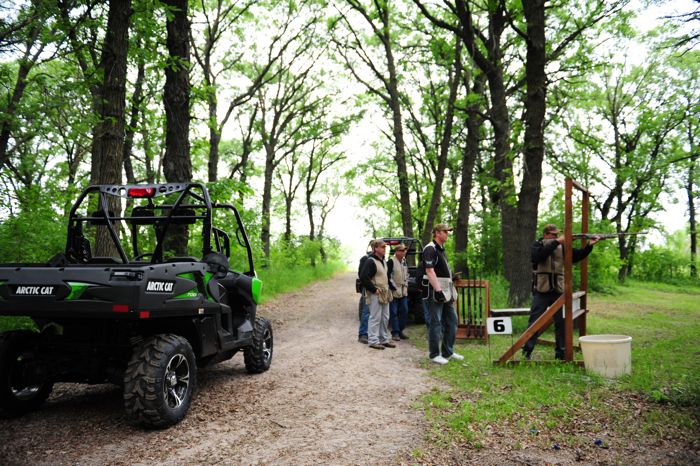 Having Hughes join the group was pretty cool, in part because he’s a genuinely good guy who loves the sport, and because he’s just a regular guy when he’s not in the ring. 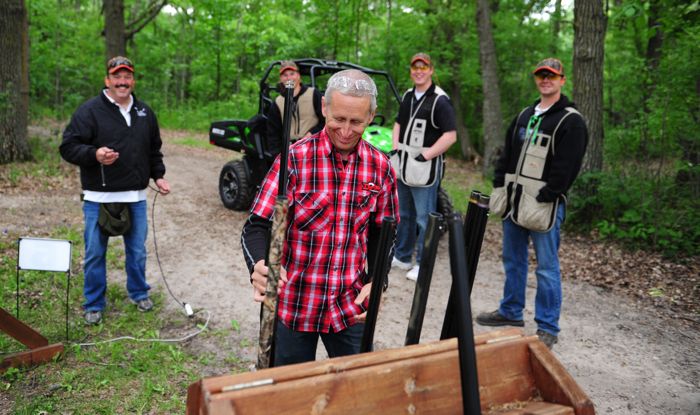 Conversely, I must NOT be a genuinely good guy or a regular guy in any situation outside of the ring, because everyone laughs at me when I whiff shooting at clay pigeons.

As if missing shots and getting laughed at by your friends isn’t bad enough, things really turned south for me when I challenged Hughes to one round of fighting. 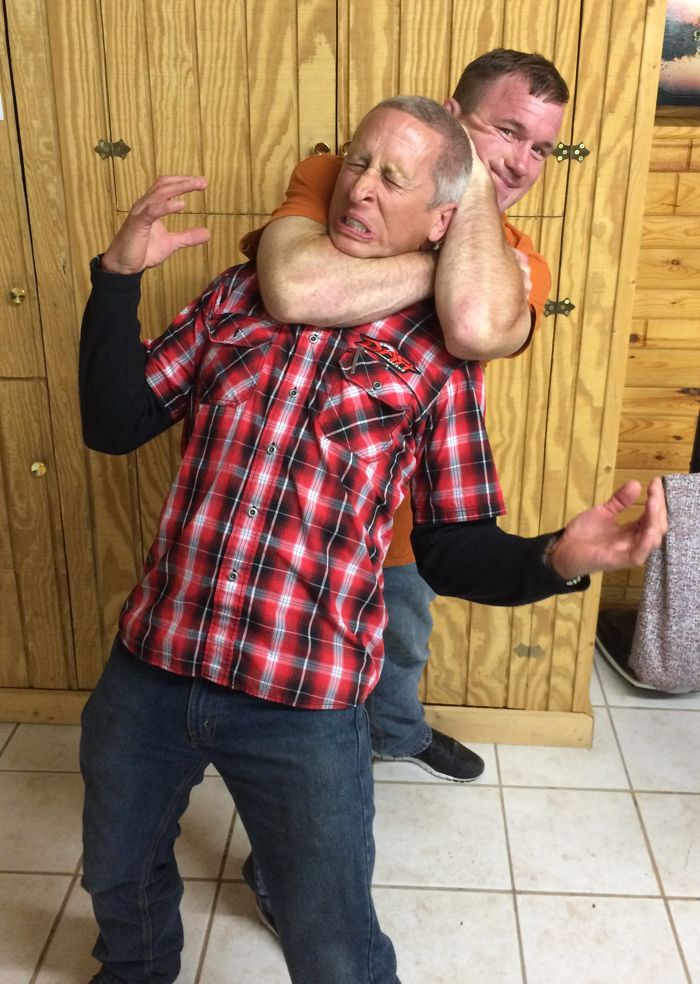 The fight lasted 2.1 seconds before I tapped out and crumpled to the ground in a puddle of what-the-hell-just-happened?, so ending my very brief career as an aspiring fighter.

It was lights-out for me and for my first day in TRF. 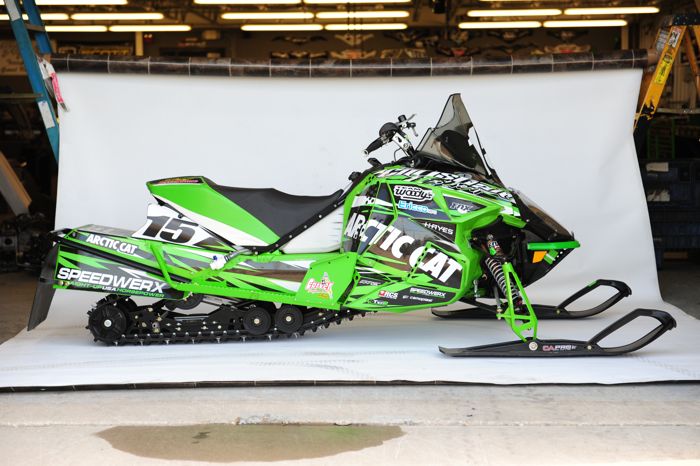 Day two was spent at the Team Arctic Race Shop, where I captured photos of various sleds for an upcoming expose like this one on Ryan Simons’ X Games-winning Hillcross sled.

The star of this photo shoot was the 2015 Arctic Cat ZR6000R mod sled that won this year’s Soo 500 enduro at the capable hands of Team Arctic’s Brian Dick and Wes Selby. 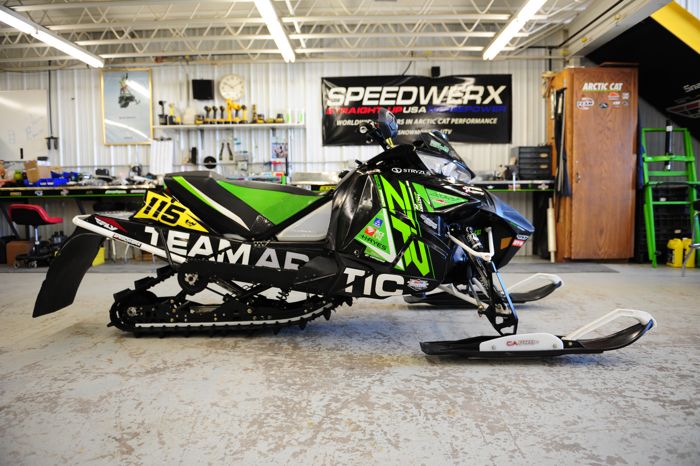 I also took pix of the ISOC Amateur class-winning snocrosser of Team Arctic’s Trent Wittwer. It’s a stocker, but it has some pretty cool tricks that personalize it for Trent. And I finished off the hero shots by grabbing a few pix of Wes Selby (center) with his three race-winning sleds from this past season. On the left is his mod hillcrosser/hillclimber that collected a couple wins at the end of the season. That’s the Soo 500 winner on the right, of course. And in the middle is his stock ZR6000R XC sled on which he scored wins in two USXC races and took a close second in points (behind teammate Zach Herfindahl).

That’s Team Arctic Race Manager Mike Kloety on the right, joining me in pointing at the all-star Selby. 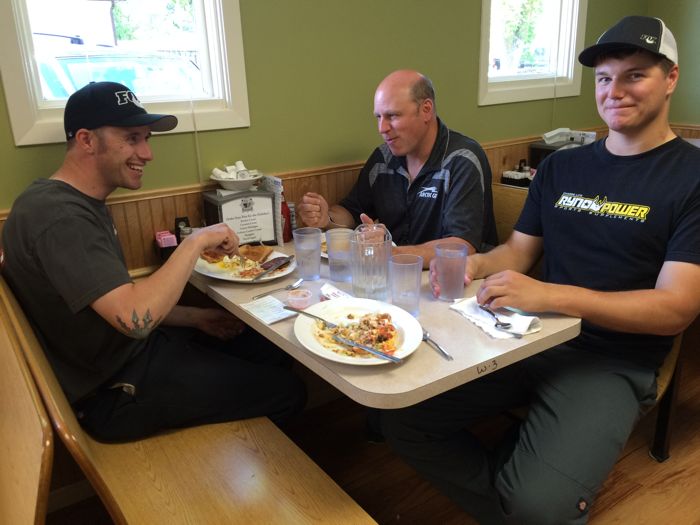 We needed nourishment after the arduous, energy-sapping photo shoot, so Selby, Kloety, Ben Langaas (right) and I headed to Biff’s (formerly Dee’s) where we loaded up on calories and laughed about how I got my butt kicked by Matt Hughes the evening prior. After lunch it was back to the Race Shop where, lo-and-behold, in walks (L-to-R) Team Arctic champion Jim Dimmerman, Kale Wainer and Tom Rowland from Thomas Sno Sports. 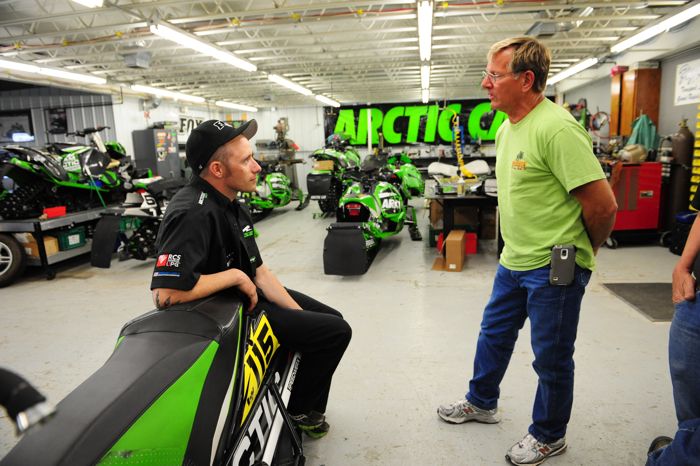 Dimmerman spent untold hours in the former Team Arctic Race Shop during his career as a factory Sno Pro racer beginning in 1978.

He had never been to the new location, so he had all kinds of questions for Selby about what goes on in the shop these days and how it compared to his time. 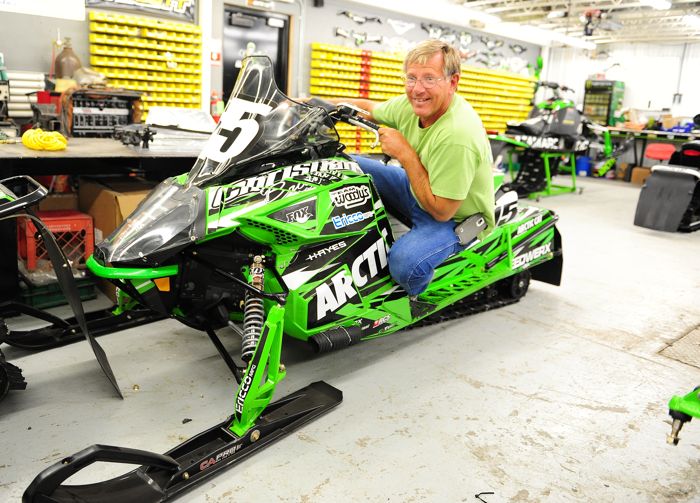 Always a good sport for my goofball requests, Dimmerman shows his hang-it-out style on the Soo 500 winning sled.

I can’t be the only person who truly would love to see Dimmerman hang it out on an oval track again someday. It was good to see Dimmerman and Rowland, but it was also time to head for home, stopping at the Christian Brothers Race Shop in Fertile, Minn., where nine ZR6000R race sleds are being built into enduro/Soo sleds for the upcoming season. The sleds, which are identical replicas to the ’15 winner, will be for sale to Team Arctic enduro racers. I’ll have a story on this project soon.

That’s all for this trip. I promise another one in July!