The winter of 2014 has been truly outstanding for Minnesota (and many states/provinces). But all good things must come to an end, and with a couple weeks of warm temps, much of Minnesota has turned brown.

But the weather and temps throughout “most” of Minny doesn’t mean beans when it comes to the iconic North Shore, the name given to the rugged shoreline of Lake Superior that curves northeast from Duluth to Canada.

No sir, the North Shore was still in the middle of winter when we arrived at the park-and-ride lot outside of Two Harbors last Wednesday.

Like last year, a group of delinquent friends and I came here for one last hurrah, to put an exclamation mark on a great season of sledding.

On a day in which temps hit the 80s in southwest Minnesota, we enjoyed 50s and sunshine. It isn’t often that you can comfortably wear shorts while unloading for a snowmobile ride, but that’s exactly what Kale Wainer did on this occasion. 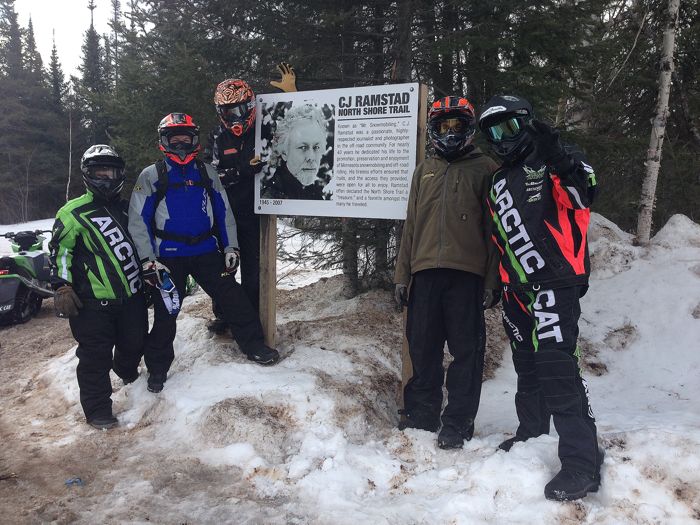 We posed by the C.J. Ramstad Memorial Trail sign prior to departure to honor our friend and colleague who most certainly would have been on this ride had he not died in an automobile accident in 2007. 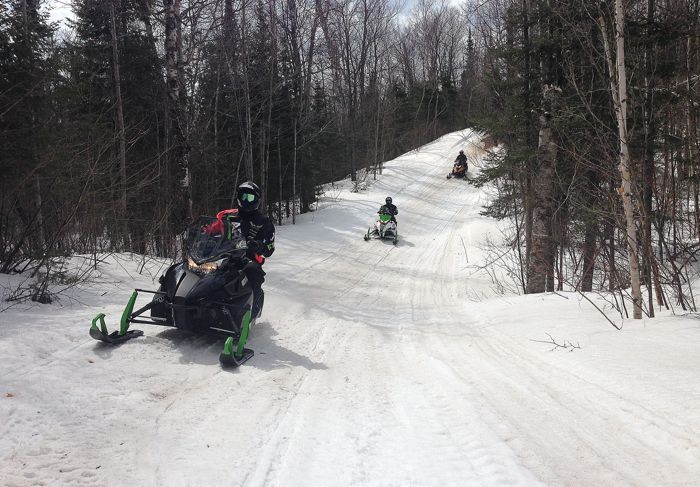 We all expected a lot of dirt and crummy conditions, but a winter’s worth of huge snow requires more than just a couple weeks of warmth.

Consequently, the trail was in fantastic condition! 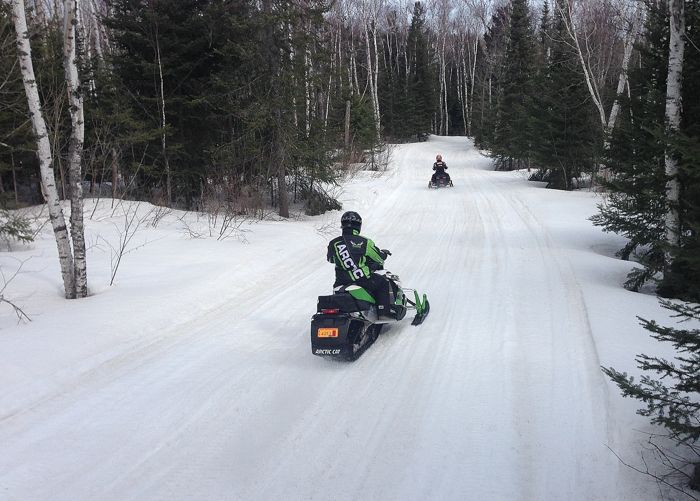 I think of this 153-mile trail from Duluth to Grand Marais as snowmobiling’s equivalent of California’s Pacific Coast Highway: a wide, curvy, hilly route that’s thrilling and scenic. 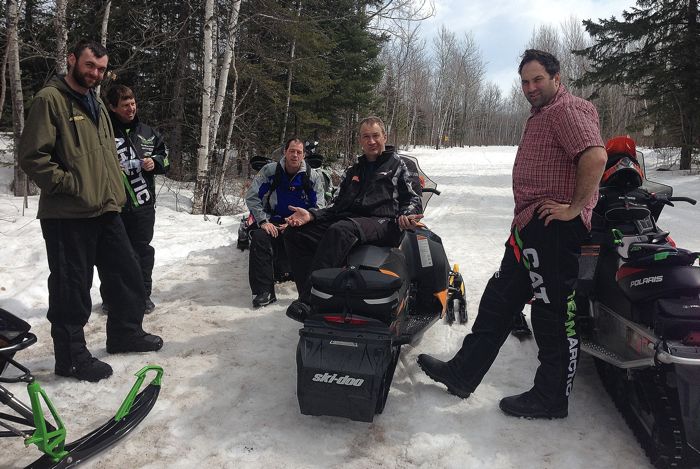 Our destination would have been Grand Marais if this had been January. But there’s a different mentality that hits us when it’s a springtime ride and we’ve already enjoyed a high mileage winter. We shot more photos, stopped to BS more and lingered far longer during the stops.

It was a day for hanging out as much as it was for riding.

Of course temps in the 50s certainly encouraged the frequent and long BS stops. 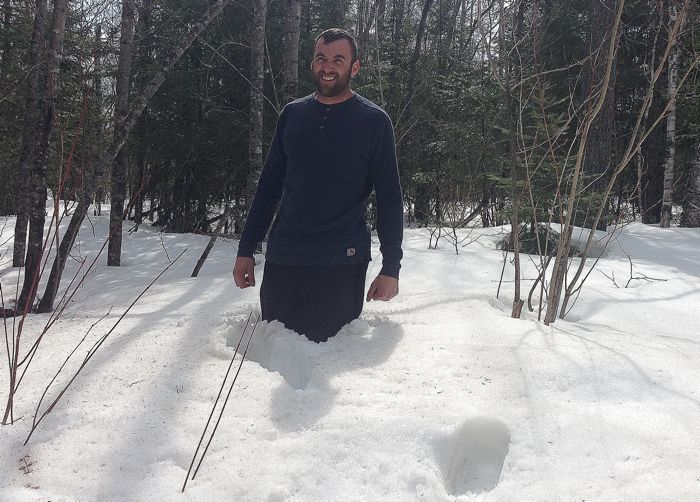 Chad Davis proves how much snow was still on the ground. 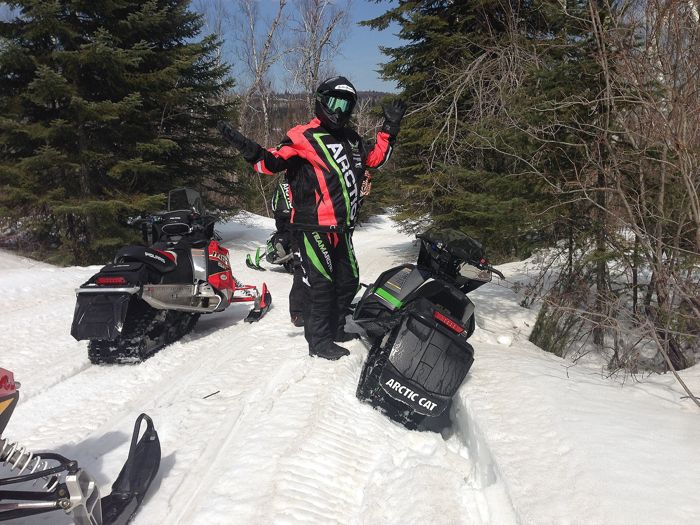 In fact, there was so much snow that getting off the groomed surface required lots of throttle and finesse, which Kale showed neither of when he nonchalantly put MY sled into the thick stuff.

Little did we know how this little brain fart just 30 miles into the ride would set off a series of events that made for a funny, memorable day on the trails… 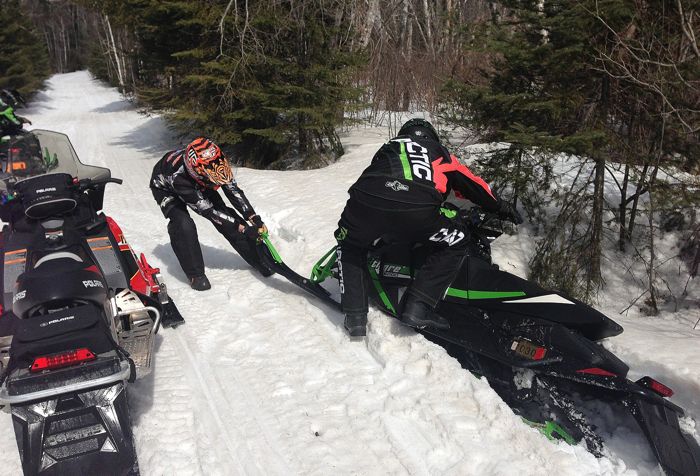 At first Pat jumped in to pull a ski… 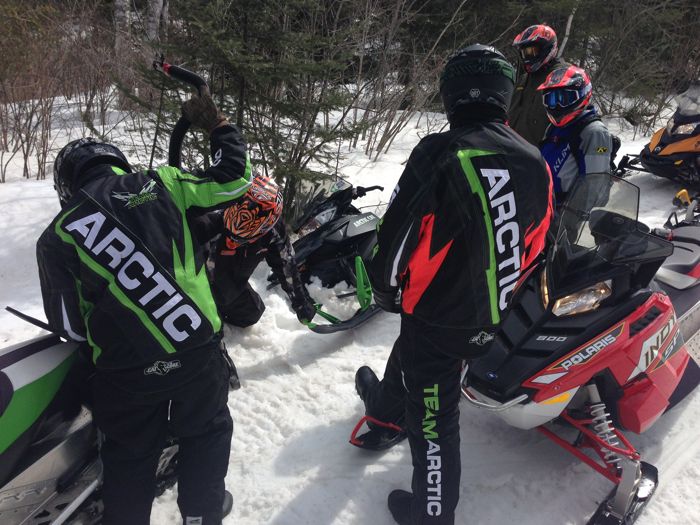 “STOP,” yelled Tom Rowland, “I have a better solution: the Snow Bungee!”

The rest of us took a step back as Tom grabbed the stretchy tow strap made just for such situations and then attached one end to his rear bumper and the other end to MY stuck Tiger.

As Snow Bunge virgins, the rest of us just stared with glassy-eyed wonder…

Tom had perfect form on his 2015 XF6000. He was wearing the proper gear and exuding the can-do attitude he’s known for.

Likewise, Kale was channeling Rob Kincaid, David McClure, the Tapio brothers, the Zollingers, the Tuppers, Chris Burandt (pre-2009) and every Team Arctic racer who’s ever gone over the top at Jackson.

He was fully committed to uphold the grand tradition of side-hilling and side-boarding.

There was just one small problem… 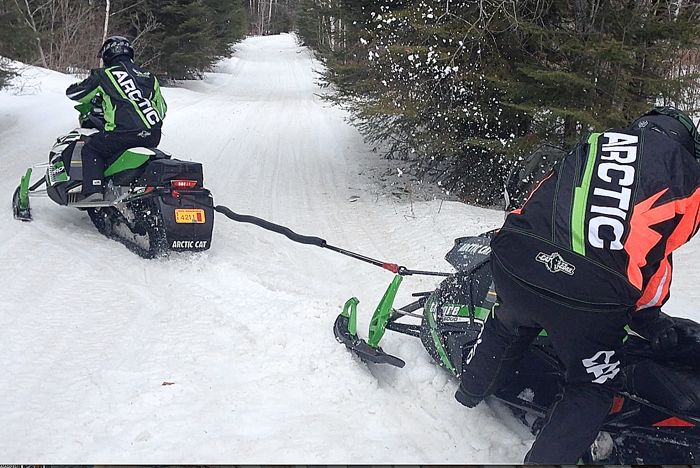 …the Snow Bungee was attached to the upper A-arm on MY Tiger.

We immediately realized the folly of this decision when we heard the metal snap and saw the spindle contort into all-new prototype front-end geometry.

Look close; you can see what I’m talking about.

Before making ANY other moves, we had Tom pose with the Snow Bungee for possible future product endorsements.

After a few minutes of roaring expletives and laughter, it was time to get busy. 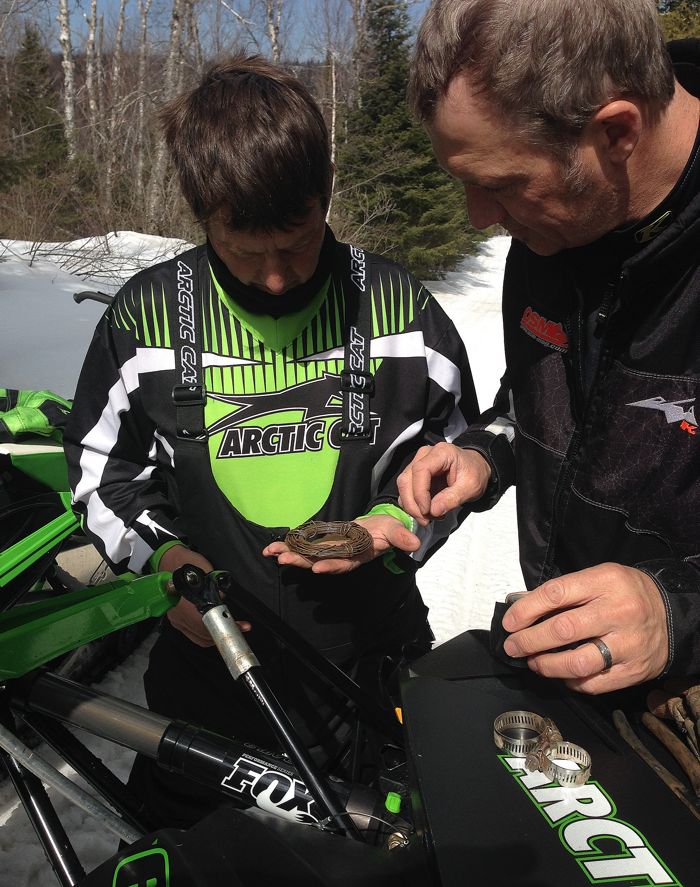 A quick inventory of our tool bags revealed no extra A-arms or welder.

However, we did have a couple hose clamps, bailing wire, some tools, zip-ties, duct tape and ArcticInsider decals. 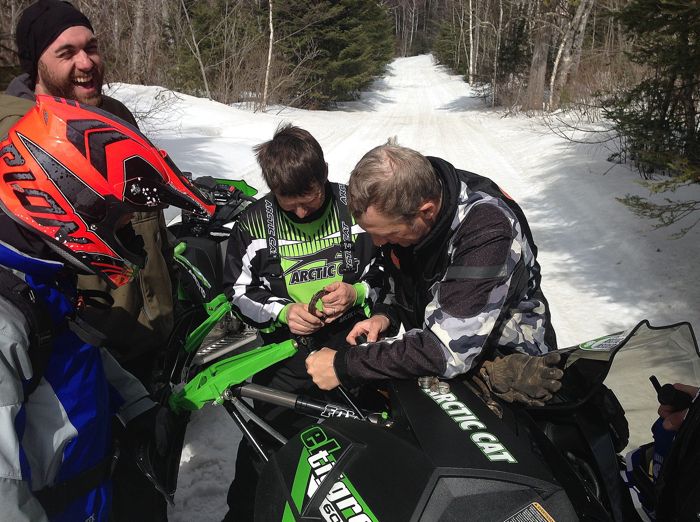 And we had the much-needed sarcasm and wit that spews from the mouths of everyone in this group. 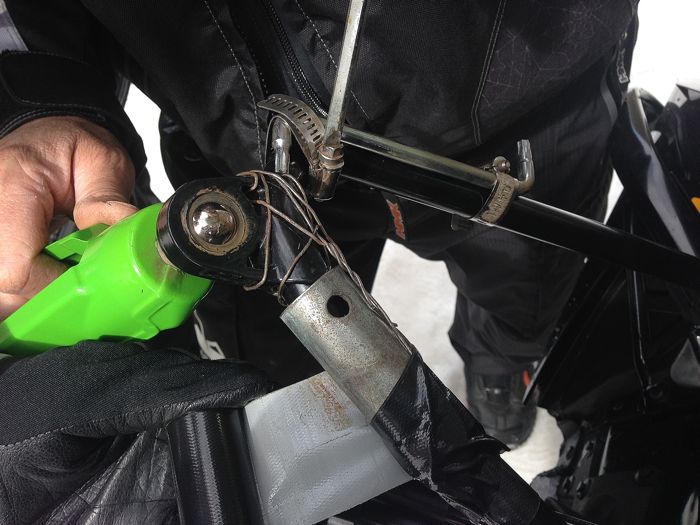 Now channeling our inner MacGuyvers, we used a sparkplug socket as a sleeve over the broken A-arm tube.

A couple hose clamps held the offset-Torx wrench as a de facto splint on the kinked portion of the arm.

Ample use of bailing wiring made zero contribution to the fix, however, it at least made me feel good about carrying it in my tool kit for 20 years without EVER having used it until now. 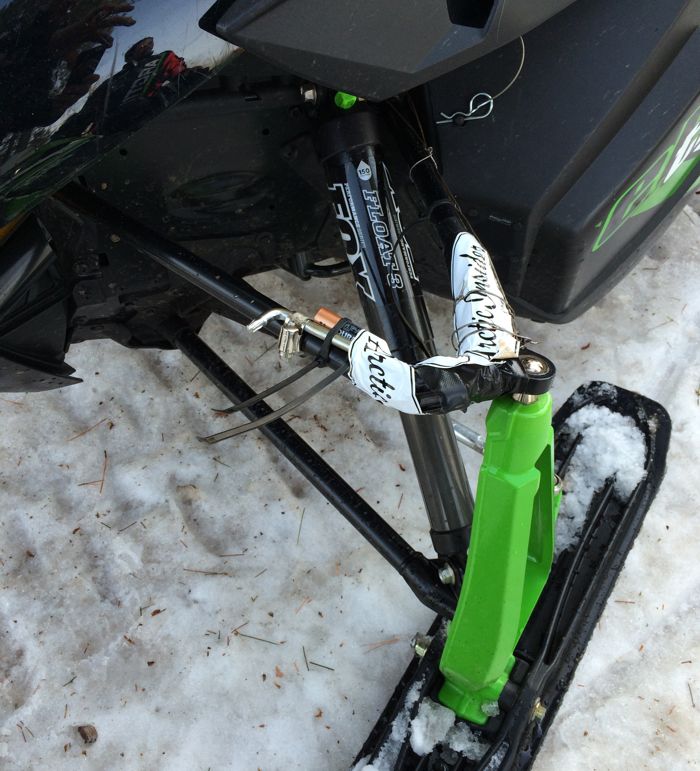 We added some duct tape and ArcticInsider decals for extra strength and then zip-tied an Energizer battery onto the wound for added power. 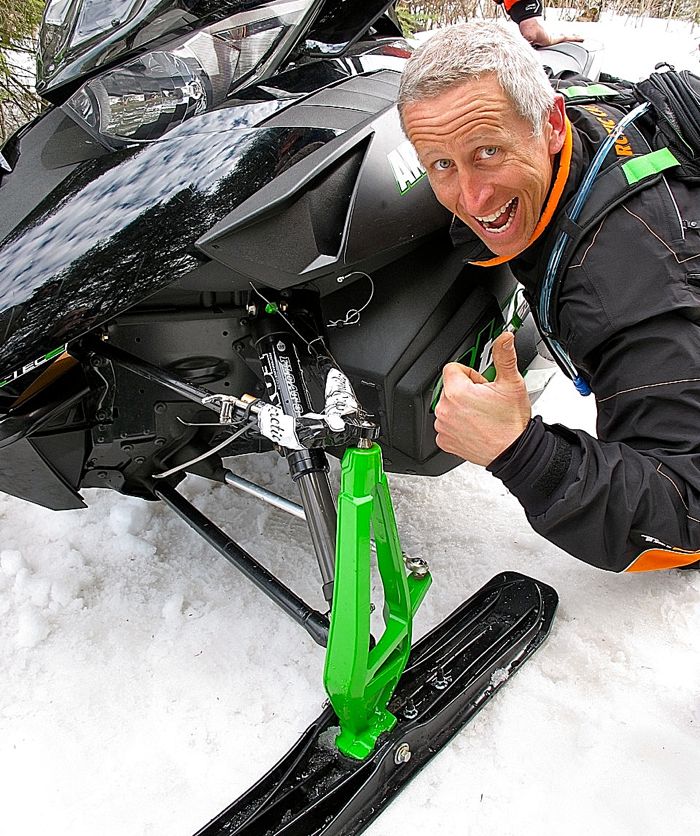 Confident that the hasty repair wouldn’t last more than two corners, I gave the situation a thumbs-up and then pleaded for someone to step forward to ride this contraption for the rest of the day.

And just like that, the banter stopped and the forest was eerily quiet. I even heard the howl of timberwolf from somewhere near Thunder Bay.

Mr. Snow Bungee himself soon interrupted the silence as he went to move his XF6000 to the other side of the trail… 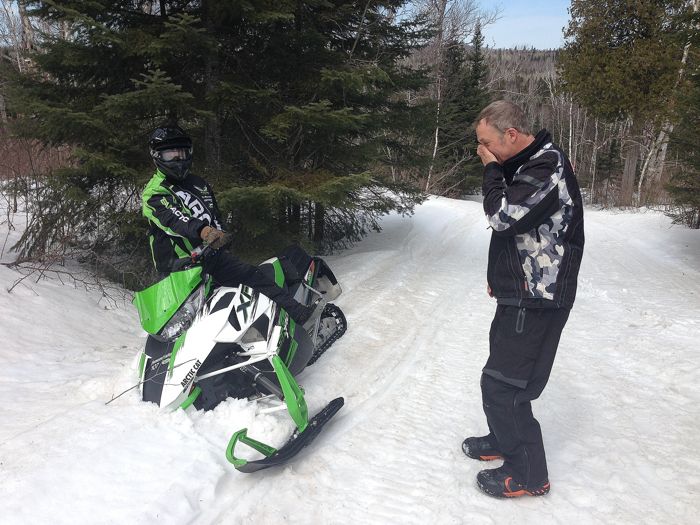 …and proceeded to bury it!

The timber wolf near Thunder Bay DEFINITELY heard Tom’s reaction, as well as the howling of laughter from the rest of our group!

This time we used good ol’ manpower to free the stuck sled and then continued onward towards our goal of the Trestle Inn, some 30 miles up the trail.

There was just a wee-bit of uncertainty regarding the structural integrity of our repair job. It didn’t help that everyone in the group took off like they were in contention to win the Jeep 500.

After inspecting the repair a few times in the first handful of miles, we deemed it “good enough.”

Peeling off the North Shore trail and onto the Tomahawk for the last push to the Trestle, our group was still amazed by the amount of snow and the great trail conditions. 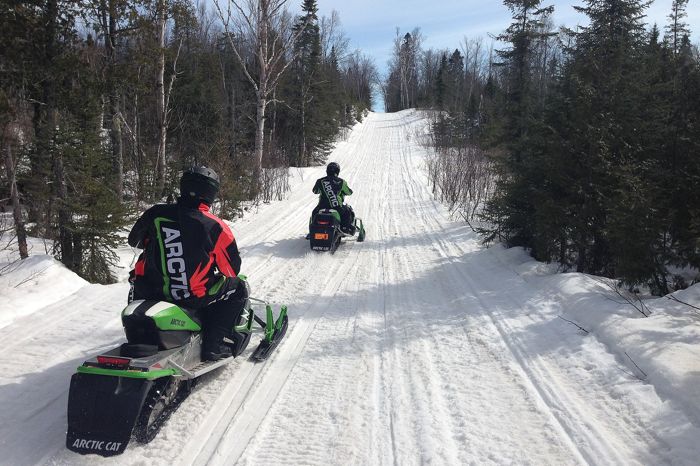 This is pretty much what it looked like all day, save for a few corners that were showing dirt. 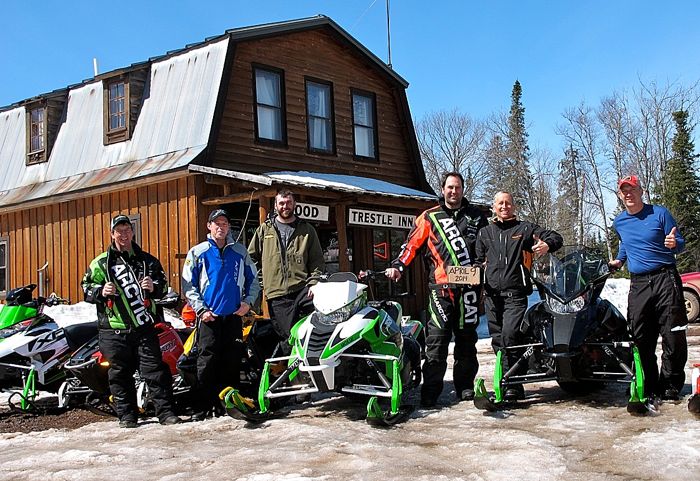 The obligatory group shot at the Trestle,

After a feast on fantastic hamburgers, we opted to play it safe with Tiger’s A-arm by taking the same route back to Two Harbors rather than the longer Tomahawk-to-Isabella-to-Yukon-and-back-to-the-North Shore loop option. 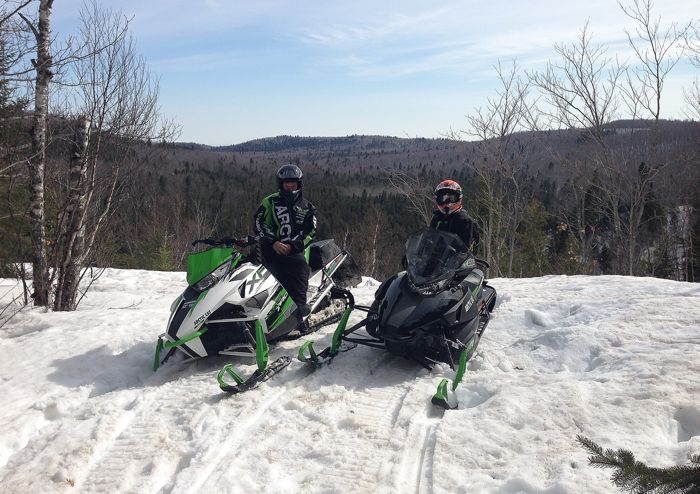 Cheesy posed photo on an overlook. I chose this special moment to propose to Tom…

…that he never again hook a Snow Bungee to the upper A-arm of a snowmobile.

At this point the revised front-end geometry had survived 60 miles of abuse without so much as a tweak or a twerk.

No sooner had I let out a sigh of relief then my sled started smoking as if it were on fire!

It’s great to have friends like mine. Not only do they launch MY sled off the trails, destroy the A-arms and light smoke bombs, they also laugh AT me.

Worse, not one of these yahoos has liked me on Facebook! 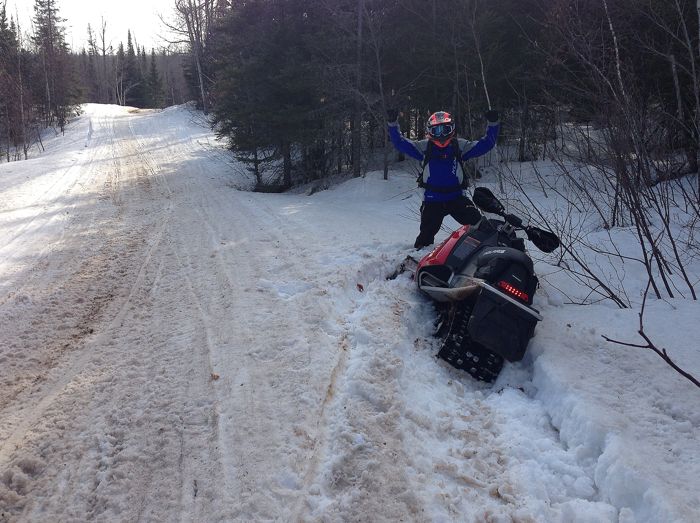 I suppose it was some consolation that, a few miles down the trail, Andy Swanson got all rodeo-like and buried his sled.

Rowland tried desperately to use the Snow Bungee to help him, but when we saw Tom attaching it to the brake cable of Andy’s sled, we forever banned Tom from using that contraption on these rides.

A few miles from the parking lot and the end of our ride, I snapped one last riding shot to capture the day and the memories provided during the 123 clicks on our odometers.

In all seriousness, the conditions on the trail were awesome, way better than anyone expected.

After loading up the sleds we spent a good half-hour soaking up the afternoon sunshine and witty banter this group is renowned for.

There’s STILL enough snow on the North Shore to ride this coming weekend. In fact, there’s talk of another “last ride” among our group.

Whether we go again or officially call the season “over,” we enjoyed a great day and an even greater winter.