Much progress has been made in Brian Nelson’s three-sled vintage I-500 project.

Nothing like snow-filled ditches to kick the effort into overdrive… All three 1979 el tigre Cross-Country Cats are built. 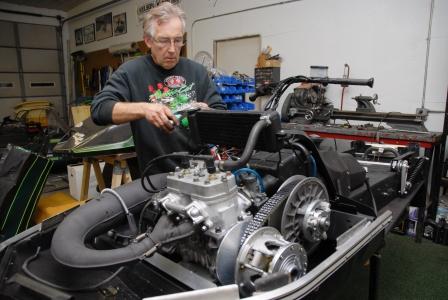 Here’s a shot of Brian with the #3 Arctic Cat CC el tigre.

Here’s a short video of Brian starting the #3 sled (the one I’ll race) for the first time. Second pull, baby! 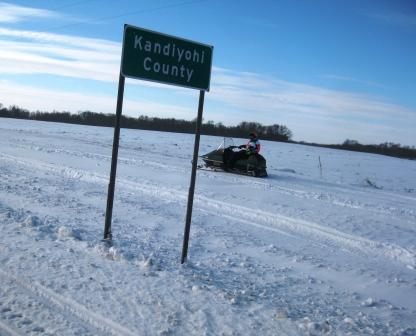 We’ve had a couple good rides already. The first was on Dec. 10. A 50-mile ride in the Spicer, Belgrade and Brooten areas.

As the first true shakedown ride, it started easy, with both of us swapping sleds and comparing notes about how they went through the bumps, engine rpm and general “feel.” 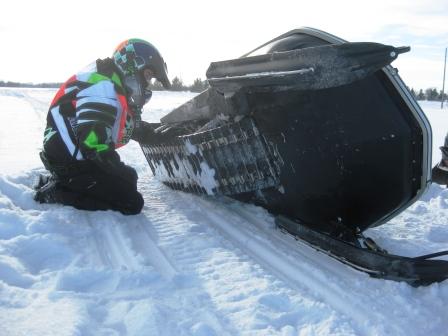 The #2 sled (which Joey Hallstrom will race in the I-500) had a loose coolant hose, and we lost some precious liquid. After letting the engine cool, we rode a mile or so down the ditch where we found a farmhouse, knocked on the door and were able to get some antifreeze from a nice old guy who wondered, “Why are you riding those old green John Deeres?”!

(I wondered if Jon Carlson had been there just before us, and had polluted this guy’s head with thoughts of vintage Deere.)

Anyway, one big reason for these shakedown rides is to discover such gremlins. 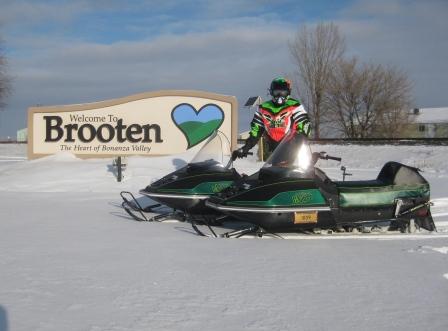 We pounded ditch up to Brooten, looking to pick a fight with all the Brut racers, but we didn’t find any. They were probably still in the dyno shop, looking to squeeze some extra horsepower out of their liquid three-cylinder engines. 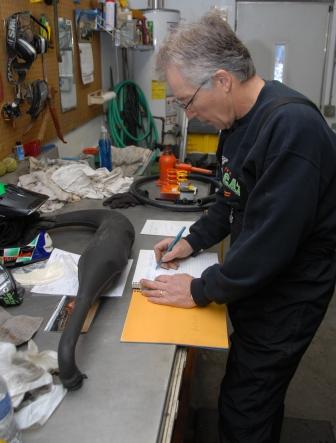 After the ride, we took notes about the day’s ride, what we learned, stuff that needs to be fixed and other observations. By the time the I-500 rolls around, this notebook will be half-full with such notes. 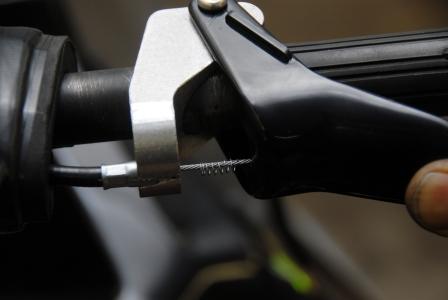 Tip #254 for building a cross-country race sled: Take a pen spring and place it between the throttle lever and the block, and put a glob of silicone to hold the cable end into the cradle of the lever. Then, should the throttle cables freeze, the end won’t pop out of the lever. 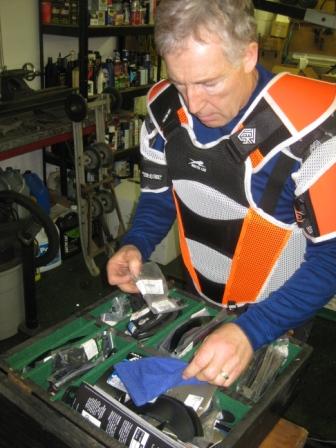 Brian gets his goggles ready prior to our second ride. He has a sweet, custom box that contains dozens of different lenses, Pro-Vue face tape and other goodies. 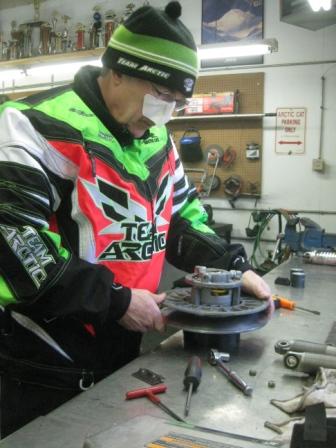 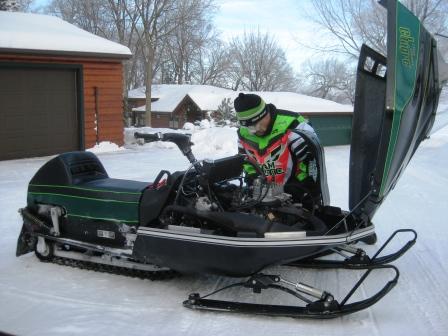 The #3 sled had NOS stock shocks on the skis and skidframe, and I’m here to tell you: for serious pounding, the FOX shocks are a huge improvement. We’ll put some on this sled before the next ride.

I’ve been waiting to ride 1979 Cross-Country Cat since I first saw one in-person at Haydays in about 1984. Helping Brian build one this fall, the anticipation dial has been turned to 11. And I’m happy to report that, in their “modernized” condition, they are far more capable than I ever expected.

First of all, they’re quick and fast. Really fast! Like 75 mph in mealy-ditch-snow fast.

Their 440cc liquid-cooled engines produced hp in the upper 60s which, in concert with modern clutches/tracks and an overall lightweight package, gives them straightline performance that rivals today’s 500cc sleds.

With uncalibrated Fox shocks, the suspensions are surprisingly comfortable in most conditions, especially the rear skid. The fronts work okay when hitting bumps squarely, but they pitch the front front when hitting off-camber stuff. In a perfect world, the ski-stance would be another 4 inches wider.

I sure enjoy their short length and easy-to-pitch-sideways handling. Makes for a lively, yet easy-to-control ride.

Yesterday, on two separate occasions, we overtook groups of decent riders who were pounding ditch near Glenwood, Minn., all of whom were riding sleds no older than 2005 AND were definitely going hard. Granted, they were “carrots” and we were intent to pass them, but still….

Clearly with modern components like the tracks, shocks, hydraulic brakes, clutches and such, these machines are far better than what Brian and his fellow Team Arctic racers competed on back in the day.

I can’t help but wonder what would happen if Arctic Cat made a modern version of one of these machines? Would it be a good entry-level machine, capable of satisfying many riders, as well as a machine that vintage-Cat fans would like? What if it was priced around $4-5,000?

For now, having pounded 100 miles, I know our bodies need more time in the saddle. My lower-back was pretty sore after the ride, and it needs to be ready for 170 race miles (that won’t have a hamburger break at the halfway point like yesterday’s ride).

We’re planning for another ride next weekend, hopefully with our fearless leader Joey, who will undoubtedly show us how REAL men are supposed to ride. 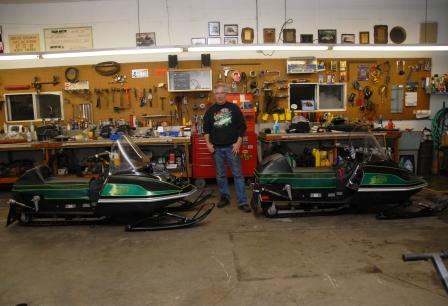 Thanks for reading this stuff. More updates in a week or so.