Meeting new people is one of my favorite aspects of attending events like Hay Days, races, dealer open houses, pig races and the like.

The conversations with like-minded people are always so easy and enjoyable, probably because we share similar interests and experiences.

Often times during these first conversations, the topic turns to the machines we ride and own. Invariably, Cat riders seem to own A LOT of machines… to the point that I’m frequently amazed and find myself wondering just how big their garages are.

Not coincidentally, so many Cat riders have decorated their shops and garages in all-things Arctic Cat!

Case in point: Darin Martens, a guy I met at Hay Days earlier this month.

Darin is a 48-year-old Arctic Cat nut who lives in St. Francois Xavier, a town just west of Winnipeg.

Darin’s been a Cat guy for 26 years. His wife Monique USED to be a Polaris rider until she fell into Darin’s orbit, and now she rides a 2013 F8000 Limited (modified with pink decals). Their summer wedding in 2007 involved snowmobiles. And she even has a “CATGIRL” vanity plate on her SUV. 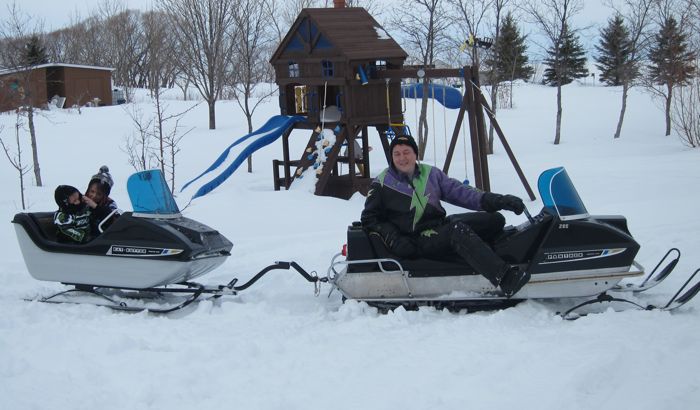 The Martens have two (Brendan and Alyssa) who currently rip around on 1972 and 1997 Kitty Cats, as well as in the Cat Cutter.

Darin primarily rides a 2014 ZR9000 Turbo Limited. The list of sleds he’s either owned or currently owns since buying his first machine (a used 1980 El Tigre) in 1989 is truly impressive:

In addition to a few of the above, the Martens also currently have these:

Those aforementioned 1972 and ‘97 Kitty Cats

In his own words: “I just love Arctic Cat so much maybe because they have a mystique about them and they come from a small town. I can talk about sleds all day long.”

I appreciate Darin’s passion for the sport and brand, and for sharing his story with me. Thanks, Darin!