1 Marching Forward: Two Days with Arctic Cat in TRF (and nearby))

Recently I was fortunate to spend a couple days at Arctic Cat in Thief River Falls (and the surrounding area), where I checked in on some of the people who make our snowmobiles, ATVs and side-by-sides.

There was the usual buzz of production, engineers testing snowmobiles, interesting creativity and Team Arctic snocrossers pounding out laps in nearby Fertile, MN. 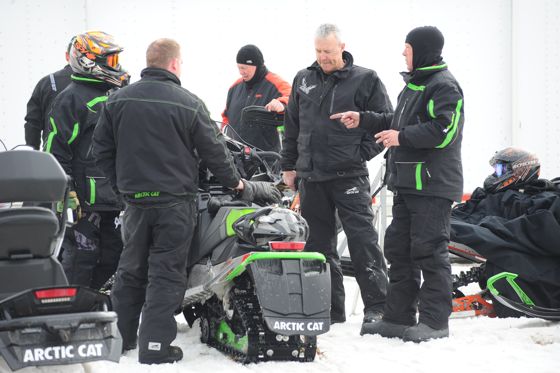 The first part of the trip was spent north of TRF, where Arctic Cat Engineering and Field Test were making use of the quickly fading snow and ice conditions. 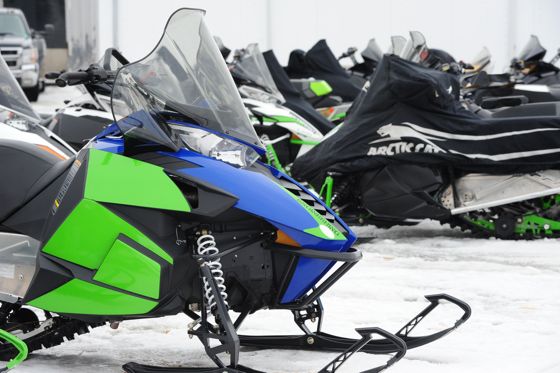 There was a mixture of pre-production 2017 models and other machines. 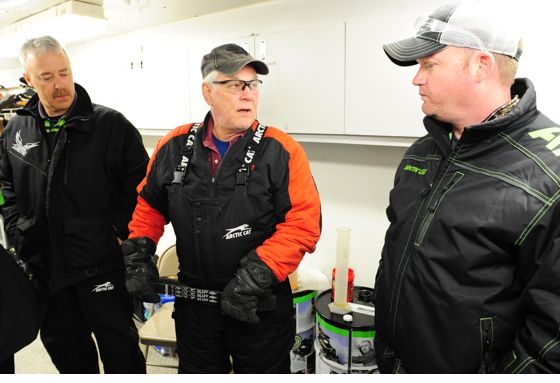 It’s cool listening to these guys discuss their craft, as they roll through a distinct language of clutch behavior and how it correlates to sled performance. They’ve memorized dozens of part numbers for each clutch weight, each driven cam and more, and they discuss such matters like you or I might dissect the nuances of a sports play. 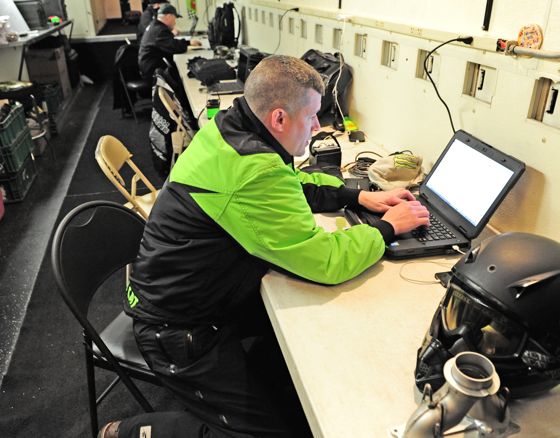 Ryan Hayes, Group Leader of 2-Stroke Engine Calibration, was busy programming and evaluating one of the sleds. I asked him if he’s ever “done” calibrating an engine, to which he laughed.

The truth is, there is no end to the amount of time and tweaking that can be done to an engine’s management system. Temperature, elevation, throttle position, RPM, humidity, snow consistency…every change to one of these factors affects engine performance, and the mapping/programming that guys like Ryan perform accounts for these changes. But it’s truly endless how much time and tweaking they can perform for a single engine. 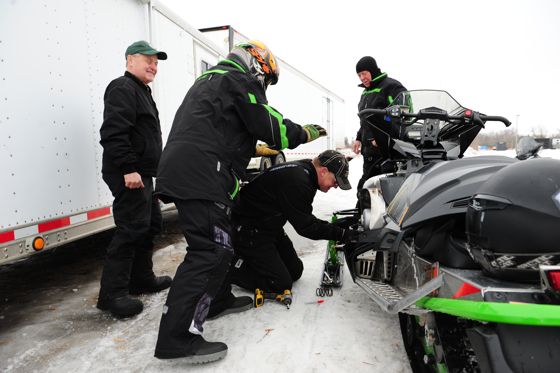 Here Roger Skime tries to hocus-pocus some extra magic on Brent Magner, who’s installing a new clutch calibration to test. Donn Eide (left) laughs at his friends while Greg Spaulding looks on. I think about how many hundreds of times these four guys have raced, discussed, changed, tested and retested snowmobiles over the years, and my mind swims. It’s cool that they truly enjoy themselves and the critical roles they play for Arctic Cat. 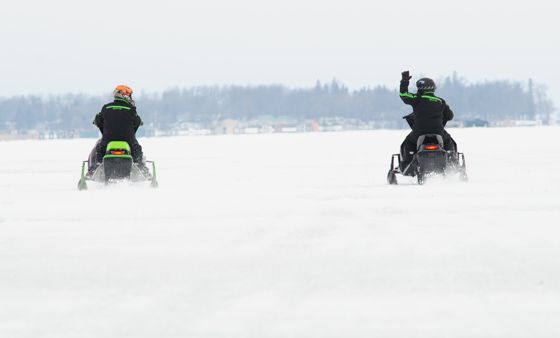 I had to laugh, in the wake of last week’s interesting discussion amongst many of us regarding whether it matters being the fastest… these guys spend the entire afternoon testing calibrations and comparing it to a baseline sled, all in an effort to produce the best overall clutching package, including being the FASTEST!

Yes, being the fastest matters to these guys! 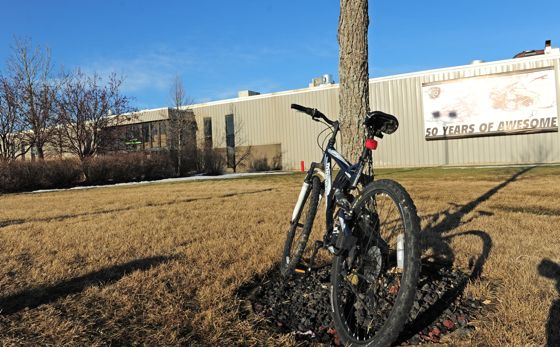 After leaving the test area and driving south to Thief River Falls, the scene was markedly different. There was no snow. Temps were in the 50s and bicycles were parked in front of the plant.

Winter had definitely transitioned into spring in the span of 85 miles, and the mood of the people I talked to reflected the changing seasons. 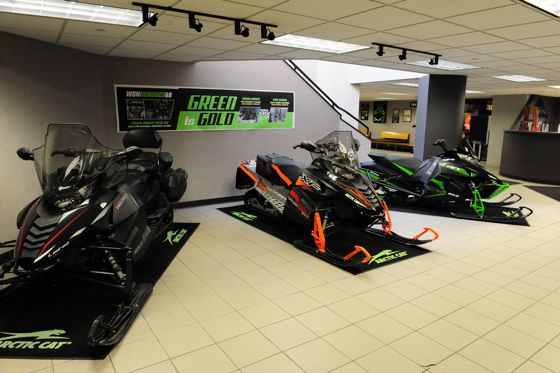 There were still 2016 model snowmobiles on display in the lobby. It won’t be long until new 2017 snowmobiles will grace this space, along with some wheeled machines. 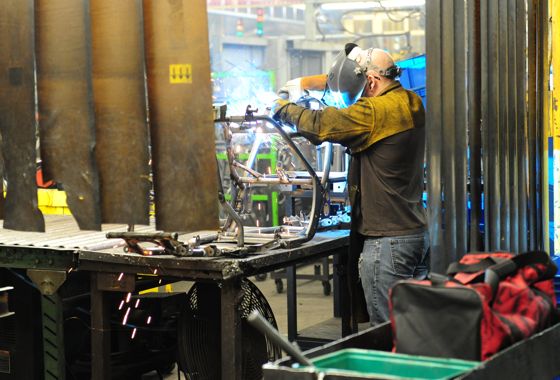 While I most enjoy talking with the great people at Cat, I confess that it’s almost as good to see the production of ATVs, ROVs and snowmobiles. On the way to see what machines were taking shape, I snapped a shot of this chassis being welded. While there are many robotic welders at Cat, there are also plenty of human welders too. I like that. 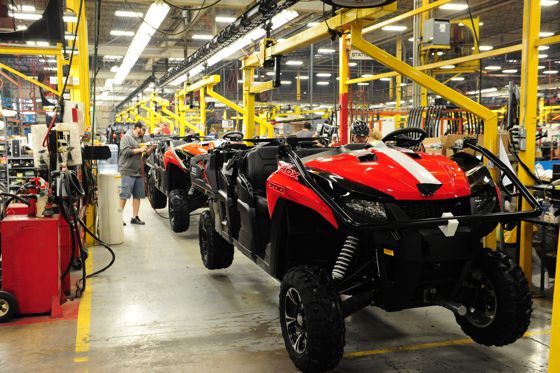 Brand spanking-new Arctic Cat HDX 700 XT Crew models looked absolutely stunning as they came off the assembly line. And big (which is to be expected for a 6-occupant machine). 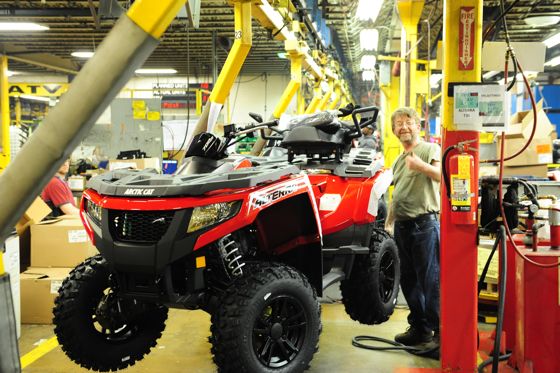 Another late release model, the Alterra 700 TRVs were worthy of a thumbs-up as they came off the line. 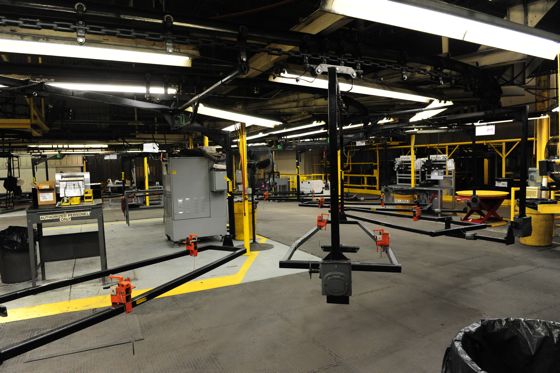 The snowmobile line was empty last week. It won’t be too many more days before this is moving with 2017 model machines. 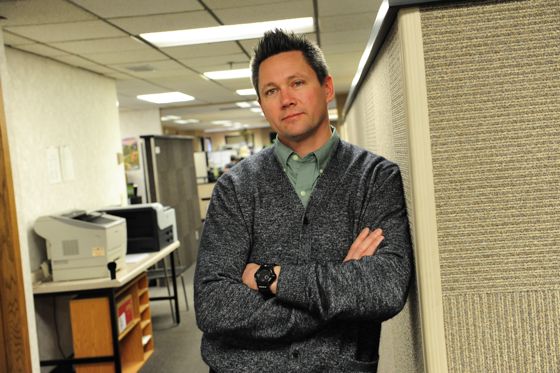 Speaking of 2017 models, I had a nice conversation with Troy Halvorson, Product Manager of snowmobiles, about the 2017 models and the recent Dealer Show. Troy has spent TONS of time dissecting the various categories of snowmobiles and has some really creative ideas.

We also chatted about the flood of comments on the New for 2017 story here on ArcticInsider. Troy reads this stuff and is keenly interested in what Arctic Cat riders have to say. He was puzzled by a few untrue statements in the comments section, but he otherwise appreciates getting constructive feedback. 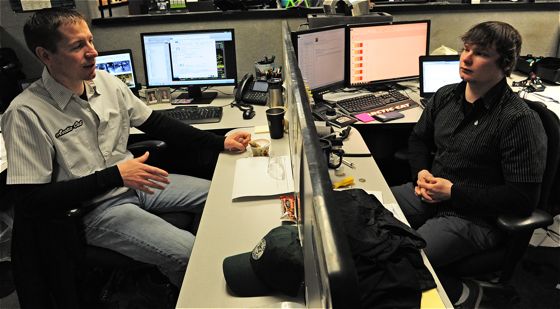 I stumbled into a conversation between Ira Johnson (left) and Jeff Brand, two guys who are fully immersed in the C-TEC4 engines. Each is a bright, dedicated engineer, hardcore snowmobiler and motorsport enthusiast.

They too echoed Ryan Hayes’s statement that there is no end to the amount of fine-tuning that can be done to a snowmobile engine management system. 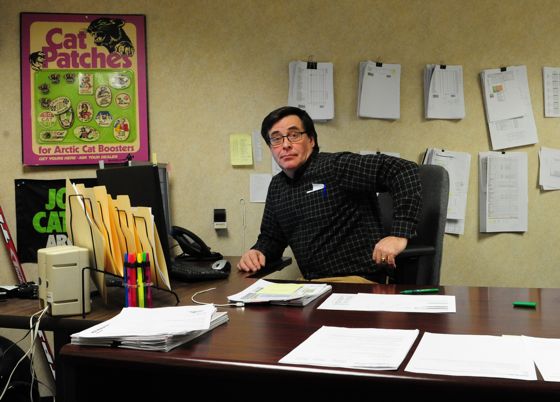 My last stop for the day was with Tim Benedict, who puts his considerable experience and expertise into building, nurturing and growing Arctic Cat’s Parts, Garments and Accessories business.

Tim was pumped about some new ATV/ROV accessories that will be announced soon, as well as the hefty new Arctic Cat Snow PG&A book that dropped at the time of the dealer show.

With my conversation with Tim done, it was time to head for home, but not without stopping at the Christian Bros. Racing snocross track an hour south of TRF. 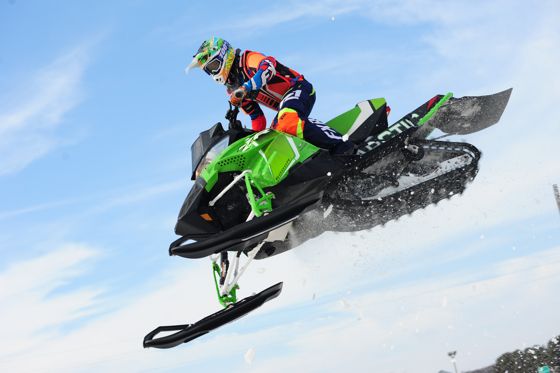 There were a handful of Team Arctic racers there testing and practicing on the track. Here Kaden Woodie drops out of the sky during a grueling moto. 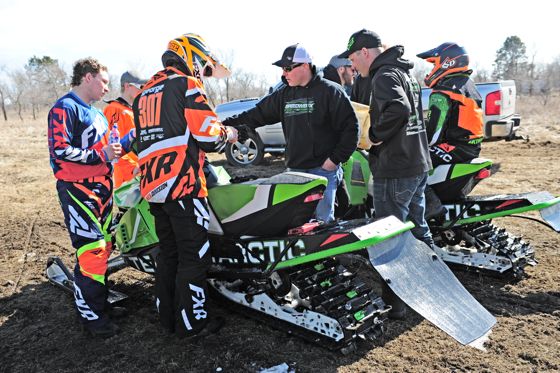 In addition to Woodie, Michael George, Jay Lura and Adam Mach were pounding laps during the hour that I was there. They were talking with Arctic Cat engineers Brian Dick, Wes Selby and Kelland Bjerke, gathering input on things that Arctic Cat can do to improve the race sleds in the coming years. 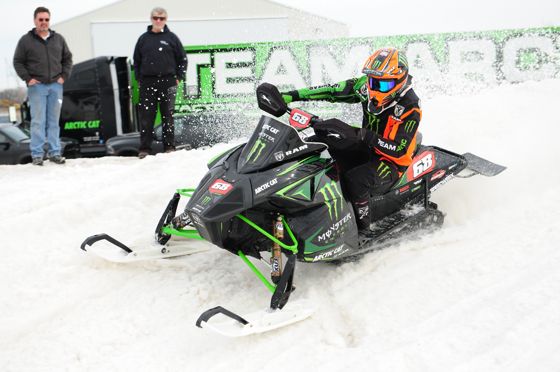 Tucker Hibbert was also testing this day in Fertile, under the watchful eye of Steve Houle (Speedwerx) and Tucker’s dad, Kirk. This crew is always trying new ideas in an effort to keep their competitive edge, and they were hard at work with a three-day stint at the CBR track (which is Tucker’s regular practice track). All three were looking forward to the upcoming ISOC national weekend in Lake Geneva, Wis.

Well that’s all for this trip. I’ll be back up to TRF soon, and I’ll report back with what I saw and learned.