What were you doing over the past week and a half? If you were a member of the Christian Brothers Racing team you might answer that question in a number of different ways including traveling to Sweden, racing the 49th running of the Eagle River Derby, competing in your first cross-country snowmobile race in over 10 years or throwing down the first-ever whip in Best Trick at the Winter X Games. Yeah, it’s been a busy week and a half for the CBR team, but that’s why they’re Pro. Here’s a recap.

After racing at Eagle River, Davis jetted off the Aspen to compete in Snowmobile Freestyle and Snowmobile Best Trick at the ESPN Winter X Games. On Thursday night he finished 6th in Freestyle with a best score of 81.33. On Sunday Davis narrowly missed winning a bronze medal, taking 4th in Best Trick with his signature (and best in the industry) whip trick. 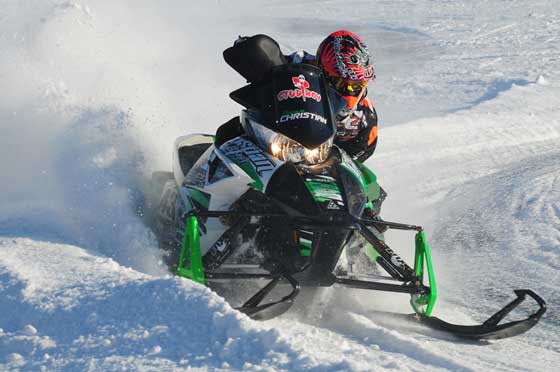 While Davis was living the high life in Aspen, Logan Christian was trying to keep from getting frostbite in Sweden where he was signed up to race the Swedish Stadiumcross Championships against some of Europe’s best snocross riders. The race took place in an outdoor sporting stadium in Osterlund, Sweden, January 19. Christian traveled there with team co-owner Dwight Christian and his mechanic Justin Halvorson. Riding a sled courtesy of Bengan Westerlund, Christian ended up in the LCQ where another rider t-boned him and took him out. Almost immediately after the race Christian hopped a plane so he could get back in time to do some cross-country lake racing. 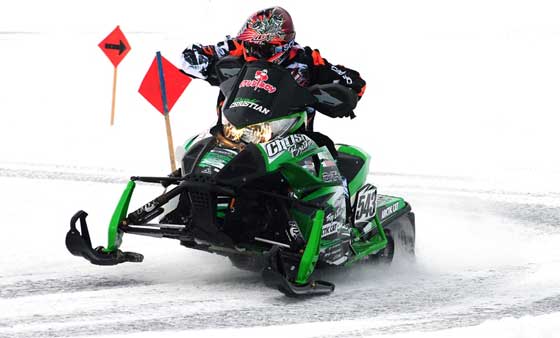 Fresh off the plane from Sweden this past weekend…who was suited up and ready to ride at the USCC J&K Marine Beach Bar 200 cross-country race in Detroit Lakes, Minn.? None other than team co-owner and veteran cross-country racer Dwight Christian. No doubt spurred on by the old-school lake racing the USCC had fell back on for its first event two weeks ago due to lack of snow, Christian swung a leg over one of the team’s Stud Boy cross-country Arctic Cats and rode Masters 40+ and Legends 50+. While both classes are “old man” classes, they are also highly competitive and Christian took a podium spot in the 50+ class, finishing 3rd.

D.J. Ekre won the Pro Open class and was backed up in that class by CBR teammate Brian Dick who finished in second place. Logan Christian finished 5th in the grueling two-day, 200-mile Pro 600 race (Christian’s first-ever lake race) with Garth Kaufman trailing him in 7th. Ekre, who was near the top of the time charts after the first day and won the Pro Open race early in the day, fell ill and couldn’t race Pro 600 on Day 2. 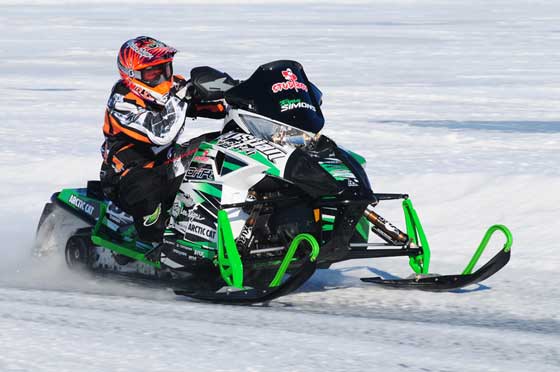 Ryan Simons, the 2011 USCC Pro 600 points champion, made up a bunch of time to finish second in Pro 600, his best finish of the season so far on the USCC circuit.

Next up the Christian Brothers Racing team will travel to Farmington, New York, to compete in the ISOC Vision Kia Eastern Nationals where Davis, Kaufman and Logan Christian will compete in snocross. Meanwhile, CBR riders Brian Dick, D.J. Ekre and Ryan Simons will be in Sault Ste Marie, Michigan, competing in the Soo I-500, a 500-mile enduro race run on a 1-mile ice oval. The Soo I-500 begins Saturday, February 4 at 10 A.M. Eastern time. For more info on Christian Brothers Racing visit www.christianbrosracing.com.