Both the sled and Janssen will be at Eagle River this weekend, making a few laps together around the famed oval. What a sight it will be!

Janssen’s dramatic victory at the 1969 World’s Championship was one for the record books, as the Crookston, Minn., racer suffered a wild crash in turn one of the first lap. Janssen feigned injury (above) long enough to force a restart, for which he successfully lobbied to participate in despite the so-called leg injury. Upon the restart, Janssen blitzed to victory. 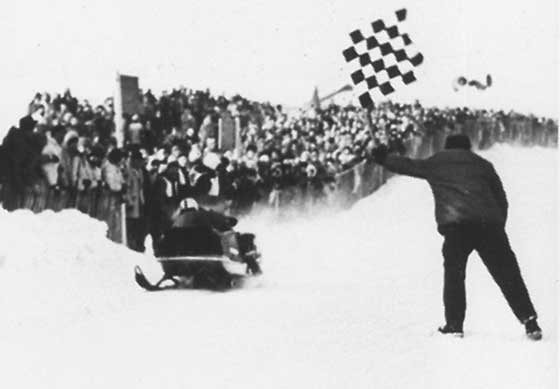 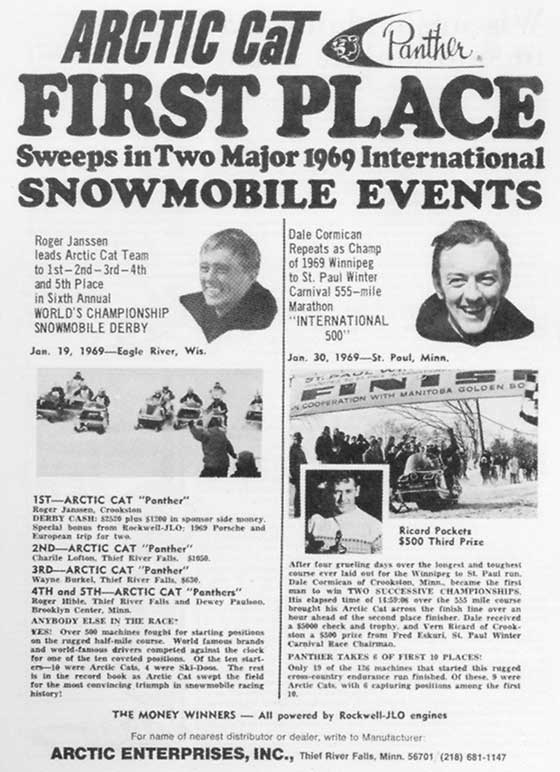 When news hit that the Eagle River Derby folks were hoping to have all the past Champions AND their sleds attend this year’s 50th, Arctic Cat collector Tom Ische was struck by the opportunity to honor both the event and Janssen.

How? By building a replica of Janssen’s ’69 Panther mod that Janssen could ride around the Derby track during the weekend’s ceremony.

The reason for a replica rather than the real-deal is that, according to Janssen, the original WC sled was literally in pieces the week after its historic win, no doubt because it was a bruised and battered sled and, back in those days, nobody thought for a minute about the virtue of preserving such artifacts.

So Ische started his replica build with the requisite 1969 P-45 Panther chassis and a 744 JLO twin that he was already in possession of.

Next, he contacted Janssen to set up a time to visit him. Just before Thanksgiving, Tom and his daughter Brianna met with Janssen and his wife, Barb.

The meeting took place at the Janssen’s home in Crookston, Minn., where Roger and Tom poured over a collection of personal photographs, books, bosscatlegacy.com and other memorabilia in order to determine what, exactly, was needed to replicate the ’69 mod.

According to Ische, this sled is as close as he can get to the original.

“There were variations of that motor back in the day,” says Ische. “Roger didn’t remember exactly what he used at Eagle, so we did our best.”

Janssen provided important details to the build as well as some actual pieces, including some of the stamped “claw” traction used on the track.

When I talked with Ische on Tuesday of this week, he’d just fired-up the big JLO and run the sled around the pond near his shop in Glencoe, Minn.

“The thing just screams,” exclaimed Ische, referring to the un-baffled mega-phone exhaust! “No wonder Roger has some hearing problems now. 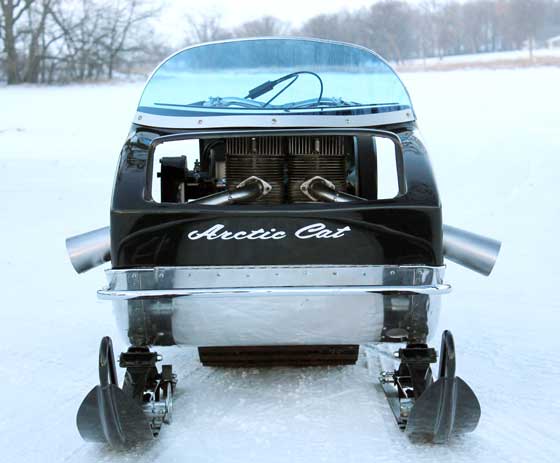 “I was surprised how powerful it was. Hit the gas on this sled and it picks up the front-end six inches!”

The Ische family will haul the ’69 replica to Eagle River this weekend for the whole world to see, and for Janssen to ride around the track (wearing his original suit and helmet!) during a special ceremony of past champions.

The time and money invested in this project was considerable, so I asked Tom why he tackled it.

“I did it for Roger and for Arctic Cat fans. People have to remember what a hero that Roger is and what a huge deal it was to win the Derby in 1969.”

Ische might also have another surprise to show fans this weekend at Eagle River. I can’t say anything more, other than I hope he found some extra time to make it happen. If it does happen, I’ll post photos.

For now I personally am looking forward to seeing this and all the other historic machines at Eagle River this weekend. Likewise I’m excited to see Janssen other race legends take to the track.

Roger Janssen and his wife Barb celebrate after the World’s Championship victory in 1969.

Barb and Roger photographed at their home in the fall of 2012, with evidence of Roger’s many, many racing successes in the background.

Thanks for reading, and a special thanks to Brianna Ische for taking such great photos of the Janssens and the replica sled.