There were 230-something entries in the 19 classes, competing on a 10-mile plowed lake course. That meant sucked-down sleds, lots of studs, sharpened runners and racers hanging off the sides of sleds to carve through the corners. 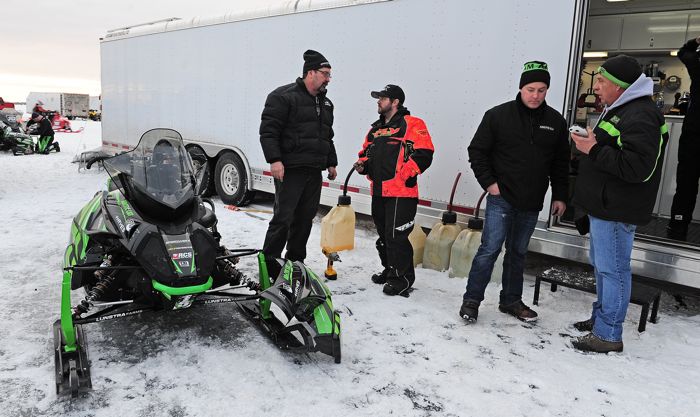 I was interested to see how the teams might have adjusted during the two weeks since the first lake race on Pine Lake on Dec. 20. At that event, there was some remarkable parity between the stock-sled-based Polaris and Arctic Cats, with flashes of brilliance for Yamaha. Ski-Doo didn’t seem in the hunt there.

Arriving at DL around 2pm on Friday, the pits were a flurry of activity as racers and crews were busy testing.

Above, several engineers in the Team Arctic camp were splitting time between massaging the stock sleds and prepping true Pro Open machines.

The Open sleds they were working on are aimed primarily at the Soo 500 enduro next month. Getting solid test time on the ice of Detroit Lake was crucial for shaking the bugs out of new ideas and components that will run at the Soo. 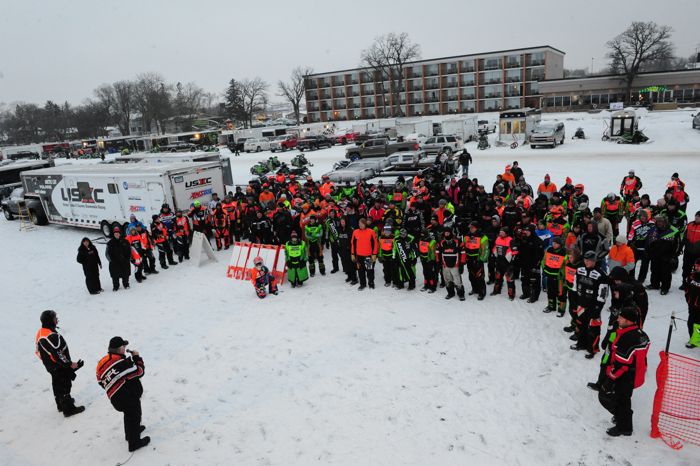 Saturday morning the drivers’ meeting started on time (like they always do at USXC events). The forecasted 1-3 inches of snow never came, but it was cold (with a strong and bitter north wind) and overcast, making for a lot of snow dust and challenging visibility. 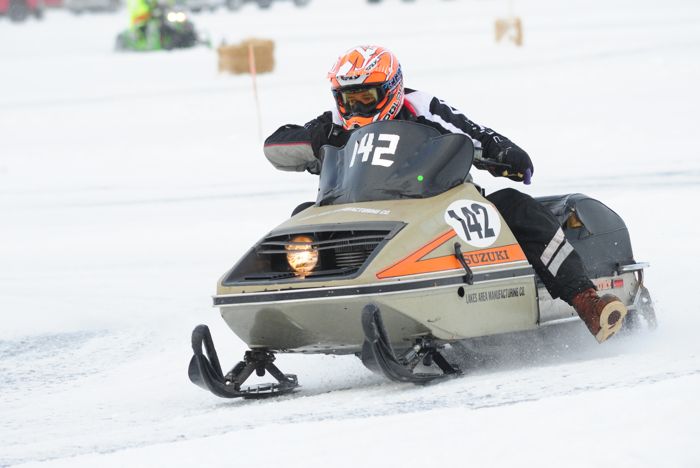 I wasn’t expecting the factory Suzuki team to be out in force at DL, so it was a nice surprise when they showed up ready to rumble. 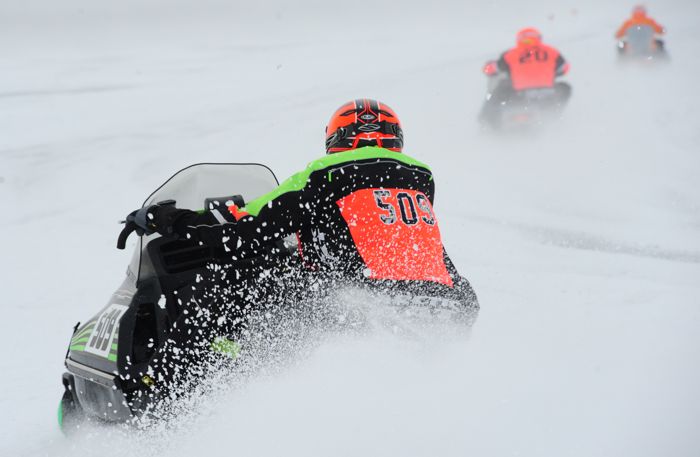 Unfortunately for Suzuki and all the other brands in the Vintage class, Jesse Watland was ripping up the course on his El Tigre, setting the fast time to claim the win. 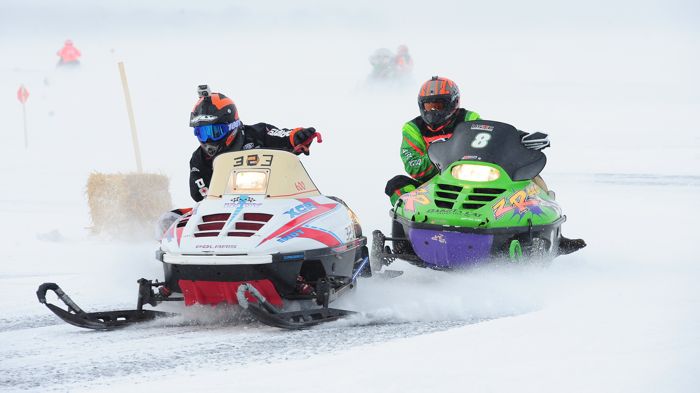 There was a moment when I though it was Nolan Knochenmus and Kirk Hibbert waging a classic battle, but it turned out to be Brandon Miller and Steve Martinson (right). Martinson would get around Miller and claim the win in Classic IFS.

Somewhere in the recesses of my brain, it was 1997 and the two former I-500 champs were in a dogfight. 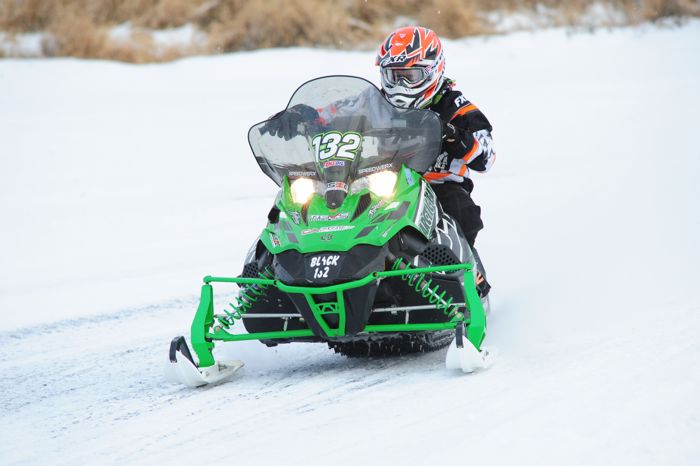 Keaton Black is one fast dude, and he proved it by winning the Jr. 10-13 class ahead of Cat teammates David Brown and Anson Scheele. 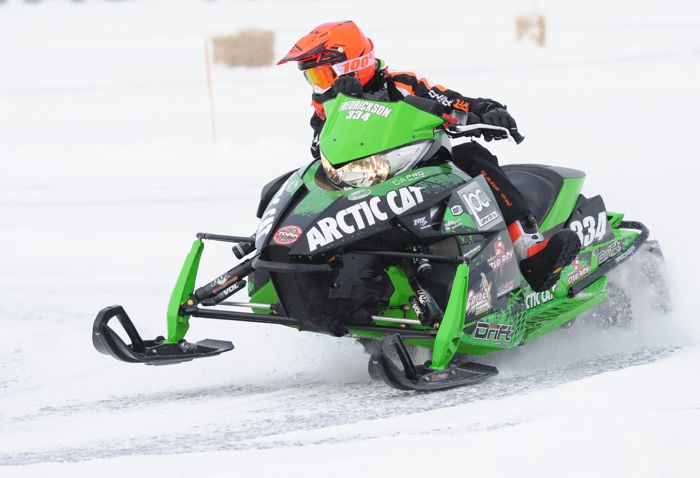 Dalton Fredrickson is another fast Team Arctic dude. He captured the win in Sport 85 aboard the new ZR 4000RR. 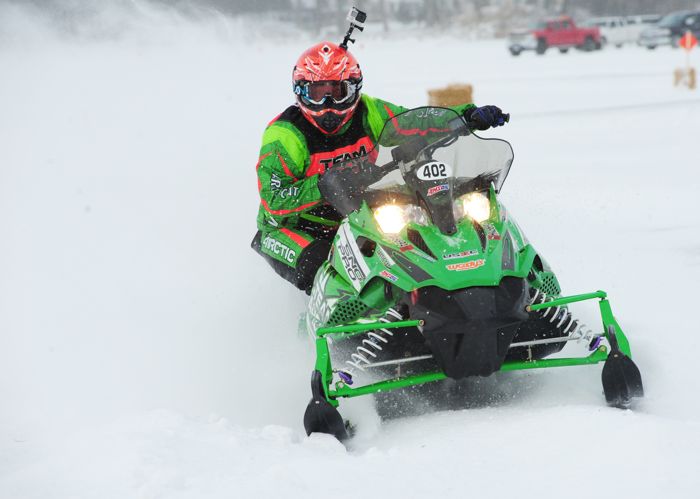 From my very informal mental note taking, I’m sticking with my opinion that the Sno Pro 500 and ZR 4000RR are very, very close in performance, at least on ice. It will be interesting to see if there’s any separation once the races move into the ditches beginning with the next event in Grafton, ND, on Jan. 17.

Ean Voigt won at Pine Lake, and he won again at Detroit Lake, taking the Trail class. And I have a feeling he’s going to win some more races this year… 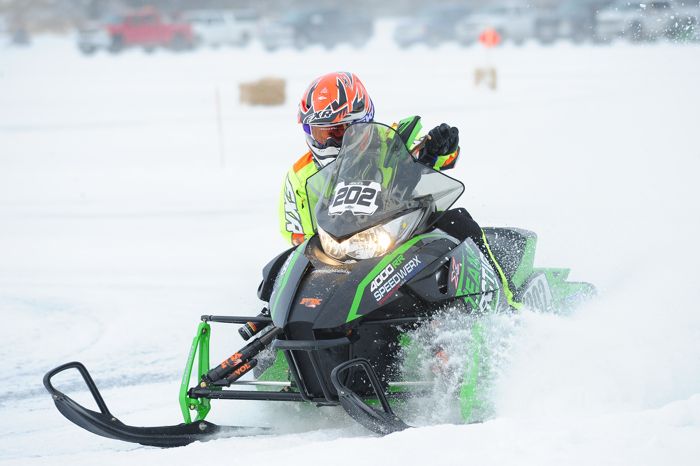 The winningest rider of the weekend was this hombre, Hunter Houle. Not only did he lead a fairly serious game ball tag amongst a cadre of young racers in the pool on Friday night, but hit the track Saturday and snatched wins in THREE classes! Nice job, Hunter. 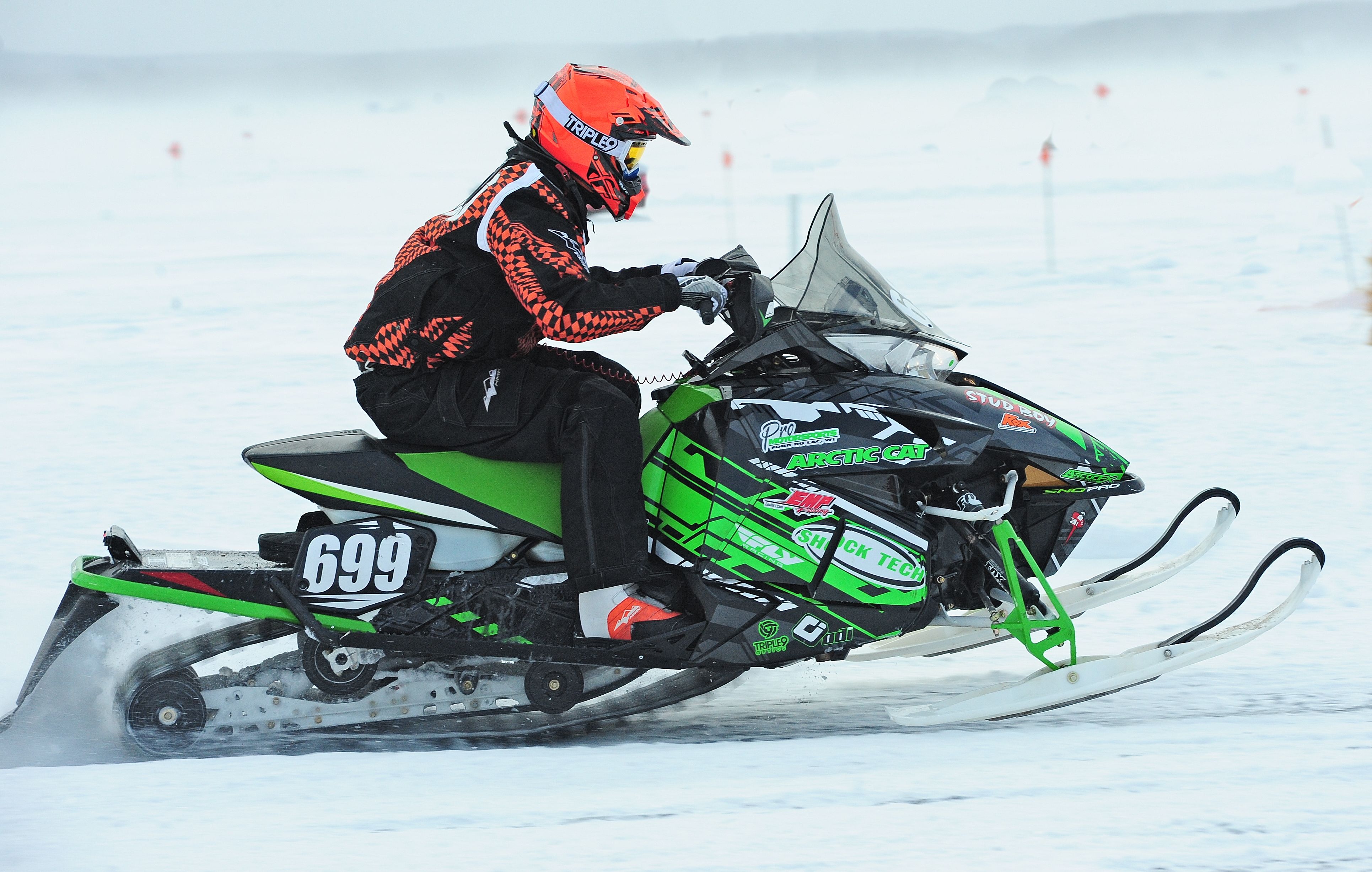 Ask any racer how their day went and you’re bound to hear about the trials and tribulations of getting sleds ready and making it to the races on time and prepared. The truth is, it takes a lot of work to go racing and sometimes crap happens.

I seriously doubt anyone at DL had a story to match Dylan Parsons of North Fon du Lac, Wis.

Parsons and his girlfriend (and snocross racer) Merranda Schmid left home on Thursday morning with plans to hit the ERX snocross race in Elk River, Minn., that night, then going to DL for the cross-country. On the way to ERX, a gust of wind and an icy bridge resulted in a totaled truck and race trailer. As in TOTALED!

The good news was that they were okay and his sled didn’t suffer too much damage. Rather than stay home and be bummed out, he made a few calls. Voila! Friend and fellow XC racer Craig Ritzinger offered Parsons some trailer space and a ride to DL.

Not only did Parsons get to race, but he won the Sport 600 final! Congratulations, Dylan, you deserved it.

(By far the coolest story I heard the whole weekend.) 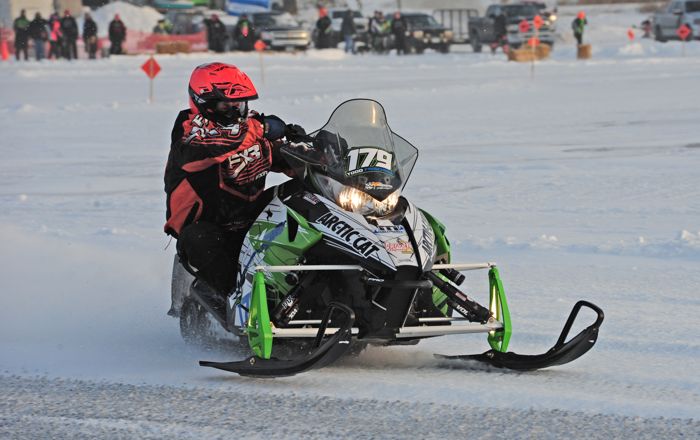 Todd Frischmon took the win in the 40-plus class… 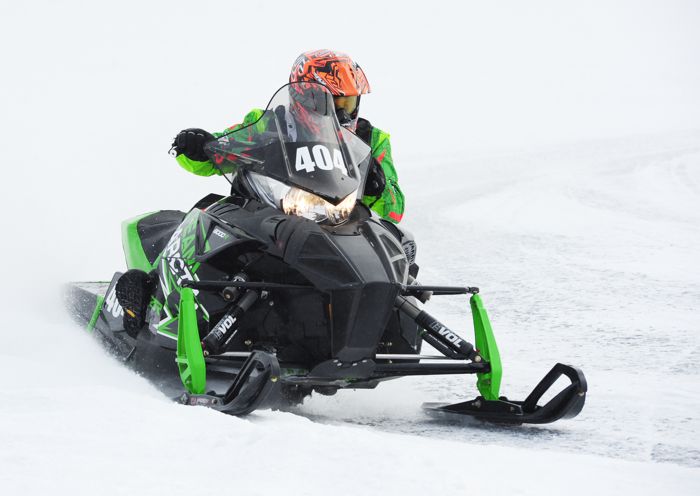 … while Erik Nymann took the 50-plus win.

I like that the well-seasoned racers can still bust a move in the various cross-country courses. 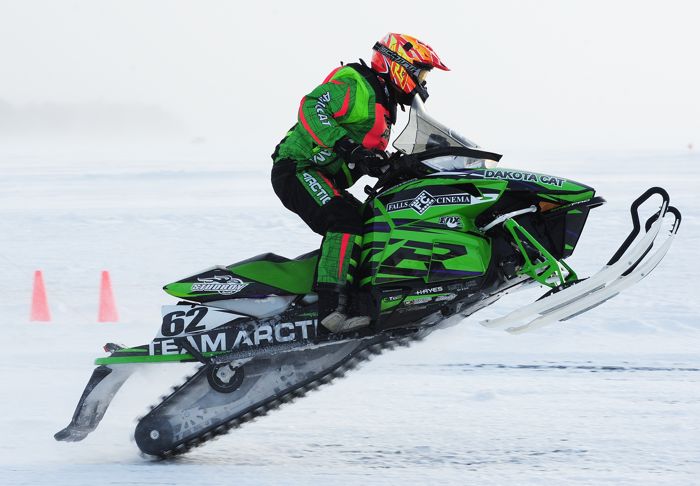 Lance Efteland gets two photos because he won both Semi Pro Stock and Semi Pro Open.

Even more impressive, within 15 minutes of having won the Stock final, Efteland was back on the ice and running well within the top-10 of the Pro Stock final. Unfortunately he lost his brakes at the halfway point and had to pull off (he’d switched pads between the two finals, but didn’t have time to change the warped disc). 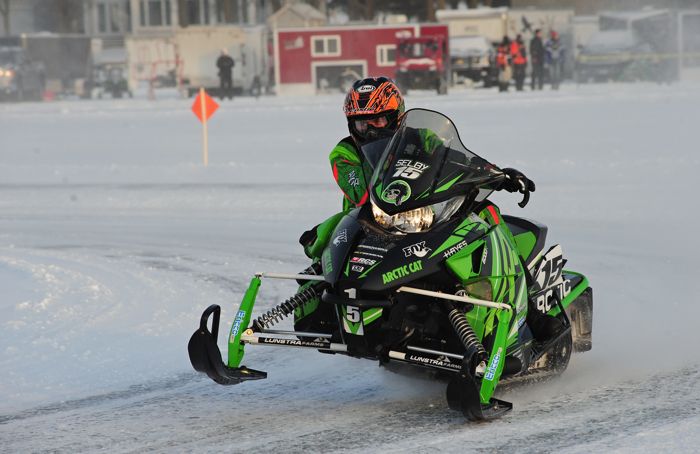 Wes Selby was absolutely on fire at DL. He set the fastest time in the Pro Stock qualifying race, then won the Pro Open final over teammate Zach Herfindahl.

On the first lap of the Pro Stock final he shot into third place after the first few corners. With Herfindahl in the lead and just one sled between them, it looked like Selby was going to move into second and have a nice duel.

Alas, a tangle with the other rider halfway through the first lap sent Selby into a cartwheel, his sled suffering too much damage to continue.

Selby is going to win a Stock class final. He’s getting so close he can taste it. 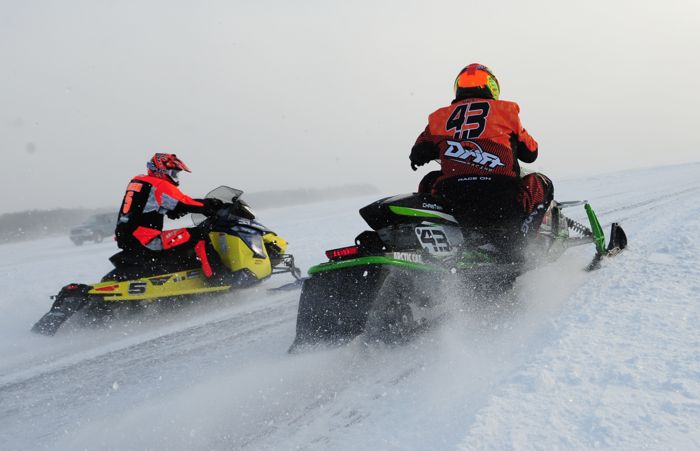 For the second time this year, Logan Christian hit a cross-country race and absolutely loved it. For a guy who’s used to launching 100-foot triples, Christian looked very much at home carving corners and staying low and smooth. He finished 11th (just 1 second off of 10th), and says he hopes to race the I-500 next month. 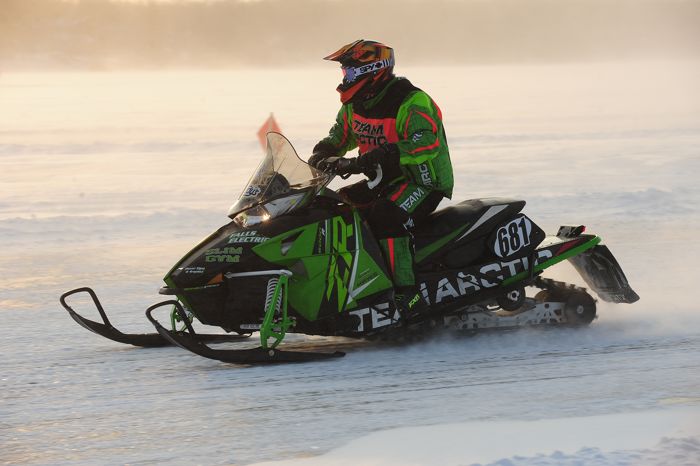 Finishing that one second faster than Christian was Chad Lian, a mainstay of top Pro XC racing for a whole bunch of years. 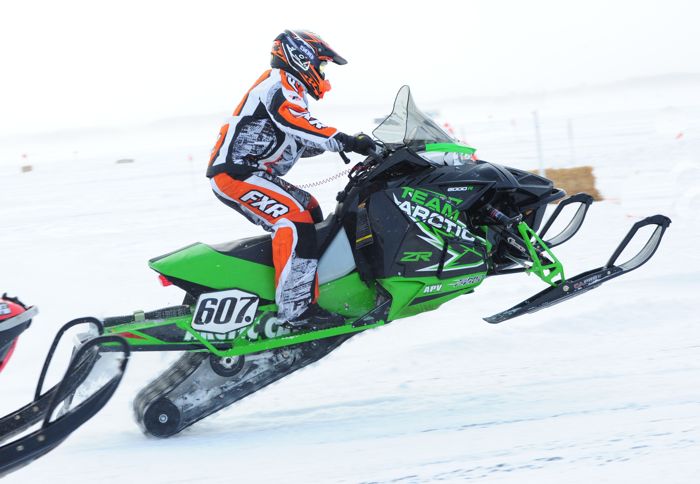 Jordan Torgerson finished ninth in the Pro Stock, looking his usual fast and smooth self. 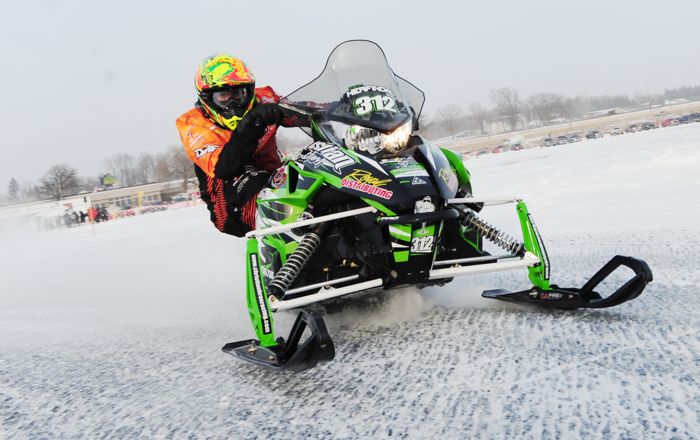 Zach Herfindahl was the big winner of the weekend. He grabbed the lead on the second corner of the first lap, dropped the hammer and was gone…checked out. 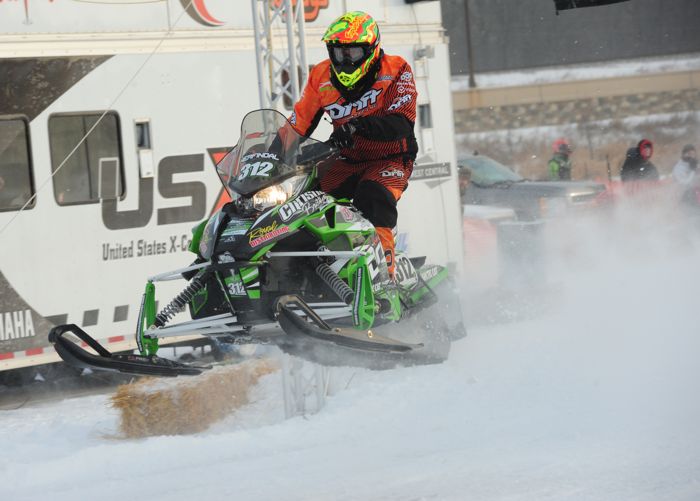 It would have been fun to see what battle might have materialized had Selby not tumbled.

One thing’s for certain, Herfindahl looked like a machine, clicking off 10 consistent laps while making it look easy.

He was NOT happy about finishing fourth at the season opener on Pine Lake, and you could tell he was looking to make a statement at DL. 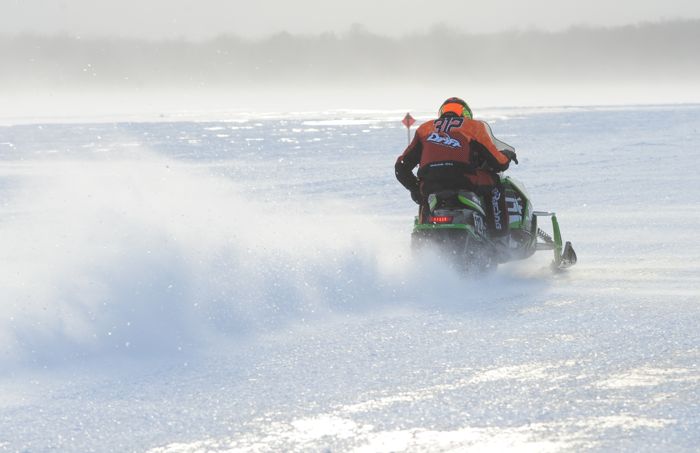 Truthfully, Herfindahl was so dominant that the race was actually anti-climactic, winning by 20 seconds over a trio of Polaris sleds led by Gabe Bunke.

Re Wadena finished 5th on a Yamaha, which was very cool.

If you read the Team Arctic press release that I posted yesterday, you know that Cat took wins in 16 of 19 classes, as well as 30 of 57 podium places.

That’s pretty darn dominant no matter how you look at it.

That said, it’s a fact that the racing is VERY, VERY close between the brands, including Ski-Doo (who were back on track at DL). For instance, the top-3 in Semi Pro Stock were Cat, Ski-Doo and Polaris.

The top-3 in the I-500 class were Yamaha/Polaris/Cat. And it was Cat/Polaris/Yamaha in Sport 600 Stock.

Weather permitting; the next USXC race will take place in ditches and rivers around Grafton, ND. It will be interesting to see if and/or how that shakes up the results.

Congrats to all the racers who competed at Detroit Lakes.