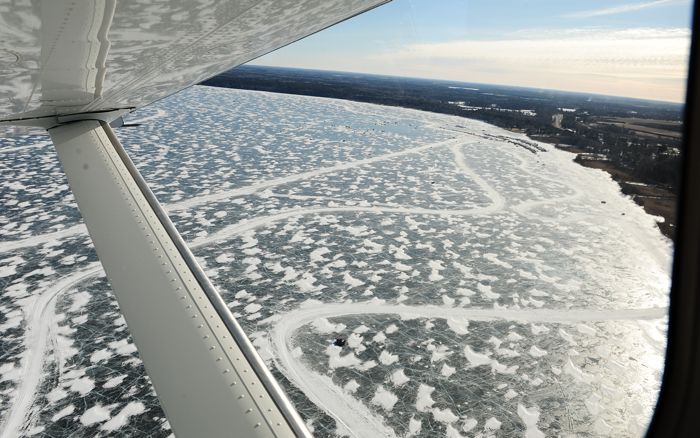 The 2015 Park Rapids, Minn., cross-country marked the fourth race in the USXC season. Orginally intended as a trail, ditch and lake course until Mother Nature failed yet again this winter, the race was rebooted as a 10-mile loop on Fish Hook Lake.

With more than 200 entries, temps in the single digits and blue skies, the event was an outstanding success.

The more racers I talk with, the more I’m hearing that lake racing is pretty dang fun. Some racers even like the lakes better than ditch events.

Either way, it’s a great element of cross-country’s many forms. And during a winter like this, it’s WAY better than staying home. 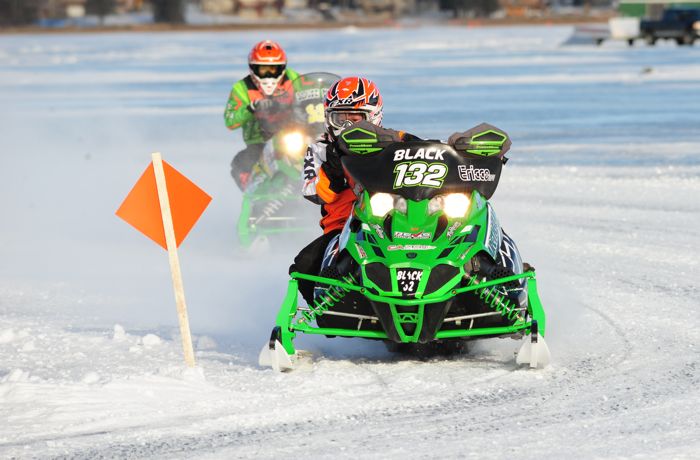 In the Junior 10-13 class, Keaton Black proved fast, smooth and worthy of the win on his Sno Pro 500. 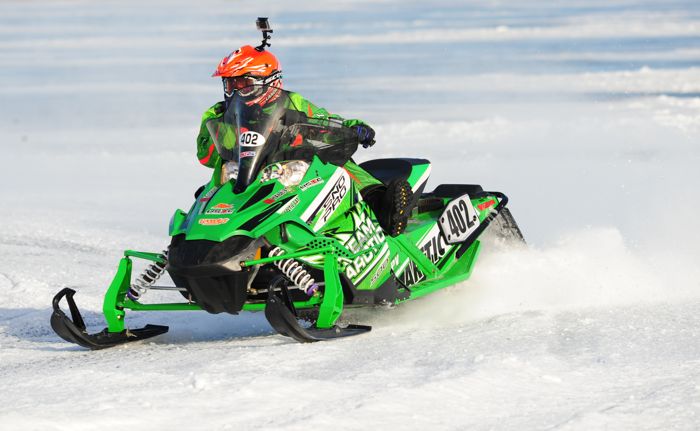 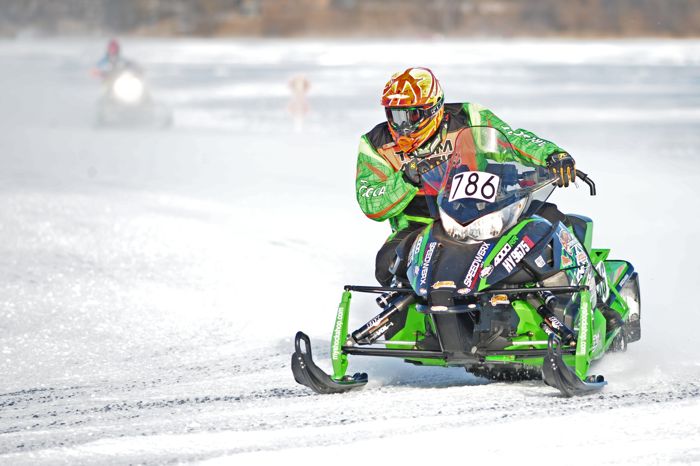 One of the Brown family of Team Arctic racers, Tyler (above) scored a win in Sport 85 at Park Rapids, while his brother David grabbed second in Jr. 10-13. 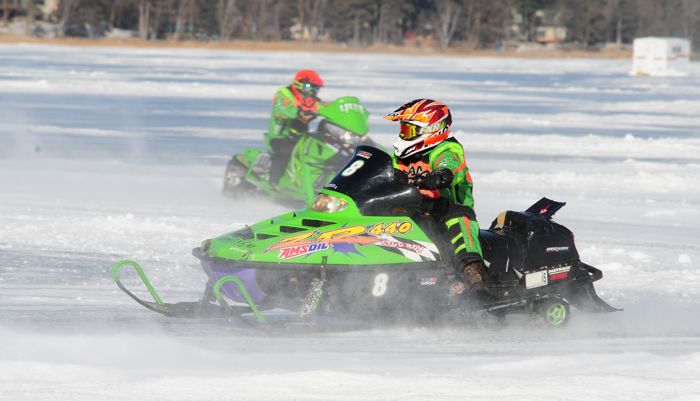 There are still one or two original ZRs ripping around cross-country. The fastest one belongs to Steve Martinson, who won the Classic IFS again this past weekend. I think his seat flap works as an air foil, keeping the front of the sled planted around the corners. 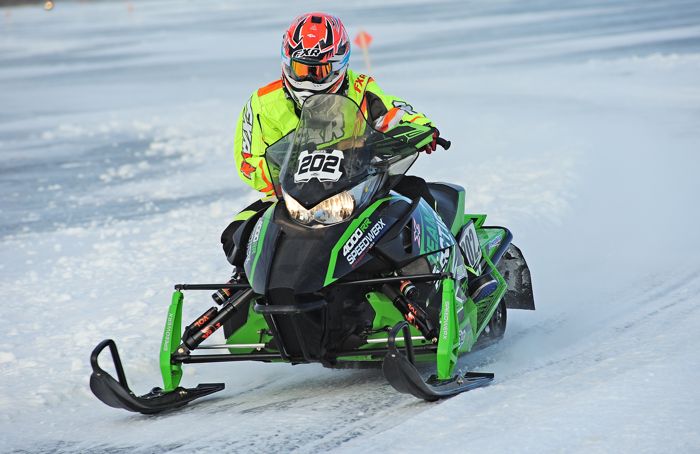 Hunter Houle continued his streak of winning multiple classes, taking Jr. 14-17 and Expert 85 Improved. Rumor has it that Hunter is going to captain the ArcticInsider Factory Team next season, including procuring the 53-foot semi, special sponsor-approved sled wraps, umbrella girls and all the other fixings.

At the rate he’s winning, I’m not sure if even the cash-flush ArcticInsider Factory crew will be able to afford him. 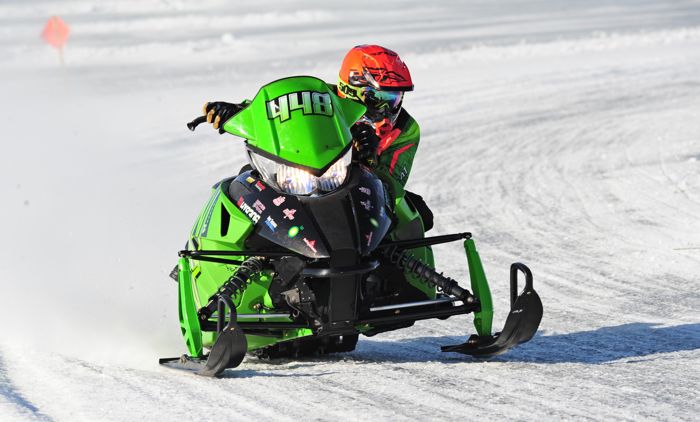 Another multiple class winner: Ean Voigt continues to impress for both his speed and his stamina. He finished first in Expert 85 and Trail, and took second in Expert 85 Improved and Jr. 14-17. 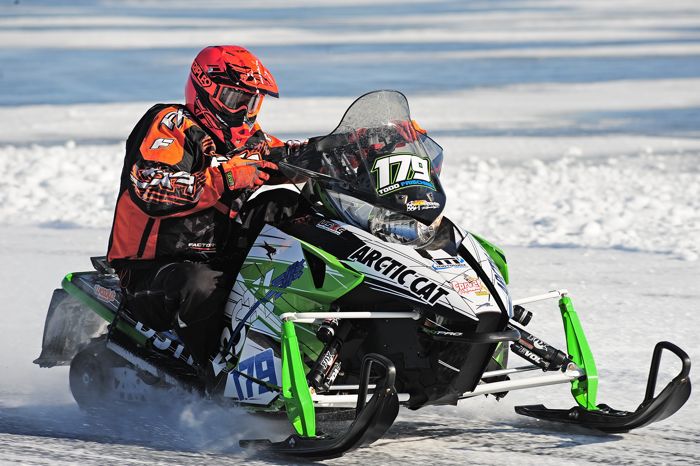 Todd Frischmon gets faster every week. At Park Rapids he scored a win in Masters 40 Plus, took second in I-500 Class and fourth in Semi Pro Stock. 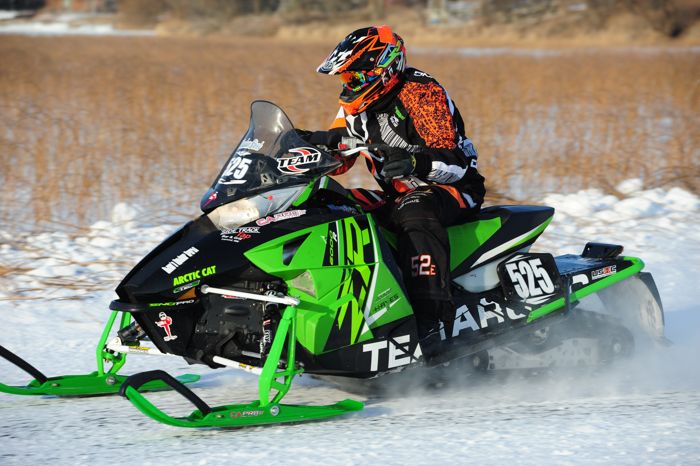 Another guy making big tracks is Dylan Stevens, who captured the win in I-500 Class and came VERY close to winning the Semi Pro Stock class. 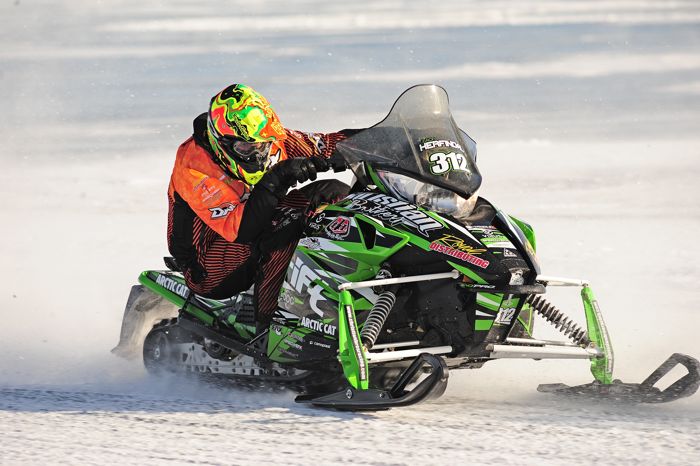 Zach Herfindahl kept his winning streak in tact by taking the Pro Open class. When it comes to speed and consistency, Herfindahl is a machine. He (almost) never falters, and he’s always winning or in contention to do so. 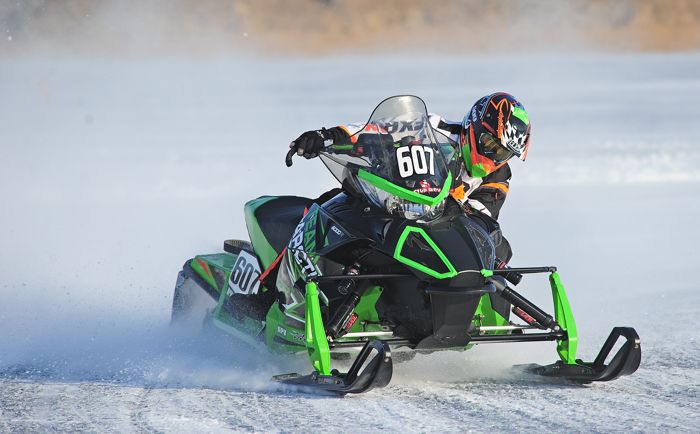 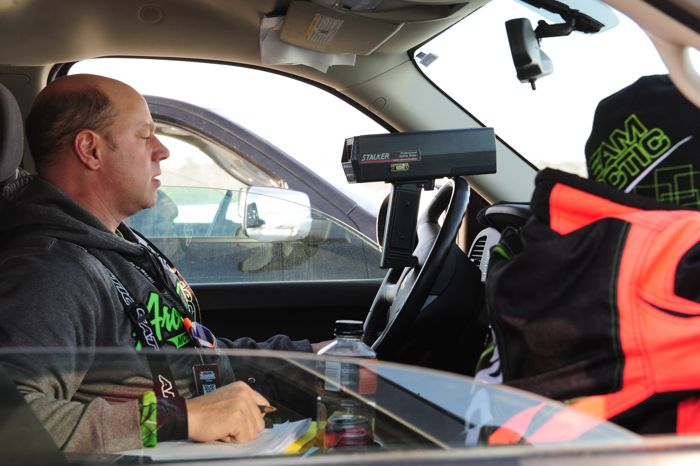 I mentioned faster-than-100 mph speeds at Park Rapids…which I know to be the case because Team Arctic Race Manager Mike Kloety was there with the radar gun, recording speeds in all the classes.

All the sleds were fast at Park Rapids, but Arctic Cat found a few extra mph, with the fastest 600s running 106 mph on the long straights. By comparison, the Yamahas were 105, the Polaris’s 103 and the Ski-Doos 101. 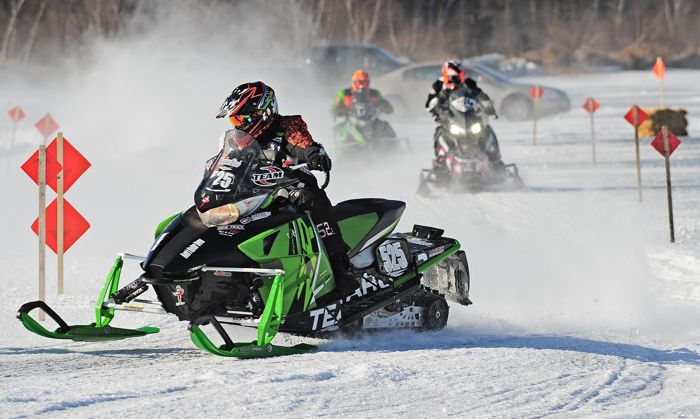 While all other classes were run as a time-trial format, the Semi Pro Stock and Pro Stock finals were heads-up events, with flights of racers starting just a few seconds apart and the finishing order determined by place, not time.

Dylan Stevens (above) led the Semi Pro Stock final from early into the first of five laps, with Polaris’s Alex Hetteen close in second and Arctic Cat’s Lance Efteland in third.

Stevens was on the gas and looked poised to add another stock class win this season (he won the opener at Pine Lake) as he head out for the final lap, but a Team Arctic teammate had other ideas. 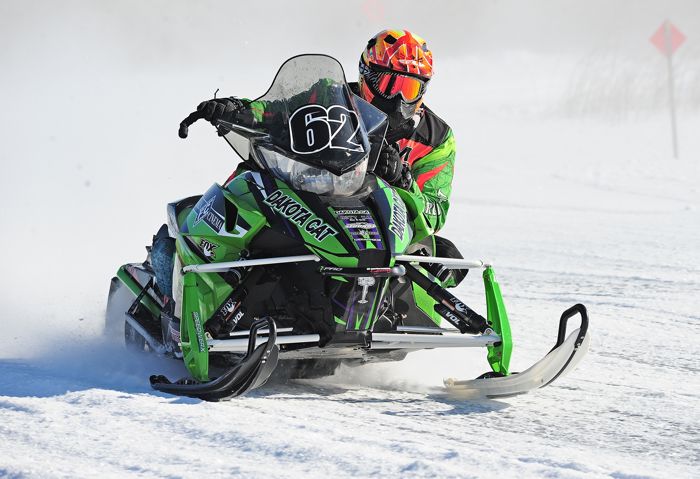 That teammate was Lance Eftelandm — riding a borrowed sled — who patiently bid his time in third until halfway through the final lap. Efteland first got by Hetteen, then a few moments later overtook Stevens.

The moves came only a couple miles from the finish, giving Lance his second Stock win of the season. 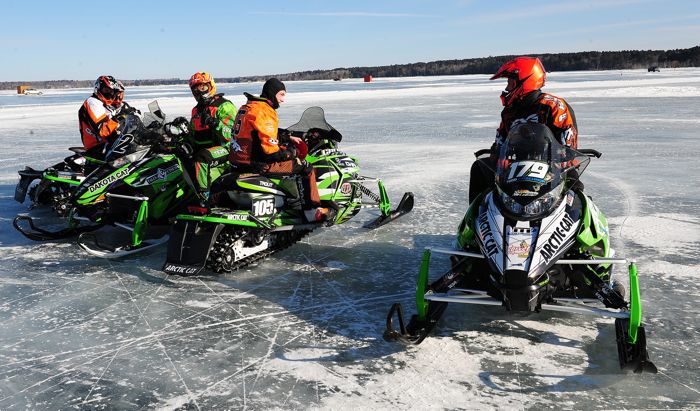 After the finish of the Semi Pro final many of the top racers stopped and shared stories of what happened while congratulating each other. L-to-R: Dylan Stevens (2nd), Lance Efteland (1st), Ryan Trout (5th) and Todd Frischmon (4th). Hiding behind Stevens was Hetteen, who finished third.

Finishing four of the top-5 in the class is a pretty dang great performance by Team Arctic! 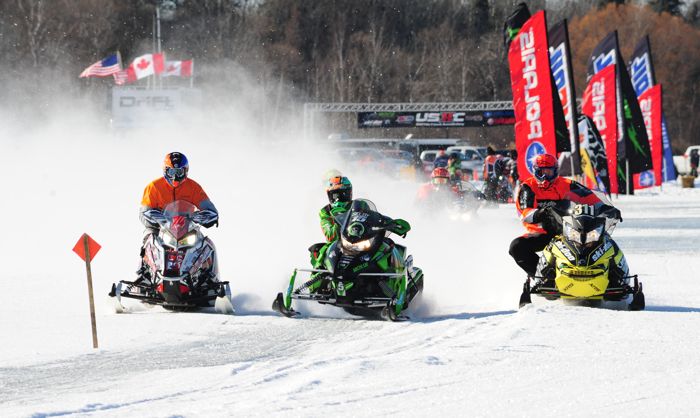 The start of the 10-lap Pro Stock final proved thrilling and safe, with Wes Selby taking the lead ahead of Ross Erdman (right) and Gabe Bunke. 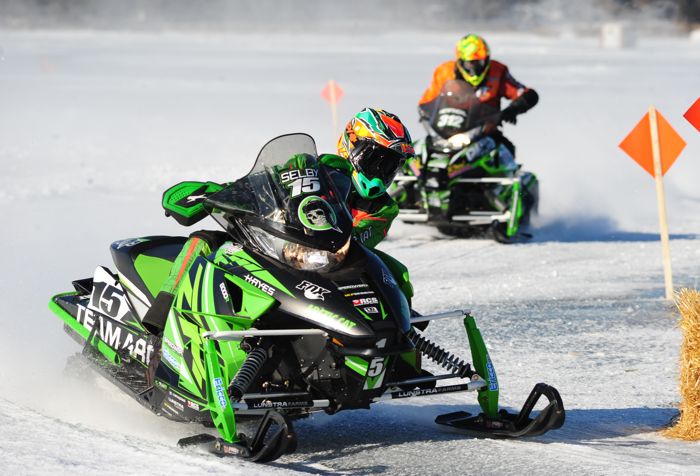 For the next four laps it was a dogfight between Selby, teammate Zach Herfindahl and Yamaha’s Re Wadena. The three stayed within a couple seconds of each other, with Wadena leading at times but with Selby primarily at the front. 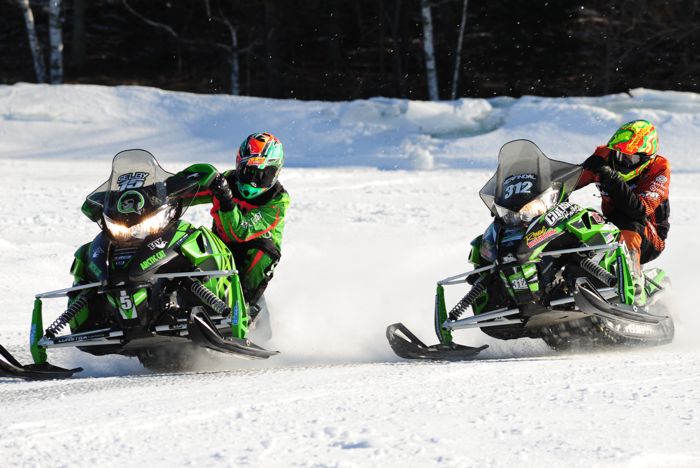 By lap five, Selby and Herfindahl had distanced themselves from Wadena by around around 6 seconds, which is crazy-close compared to most cross-country races but somehow seemed like an eternity after the three had been within spitting distance for the first few laps.

What was definitely crazy-close was the space between Selby and Herfindahl, as they were within feet of one another! 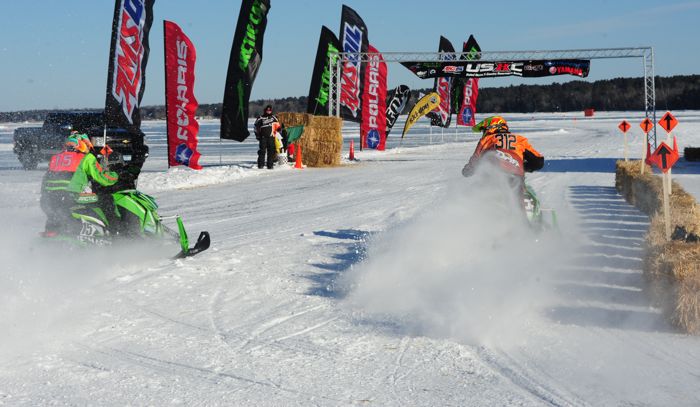 On the sixth lap Selby went in for fuel while Herfindahl stayed out and assumed the lead. The next lap Herfindahl came in for fuel and, upon exiting the fuel lane, came side-by-side with Selby (above). Selby was carrying more speed at this point and moved into the lead, with Herfindahl on his snow flap.

With three laps to go, it looked like it would be a 1-2 finish for Team Arctic, with the drama being WHICH racer would emerge victorious.

What the crowd didn’t know at the time was that Selby was having a hard time hanging onto his handlebars, on account of fingers that had become numb from the cold. The situation was compounded by the fact that Selby was losing his brakes, making cornering even more difficult.

A few corners into the seventh lap, Herfindahl accidentally stuffed a ski into Selby’s track. It wasn’t so hard a hit that either rider crashed, but Herfindahl’s ski carbide would break in half, a fact that Herfindahl would discover a couple corners later when it caused him to crash.

Herfindahl would remount, but would struggle for the next three laps with a sled that wouldn’t corner well in one direction, and that scrubbed a lot of speed. He would eventually finish fifth. 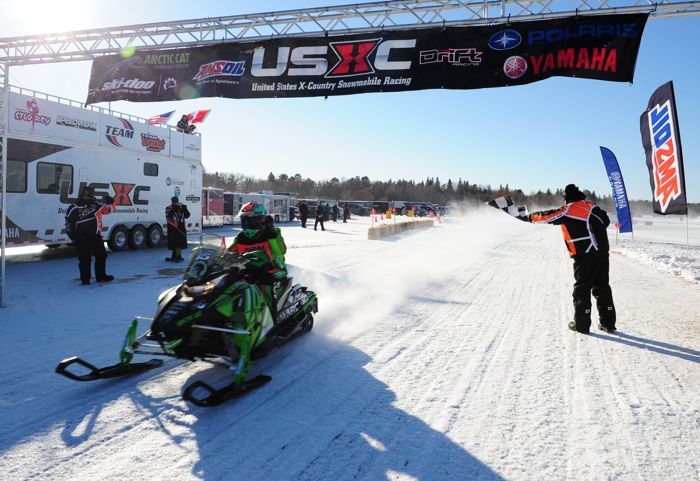 Despite hands so cold that he considered pulling off course (as other racers had done) and non-functioning brakes, Selby somehow managed to maintain his lead for the remaining three laps and score the first Pro Stock class win of his career!

For a guy who has had so many near misses, it was a huge win that was a long time coming. Talking with him after the race, I sensed he felt greater relief than he did jubilation.

Either way, there were a lot of people who were really happy for Selby, including his dad who had come all the way from Grand Lake, Colo., to watch him race! 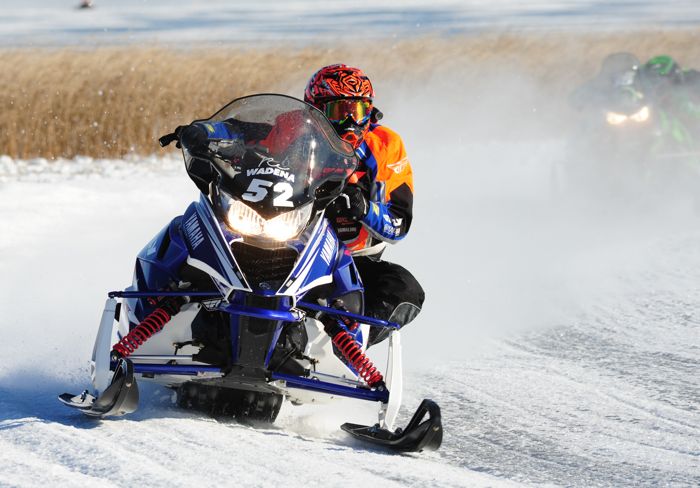 Re Wadena would finish second, 12 seconds behind Selby and 13 seconds ahead of Polaris’s Ryan Faust. It was a great performance by a hard-charging, likable racer who has paid his dues.

Wadena’s second-place is Yamaha’s best Pro Stock finish in USXC: something the team has worked hard to achieve and (I hope) they are very proud of.

A couple blown corners by Selby, and Wadena/Yamaha might have had their first win in USXC.

I’ve been saying it all season long: right now in cross-country is enjoying the greatest parity between the brands that I’ve witnessed in 25 years of covering snowmobile racing. 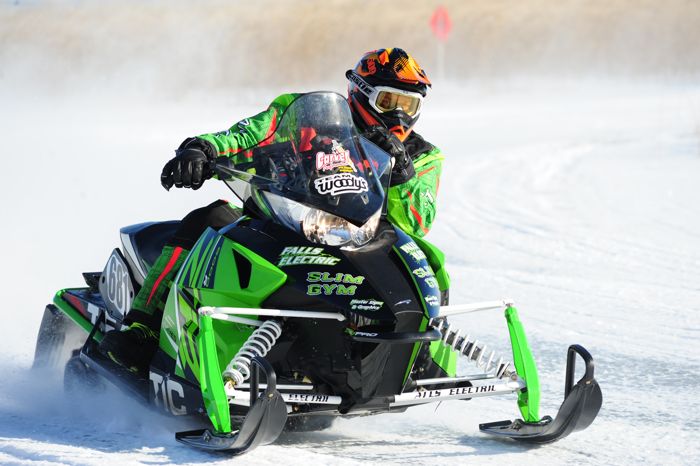 For the record, Team Arctic scored 13 wins in 19 classes, with 37 of 56 podium positions! (Arctic Cat will distribute their press release with full results soon, which I’ll post.)

Congratulations to all the racers who competed in Park Rapids!