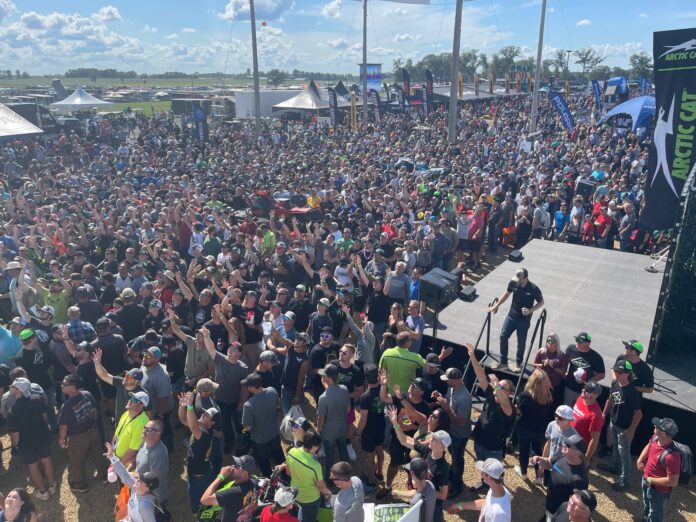 Just settling back in to the office after Hay Days. I have to say this as my main take-away, “It was a great weekend to be an Arctic Cat fan!”  I just wanted to say thank you to all the people who stopped by ArcticInsider to visit and say Hi, it was great to meet you and I truly appreciate the support you show this site!

On Friday night, Arctic Cat invited myself and the rest of the snow media to a private event where we got to take a peek under the bodywork of the new CATALYST platform and get generally educated by the engineering staff on some of the many technology highlights.

We were also introduced to some new and familiar faces within the marketing and engineering teams, and it makes me feel really good about the people placed in their respective roles. In general, the new faces have utilized their previous work experience and combined it with a better understanding of the powersports industry to start moving forward quickly with all things marketing. (Events, Demos, Social, Web, Videos, Ambassadors etc.) And despite popular belief, there are many legacy employees with 20yrs + experience who are still as passionate and engaged as ever who continue to push the boundaries further. Personally, I think that is a great mix, and all are committed to the brand. After spending time with all of them this weekend, Ill try to do a better job of introducing them to you via some interviews here.

This is no BS, but I was blown away with how many changes and further advancements were made to this platform since my time employed by Arctic Cat, while being part of the strategy and planning meetings. Literally, EVERY piece has been touched, and is new from ski tip to snow flap with a focused intent and purpose! The extent of R&D investment in this project proves to me, Arctic Cat isn’t going away any time soon.

We were told Pre-orders will happen in February, and over the course of the next four months, Arctic Cat will be releasing more detailed information, photos and videos to help educate us all on the new designs. Personally, I think that’s a smart plan, because there is a lot of tech changes to absorb versus the initial look at the exterior of the three pre-production units unveiled at Hay Days. So, here’s a look at the CATALYST platform and stay tuned for a volume more of information in the coming months. – Kale

Engineers focused on making the CATALYST platform a centralized design so the operator is the active force requiring less rider effort to corner and carve, adding more control than any platform before it. In the coming months, Ill share why Arctic Cat’s laydown engine design is one of the keys to the CATALYST’s mass centralization.

LIGHTWEIGHT IS THE RIGHT WEIGHT

At this time, the media weren’t given actual model weights on the CATALYST platforms but I do know the target goals and know they will lead the industry without compromising strength. A focus on fewer parts and the utilization of different composite materials, providing a drastic weight reduction for Trail, Crossover, and Mountain, will make it one of the lightest platforms available.

DURABILITY AND EASE OF SERVICE

The new drive system is belt-driven, unlike the current chain drive, resulting in fewer parts and allowing more power to the track with increased durability. The panels making up the bodywork are a toolless design allowing for easy removal and greater access to key components such as the belt, oil reservoir and coolant. The new seat is quickly removable with a quarter turn for easy battery access.

Rider ergonomics have been a key focus, as the first thing you’ll notice is how narrow the new CATALYST platform is. The narrower, centralized design, provides an agile, easily maneuverable sled that minimizes rider fatigue and makes the operator a more confident rider while becoming one with the sled.

The CATALYST platform has an aggressive exterior design to lead what a state-of-the-art, cutting-edge snowmobile should look like. Its sleek, aerodynamic, and agile look, with a signature-look LED headlight, complements the innovation found inside. Sliding lap joints provide seamless transitions in the bodywork for some of Arctic Cat’s best fit and finish.

Engineering kept commonality of parts for the front/rear suspensions and steering between Mountain, Trail and Crossover segments the same where it made sense, but also focused on providing use-specific systems based on those segments. The geometry changes made, paired with the new suspension, give the CATALYST platform rider a more position-reactive snowmobile which results in a more confidence-inspiring, agile ride experience. The snowmobiles work in tandem with the rider to have the ultimate in cornering on-trail, and carving off-trail.

The concept is one we’ve all come to love and hope for, so it’s welcoming to see Arctic Cat has created ATACH for the CATALYST platform. This will be their first integrated accessory mounting system allowing for quick and easy lockdown. To prevent theft, the system comes with a set of keys allowing you to physically lock your accessories. As a marketing fan, I truly like the ATACH name, which plays off the current ATAC designation, but the pronunciation truly describes it as an Attach system. (Well done!)

WHAT YOU DIDN’T KNOW ABOUT NAMING THE NEW PLATFORM – CATALYST

Most reading here are aware that Arctic Cat ran a naming contest for the new platform in July. The general idea was to have consumers enter their best name ideas, and one would be chosen and unveiled at Hay Days. The name chosen, and unveiled, was CATALYST. In my opinion, it’s another great marketing name that pinpoints what this platform truly is. (An agent that provokes or speeds significant change or action)

So, what’s your point, Kale? I’ve seen a few internet comments on the ArcticInsider social pages since the unveil, “The contest was bogus.” Turns out a few people were incisive enough to find the CATALYST name had been entered for trademark approval by Arctic Cat back in April before the contest was even announced. (Nice sleuthing everyone, but there isn’t a conspiracy here)

Naming a vehicle, or component, is one of the hardest things to do when launching something new. Here’s a high level look at how the CATALYST name came to be chosen.