I’ve had a passion for Arctic Cat el tigres since I was in Junior High (which was quite some time ago).

In the fall of 1981 I purchased a 1975 Suzuki Fury which had a Kohler k440 2RS motor from a Mercury Sno-Twister. This sled had in fact been set up by legendary Team Arctic engineer/mechanic Hubert Fixsen, and it hauled ass!

In the summer of 1982 I turned it into a 1975 el tigre with 1977 decals. A couple years later I sold this sled in order to purchase a 1981 6000 tiger from Brian Nelson, back when he owned Nelson Marine. It had Larry Coltom/HPE porting, pipe, 44 Mikuni’s and it REALLY hauled ass. So much so that I got the nickname “The Cat Kid” because I’d beat up all of the Indy 600’s on Green Lake in Spicer, Minn., in the winter of 1985. This is a name that has stuck with me since.

In 1986 I purchased my first new sled: a 1987 Arctic Cat el tigre 6000 from Nelson. In the spring of 1988 I went to work for Brian’s dad Dale at the truck dealership, which opened up a door to a whole new world of Arctic Cat people and performance. I was able to go to Arctic Cat/West Yellowstone as well as become good friends with Steve Thorsen & Dean Schwarzwalter at T/S Racing. I was able to see some of the ZR prototypes that Brian, Larry Miller and Hubert built, as well as seeing many T/S Racing projects.

I learned a lot from those guys! 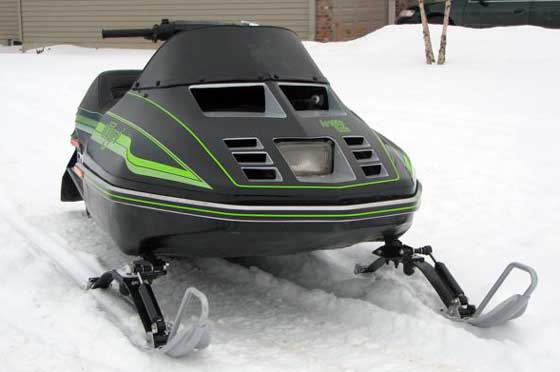 Fast forward to the summer of 2007, when I got the vintage bug and built a couple 1981 tigers, one stock and one custom (above). After finishing those projects I wanted to do a custom AFS tiger, but in February of 2009 my son and I were involved in a car crash which derailed those plans. 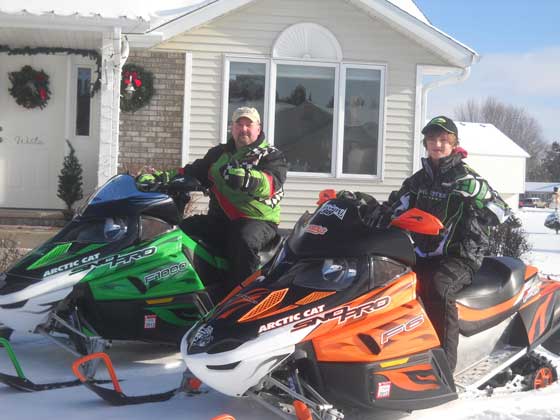 After spending time at the Mayo clinic life got a bit more complicated when I was diagnosed with Multiple Sclerosis. Thanks to the outstanding comfort of the Arctic Cat Twin Spar Chassis, I’ve been able to continue riding along with my son, Trevin.

Last July the bug returned… I wanted to revisit doing another custom Cat.

On a Friday night I was having a beer on my deck and surfing the Web when I spotted a 1987 el tigre 6000 that was owned by a guy in Fort Dodge, Iowa.

The closer I looked I noticed what looked like MY 1987 6000 that I’d originally purchased new!

I contacted the gentlemen and found out that it was indeed my old sled. I tried to buy it but unfortunately he wouldn’t sell. 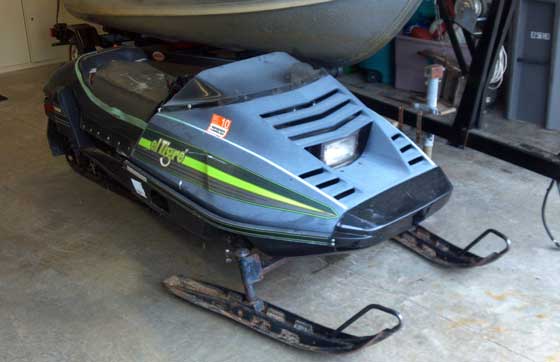 I already had a lot of tiger parts so I proceeded on the custom restoration. 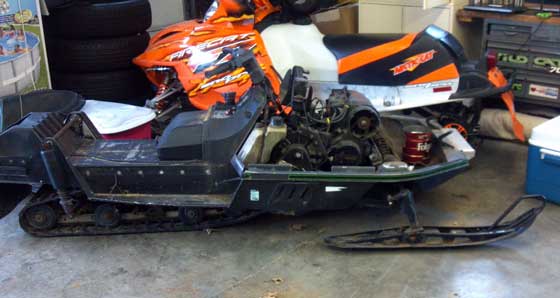 I did some trading with Tom Rowland for a NOS 1988 hood as well as some great deals on parts (thanks Tom!). 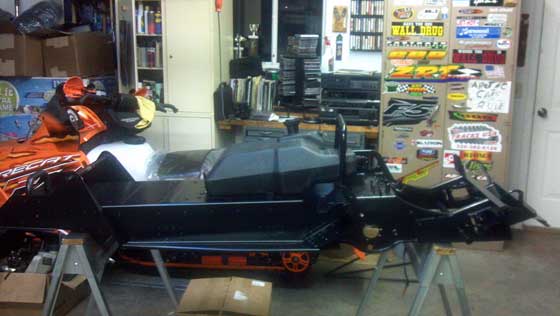 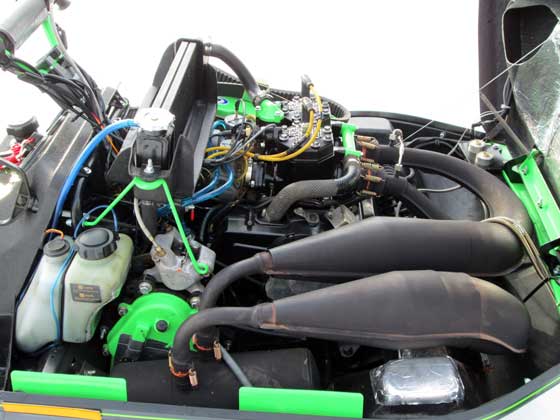 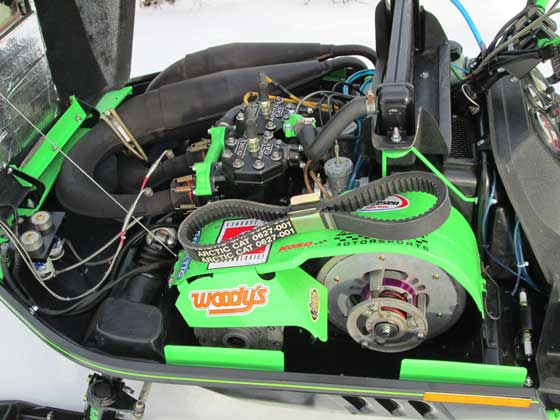 The engine is the 11-port 530cc version, which was the fast one.

Finding a good seat was the hardest thing for me. The seat is good, but not 100%.

I have well over 300 hours in the sled, which is 99% done with only a few details remaining.

I had a rough idea of what I wanted the sled to be prior to starting, but I also made changes along the way. 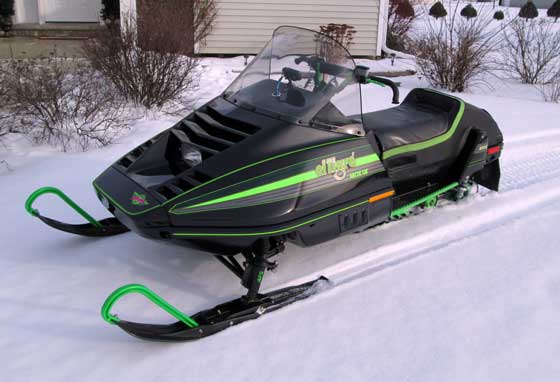 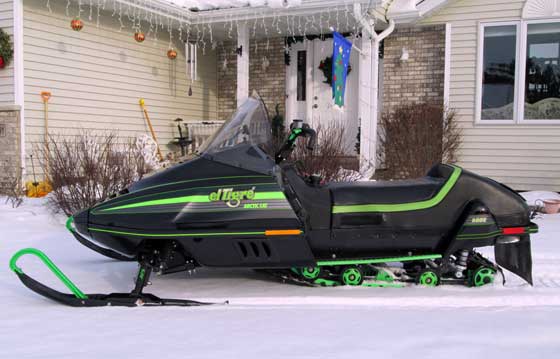 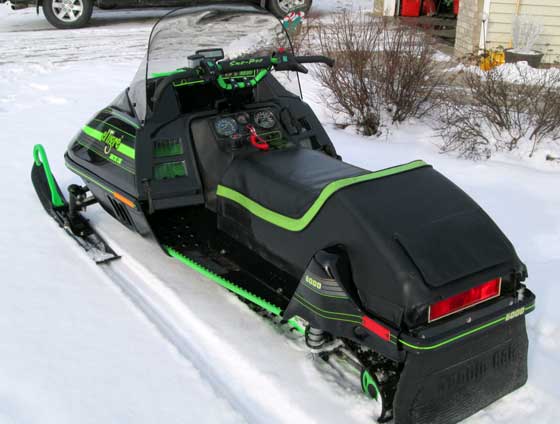 I would tell you how much I have in, but my wife would kill me. I’ll say this though: I originally paid 4k for my new ‘87 tiger when I bought it from Nelson, and I think I’m damn close to that with this custom project. Ouch!

I live in Chippewa Falls, Wis., and am planning to do the SHOF Ride with the Champs and some other vintage rides so that I can show it off.

With my health I don’t know if this will be my last sled, but I wouldn’t mind doing a Wildcat or ZR700 sometime down the road. Only time will tell.

I like to spend time with Trevin, who is as much of a Cat fan as me. Below is the two of us at Arctic Cat from a couple years ago. 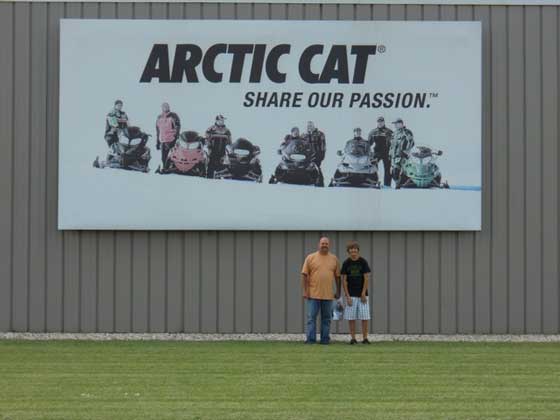