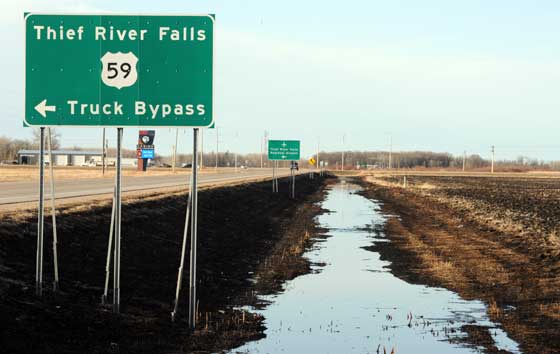 Yep, the crazy-warm spell that hit most of the country did serious damage to the ditch riding in TRF. Less than a week earlier, this section of Hwy 59 would have been ridable. 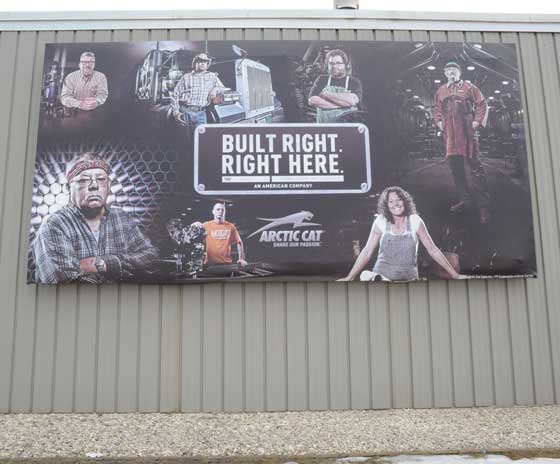 The billboard on the outside wall of the Arctic Cat factory. 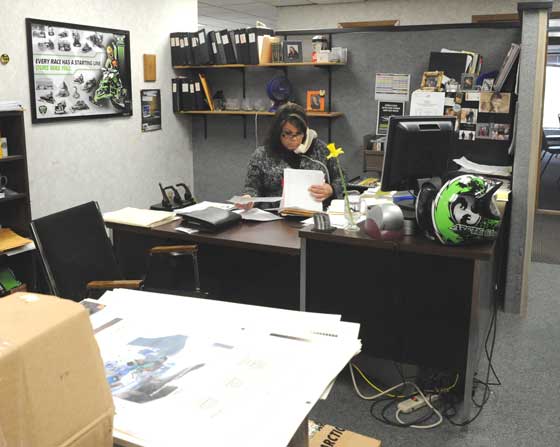 First stop: Marketing dept., where Kathy Johnson continues her boycott of allowing me to do an interview with her for this Website. And she still gets mad whenever I sneak a photo of her as she helps coordinate marketing opps. 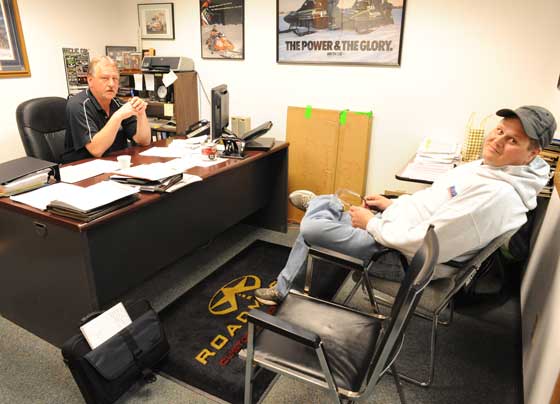 Meanwhile, Pat Hanson (R) cracks a wry smile at the prospect of hauling show machines to various locations in the next few months. While he officially operates transport for Arctic Cat shows, press events and the like, Hanson is a jack-of-all-trades who also rides sleds and ATVs for the camera; fixes broken equipment at events (including stuff that I unwittingly break); and keeps the play toys running at their optimum. 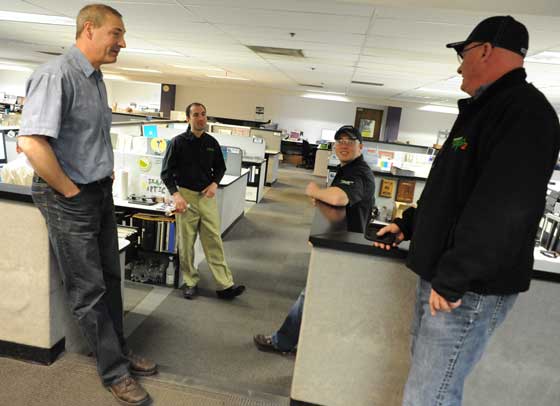 Having migrated over to Engineering to find Joey Hallstrom (R), I caught a conversation between him and Doug Wolter (L, Director of Snowmobile Engineering); Dale Hahn (tan pants, NVH engineer) and Keith Homstad. While I’d like to say that the conversation was ONLY about snowmobiles, I think the subject of hockey came up, but only momentarily. 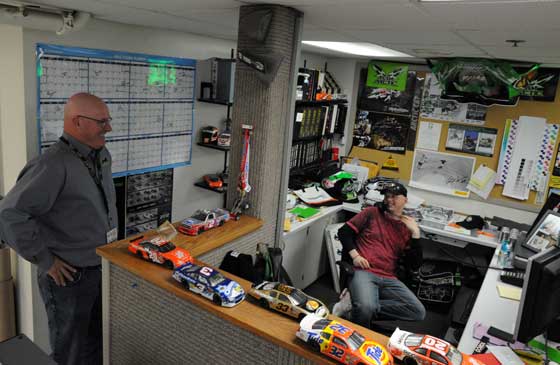 Joey and I took a tour of what’s going on in Engineering, with a stop in the Styling Department, where Corey Friesen was applying his artistic expertise to several projects. However, the conversation quickly turned to the 5th Annual Arctic Cat Hockey Night: Quest for the Cup hockey tournament.

Joey was throwing down the gauntlet, so to speak, and making outstanding proclamations about his goal-scoring prowess. 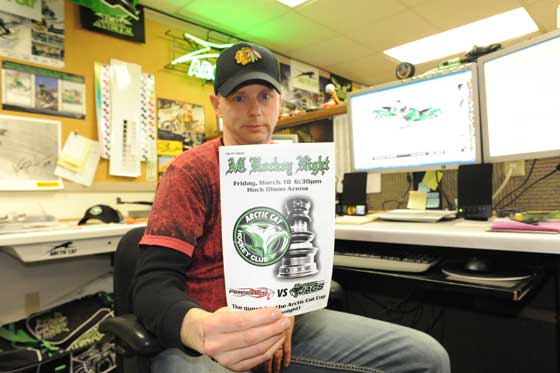 In addition to playing goal, Friesen organizes the Arctic Cat Hockey Club and the tournament, for which he produces a sweet flyer he’s shown holding in this shot.

The Arctic Cat Cup will get its own post within the next day! 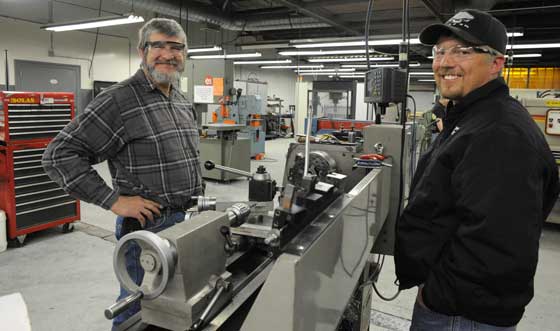 Later in the day, while walking through the machine shop, I ran into Kirk Hibbert (L) and Ron Black. Kirk was working brake components for Tucker’s race sled on a lathe, while Ron was talking about engineering projects connected to the Wildcat UTV. Back in the 1990s, Ron was Kirk’s race mechanic, so these two have seen and experienced lots of stuff together. 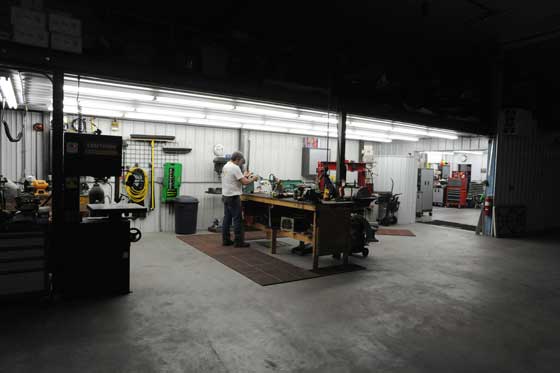 MUCH later in the day(at 10 pm to be exact), out at his race shop, Hibbert was still working brake components on a lathe, getting stuff ready for the Lake Geneva and Clash of Nations (Sweden) races. 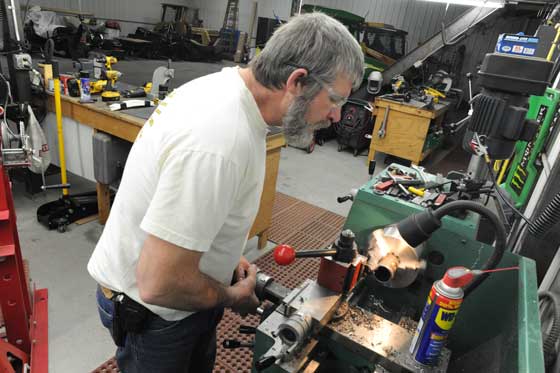 For the better part of the day, Kirk worked on turning some brake discs and cutting shims for some ideas he’s testing, all part of comprehensive effort to continually develop race sleds and win races.

With the switch from the former, highly-developed, Wilwood master cylinder and jackshaft-mounted caliper to the new Hayes Radial Master Cylinder system with the disc/caliper located on the driveshaft, Hibbert and others are working to find the exact feel and power they’re accustomed to when they grab the lever.

Kirk is a firm believer in a driveshaft-mounted caliper, having first developed a system on the 2002 Sno Pro racer (the precursor to the Firecat). 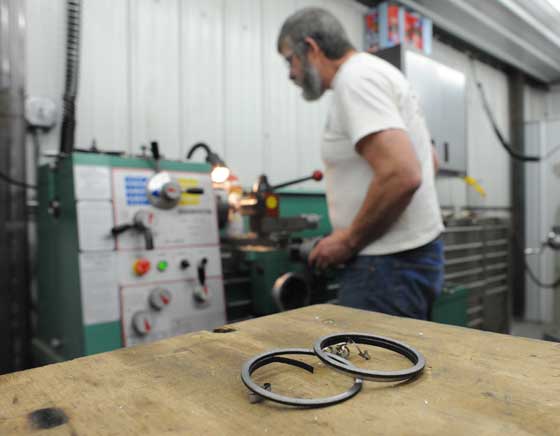 Two shims done, one to go… 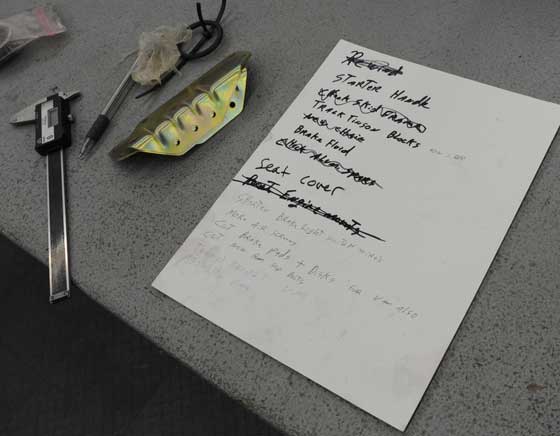 Kirk’s to-do list for Geneva/Sweden. Man, what I would give for a collection of to-do lists from Kirk, Coltom, Thompson, Dimmerman, Scheele, Nelson, T/S Racing, etc… How cool would that be!?! 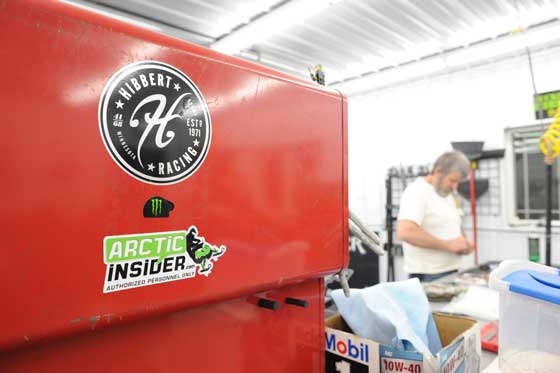 I paid the Hibberts a lot of money to get the Presenting Sponsorship package on their shop tool box. Definitely a worthwhile sponsorship. 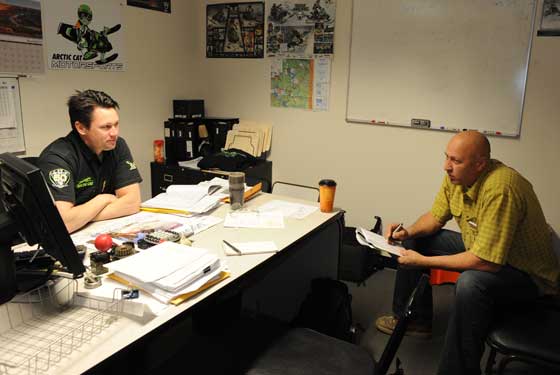 Friday morning, bright and early and in Troy Halvorson’s (L) office, where he and Ron Bergman were discussing the pros/cons of various track lengths.

These guys are dutifully-aware that race track competitors are racing with 128-in. Arctic Cat tracks.

As is the case with most developments, the crew discusses the merits and potential drawbacks to a certain design, sprinkled with new and creative solutions.

I’m always impressed with the creativity of engineers, as well as their ability to see all aspects that affect the development of a single part. In the case of the tunnel protectors, they discussed everything from ease of installation (will customers accept removing the rear arm bolts to swing the suspension/track away from the tunnel?) to fit/finish (should the protectors be affixed via rivet, bolt or neither?) to cost. 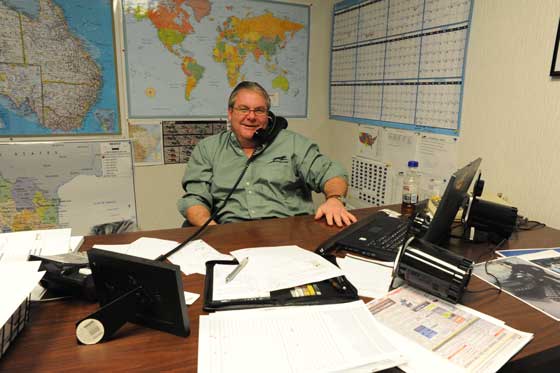 My head flush with ideas, I went back to the Marketing department where I saw Rick Stokke working his magic in the international sales arena. 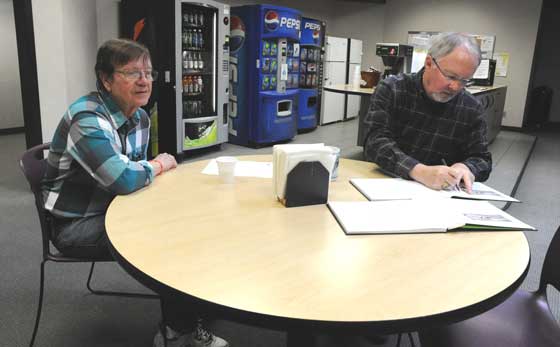 And in the break room, Dean Lawrenz (L) and Gary Flynn were putting the wraps on a discussion about service information for international markets.

Both Lawrenz and Flynn have been at Arctic Cat for decades, and both graciously agreed to be interviewed in the coming weeks. Stay tuned! 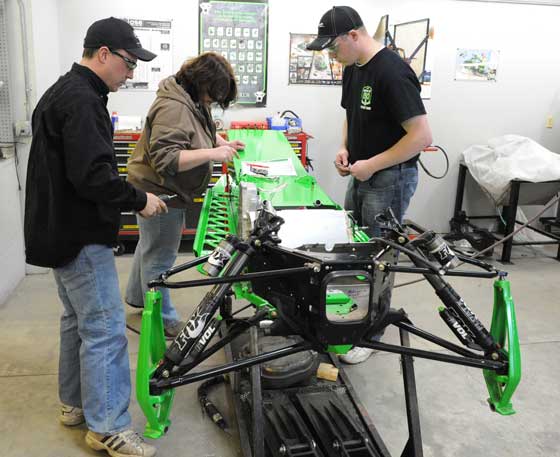 In the afternoon I headed down to what’s referred to as the “ZR Shop,” where race sled development occurs. Sure enough, development was in full-swing as Brian Dick (L), Michelle McCraw (middle) and Dayne Efta were busy assembling a Sno Pro 600 test sled that incorporates some ideas that have surfaced during the race season.

It’s amazing that these three have literally memorized nearly every part number on the sled. Seriously, they can rattle off the part number for every rivet, nut, bolt, etc… as if it were their phone number.

Working day-in and day-out with them, these machines become their “children” so to speak, about which they know every detail and nuance. It’s very cool. 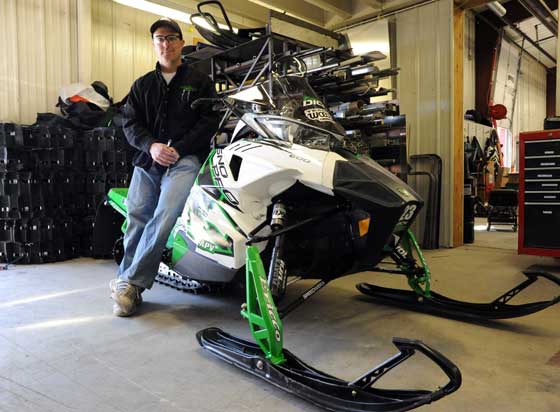 I made Brian throw down a pose with the sled that he’d raced in Pro Open the weekend prior, at the USCC season finale in Warroad, Minn. The sled sported some new ideas and componentry that Engineering and the Race Department wanted tested, and that proved both successful and productive (Brian finished fourth).

This sled and the one that was being assembled were slated for more racetrack testing this week, followed by more testing out West in the coming weeks and months.

And so the evolution of future race and customer sleds continues. Winter may have ended in TRF, but the riding/developing never stops with this crew.