About the Arctic Cat Hockey Club

Back in 2008 a small group of 17 Arctic Cat employees got together for a hockey game and, just for fun, played for a trophy built by a couple of hacks in engineering. Since then, the club has grown to 50-plus employees and suppliers that get together each Wednesday to get some exercise and play the best game on earth.

We play for bragging rights, sportsmanship and the chance to have their name placed on the coveted Arctic Cat Cup, for all time. And we play to prove that you’re never too old or not good enough to play for something special.

After a season of regular Wed. night play among the 50-plus Arctic Cat Hockey Club, last week saw the 5th Annual Arctic Cat Cup tournament go down in historic fashion.

There were enough players to comprise four teams, thus the need for two playoff games that would determine the two teams playing for the Cup.

The brainchild of Arctic Cat stylist Corey Friesen, the Arctic Cat Cup combines many great elements, such as camaraderie, competition, good-natured taunting and the awesome sport of hockey.

Smack-dab in the middle of Arctic Cat’s engineering department sits a display containing elements from the Arctic Cat Cup history, including the sweet Cup (made from salvaged ATV rims), commemorative pucks and pictures of the four previous Cup-winning teams.

There are many awesome aspects of the Arctic Cat Cup/Club endeavor, but after having experienced the whole thing firsthand last week, three stick out as extra-cool.

One of the three is that the 50-plus people who play comprise nearly every area of Arctic Cat, including Welding, manufacturing (snow and ATV), Accounting, Field Test, Engineering (both Snow and ATV), Service/Publications and some schlep who writes for an Arctic Cat-oriented Website. Cool!

(I’ll mention the other two extra-cool aspects later in the story.)

The play during Wed. night’s playoffs was fun and intense.

The first game saw the Prowlers beat the Sno Pros to advance to the Cup. Likewise, the Wildcats topped the Cougars to play in the big show.

While the Prowlers might have won the playoff game against the Sno Pros, I should note (because he begged me to do so) that Joey Hallstrom (upper left, black uni, stick in the air) of the Sno Pros scored the first goal of the tournament.

Not surprisingly, Joey sent an email first-thing the next morning containing the above image, with the title, “The Goal Heard Around the World.”

Snowmobile engineer Kevin Thompson played a strong first game including notching a goal. A previously-planned snowmobile trip would prevent him from playing in the Cup, so after the playoff game he gave us his best impression of the Herb Brooks/Miracle speech and sent us on our way.

By the way, Kevin is holding his locker room nametag… one of the many cool elements created for each player by Corey Friesen.

This illustrates the second super-cool aspect of the Arctic Cat Cup: outstanding organization. Corey produces the nametags, creates a printed event program, got jerseys made, has special commemorative pucks, writes monthly hockey reports, organizes a tournament draft and somehow manages to stop nearly every puck that gets flung at him week-in and week-out. You do an awesome job, Corey!

If there’s competition happening with Arctic Cat people, you can bet Roger Skime will be there to watch. He and his wife Bernice were checking out the action during the playoff game.

After the two playoff games concluded, the names of all the players on the two losing teams were put into a hat, with 10-or-so drawn and placed on the two winning teams.

Lots of players, families and kids played on the ice and had a fun time. Here’s Joey “I Scored First” Hallstrom with son Jesse and daughter Gabby.

Prior to the championship game, both teams lined up and got true introductions.

Lots of friends and family came to watch and cheer.

During the break between the first and second periods, the Prowlers discuss strategy for putting the biscuit in the basket. Our coach Doug Wolter (sitting on the boards, black sox) kept a cool head despite some missed chances by the team.

We actually got the ice resurfaced between the second and third periods, so a little locker room strategy unfolded for both teams. Here in our locker room, we threw out lines from Miracle and Slapshot in equal proportion.

It must have worked, because the Prowlers scored a few in the third period, beating the Wildcats 5-1.

Every game throughout the weekend concluded with handshake. Seriously good sportsmanship from everyone, despite the fact that competitive juices were flowing.

Okay… the third element of the Arctic Cat Hockey Club/Cup that is most-cool, is that a wide range of players take part. Some were high school hotshots while others literally just learned to skate this season. Most were somewhere in-between.

Yet EVERYONE got equal ice-time!

I’ve played a lot of hockey over the years, and there’s a tendency for most leagues to squeeze out (or never invite) the novices and first-timers. Not with the Arctic Cat Club. Everyone is welcome, everyone gets equal ice time. I love that!

Both teams share some ice for the post-game photo…

… after which there was all kinds of hamming and goofing. Here Ray “Bubbles” Barthold throws magic-face at Corey “Frozone” Friesen’s son.

Corey rightfully holds the cup, having played net for ALL FIVE championship teams!

You did a phenomenal job in net and behind the scenes, Corey! Thanks for all the hard work and great play.

The post-game celebration at the Black Cat included both teams, lots of laughter and great stories.

Each of the Prowlers got to drink from the Cup, including yours truly.

It was such and honor and joy to play with this group, I want to thank everyone in the whole club for the experience. And I can’t wait to play in the next Wed. night game, next time I’m in town. 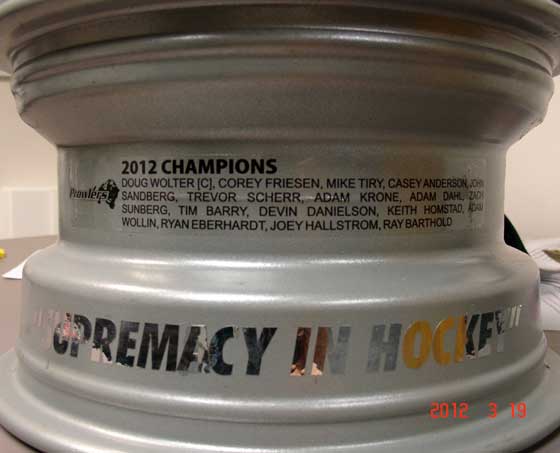 The list of this year’s winning team, the Prowlers.