A May Day at Speedwerx 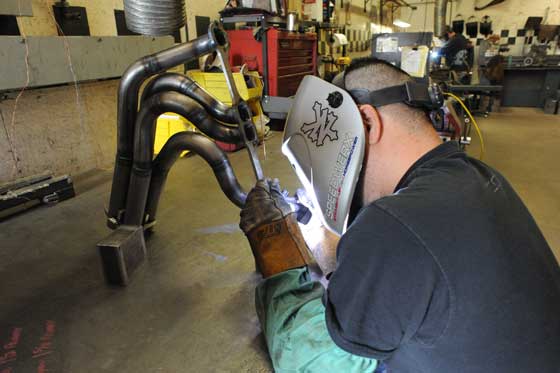 I recently spent a day at Speedwerx, where the high-performance gurus were up to their eyeballs developing, calibrating and building stuff that coaxes the last bit of juice out of all kinds of vehicles. 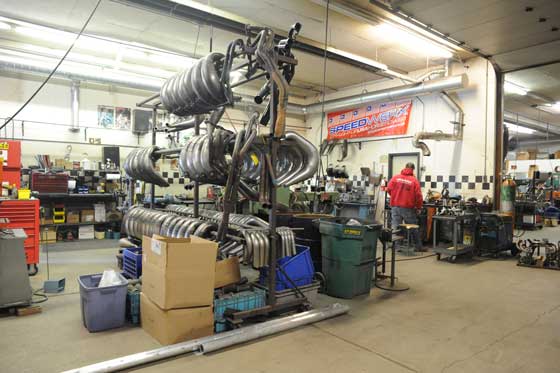 The welding production area was humming along nicely, with the familiar sound and smell of welding permeating the building. Lots of extra horsepower represented by all those Speedwerx-badged pipes. 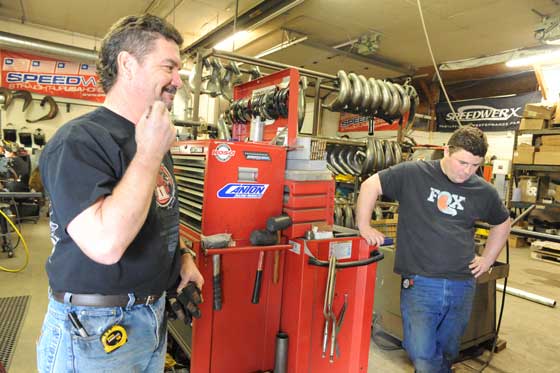 There are lots of people to credit for the success that Speedwerx has enjoyed over the years, but none more so than the guy on the left, Steve Houle. One of the most successful oval/first-gen-snocross/cross-country racers of the 1980s and 90s, Steve learned high-performance in the era when racers had to become tuners in order to reach the top of the sport.

Steve parlayed that knowledge into starting Hot Seat Performance, a Polaris-focussed speed shop then, later, into Speedwerx, a mostly Arctic Cat-focussed business. I and many other Arctic Cat guys breathed a HUGE sigh of relief when Steve started working with Arctic Cat, because we’d all battled his amazing abilities when he was racing and building stuff for the other camp.

On the right in the above shot is one of Steve’s sons, Jeremy (Larry, his other son that works at the shop, was too busy working that day to get his picture taken. Bad Larry!).

Jeremy also cut his teeth racing snowmobiles and learning development/tuning from Steve. For the past several years, Jeremy has taken an increasingly-larger role in developing Speedwerx products. 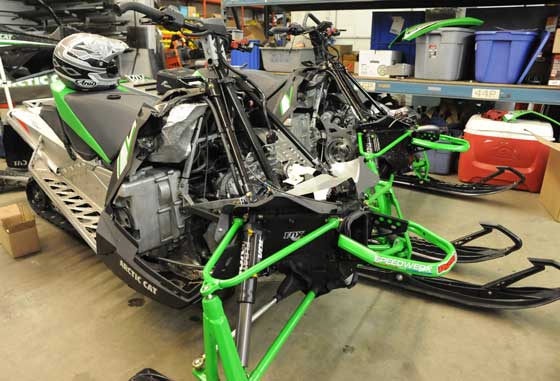 Speedwerx is first and foremost a snowmobile performance shop, and despite it being May with no snow in sight, there were a half-dozen ProCross and ProClimb Arctic Cats in various stages of assembly, with new ideas and concepts being tested at the shop. 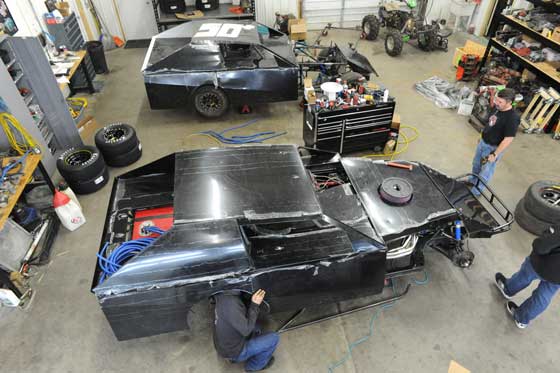 High-performance automobile dirt-track parts are relatively new to the Speedwerx arsenal of performance goods. This venture started a few years back when Jeremy first got into dirt-track racing, won a pile of races and then coaxed his dad into joining him.

Always looking for an edge, the pair bought the typical engine performance goods from established shops. And when it became apparent that they could push the performance boundaries further, they designed and built their own stuff.

The results have been nothing short of awesome, with victories in the triple-digits, including Speedwerx-built engines that have racked up 51 victories already this season. 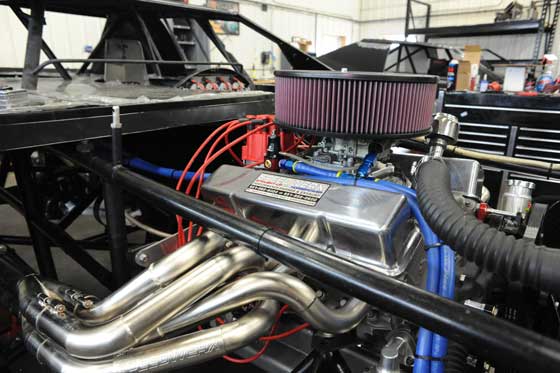 They make engine packages for Chevy and Ford, including CNC block lightening, porting and exhaust systems.

Due to the success of the racers using their parts, the “little car project” as they first called it has absolutely taken off. On this day, Steve was busy tack-welding headers so they could be finish-welded. 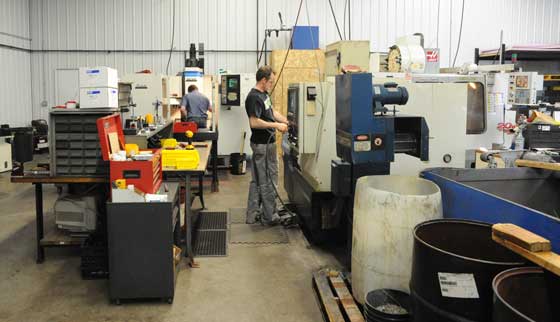 Elsewhere in the Speedwerx compound, the CNC machines were humming along, building all kinds of cool things from clutch weights to shock pistons to super-charger components. 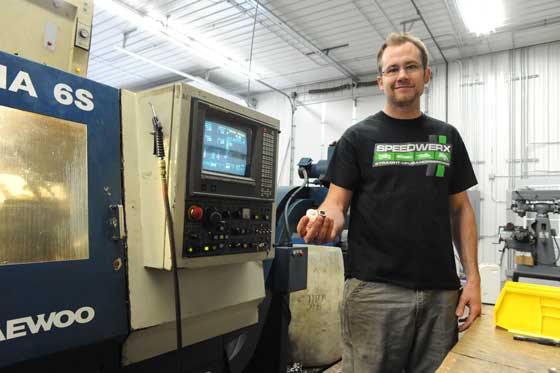 Travis Michels is one of two CNC masters at Speedwerx who programs the equipment and manages production. Here he’s showing off some clutch bushings. 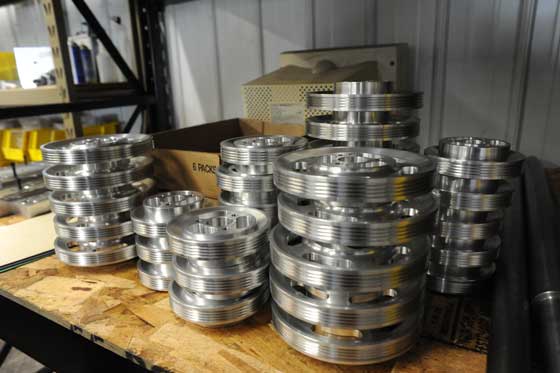 More CNC-produced goodness, in the form of the Speedwerx Procharger kit for Arctic Cat 800 snowmobiles. This has been a huge hit for riders. 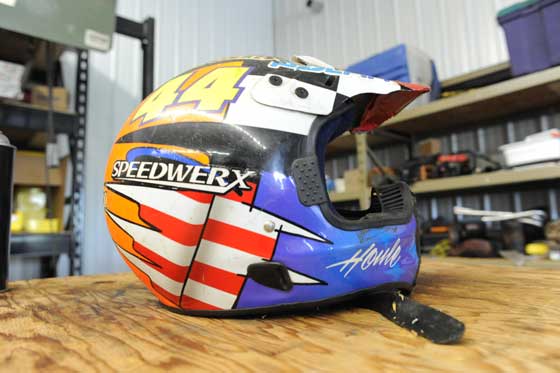 When I see one of the last helmets that Steve competed with in snowmobile racing, I have to snap a photo of it. 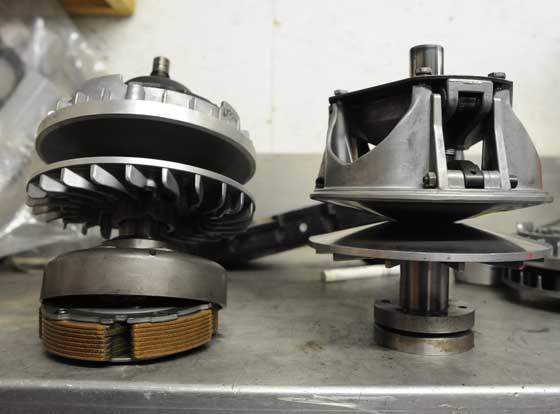 The crew has spent a lot of time and energy developing performance products for Arctic Cat ATVs and Wildcats. One product that captured my attention was their Wet Clutch Delete System, whereby the stock clutch (left) is replaced by a unit that’s been used in snowmobiles for years.

It took significant engineering by Speedwerx to make it happen, but the result is a clutch system that REALLY wakes up the ATVs, Wildcat and Prowlers due to increased efficiency as well as complete tunability.

How much of a wake-up? According to Speedwerx, the stock top speed (measured on a half-mile paved road) of a Wildcat is about 72-74 mph on average. With the new Clutch Kit, speed bumps up to 82-84 mph on average.

In 500-foot acceleration tests, the Speedwerx clutch kit-equipped machine is three lengths ahead of the stocker. 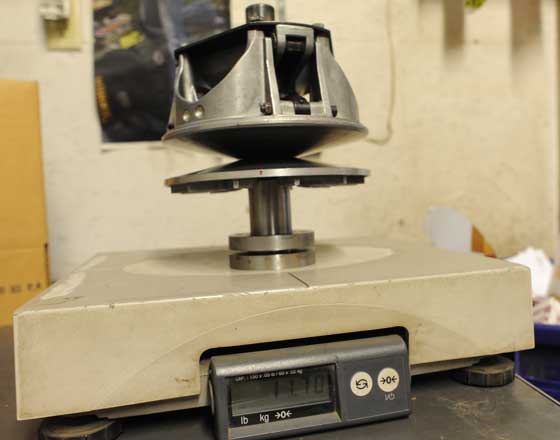 In addition to its improved efficiency and tunability, the new clutch system weighs nearly 5 lbs. less than the stock wet clutch. 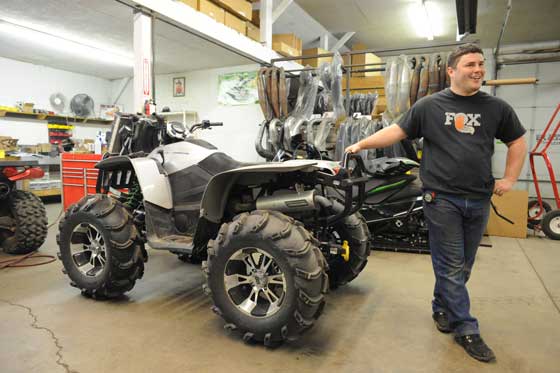 I can personally attest to the blasting-acceleration performance of the clutch kit, having given Jeremy a gut-busting laugh when I nearly rock-blasted his brother’s car while testing the ATV shown here.

Seriously, one hit of the trigger and this baby literally roosts gravel 50-feet out the back. Thundercat and Wildcat owners who want more juice from their buggy should definitely check out this stuff. 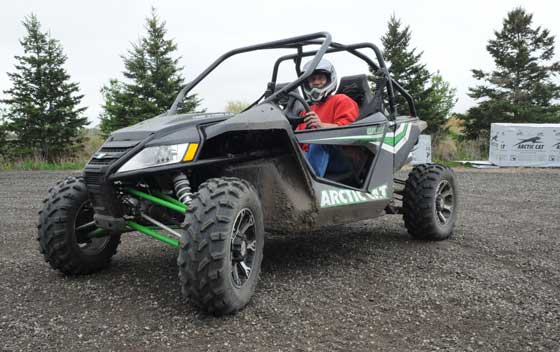 After my banishment from any more mod vehicles, I watched snowmobile grass drag racer (and now full-time Speedwerx employee) Ron Gillund test and tune this Wildcat equipped with a slip-on muffler (10 lbs. lighter than stock, 7-8 hp gain and a nice robust sound that doesn’t pop the sound meter) and new clutch system. Ron displayed the same roost capacity as the T-Cat but, unlike me, he did it far away from the parked cars. Obviously he’s a professional.

To end this photo story, I’ll say this about Speedwerx: Every time I’m there, I’m struck by how many projects they have cooking and how DEEP they are into the machines they work with. Ask Jeremy a question about what works and what needs help on any stock vehicle, and he’s got answers. They test and work directly with people who ride all the time. They’re plugged in.

The other characteristic that defines them is how hard and often they work. When I think of how many races and test trips I’ve seen Steve at, let alone all those that I’m not at, it’s staggering. Same thing for trips out west for Jeremy. There are few if any weekends during the year when they’re not either at a race (sled, ATV or auto), or testing product.

I think that’s cool and explains why they build excellent product.