A November Day at Arctic Cat 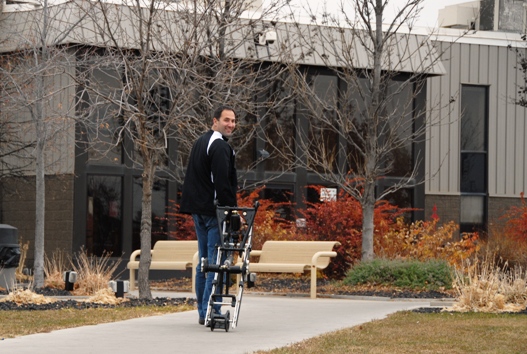 Wouldn’t you know it…Bobby Flame (aka Kale Wainer) is here today. In addition to regularily completing compelling freestyle, tailstanding and ditch-banging maneuvers, Mr. Flame handles media relations duties at Arctic Cat. Here he’s returning a 2012 Slide Action skidframe that had been used by one of the magazines for photography. 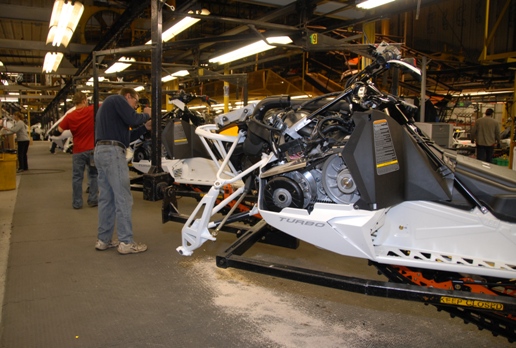 The wonderful, familiar hum of the assembly line was turning out beautiful 2012 F1100 Turbos in Limited Edition trim. Lots-o-white! 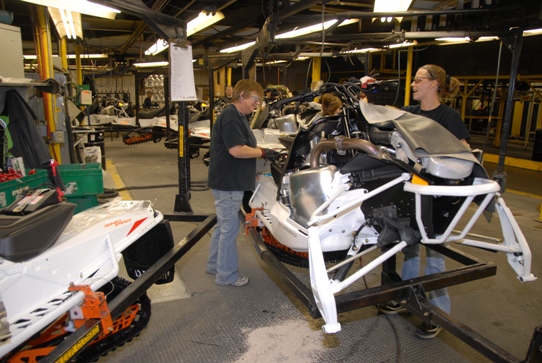 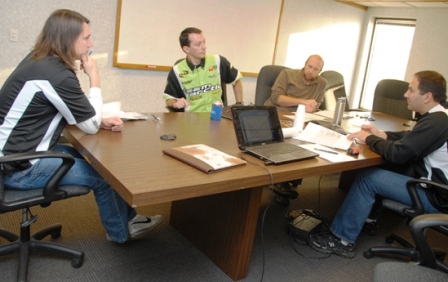 L-to-R: Engineers Troy Halvorson (Performance category) , Lynn Berberich (Touring and Utility) and Kevin Shindler (Mountain and XF) talk with Kale about next year’s model line. Seems a little weird to think that we haven’t even started the winter of 2012 and these guys are talking about 2013 sleds, but when you consider the lead times required for planning and execution of new products, these guys are always working at least one year into the future, and often many years. 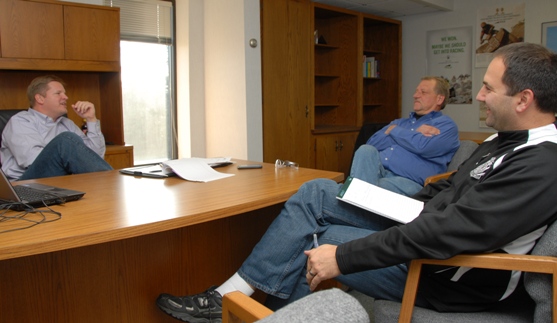 More future planning, this time with three core Marketing guys. L-to-R: John Tranby, Gary Nelson and the in-every-photo Kale Wainer. Here the conversation had transitioned away from strategizing about how to best explain the full-featured adjustability of Arctic Cat suspensions, to retelling of many gut-busting stories of our friend, the late C.J. Ramstad. Lots of fond memories and sincere heartache because of his passing. 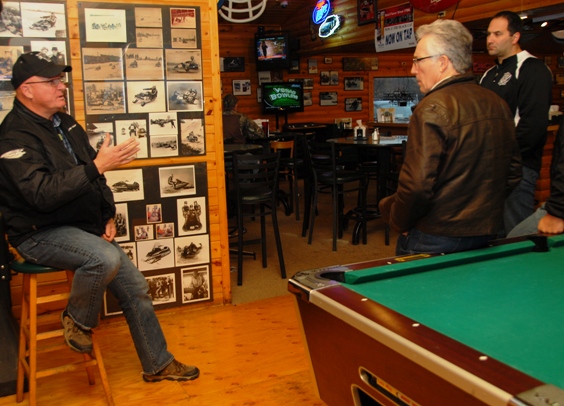 This time of year there’s a definite buzz in the air about the upcoming snowmobile season, and of course racing is part of that. During a quick lunch at the Black Cat, Team Arctic champs Brian Nelson (right) and Joey Hallstrom discussed strategies for Joey to defend his vintage I-500 title this coming season (although I’m pretty sure Brian wants to help DETHRONE Joey and put himself on the top of the podium). 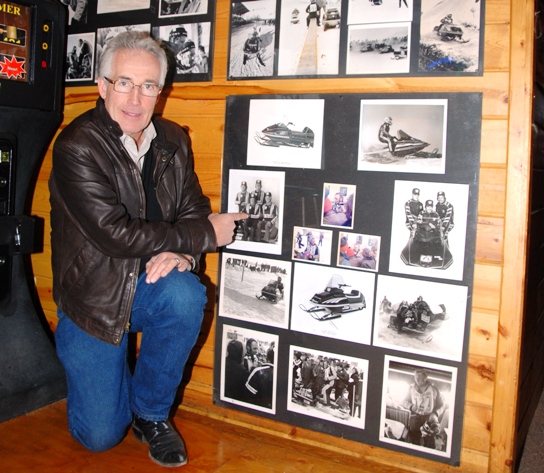 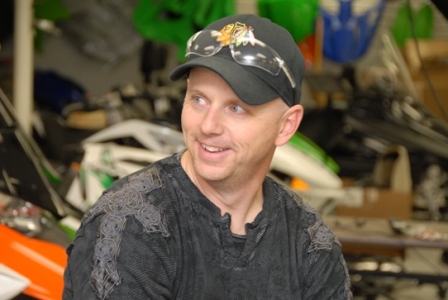 Back inside the plant, I chatted with Corey Friesen in the Styling Dept. Corey was happy that there were no nasty comments about some of his least popular graphic packages in the comments section of THIS INTERVIEW with him. 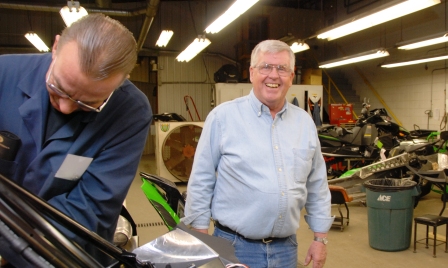 Elsewhere in the Arctic Cat Engineering department, I ran into Dave Beito (right), who was smiling and laughing about turning 62 today. Happy birthday, Dave!

The other Dave in this photo (Dave Sabo) is one sharp cookie when it comes to snowmobile engine design.

When I think of the depth, knowledge and expertise of these and all the other engine gurus at Arctic Cat, I’m in awe of what they’ve already accomplished and excited for all that’s yet to come. 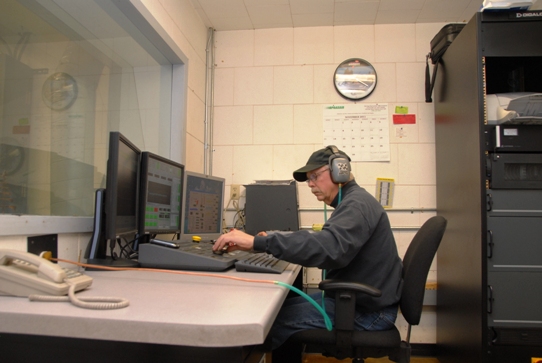 Mike McArdle is another Arctic Cat engineer with a lifetime of experience. Mike is one of the dyno operators at Cat. No, he’s not listening to his favorite iTunes in this shot, he’s listening for detonation/knock on an engine that he’s massaging with some new fuel maps. 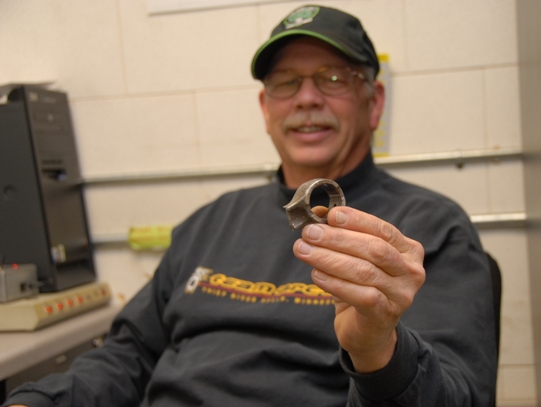 After the dyno run, Mike showed me this “trophy” of sorts. It’s a rod end from an 800 engine that didn’t like the cruel and inhumane testing that Mike inflicted upon it during one particularly nasty dyno run. 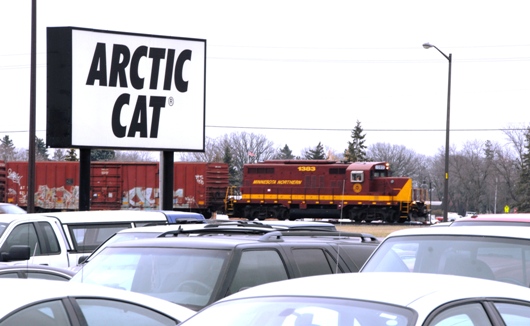 All day long there was a definite presence of winter floating through the air. For sure just being among my friends here and seeing snowmobiles at every turn makes me think about winter. But there was a certain color to the sky and damp chill in the air that I felt from the moment I woke up in the morning. 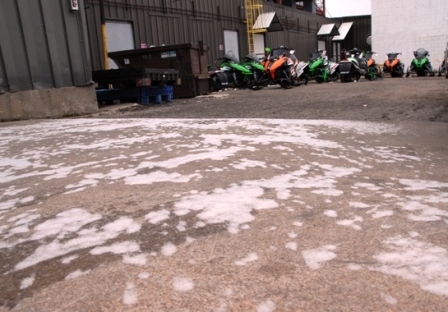 It wasn’t until I peeked my head out of the engineering door around 3pm that I saw what it was that was tugging at my senses all day long: SNOW.

This was the first snow that I saw this season, and what a glorious sight it was! 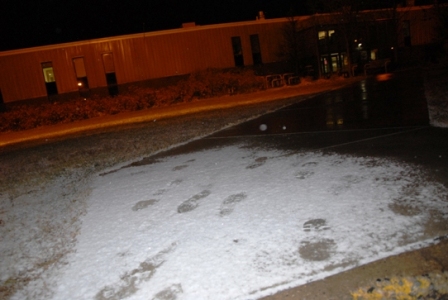 Walking out of Arctic Cat to end the day, seeing footsteps in the light dusting at the end of the sidewalk, I felt that same thrill I’ve experienced my entire life. 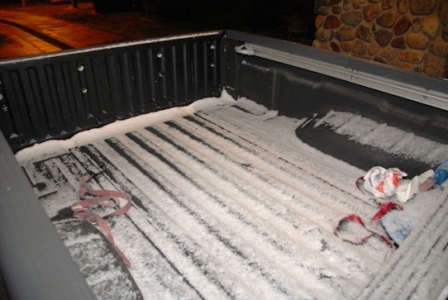 With the bed of the truck nearly covered in white, all I could think of now is riding snowmobiles.

I know this snow isn’t going to last, but it’s confirmation that winter will be here soon. Cold, snowy winter.