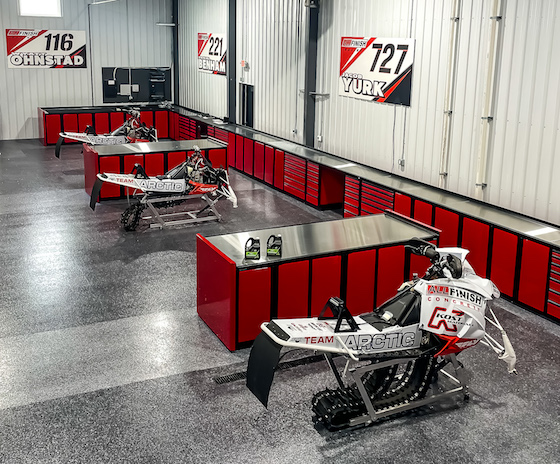 After testing the waters on the ISOC national snocross tour as a family team and race sponsor, All Finish Concrete is expanding its footprint in the sport with the formation of All Finish Racing. The brand-new four rider team will have an immediate presence on the race track, but is also heavily investing in the future of the sport from the grassroots level up.

Team owner, Chad Ohnstad, is adamant about developing a culture to entice new riders into the sport by utilizing his squad’s race facilities in West Fargo to host an ISOC National Snocross, two ISOC Snocross Regionals, and multiple 286 SnoSeries races which place a heavy focus on Youth racing.  All these events present a variety of opportunities for fans to interact with their favorite racers and teams.

The All Finish Pros include Dan Benham Jr. and Jacob Yurk, both proven race winners in the premier division, and both with years of success on Arctic Cat snowmobiles.

Last season, a Pro story of legend unfolded in Deadwood, SD when Yurk completely dominated the Friday final from beginning to end. The 2017-18 Pro Lite champion entered the Pro ranks last season after missing part of the 2018-19 season with injuries. He was an early season surprise, notching two podiums in his first three races. Then, in 2020, Yurk suffered a harsh crash in Deadwood leading to a season-ending back injury.

Fast forward twelve months to Deadwood again, and Yurk found himself grabbing a fabulous start down the long, bumpy back-stretch to lead the Pro Class sealing his comeback story with an impressive finish – his first career win against the Pro field and his second podium of 2021.

In the Pro Lite division, Anson Scheele will represent the team, where he is poised to contend for his first class win and class Championship, after experiencing a few visits to the podium last season in the tough Pro Lite class.

Wyatt Ohnstad, son of team owner Chad Ohnstad, will continue to fly the family flag in the Youth classes where he competes in the Transition categories.

Chad Ohnstad
“My goal is to support youth racing and get them excited about snocross. I really believe in Two Eighty Six youth snocross and will do anything I can to support their series and help the kids, which includes having a ton of free practice nights at our track.

That’s why we choose the Pro riders we did. They are great role models for the kids and will be at our practice nights and the two eighty six races at our track.”

The team is already well underway to establishing a state of the art race shop with on-snow operations based at the Red River Valley Speedway. Riders will be supported by a veteran staff that has been part of numerous National Championships.

Dan Benham
“Excited would be an understatement. This opportunity came out of nowhere and I couldn’t say No. Chad Ohnstad and Chad Kyllo have assembled an incredible group of people, and with the motivation the team and myself have, I think we can put in some really solid results! Plus, it’s gonna be nice to be back on an Arctic Cat that I am so familiar and comfortable with.”

Jacob Yurk
“Going into my third year in Pro, it’s time to start making a push to the front of the pack and stay there consistently. Riding for All Finish Racing will give me the tools to do just that. We have some great resources and endless knowledge which gives me the confidence my sled will be great in all conditions this season, so we can be up on the podium. I’m grateful for the opportunity, and I can’t wait to get on these Arctic Cats and begin testing.”

Anson Scheele
“I’m really excited to be working with the All Finish Racing team. We are going to have fun and win races this year. We are going to dial in our Arctic Cats and focus till the end.”