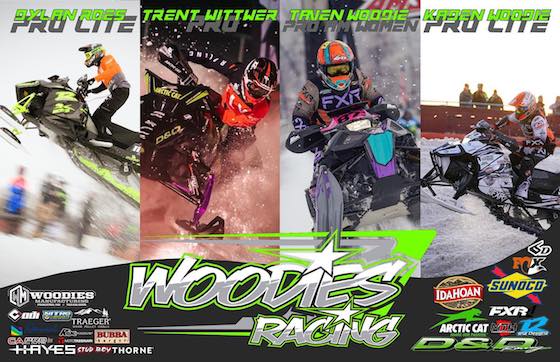 The Woodies Racing team has added to their rider roster and has made some key crew changes for the 2021/2022 ISOC National Snocross series.

In the Pro class, Trent Wittwer joins the team, and will do so completely healthy and ready to chase down podiums. – Last season, Wittwer showed he was a front runner in the Pro class in Fargo, ND, securing a strong third place finish, but a nagging wrist injury plagued Wittwer throughout the season leading to mixed results. Wittwer has confirmed he’s 100% and is optimistic about his results for a new year, new team and new equipment.

Dylan Roes is joining Woodies to represent one of their two Pro Lite riders. Roes made huge strides in Pro Lite last season and returns to “Leave nothing on the table”. Roes has leaned on his dedicated training program coach this summer, Dennis Kopaz, to ensure he is doing everything he can to be at the top of his game both mentally and physically.

It’s been said, “Racers are only as good as their equipment.” That can be argued, but Woodies is putting any debate to bed by adding two expert Arctic Cat tuners to their roster – Dale Roes and Jeff Wittwer. Roes is one of the co-founders of legendary D&D Racing who has been specializing in making go-fast Arctic Cats and putting them up on the podium since 1988. And Wittwer joins the team adding his many years of knowledge and experience from working within Factory Team Arctic. It’s an understatement to say these two know the Arctic Cat product inside and out.

Two returning riders are the namesake of the Woodies team including, Kaden Woodie, who will pair up with Pro Lite teammate, Dylan Roes, but won’t be racing the full schedule. At the last race of the 2021 season, Kaden sustained an injury (rib separation and bruised lung) to which he has needed the extra time to heal. His focus will turn to spinning wrenches and supporting his sister, Taven, in the Pro-Am Women’s class.

Returning with a fire in her heart is Taven Woodie who has been a front-runner in the Women’s Pro-Am class. Last season, in Dubuque, IA, Taven sustained a knee injury, but battled to the end to make the podium during the final. The injury ended the rest of her season, but in the off-months, Woodie has undergone surgery and dedicated herself to a rigorous physical therapy and training to get back on track and take a shot at the Pro-Am Women’s championship title.