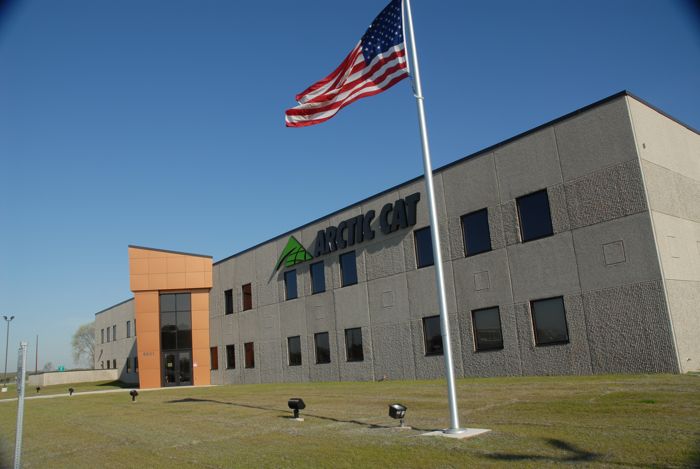 Summarized by a non-financial writer who barely made it through high school math classes: the company is still losing money as it faces tougher circumstances than originally forecast; the powersports market is still soft; there is still too much dealer inventory.

Here’s how Cat says it:

-Continued progress made on strategies to reposition company, including signing two strategic partnerships;

Christopher Metz, Arctic Cat’s president and chief executive officer, stated: “We expected that Arctic Cat’s second quarter would be challenging, as we continued to implement our turnaround strategies. However, we encountered a softer than anticipated powersports market in the quarter, with Arctic Cat’s and the overall industry’s sales down. We are disappointed in the company’s second-quarter results, which were impacted by lower sales volumes, unfavorable product mix and a heightened promotional environment.”

Commenting further, Metz said: “We made further progress on implementing our strategic growth initiatives in the fiscal 2017 second quarter. We recently signed two strategic partnerships – one during the fiscal 2017 second quarter and the other after quarter end – that we anticipate will contribute meaningfully to Arctic Cat’s future revenues in fiscal 2018 and beyond. We continue to expect reporting stronger financial results in the second half of this fiscal year, driven by planned new product launches and an improved product mix.”

Arctic Cat’s fiscal 2017 second quarter net sales were down 22.0 percent to $164.6 million versus $211.2 million in the prior-year quarter. Foreign currency exchange had minimal impact on net sales in the quarter.

Gross profit and gross profit margin in the 2017 second quarter were approximately $13.5 million and 8.2 percent, respectively, compared to approximately $43.9 million and 20.8 percent, respectively, in the prior-year quarter. Contributing to the year-over-year decrease in gross profit were: lower sales volumes; unfavorable product mix, primarily driven by an increase in lower margin snowmobile sales to our OEM partner; increased sales incentives as a result of a highly promotional retail environment; and unfavorable foreign currency exchange impact on engine purchases.

Operating expenses in the fiscal 2017 second quarter were approximately $32.6 million compared to $25.3 million in the year-ago quarter. The year-over-year increase was chiefly attributable to unfavorable impact from our foreign currency hedging activities of $3.9 million, a $2.2 million product liability settlement, and increased research and development costs associated with investments in new end-user focused products as part of our new product roadmap. Operating loss in the 2017 second quarter was $19.1 million versus an operating profit of $18.7 million in the same quarter last year.

Arctic Cat ended the 2017 second quarter with cash and cash equivalents totaling $9.2 million at September 30, 2016, compared to $10.7 million a year ago. The company expects to generate significant cash from operating activities in the second half of the fiscal year, as the company ships new products and reduces inventories. By the end of fiscal 2017, the company anticipates reducing inventory by up to $55 million and lowering long-term debt by $25 million to $50 million. The company continues to make investments in the business to lay the foundation for future growth and to improve efficiency.

For the six months ended September 30, 2016, Arctic Cat’s net loss was $23.3 million, or $1.79 per share, compared to net earnings of $10.1 million, or $0.77 per diluted share, in the prior-year period. Included in the net loss for the six-month period is a special item totaling $1.4 million after tax, or $0.10 per share, for a product liability settlement recorded in the fiscal 2017 second quarter. Year to date, the company’s net sales totaled $269.5 million versus $345.5 million in the year-ago first six months.

ATVs/ROVs – Sales of Arctic Cat’s all-terrain vehicles (ATVs) and recreational off-highway vehicles (ROVs) in the 2017 second quarter totaled $44.0 million, down 37.8 percent compared to prior-year sales of $70.8 million. Year-to-date sales totaled $87.8 million, down 29 percent from $123.6 million in the prior-year first half.

Metz stated: “Faced with a weak powersports market impacted by macroeconomic trends in the oil, gas and agricultural sectors, our sales in the second quarter and year to date are lower than we expected and our dealer inventory levels remain higher than we would like. Despite our challenges, we are committed to reducing dealer inventory to make room for our exciting and innovative new products slated to hit the market over the next 12 months. We are making tremendous progress on multiple new product initiatives and are pleased to begin delivering ROV models designed in partnership with Robby Gordon. We are on track to introduce three new ATV/ROV product waves this fiscal year. Two waves have been announced. We will unveil the third new product wave by late February at our dealer show.”

In early September of 2016, the company unveiled the second wave of its 2017 model year ATVs and ROVs, including new Wildcat™ X and Wildcat 4X models that feature an all-new RG™ PRO rear suspension, and a value-priced Alterra™ 300 ATV. The second wave is on top of the fiscal 2017 first quarter introduction of six all-new models, featuring the versatile and powerful HDX™ Crew six-passenger utility vehicle, the Prowler utility vehicle and the Alterra™ TRV® with 2-up passenger seating. Arctic Cat expects these exciting new products to drive topline and bottom line growth in the second half of fiscal 2017.

Snowmobiles – Snowmobile sales in the fiscal 2017 second quarter were down 12.9 percent to $95.7 million versus $109.9 million in the prior-year quarter, due to lower North American sales volumes of Arctic Cat products and an increase in incentives, partially offset by increased shipments to our OEM partner. Year-to-date snowmobile sales totaled $136.2 million, down 19 percent compared to $168.1 million in the year-ago period.

Parts, Garments & Accessories – Sales of parts, garments and accessories (PG&A) in the fiscal 2017 second quarter were down 18.3 percent to $24.9 million versus $30.5 million in the prior-year quarter. The decline is primarily attributable to a sluggish powersports market and lower pre-season sales of snow-related items, resulting from elevated dealer inventories as a result of poor snowfall in key geographies for the past two consecutive years. Year-to-date, PG&A sales totaled $45.5 million, down 15.4 percent from $53.8 million in the first half of fiscal 2016.

In November 2016, Arctic Cat signed a commitment letter to amend its senior secured revolving credit agreement. The amendment would extend the term of the agreement to November 2021 and permit borrowings up to $130 million year round. Arctic Cat expects the amendment to be finalized prior to December 1, 2016.

Commenting on the company’s outlook, Metz stated: “We continue to face ongoing challenges in fiscal 2017, with a soft and increasingly competitive powersports marketplace, and continued headwinds from foreign currency. We are positioning Arctic Cat to capitalize on tremendous growth opportunities through new product innovation and strategic partnerships. We are highly encouraged by our progress in these areas and we expect future contributions from each. As we invest to support our strategic initiatives, we are cutting costs and manufacturing output to improve free cash flow and earnings. We believe that our balanced approach, along with our new bank agreement, will enable us to realize Arctic Cat’s long-term growth potential.”

Added Metz: “We remain focused this fiscal year on rebuilding and repositioning the company for a return to long-term growth when macroeconomic conditions improve. We are confident in our long-term strategic plans to turn the business around.”