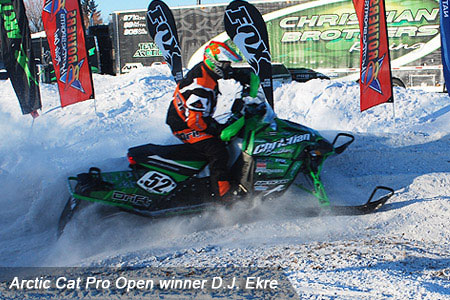 A winter storm blew into Grafton, ND, prior to the start of the United States Cross-Country (USCC) season opener, leaving a rough, cold and rugged cross-country race for those competitors who braved closed roads to get there. And with Arctic Cat’s unmatched support of all classes, Team Arctic racers won 12 classes – sweeping all top-3 podium positions in 11 of them – and sent a powerful reminder which brand will dominate for the rest of the season.

“Arctic Cat supports cross-country racing because our racers are passionate about it, our company learns from it and our customers benefit from it,” said Team Arctic Race Manager, Mike Kloety. “Despite a storm that literally shut down travel in this region of the country, Grafton saw nearly 200 entries. And Team Arctic dominated by winning 12 of 18 classes.”

D.J. Ekre, Ryan Simons and Brian Dick served notice about who were the fastest pros of the weekend when they swept the Pro Open class early in the day; however, in the Pro 600 class each suffered the fickle fate of cross-country’s classic drama. Dick went out with a tweaked suspension component, Ekre battled multiple goggle changes due to fogging and Simons went from a 10-second lead to a 14-second deficit following a last lap crash.

A similar fate befell Chad Kyllo, Ryan Greening and Cole Nymann in the Semi Pro 600 final. After sweeping the top-3 positions in the Improved class early in the day, the trio suffered slush and ice build-up under their sleds’ hoods, slowing their speed considerably and preventing a second Semi Pro class sweep for the day.

Despite these setbacks, Team Arctic proved their overall dominance from top-to-bottom. Aboard his Sno Pro 500, Bryce Buchanan led a top-10 sweep of the Expert 85 class and a top-six sweep of Expert 85 Improved. Underlining the dominance of the Sno Pro 500, C.J. VandePutte led a top-eight sweep of Sport 85, Luke Perreault led a top-seven sweep of Trail and Jay Lura capped the top-six-sweep of Junior 10-13.

The next race on the USCC circuit is Jan. 15 in Grand Forks, ND. Go to www.usccracing.com for more information.