Comparing an Arctic Cat F to and XF 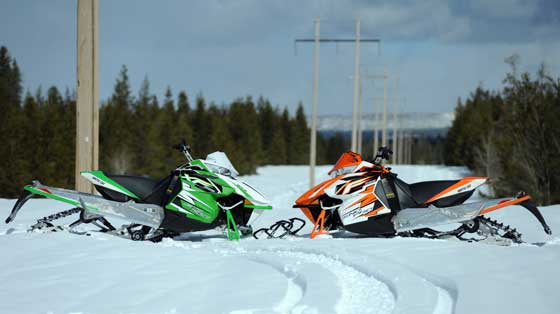 It’s a common question, one I debated myself for a few days before opting for the ’12 F1100.

So a few weeks ago, while riding and evaluating the 2013 model year Arctic Cats near West Yellowstone, I spent several days riding Fs and XFs with this very question in mind, in addition to spending an entire day comparing an F800 Sno Pro to an XF800 Sno Pro with my cohort, Kale Wainer.

Here’s what I learned: 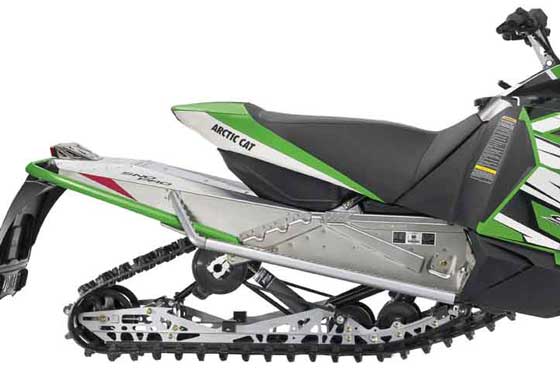 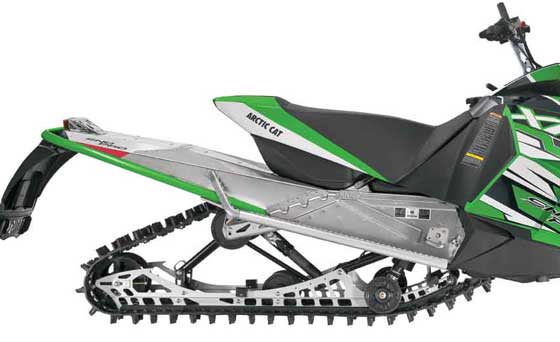 The most significant difference between the two machines occurs at the tail end, with the track length often getting most of the attention. The F (top) has the 129-in. Ripsaw track (now with a 2.86-in. pitch for 2013), while the XF (bottom) gets a 141-in. Cobra.

No doubt the track length contributes to the inherent strengths/weaknesses of both machines, but it’s not the only factor. 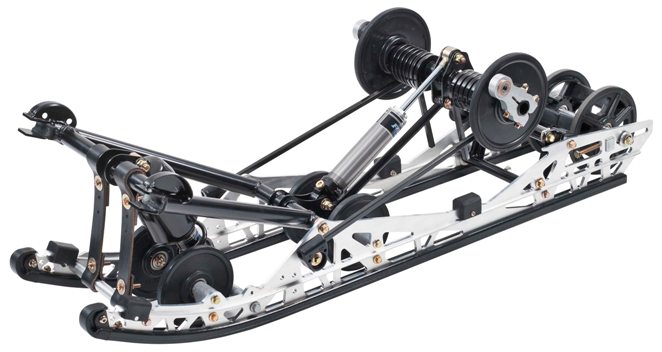 The skidframes are also significantly different. In the F (top), the skidframe utilizes rear coupling (which produces a significant difference in handling characterstics), the Slide-Action front arm and the Torque Sensing Link, none off which are used on the XF’s skidframe (bottom).

Instead of rear torsion springs, the XF skidframe uses either a coil-over unit on the rear arm (as pictured here) or a Fox Float 2. There are geometry and arm-length differences as well, all of which reflect the fact that the XF skid is adopted from the M’s rear suspension, which emphasises traction, weight transfer and drivability in deep snow, rather than hardpack handling and bumps.

There are other differences as well. On the 2012 models, the XFs were geared lower than the F models (this has changed for 2013, which I’ll report on in the coming days). And the XF gets the taller mountain handlebar. 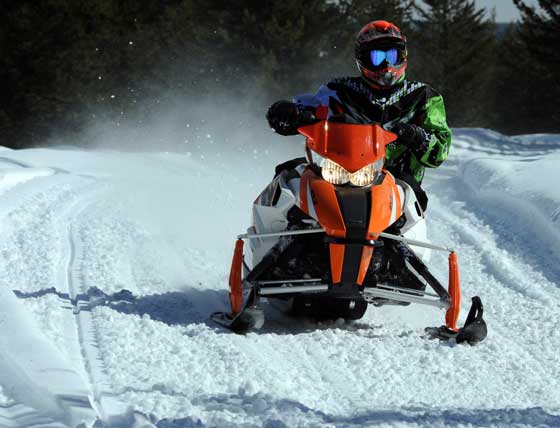 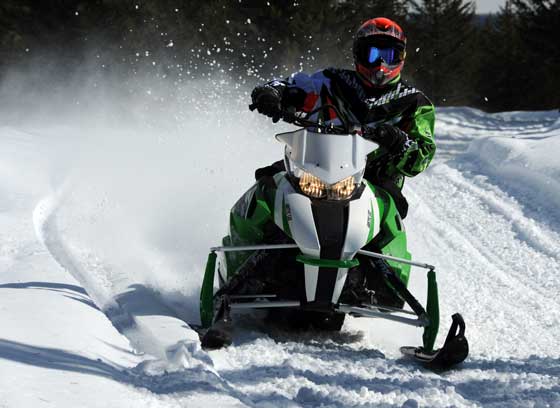 If like me, you’re predominantly a trail rider, cornering is where you’ll experience the biggest differences between the two machines. In short, the F turns sharper, with greater precision, whether it’s carving long sweepers or especially pivoting through tight 90-degree stuff.

The added track length of the XF is definitely noticable and, if you want to ride fast on hardpack, requires more rider input (hanging off, using the brake to reduce inside ski lift and/or break the track loose).

Likewise, when you get on the gas the non-coupled/non-Slide-Action XF skidframe definitely transfers weight off the skis compared to the coupled Slide-Action F skid. Do this exiting a corner, and it’s another factor why the F keeps its skis planted and carving while the XF gets light in the front while conversely losing ski bite.

I think the F feels better in the bumps, whether it’s trail chop or Bobby Flame-like-ditch-banging. There’s a theory that says a longer track “bridges” trail chop better than short tracks, but I’ve never been able to detect it. For me, the F skid seems to feel more comfortable than the XF over a wider range of bumps/chop.

It’s definitely easier for me to control the sled’s attitude (the height of the front end in relationship to the back end) when launching off jumps like you would do on ditch approaches. When I jump the XF, I’m doing lots of tail landings instead of flat landings. As a result, for me there’s more fun-factor with the F.

Is the XF bad in the corners? No way. The same is true for riding in the bumps. 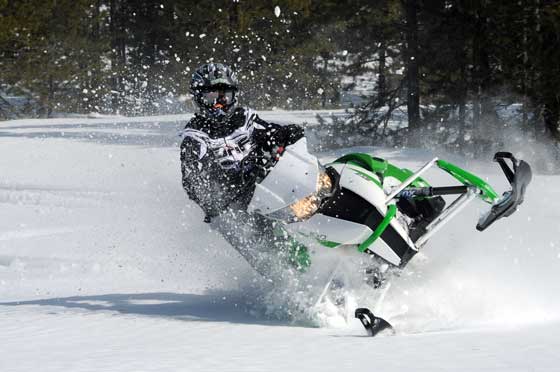 Conversely… all those differences in skidframe and track length definitely play to the XF’s favor when you’re riding off-trail. Of course the XF goes through deep snow better.

In fact, the Sno Pro XF with the 141 x 1.5-in. lug Cobra track goes through the deep snow so well, it’s an excellent mountain sled for A LOT of part-time mountain riders. I’ve been a once-a-year mountain rider for the past 22 years, and when I get to pick a track length, I’m looking for something in the 144-in. range (like the recent Arctic Cat High Country) rather than the really long stuff. Heck, rather than even the 153-in. tracks. 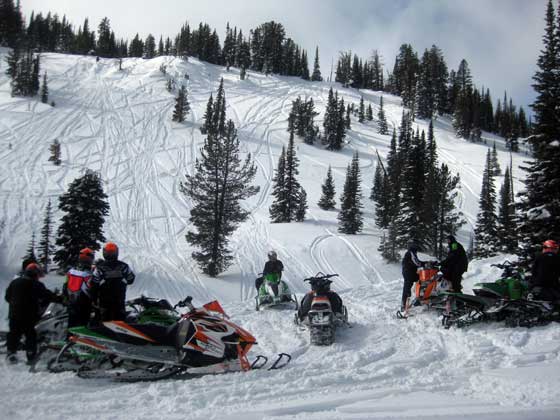 I find a 141 or 144 is easier to maneuver and lay over, which not only makes it more fun in the trees, it just plain gives me more confidence when riding.

So, I’m a fan of the XF in the mountains, as it’s just as capable as I am.

I think it’s also worth mentioning that you can ride an F in the deep snow too, as the photo above illustrates. The shot was captured on a ride we did to a cool place called Elk Lake Lodge, to which we boondocked from Island Park riding a mostly M and XF machines, yet with a couple F800s thrown in for good measure.

Here’s the thing: I went almost everywhere the mountain sleds went. Granted, I had to ride with my head and frequenly use existing tracks during challenging situations, but I also did plenty of playing in the powder. So if you think that you can’t ride an F in the deep stuff, I’m here to say otherwise. And for the off-trail stuff I so in the midwest, an F800 works just fine.

For the kind of riding that I primarily do — 90% trail with 10% midwestern back-country — the F is absolutely the better option. I’d still opt for an F if the percentage was 70/30, without a doubt. After that, it gets trickier.

If half my riding were midwestern boondocking, I’d have a dilemma. Because I also own a Sno Pro 500, I’d probably opt for the XF.

If I spent a week in the mountains every year and I wanted to ride my own sled (instead of renting), I’d have an XF800.

Here are a couple random thoughts:

-For people who ride 2-up with a kid who’s in front of you, the XF mountain bars offer the sweet grab bar for the kid.

-If I were looking for a crossover and I knew that deep-snow riding was a significant percentage of my ride time, I would opt for the 800 instead of the 4-stroke options, simply because the weight difference makes the 800 a more playful sled in powder.

That’s all I’ve got… thanks for reading.

And if you have specific questions, fire away and I’ll answer.