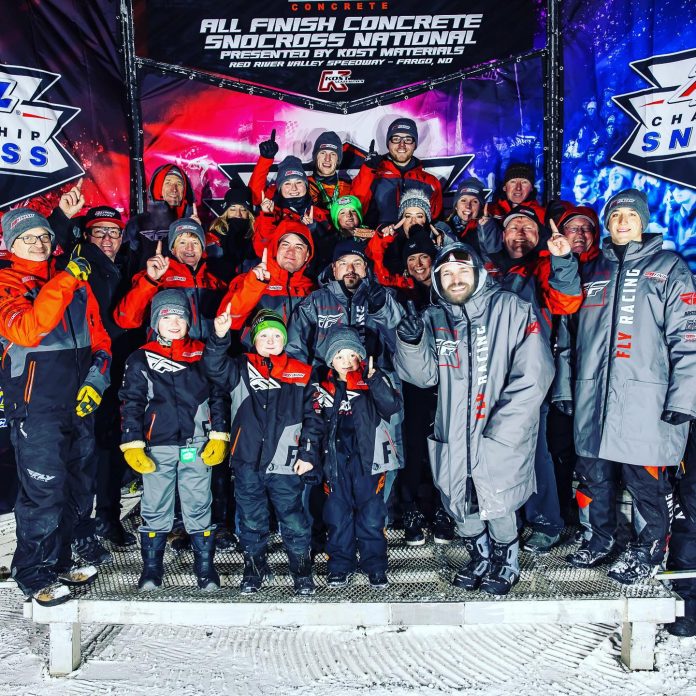 Mix some sugary snow, minus seven air temperature and ice edges with 15 of the fastest men on a snowmobile and you can expect a little bit of chaos. When you add in the factor that the current points leader, Elias Ishoel, had to start in the back row after a tough day of qualifying, all bets were off for a moment of sanity in Friday night’s final.

Daniel Benham made the move back to Arctic Cat this season, teaming up with a new team and sponsor that also happens to be located just down the road from the Fargo racetrack and is also the weekends title sponsor. Just to add to the pressure, Benham also had to deal with a motivated Ishoel in the final.

Benham used a powerhouse move to gain the hole shot and the early lead, and the entire field game through turn one clean, with everyone looking to find a place at the front of the pack. Hunter Patenaude was able to sneak behind Benham, with Francis Pelletier and Emil Harr in tow.

But Benham was on another plane early on, leading the field and keeping the other contenders trying to find some visibility through the growing snow dust. With Patenaude in second, Pelletier and Harr diced back and forth for a few laps for third. But out of nowhere came the three-time defending champ, Ishoel.

Ishoel had to start in the back row because he missed tech after winning his first heat, and then crashed in his second heat. But just two minutes into the final. Ishoel was in fifth. Two minutes later he was sprinting past both Harr and then Pelletier.

With the running order of Benham, Patenaude and now Ishoel, shades of Tucker Hibbert’s come-from-behind win at Deadwood a few years back were starting to trickle in. Ishoel found another gear to get around Patenaude and started reeling in Benham. As the clock ticked down to zero, the gap was down to 1.9 seconds and Benham could hear Ishoel screaming toward him. But on the final two laps after time ran out, Benham found another gear as Ishoel slowed, and the hometown hero cranked his lead back up to an impressive seven seconds by the time the final checkered flag of the day was flown for the field.

“This is an amazing moment,” said Benham. “With a whole new team, we’ve been through a lot so far and already there’s been so many question marks. But the team has never given up and it’s just so rewarding for it to pay off.”