Engine Speculation: What Does “Some” Mean? 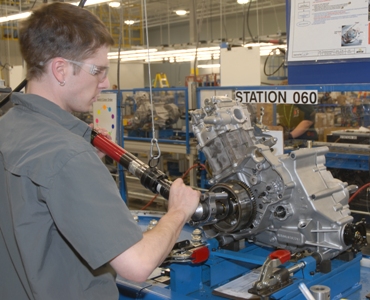 I was listening to the Q1 2011 Arctic Cat Earnings Conference Call HERE, and at 7:20 during Question & Answer portion with analysts, someone asks Arctic Cat CEO Chris Twomey to clarify what the situation is with transitioning away from Suzuki as a snowmobile engine supplier.

Twomey starts by discussing why Arctic Cat first built the St. Cloud Engine Plant (answer: “strategic reasons,” which sounds like Cat and Suzuki had differing opinions on what ATV customers wanted for engines), then he talks about the plant as state-of-the-art four-stroke engine facility.

Then we hear the following exchange between Twomey and a stock analyst:

Twomey: We just felt now ready on the snow side to look at doing some of our own two stroke engines and so we’ve worked out a transition plan with Suzuki to continue to buy through the 2014 model year and then begin making our own in St. Cloud at that time.

Analyst: So you’re talking about across-the-board the full line-up of snowmobile side, transition fully away, because the press release was not very specific on that?

Twomey: We will transition fully away from Suzuki in the 2014 model year and we will make some of our own engines in St. Cloud in that year.”

Analyst: There will be other engines outsourced elsewhere?

Twomey: (There) could be, yes.

To me, the most interesting piece is this: “…and we will make some of our own engines in St. Cloud in that year.”

He doesn’t say, “We will make our own engines in St. Cloud,” rather, he inserts the word “some.”

It was the same word choice that stuck out to me when they first announced the transition-away-from-Suzuki situation.

Obviously Arctic Cat isn’t about to talk specifics here. But it sure sounds intriguing. And it gets my speculative juices flowing.

If, when Arctic Cat transitions FULLY away from Suzuki and begin making SOME of their own engines in St. Cloud, WHO might you guess will provide additional snowmobile engines?

How about Kymco, who already supplies some of the Arctic Cat ATV engines?

Maybe a domestic engine supplier who can offer both clean 2-stroke technology and 4-stroke expertise, such as Mercury Marine? They build some truly excellent engines.

A handful of years ago the company announced a partnership/relationship with Aprilia. I haven’t heard anything about that situation for a couple years, but maybe there’s something brewing? No 2-strokes though.

Perhaps they’ll tap into the technology brought to market by Redline snowmobiles?

Maybe there’s a wholly different possible supplier, or maybe Arctic Cat is playing coy and is planning to build all of their snowmobile engines in-house?

If Arctic Cat continues to work with Suzuki through the 2014 model year, and if there’s going to be an additional supplier, this new source will come on board for the 2015 model year, if not before. Which means we’ll know WHO in 3 1/2 years, if not sooner.

Any thoughts and/or ideas?