Flipped: My Mind Switched to Winter this Weekend

After the last of the rideable snow melts away during the increasing warmth of springtime, a switch gets flipped in my head. I stop planning snowmobile trips and start thinking about bike rides.

On some 60-degree weekend, usually in April, I’ll prep the snowmobiles for summer storage. The fuel gets stabilized; all the gear in the seat bag gets removed and put in the shop; and the sleds are thoroughly washed before being loaded onto the trailer. A few days later, I make the bi-annual trip to my storage guy, swapping the snowmobile trailer with our pop-up camper.

For the next 5-6 months, the switch in my head is firmly on summer mode: mountain biking, camping, ATV riding, and mowing the lawn. It’s only the last one of those activities that I truly do not enjoy.

Of course I occasionallythink about winter and snowmobiling during this timeframe, but it’s more of a casual, wistful look back at what happened during past winters rather than an all-consuming look forward to what’s ahead.

But it is only a matter of time before the switch flips again into winter mode. The mechanism that flips that switch varies with each passing year and the evolution of my life.

Some years it’s a day spent at a late-summer swap meet like Princeton or Hay Days that trips the switch. Other years it’s the sight of combines harvesting the fields near our home, the autumnal scent of burning leaves or the gradual degradation of faces on carved pumpkins during the week after Halloween.

Over the years I can remember the switch flipping on the first frost of fall; the ritual hanging of deer hunting clothes outside prior to opener; and even because of a snowmobile magazine arriving in the mail.

It’s happened as early as August and as late as December. Sometimes the switch has flipped instantly and other times it’s a gradual move.

This past weekend, while enjoying a long weekend near Ironwood, Michigan, with family and friends, my switch finally, firmly flipped. It occurred when I awoke early Saturday morning to a fresh blanket of snow covering the ground.

Winter! I’m not kidding; I literally felt the flip of the switch.

At the sight of this unexpected gift, my wife and I donned our jackets, hats, boots and gloves and went for a nice walk in the woods, eschewing our normal routine of ALWAYS drinking coffee before engaging our brains and bodies. Later, I went back outside for a bike ride on the trails surrounding the ski resort near where we were staying, enjoying every slip, chill and rush of cold against my face.

No, these aren’t my favorite tracks to make in the snow. And the orange leaves on the maple trees were a reminder that this snow wouldn’t last, but my mind is now officially in snowmobile mode, where it will remain for the next 5-6 months. And I couldn’t be happier!

My question to you: What flips your switch into winter mode? Is it a gradual flip or is it instantaneous? Has it already occurred for this season?

Let me know. And thanks for reading! 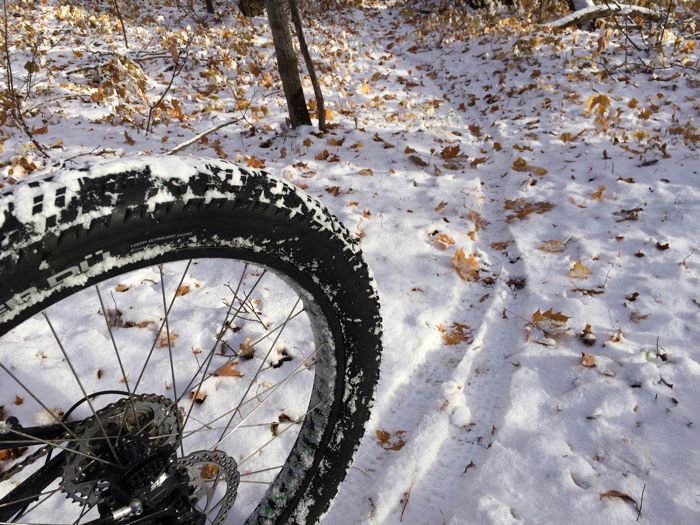