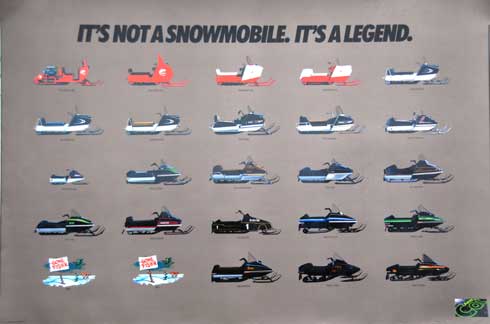 The original “Gone Fishin’ poster was created in 1986, and quickly became a collector’s item.

I’ve been thinking a lot about the history of Arctic Cat these past few months. Everything from what it must have been like for Edgar to launch the company, to the euphoria of building 72,000 Panthers in a single year, to the bankruptcy of Arctic Enterprises and the stunning rebirth of the brand.

When I first started working with Arctic Cat in the early 1990s, nearly all of the people there had worked at Arctic Enterprises when it closed the doors in 1981. And although a decade had passed since that massively-disappointing demise of AE – during which there had been 10 years of incredible growth in the reborn-Arctco – there was still an open wound on the psyche of many at Cat. The failure of Arctic Enterprises was still pretty raw.

I remember too that by the mid-‘90s, there was a concerted effort on the part of some at Cat to NOT publicly mention that Arctic Enterprises had “Gone Fish’n” as the poster from 1986 had called the two model years of 1982-83. The reason to stay mum on the subject was that Arctco, as a publicly-traded company, might suffer in the market if there was a constant reminder that the Arctic Cat brand had once gone fishing.

Adding to the frustration and concern was the fact that, beginning in the late 1980s through the late ‘90s, there were annual rumors that Arctic Cat was once again on the verge of bankruptcy. These rumors were always traced back to people who worked 60 miles north of Thief River Falls, but they were a PR thorn nonetheless.

I’ve never agreed with the theory that Arctic Cat should hide the gone fish’n years.

In fact, those years and the subsequent rebirth of the company have fundamentally shaped the company to this very day, almost entirely in ways that have benefited the company and its riders.

I believe the lessons of having gone fish’n created a culture of pull-up-the-bootstraps-and-get-it-done at the company. I believe Arctic Cat people try harder, because they know very well the consequences of coasting.

There’s a scrappiness, even a slight chip-on-the-shoulder mentality of many Arctic Cat people that translates into a powerful work ethic.

When people literally invest their homes and life-savings to launch a company, they are more than simply “invested” in the outcome. They’re inextricably tied to it. It’s not just their job, it’s the fulcrum on which their lives – and the lives of their families – balance.

As people, I think we’re defined far more by how we react to setback than how well we celebrate success. The reaction to bankruptcy by Arctic Cat people was nothing short of extraordinary.

Did the gone fish’n years do some harm to the company, even now? Maybe.

Perhaps fear occasionally crept into the leadership at critical moments, preventing an entrepreneurial decision from being made that might have fueled greater growth.

Perhaps there were investments that, had they been made earlier, would have put Arctic Cat into a greater leadership role than it currently enjoys. Hard to know these kinds of things.

But I do know that when I look at the accomplishments of the past 30 years of a company that’s much smaller and with fewer resources than its competition, I see why it is I’m so drawn to the people who build the machines, and to those of us who ride them. They – and we – try harder.

It’s a story that repeats itself on the race track every winter, when Polaris and Ski-Doo clearly outspend Arctic Cat (by a factor of two or three) on racers and teams, yet still don’t match the win record.

And it explains why 10,000 people, mostly snowmobilers, traveled to TRF the last weekend of July to see/talk/live/celebrate Arctic Cat.

Arctic Cat created a new, updated version of the Gone Fish’n poster for the 50th Anniversary, where they were free for the taking. Likewise, when it came to creating the new 50th book and DVD, there was no shying away from those two, tough years.

I like that, and think that acknowledging the past is a good thing.

I guess I’m glad that Arctic Cat went fishing for a couple years, because it ultimately led them to where we are today. 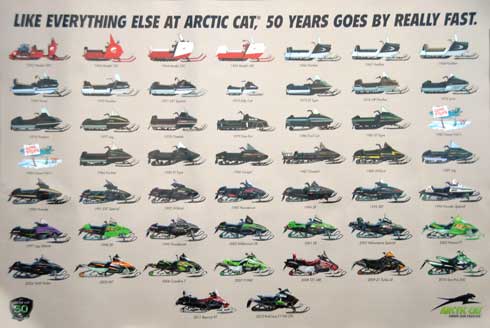 The new “Gone Fish’n” poster was given away by Arctic Cat at the 50th Anniversary.