Happy Birthday C.J. (and, as always, thanks for your amazing writing)!

C.J. was an outstanding writer because of his ability to capture the essence of whatever he was writing about.

This column from the Jan./Feb. 1982 issue of Snowmobile Magazine is a prime example, in which he describes a tribute to Edgar Hetteen, the so-called Grandfather of Snowmobiling.

It’s an especially timely column because of the recent passing of David Johnson, Edgar’s brother-in-law, who plays and important role in the story.

And thanks for all you gave the sport of snowmobiling. 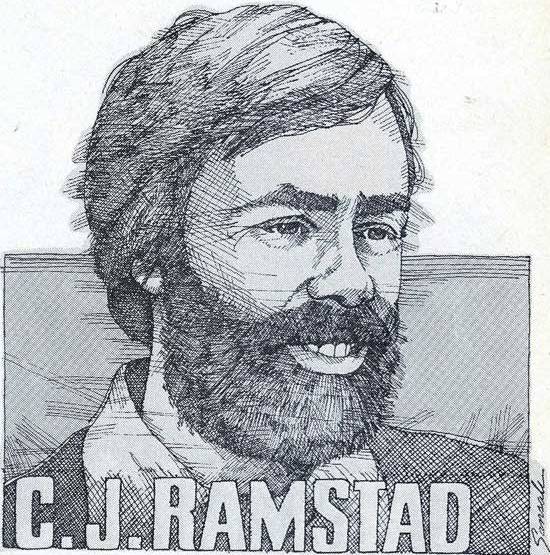 That night we used ol’ Edgar for traction

It’s tough to be a legend.

And it can be especially tough when the legend in question is one of those Blue Ox type fables that make the legendee larger-than-life by a factor of ten. When you step into a room, you know the legend has arrived already. You hear someone say under their breath: “That is the legendary ______?”

It can be tough.

There are few in snowmobiling, or in the world for that matter, who know the difficulty of living a legend better than the founder of Polaris and Arctic Cat, Edgar Hetteen, aka “The Grandfather of Snowmobiling.”

We recently had the privilege and honor of being guests at a dinner and “roast” held for Edgar and his wife, Hannah, in Minneapolis. Mor than a hundred of the Hetteens’ friends, acquaintances, business associates and old time co-adventurers jumped at the chance to work the old legend over the coals in the backhanded tribute that followed dinner—the long-awaited Edgar and Hannah Hetteen Roast.

If Edgar thought living the legend was difficult, his canoe had not seen the water-falls yet. Because the roasters had their grip on the kind of material that stand-up comedians dream of. Here was a good old legend, trapped in the banquet hall, waiting to be skewered.

First we found out about Edgar’s drinking habits. We would have to assume the Grandfather of us all would like a nip now and then. Maybe schnapps. Not so, according to one roaster. Seems Edgar has a legendary way to “test” his internal anti-freeze additives. He simply pours some of the cheapest, meanest stuff he can get on the front of his Cat. If the fiberglass softens, he’ll pass the bottle around. This technique was not born of good taste obviously, but there’s more to it. Seems Edgar has never been known to buy the stuff himself. “I’ll never visit a liquor store alone,” Edgar once told a friend, “because there wouldn’t be anyone to buy.”

Then we heard the story about how Edgar talked his brother-in-law into “investing” in Hetteen Hoist and Derrick, forerunner of Polaris Industries. Seems the poor fellow sent money home from the Navy.

“I didn’t realize I was sending money back to Roseau to keep the Municipal open,” said David Johnson, the brother-in-law.

But the big revelation from Johnson was not the misappropriated Navy pay. Seems our Grandfather never really did invent the snowmobile. Johnson did.

“Edgar never got out of the truck in those days,” according to Johnson. “He just sat in the cab until a newspaper reporter showed up. Then he would take his seat on our sled and smile real perty.”

The facts were staring to come out. We learned that Edgar had become the Grandfather of Snowmobiling in a meeting in Minneapolis. The Arctic Cat ad agency was searching for something to put the early Cats over with the public.

“We need something big,” ad agency President Lee Lynch was heard to exclaim, “something really big.”

A young whipper snapper piped up, “Let’s sa the Cats were invented by someone from Tough Rubber Balls, Minnesota…we’ll call him the Grandfather of Snowmobiling!” In those days you could have any color Arctic Cat you wanted as long as it was black. Kinda made the Grandfather idea sound pretty good.

What actually happened friends, and we’ve waited yea these many years to learn the truth, was the advertising guys looked through all the old photos to find some documentation for the “Grandfather bit” as it came to be known. And ther, in amongst the piles of photos of red Arctics returned to the factory for warranty, the pictures of rusting Tom Cat prototypes that never went one inch in real snow, the old footage of a dog licking honey off his nose that had sales copy about Arctic Cat dubbed-over in someone’s misguided idea of a clever TV ad, were dozens of photos of  “Fast Eddie,” the Arctic Cat handyman. Old Fast, as he was known, was in all the photos because he was always handy when the cameras came out.

Armed with this pile of “documentation,” the ad types began manufacturing the Grandfather of Snowmobiling. Today, people actually believe that stuff about a daring trip in Alaska, inventing the snowmobile in Roseau, building Arctic Cat from a three-cow milking operation to the darling of the industry. Fast Eddie Hetteen was just the kind of ham who could pull it off, we learned.

Finally, Edgar himself hot a chance to speak. Would he try to defend himself? Would he say he really did invent the snowmobile and drive them across Alaska? The crow held their breath.

No, Edgar didn’t protest. The roast had been great fun and the funny half-truths and out-and-out lies kept us all entertained for hours. But Edgar wanted to be serious for just a moment. With apologies to long-suffering Hannah, who endured the long days, weeks and yes, even months when Edgar was on the road promoting snowmobiling, Edgar said he would do it all over again.

Edgar Hetteen might now have been the Grandfather of Snowmobiling when we met him in the 60s. But his “obsession” and his successes did indeed create a legend. It’s a legend that will live on, too, because the name Hetteen and the fun of snowmobiling will always be one. Thanks, Gramps. 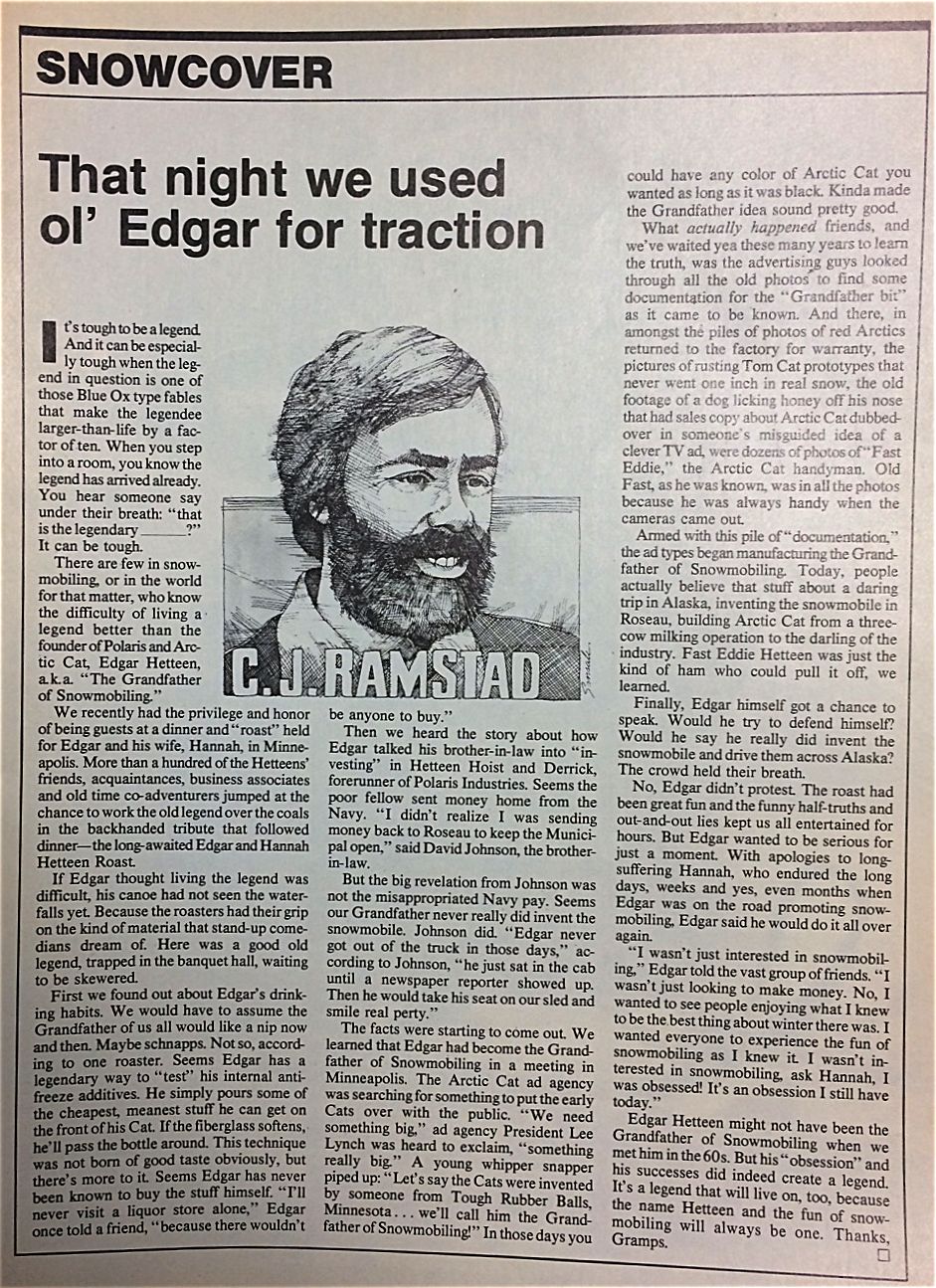