The 2018 edition of Sno Baron’s Hay Days extravaganza came in like a ’03 Firecat and left like a 9000 turbo. And somewhere in the midst of the high speed whirlwind of horsepower, thousands of snowmobilers paused long enough to soak in a just a bit of the sport’s biggest, loudest, rockingest, stinkiest, drinkingest, coolest, craziest and mostest event.

…and they for sure came to the Arctic Cat booth. Where in addition to every 2019 snowmobile and some 2019 dirt products, fans of the brand talked with engineers, racers, company personnel and some guy dressed in a clown suit.

I grabbed this shot before the gates opened on Saturday. Here and at the Epping, NH, show, Tucker Hibbert will be at the Arctic Cat booth with some of his historic sleds. It’s a chance to say hello, goodbye, thanks and anything else you want to express to the sports biggest star as he leaves the snocross racing world behind to begin new life adventures in white-New-Balance-shoe-propelled retirement.

Of course, there were other famous Cat race sleds in the booth, like the 50th Anniversary Soo 500 winning ripper of Zach Herfindahl’s and Wes Selby’s.

Eternal Sunshine came to Hay Days this year and got her photo taken with the legend, Roger Skime.

Lots of people got the photo taken with Tucker.

The all-new ZR 6000R SX snocrosser (which clearly inspired the other brands’ race sleds for this coming season…LOL), the ZR 6000R XC cross-country burner, and the…

If I had a dollar for every time someone leaned over one of the ALPHA sleds in the booth at Hay Days, I’d be the Alpha-Male bank deposits.

After the unveilings, fans were treated to the new video edit Destination Elevation featuring the Black Cats riding through some of the coolest terrain in North America.

Many Team Green racers were chatting, signing posters and otherwise plotting to take the podium for the upcoming race season.

This guy didn’t get in on the autograph session, but he was sporting this year’s Team Arctic race gear (the same stuff the racers will wear as they tear it up on the track this winter).

My favorite part of Hay Days is hanging at the Cat booth and talking with other riders. Steve and Emily LePinnet came to Hay Days from Cortland, New York. It was their first-ever Hay Days experience, and they were pumped! So cool.

Ditto for Robert Palmer (L), another easterner who came to Hay Days for the first time and was gracious enough to have his pic taken with Mr. Stinksalot.

Outside of the Cat booth, there was major traffic and commerce happening. Country Cat’s footprint continues to grow, and they make Hay Days their ground zero of deals and displays.

Check out this sweet Model 101 at the Thomas Sno Sports booth.

Sledders can get SCREAMING deals at Hay Days, where cash is king.

The FOX booth is another happening spot at Hay Days, helped in part by the sweet assortment of cool product and sweet sleds on display, including the new ALPHA ONE.

Lot’s of cool cats hanging at the FOX tent, including Rocky Mountain Rob Kincaid (black jacket) and other western rippers.

Outside of the business vending area, the swap meet still holds the greatest intrigue and “holy-crapeth” opportunities for those who are willing to walk a few rows.

Yes, there are party bus options complete with swirly slides (and mattress protection). 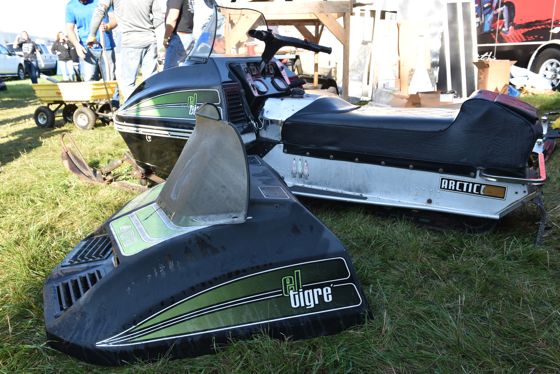 But there’s also the widest range of sleds you’ll find anywhere on the planet. And if you’re an Arctic Cat fan, the options are nearly limitless.

And still one of (if not the) quickest lake rocket ever made: an ’03 F7 Firecat.

You will even find a Polaris Cutlass SS with a Yamaha Nytro front end, a motorcycle seat and an answer to the question nobody thought to ask.

On the other hand, this modified Phazer looked like fun. #pastels

Pat “Credibility” Bourgeois looked like he was gonna get all Tony Hawk with the sweet board.

The custom crowd looked like they had a few beers prior to building this 3-wheeler.

And anyone who wanted a bike, vine wrap and water dispenser were completely satisfied.

The swap is the swap, and it’s what makes Hay Days such a trip.

The Cash Performance team raged through the mud races, taking wins and trophies aboard their Cat/Textron wheelers and side-by-sides.

It was another slaughterfest by Team Arctic at the grass drag portion of the event, with Team Green winning three of four Stock classes and taking wins in the crazy-mod/fast Outlaw and Lakeracer classes.

So all that is what happened in the first three minutes of Hay Days 2018. Want to know what goes on the rest of the weekend? Show up next year and find out.

Thanks for reading, see you there next year.