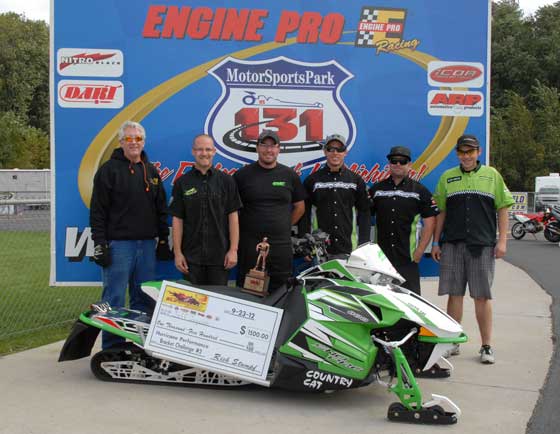 Jaquish is an accomplished asphalt racer with multiple titles and victories to his name, going back to the 1997 season.

Here’s what he had to say about the win and his Arctic Cat F800 race sled:

On the asphalt we mostly race in the bracket class. This type of racing comes down to having a machine that is very consistent and a driver who is equally consistent.

My sled is a 2013 Arctic Cat F800 ProCross. I got the sled through the Team Arctic race program in late August and had it on the track for the first time on Labor Day. The sled is all stock except for clutching and fuel/timing programming.

The F800 is a great machine for asphalt racing. The engine is rock solid (I’ve been running the 800 HO since its debut in 2010 and havent had a single problem with it). This sled flat out is a rocket out of the gate! I’ve seen 660′ speeds of 109 mph. My goal is to run 9.90’s at 126 mph in a quarter-mile with the sled being stock except for clutching and fuel changes.

This past Sunday it was running consistent 10.30-second runs at 120mph in the quarter mile, going straight into a strong headwind.

The win was my fourth of the season. We couldn’t have done it without the huge help of our sponsors: