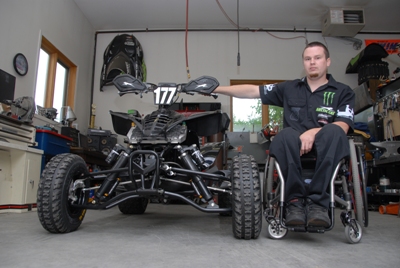 Take one part expert racer who knows firsthand what makes a great race-bike. Mix in equal parts creativity and fabrication excellence. And what you get is Jeff Tweet’s wicked, custom race quad. 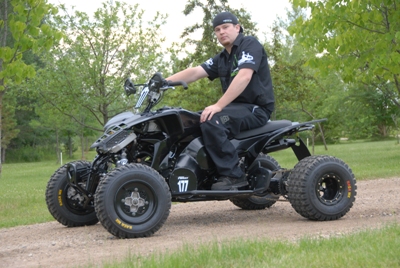 Tweet is dyno technician at Arctic Cat, and responsible for helping develop engine management/calibration maps for the 800 H.O. 2-stroke laydown engine that powers the F8, M8, Crossfire 800 and CFR 800 snowmobiles. He’s also the son of Ole Tweet, former VP of New Product Development and Marketing at Arctic Cat. And he’s a Team Arctic racer, having finished fourth place in the Adaptive Snocross class at the recent ESPN Winter X Games in Aspen, Colo., on the Monster Energy sled sponsored by his good friend, Tucker Hibbert.

Tweet was in the adaptive snocross event as the result of a partially-paralyzing (he has some feeling and limited use of his upper legs) injury from a snocross race in 2001.

While that event changed his life, it didn’t exactly slow him down, the evidence of which is his X Games appearance and years of ATV racing.

In fact, it’s his focus on ATV racing that inspired the custom creation shown here. 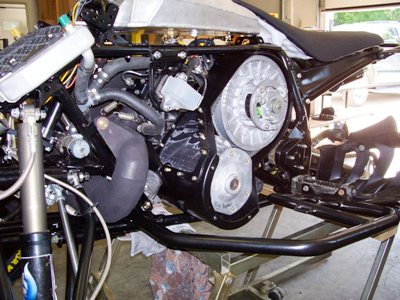 While this machine started life as a YFZ450, it’s anything but stock race ATV. For starters, the engine started as a ZR900 EFI twin, but was essentially cut in half by Tweet to create a single-cylinder 450cc mill.

Tweet did much the fabrication himself, including building the tuned pipe; and performing a mild port job. The people in Special Services at Arctic Cat pressed the crank together, which was then sent to a former colleague for rebalancing.

“I wanted a powerful engine with batteryless EFI,” says Tweet. “Because of the chassis design, I opted for a stand-up engine rather than a laydown style.”

While it’s currently running stock EFI calibration, Tweet has plans to tweak the system to compensate for the pipe and porting, as well as the single-cylinder architecture. When complete, he estimates it will produce around 90 hp on pump gas. 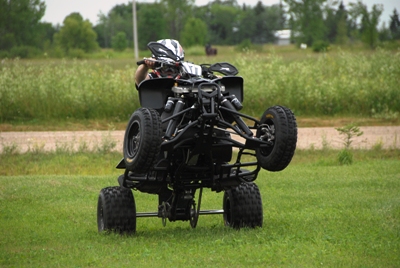 The chassis needed lengthening in order to accommodate the larger engine. Tweet stretched it a full five inches, three of which occurred at the swingarm and the remaining two inches in the frame itself.

A custom aluminum fuel tank hides underneath the Maier plastic. 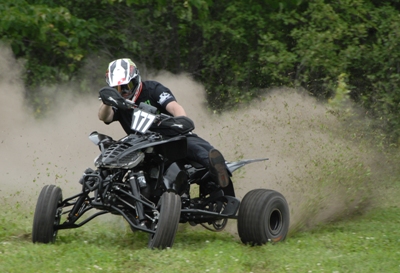 Of course the most comprehensive custom work was reserved for the engine and drive system, and the countless hours spent fabricating the chassis to contain them.

Tweet had just recently finished putting together the bike when I visited him at his shop in Thief River Falls. After I shot a few pix of Tweet and his bike, he donned his helmet and proceeded to rip up and down a nearby grass strip to illustrate just how much this thing rips!

More calibration is needed before Tweet will hit the local race circuit, but he plans to be chasing the checkered flag as early as next month, and hopes the practice will be a solid foundation for another run at the upcoming winter X Games. 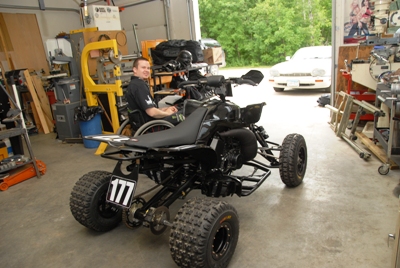