Arctic Cat unveiled three new 2019 snowmobiles at Hay Days this past weekend, one of which is the M6000 ALPHA ONE, which features the stunning single-beam rear suspension and track system that has pretty much revolutionized backcountry riding since it’s debut last spring.

It’s little surprise that Cat will equip an M6000 with the new ALPHA ONE system, complementing the M8000 version. In presenting the newest machine at Hay Days on Saturday, Arctic Cat reiterated that it’s aimed at riders who are looking to learn and hone their backcountry skills.

I’ve spent a lot of time on the M6000 over the past couple years, riding with others who are aboard 8000s, and I’m always smiling. The truth is, it’s an engine that does just fine at elevation and in the trees, thank-you-very-much. With the easy-to-layover ALPHA system, it truly makes for an awesome machine for riders who aren’t pro-level.

See below for the whole scoop.

• ALPHA ONE revolutionizes rear suspension and track design by using a patented single beam positioned in the middle of a specially designed lightweight Power Claw track. Unlike a traditional two-rail system, ALPHA ONE’s single beam allows the track to significantly flex and conform to the snow, delivering a new level of maneuverability with less rider input; substantially easier side-hilling; and increased traction and deep snow performance.

• New handlebar-mounted controls are easier to use while riding, with improved ergonomics, and transmit visible information on the digital instrument gauge.

The newest M Series snowmobile is based on the award-winning Ascender platform and narrow-profile bodywork. The lightweight and durable platform featuring narrow running boards, forward foot position and a low driveshaft provides the foundation for its deep snow carving excellence and intuitive rider ergonomics.

It’s matched by the lightweight Arctic Mountain Suspension (AMS) with mountain-specific spindles, geometry and 35.5-37.5-in. stance for improved sidehilling, reduced drag in the snow and optimal handling both on and off-trail.

Yet it’s the revolutionary new ALPHA ONE rear suspension and track system that resets the M 6000 as the benchmark for easy handling and maneuverability. The system consists of a lightweight and rigid single rear suspension beam constructed from extruded aluminum and magnesium. It runs in the middle of a specially-designed next-generation, lightweight 154-inch Power Claw track featuring a single row of track windows, a deep snow-specific design with 3-in. paddles and a 3.5-in. pitch, plus unique internal construction.

The result is a track that bends and conforms to the snow, whether the sled is on a side hill, flat surface or climbing in deep powder. With maximum side flex, riders can easily maneuver the ALPHA ONE Mountain Cat to a degree not possible with conventional snowmobiles, carving circles well inside the tightest turns that other machines aren’t capable of. The suspension is light and stiff, allowing the new track to flex and conform to the snow and riding surface. And it still rides down a groomed trail like traditional mountain sleds.

A full 11 lbs. lighter than traditional designs and all but free of trapped snow while being ridden, ALPHA ONE sets a new benchmark in lightweight mountain performance and maneuverability. Other new-for-2019 features include the G2

Like all 2019 M Series machines, it features new, premium handlebar-mounted controls that are optimized for use while riding, with improved ergonomics, and that transmit visible information on the digital instrument gauge. It includes a new magnetic tether switch to complement the key ignition as well as a new handlebar wiring cover covering that improves cockpit aesthetics. 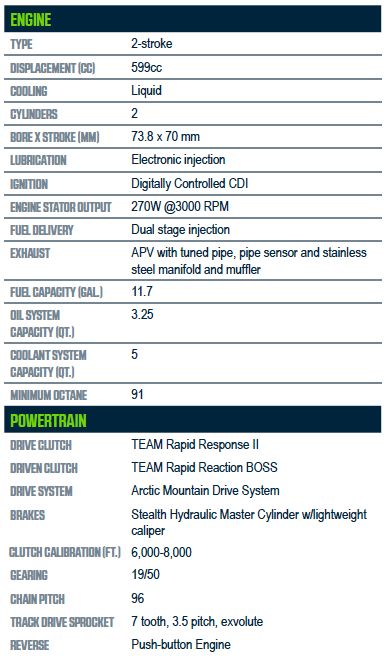 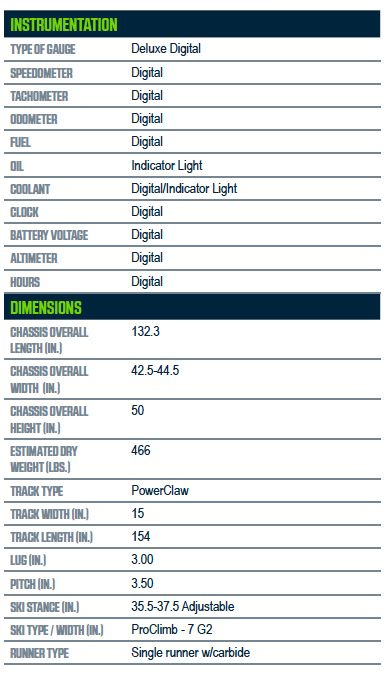 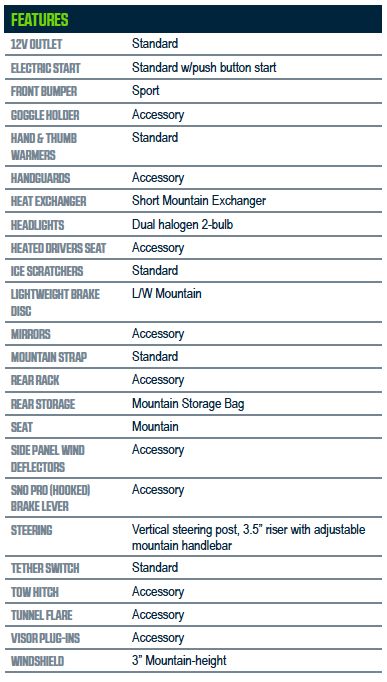