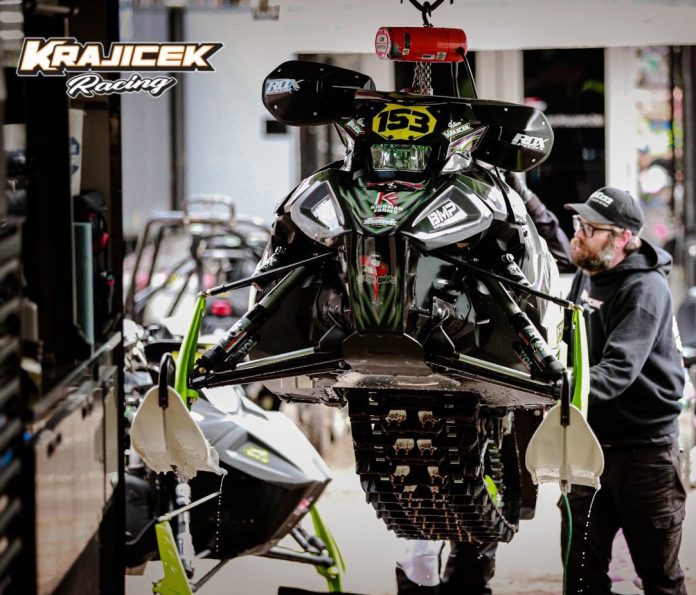 The Krajicek Racing team is taking shape for the upcoming 2022-2023 snocross season. Their team success is contributed to a dynamic focusing on a family environment mixed with professionalism, competitiveness, and of course, the love for racing Arctic Cat snowmobiles. Krajicek is still working on finalizing their sponsorships for the season, but are ready, and excited, to announce their rider line-up.

Domenic only has two years under his belt racing snowmobiles, but his upbringing in motocross has elevated his impressive snowmobile results. In his first year, Hegman secured both points championships in Junior 14-15 and Junior 16-17, and followed up in his second year by skipping Sport Lite and moving directly to the Sport Class claiming 4th in National points by seasons end.

The Hegman family has a lineage of bleeding green – Starting with Domenic’s grandpa, Tom (known as “Bumpa), amassed a nice collection of vintage Arctic Cat snowmobiles, gear and collectibles. The Arctic Cat passion was passed to Domenic’s dad, who will be his mechanic, and also raced for Arctic Cat in the late 90s and into the early 2000s. As a rookie in the Pro Lite class, Hegman will be fun to watch as Krajicek Racing helps develop his talent over the next two years with the team.

An early wrist injury last season sidelined Kolton from the Sport class as a top contender, but he will return this year focused with the competitive goal of cracking the top five. This young man utilized his time on the sidelines last season to mentor and give advice to younger riders competing at the National and Regional levels. It will be great to see Kolton back on track proving himself.

Owen is no stranger to Krajicek Racing as hes been part of their support rider program for the past two years. Owen competes in the Transition 9-13 and Junior 10-13 classes at the National and Regional levels. Owen took a step-up from the 8-10 transition class last season, raced hard and earned his stripes. Owen’s positive attitude is contagious and contributes to Krajicek’s team culture and success. Owen will continue racing out of his own trailer, but will work out of the Krajicek race shop in Brainerd MN with team mechanics.

Isaac raced all of the regional races last season on his 200 and secured second place in points. Isaac will return to a full regional series schedule on his 200 and may even enter the Transition class.